Positive news from the project 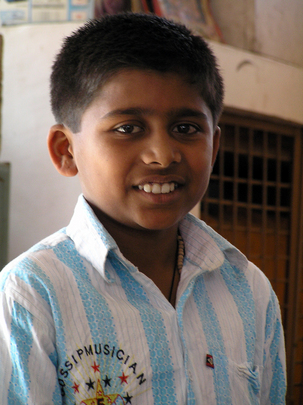 Thank you so much for supporting this project which I recently had the privilege of visiting.

Many of the children and families benefiting from your generosity live in a rather rural part of Maharashtra. Although only 150 miles from my starting point of Pune, the poor condition of the road meant a journey of several hours to reach a cluster of villages, displaced by the building of the Pimpalgaon Joge dam.

These villages represent one of the two key activity areas for the project, the other being the slum villages on the outskirts of the large town of Sangamner 70 miles away.

On first seeing the large expanse of water which has been created by the completion of the dam, I was fooled into thinking that this was a valuable resource which must be of benefit to the local community. I was wrong.

Underneath the water are the lost villages and fertile fields which once were home and larder to generations of this proud and previously self sufficient community.

At a village meeting, members of the local community painted the wider picture of the true nature of the significant negative effect of the construction of the dam.

The water for a start, I was told, is not fit for drinking without significant treatment. New villages have had to be established on the sides of the hill and the new land being claimed for agricultural use is unlevel and infertile. Until the project started, none of the households had drinking water or sanitation.

With no income through agriculture, the villagers have been forced to start day laboring. This work usually involves many days away from their homes and families, working long hours, for little pay, constructing and repairing highways.

Thanks to your support, I witnessed a JCB digger being used to level the land and so prepare it for agricultural use. The village I visited now boasts outside toilets for 80% of the homes. The same village now also has its own water supply complete with purifying system. I found it incomprehensible to think that these villagers had previously been walking for miles to find suitable water for drinking.

The mood of the village meeting was subdued as it is going to be a number of years before they will really know what the new land will produce. Having said that, there was certainly hope and much appreciation for the support they have been receiving from our donors for their village.

On reaching Sangamner I was fortunate enough to meet Sairaj, Prime Minister and his Ministers of the Pokhari village Child Parliament (beneficiaries of the project). Sairaj explained to me some of the issues facing children of the village, including malnourishment and school drop outs. He explained that the parliament meets weekly to identify issues and find solutions.

One significant problem, he explained, is that girls are being withdrawn from school early (aged 12 -14) and are not being allowed to complete their education.

The parliament devised a street play to show to parents. The play highlighted the problems of school drop out as well as the benefits of allowing girls to complete their education. Sairaj also explained that a representation party of the parliament visits families to understand their fears and encourage them to allow girls to complete their education.

The skills these children get from the Child Parliament are considerable. They learn how society operates, how village law works, how to engage with adults, how to present arguments, what their rights are and how to speak in public, to name but a few.

In all the projects I visited, these children, aged 11 to 16 years old were the most engaging, socially active and confident I met during my month long visit. Meeting these children gives me confidence that your generous donation is going to a very worthwhile cause. Thank you again for your continued support.

As a key stakeholder in this project, we would really appreciate your considered feedback. How could we attract more people to this project? What inspires you to support it? What can we do better?

The difference you are making is significant and really appreciated. Thank you. 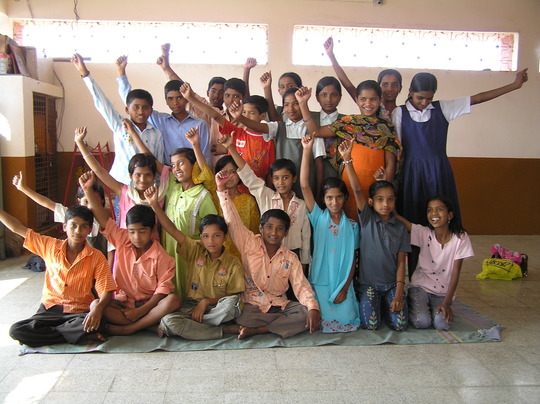 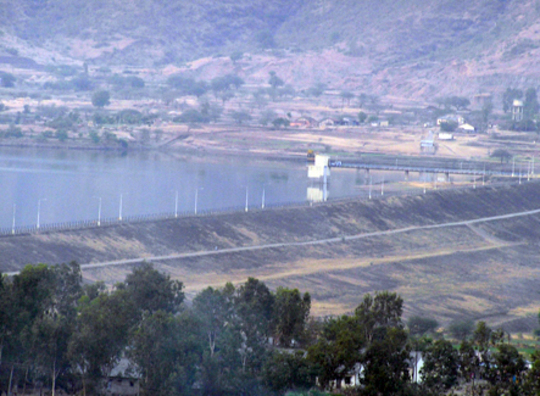 Having recently joined Karuna Trust I would first like to apologize for the delay in this report and secondly thank you so much for your generous support to date. I am pleased to say that as part of my induction I visited several of our projects in Maharashtra in March this year. This project was among those I visited and was the one that gave me the greatest inspiration. I met Manisha Tokale, the secretary of our project partner SPMM and many of the rest of the team. Manisha is such a powerhouse, fighting for the rights of Dalit women in the Beed district, that I have included a short profile on her in the attached report. I visited Padalshingi, one of the villages in which women are benefiting from the project's work. Seeing the expressions on the faces of the women being addressed by Manisha was my main inspiration. I was told that the women of the village had previously had no role to play in village decisions and now they are leading the change themselves. I have mentioned in the report that this one village now has 25 women's support groups, which means that around 400 women are directly benefiting just in that one village. I have also included the case study of Alka Masukale who has started her own small scale enterprise as a result of the project. I was particularly impressed with the structure and organization of the project. Training plays such an important part in delivering the activities and the project is ensuring that new women leaders are being recruited and trained all the time. Of course the women's groups are one part of the work, the other, more graphical side of the project's commitment is to support Dalits who experience violence. The project team talked me through some of the atrocity cases they have been involved in and I have included details of an attack against two young women Diksha Ashruba Shinde and her sister Panchshila who the Flying Squad have assisted. At the end of the project I have included a table which details the project's results against the objectives of each activity. I have also attached our latest Newsletter, which includes the story of Sanjivani Pawar (Beyond Fear) a beneficiary of this project. After the death of her husband Sanjivani lost her land and experienced sexual harassment from the men of the village. Since becoming involved in the project she has successfully won a Land Rights battle, is leading one of the women's self help groups and is a leader within her village. Thank you so much for you on going support. Your generosity really is making a difference to the lives of women experiencing discrimination, sexual harassment and social exclusion.

A Classroom among the Clouds

How your support is helping to fund educational centers for the children living in some of the highest altitude settlements in the World.

For Thondup Tsering, home is an encampment of rough woolen tents huddled together on an arid, windswept plane surrounded by towering mountain peaks nearly 17,000 feet above sea level. He belongs to a nomadic tribe known as the Korzokpas who live by grazing their herds of goats and yaks on the high altitude pasturelands of the Chantang Plateau, part of the Indian Himalayas close to the border with Chinese occupied Tibet.

The nomadic life is one of almost unimaginable hardship. In the summer months the nomads trek with their herds up to the high altitude pastures; in the winter retreating down to the lower slopes to escape temperatures that go down to minus 50 degrees. In all, the community of 700 men women and children move camp 14 times a year, making it extremely difficult for the children to receive an education.

Until a few years ago there was a government school five km away in the nearby town of Korzok but in winter the whole area is completely snow bound and shut off from the rest of the world. Eventually the school was forced to close down because the Government couldn’t find teachers willing to work in such extreme conditions. Now the older children go to a boarding school more than 60 kms away, while the younger children travel with their parents helping tend the livestock as they move from place to place in an annual cycle, across an area covering more than 60 square kms. . About two years ago, a Delhi based organization called Pragya started working with several of these nomadic communities, to provide primary education for the younger children - the result, mobile learning centres: simple primary schools staffed by members of the nomadic communities, that provide basic education for the children as they migrate with their parents from place to place. The learning centers are housed in large canvas tents and are equipped with books, wall charts, blackboards and educational toys and games that can all be folded up, stowed away and carried on the back of yaks to the next grazing ground. The whole school collapses down into heavy duty red plastic crates which are also used by the children as desks. During the summer months classes go on up to 17,000 feet making this perhaps the highest school anywhere in the world.

Thondup Tsering is the main teacher in this mobile school. He has lived with this community all his life and is passionate to ensure that the children get as good a start as possible, helping safeguard the future of this community and their traditional nomadic lifestyle.

“These children are our future. Its crucial they get an education; that they can read and write a little bit and have at least basic numeracy . Otherwise they’ll spend the rest of their lives being exploited by traders from other communities, and end up picking up other people’s garbage.” . The classes run for two hours every morning giving the children enough time to help their parents with milking and shearing the animals in the early morning and late afternoons. The children love the classes because the centre is equipped with a range of toys and games designed to enable them to learn through playing- brightly colored jigsaws, board-games, puzzles, counting boards, skittles, plastic cricket bats, footballs- the school boxes are like treasure chests to children who would normally not have access to any toys at all.

“I love teaching here. It’s wonderful to see the children playing with these toys; you can see how keen they are to learn! I feel a great sense of satisfaction that I’m able to contribute to the future of my community in this way. I only wish it was possible for me to do more.”

But Thondup is realistic about the future for his people. The nomadic lifestyle has been going on here for thousands of years-maintaining a delicate balance with this most extraordinary of environments and passing on traditional Buddhist values from generation to generation- but now it is slowly dying out as more and more people drift to the cities in search of a more stable income and more tolerant living environment.

“It may be that our nomadic culture will not survive for more than another generation. But without an education what will be the alternative for these children? We are giving them an education so that at least they will have some opportunities. The future belongs to them; they should be able to make a free choice about how they want to live.”

‹ 1 ... 94 95 96 97 98 99 100 101 102 ›
WARNING: Javascript is currently disabled or is not available in your browser. GlobalGiving makes extensive use of Javascript and will not function properly with Javascript disabled. Please enable Javascript and refresh this page.