Resiliency Paid Off- Survivors Continue to Have Food and Start Earning

In our last update, the project partners set to bounce back after being hit again by super typhoons Senyang and Ruby that struck Tolosa Leyte last December 2014 days apart from each other with a fury resembling the deadly windspeeds and storm surges of Yolanda. Undeterred , survivors wasted no time and restored damaged garden plots and common production areas ravaged by massive typhoon-borne floods. SIBAT doubled time in assisting survivors through follow up trainings, distribution of new vegetable seeds and ground technical advisory work. Finally, the project partners are reaping their hard-won produce. Food continues to be on the families’ table. Some surplus produce are sold. Now, family supplemental income starts to trickle in.

To date, family gardens are getting an average of half to one kilo per week of leguminous crops such as beans primarily for household consumption. Fruit bearing crops such as tomatoes, eggplants, ladies’ fingers, squash, bottle and bitter gourds are consumed at the household. But some extra kilos of produce are also being bought by some community households. Consumers from adjacent barangays start coming in and buy their supply from the producers.

Becoming Part of the Value Chain

The food production campaign meant to build self-sustenance after food relief would run out in the immediate aftermath of Yolanda created a significant chain in the local food supply. The local government lent their support by rallying constituencies to be active participants of the food production campaign initiatives and availing their facilities for trainings and workshops on sustainable farming. Adjacent barangays, inspired by the example plan to replicate the program in their own jurisdictions and sent representatives to follow- up trainings conducted by SIBAT on sustainable food production as a start.

Aside from overcoming the odds of the recent typhoons, the long dry spell in the recent summer months threatened veggie production and recovery efforts. The intense high temperature dried up soils and water sources dwindled and becoming insufficient for crop needs. This is where sustainable agriculture technologies beat the challenge. Open pollinated seeds used as opposed to the hybrids applied with biofertilization managed to survive and bore fruit despite reduced soil moisture. Foliars made of bio- decoctions aided by indigenous micro-organisms creating fruit-plant juices and emulsions serving as plant conditioners helped maintain robust plant growth. The use of bio-fertilizers particulalry "bokashi", a Japanese biofertilizer type  combining carbonized rice hulls, rice bran, cow manure sprinkled with indigenous microorganisms decoctions for rapid decomposition augments soil fertility.  These ingredients reduced the high vulnerability of the crops to low productivity and have strengthen their physiological structure to withstand the vagaries of intemperate local weather conditions.

Important Tool To Rebound From Disasters

This experience attested to the viability of some of the principles of sustainable farming methods as regards adapting to climate change and the hostile shocks of its effects especially in securing the primary food needs of victims. By now, the survivors who were farming during pre-disaster practices using chemical methods have seen the benefits and advantages of the organic or sustainable farming practice. Their acquired knowledge and skills have become important newly acquired tools which they can apply and innovate in any given post-disaster conditions especially that they lie in a typhoon belt area . Hence this new knowledge and capacity also boost their sense of security and confidence to build back from the rubbles of any disaster that may crash them. Definitely this will be more effective if done collaboratively with other groups and organizations.

In the last update, the communities are preparing to level up production and plans to create surplus for the market. They plan to engage themselves towards social enterprise by selling their produce in conjunction with other partner organizations organizing a local trading and marketing support. Currently, the producing communities are working on the legal requirements to make their endeavors official.

A solar powered water system to be installed in Baranggay Cantawiris is still on-going. This is part of the renewable energy-based water rehabilitation system for potable and domestic use. Social preparations is continually undertaken especially orientation on solar water pumping system and developing a community-workplan that will involve community members in the implementation of the project.

Through this, we hope the initial steps and capacities undertaken will continue to equip  the survivors with the capacities and opportunities  to stand on their feet again.

Hit Thrice And Bouncing Back Despite 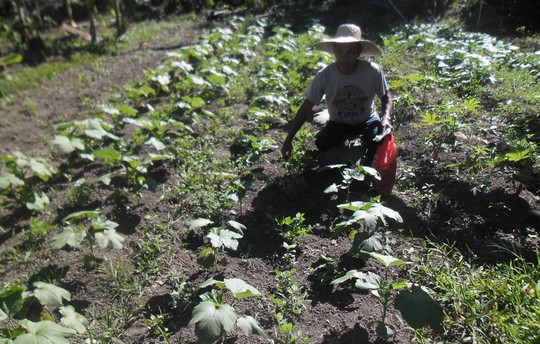 A farmer shows off his plotted vegetable garden

The first was typhoon Haiyan in 2013, and just as we celebrated its first anniversary in November 8, 2014 wishing for this never to happen again, two successive typhoons hit Samar and Leyte in Central Philippines once more. Typhoon Ruby came first and unleashed its fury just before Christmas and typhoon Senyang just before we ushered the new year 2015 late in December. These two typhoons came just days apart on the same month.

While typhoon Haiyan packed up winds speeding over 300 kph and brought storm surges causing swirling sea water to rise up to 8 meters and smashed land pulverizing everything on its path, Ruby and Senyang though slightly slower than Haiyan carried more rain causing massive floods and fatal landslides. All communities in Tolosa involved in the SIBAT-Global Giving food, water and energy projects were submerged in water. The steadily progressing food production and water rehabilitation work that gained ground would have to go back to square one again. This at least in terms of reconstructing demonstration farms, acquiring new seedlings to plant anew, soil re-fertilization after newly recovered healthy top soil were again washed out by the floods. Water wells would have to be assessed again that might need redrawing and reconfiguration of the distribution system.

We were quite happy then that the typhoon months usually from June-September didn't have any serious storms and thought this year would pass with a gentle breeze and typhoon-path areas can take a breather. But climate change that kept on distorting the weather patterns across the globe can really spring unwelcome surprises. Before the year ended, two successive typhoons bid 2014 goodbye with a swath of devastation brought about by floods and landslides killing some people. It did happen just when Haiyan victims have learned the rudiments of non-chemical food production technologies and have started creating their own food and conquered queuing for food relief.

Most households are already benefiting from the food they produced from leafy, fruit-bearing, climbing and root crop vegetables beginning midyear in 2014.  Rice growing has never been productive with the introduction of the System of Rice Intensification (SRI). Bio-intensive gardening has been continually introduced and adoptive by households. Communal farming has become alive creating not only food for every home but fostered as well camaraderie, cooperation and unity among community members. It renewed back a sense of ready helping hands available in times of calamities and related disasters. With the damage wrought by the two typhoons...the communities would have to pick up the pieces again and redo much of what they have already started and move again forward.

From building their capacities on food production technologies, the communities have formalized their participation in rehabilitation work and solidified this cooperation through creation of vegetable growing associations.

To date, the following organization in the affected areas have been formed, namely:

Organizing work is being continued for other communities to formalize themselves to continue rehabilitating their food bases and prepare for the next eventuality.

There will be additional trainings on various Sustainable Farming Technologies that will be conducted. With typhoons Senyang and Ruby damaging the earlier production farms and gardens established we need to distribute seeds again for leafy, root crops and cereals like rice and corn as staple crops.

It's worth noting that some of these organizations are moving on towards social enterprises such as processing some of their produce like bananas into chips and community-based production of organic fertilizers to serve the needs of other farmers.

The two recent typhoons may have se them back momentarily, but we are aiming to design a more climate resilient production processes by integrating buffer zones through planting of additional trees in flood pathways, develop off farm seed storage for back up and continue disaster preparedness activities and incorporate these into the daily production work. 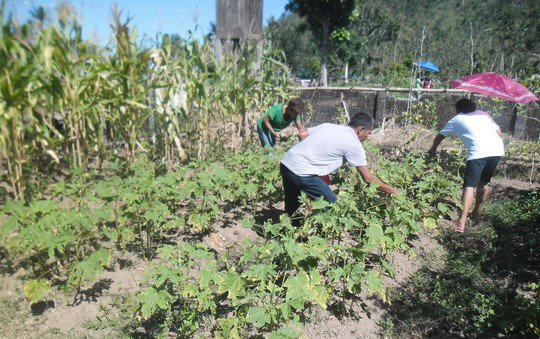 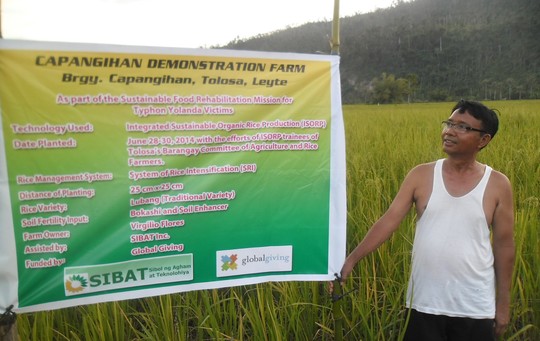 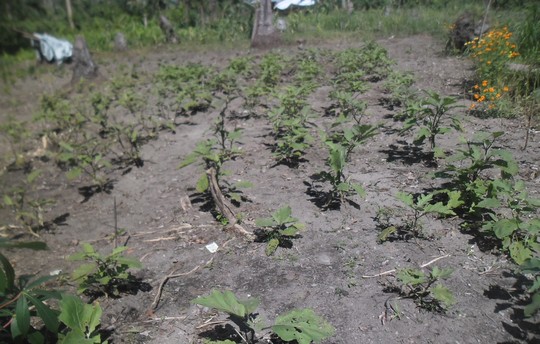 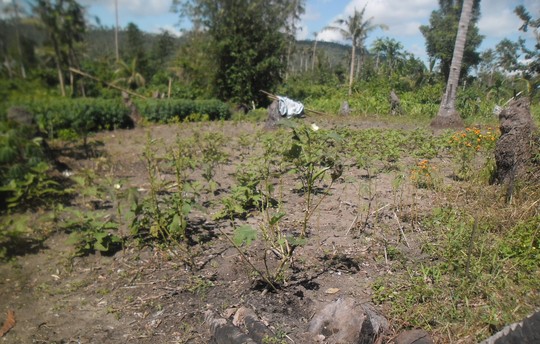 Self-produced Food After Relief Has Gone

It's been a couple of months back this 2014  when SIBAT started to prepare the affected communities for post food relief situation by training members of the 15 barangays of Tolosa Leyte to produce their own food and sustain their potable water systems through renewable Energy.    The 15 focus barangays are Burak, Capangihan, San Vicente, Malbog, Cantawiris, Olot, Burak, Quilao, Tanghas, Telegrafo, Opong, Canmogsay, Olot,San Roque and Poblacion proper.

From June to September, intensive trainings were conducted for production of two main crops, namely, rice growing and diversified vegetable production.  A total of 198 trainees took the trainings, 92 are regular farmers and 86 are secondary cultivators being barangay officials, health workers, nutritionists and  teachers.  The latter group were tasked to integrate the sustanable food production know how into their respective constitutencies as part of continuing restoration work in agriculture and food sufficiency while rebuilding work progresses. These are done through establishment of a common production-demonstration farm collectively managed by the comnunity members and through individual farmer cooperators adopting the production technologies as models in their respective farms.

The Integrated SustainableRice Production (ISORP) were introduced to revive back rice farming for the 11 rice growing barangays under a non-chemical farming system.   To date 44 farmers from these barangays adopted ISORP that features organic fertilization of the soil, use of improved rice varieties instead of hybrids, intermittent irrigtion and straight line method of planting to optimize sunlight.

Vegetable Food Production were pursued and formalized by two barangays through formation of vegetable growers association, a first in the history of the farming community.  These are the Vegetable Growers Association (VGA)of Brgy. San Roque with 43 members and the Quilao Organic Farmers Association in Brgy. Quilao  (QOFA) with 17 members. For the 12 barangays, tools were distibuted with a set each or rotary weeders, rice harrowers ad rice hull carbonizers.

With the efforts, the families were able to provide and have access to vegetable food supplements, revival of soil health and seed improvement.  Potable water through photo voltaic or gravity-applied distribution system is still a work in progress with the limited resource for full rehabilitation work.

Monitoring, technical advisories in continually building the community through their farmers association is a regular task undertaken to sustain and improve initial efforts