"Lappat" is Our Resiliency Anchor 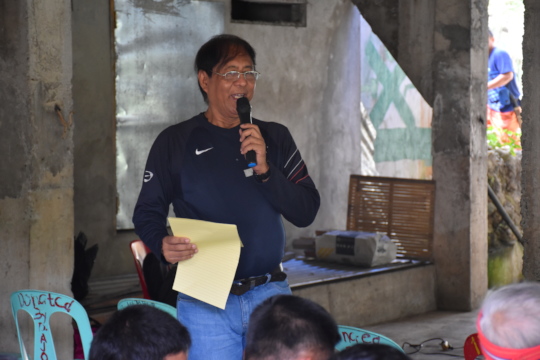 one of the lectures

As mentioned in the last report, we are preparing for a series of resiliency  workshop orientation with the CBRES communities to  provide them with greater awareness on the risk associated with climate change and what can be done  at least at their levels to mitigate its adverse impact.

Last November 11-14,  five (5)  CBRES communities (Pacgued, Dulao, Malibcong, Kili,Buanao)  represented by  3-5 community members totaling  35 people gathered at the Brgy Hall of Baranggay Kili, Tubo, Abra  to listen and learn about climate change and its consequences such as virulent storms causing floods, erosion and damage to crops and properties  that destroyed their microhydro systems recently.  The community capped the activity with a workshop about action plans to address the climate change concerns. The training venue is about nine (9) hours drive from Manila.

The  various topics  included  orientation on climate change and the reason behind this phenomenon, the aspect of climate change justice followed  by the concepts and principles of appropriate technology.   Being  farming communities , the  practices of sustainable agriculture technologies were also presented these  being deemed as significant mitigating  components to reduce vulnerabilities and risks associated with the vagaries of erratic climate patterns.

When asked how the communities would address and minimize their  damage exposure to destruction from storms, flashfloods and erosion as a result of climate change ,  almost everyone agreed  from the results of their workshop that  their Lappat System  is key to their survival. It is their resiliency anchor amidst the continually distorting climate structure.

The “Lappat” System is a customary law that governs the protection, utilization and sustainable management of their water, land and forest results and the built- in flora and fauna living within these environmental domains.   For indigenous peoples, their web of life  rest on the stability of their forest reserves, rivers and streams and  ancestral land itself.  Lappat is their mechanism  to ensure that these main resource components are  at equilibrium.  There are strict rules on cutting and replanting trees and stiff penalties for violators, seasons for  hunting and gathering games and even instituting sanctuaries on their rivers and streams  to sustain fresh water fish and other aquatic food resource availability.    As they learned during the   orientation workshop how the forest serves as nature’s lungs that assimilate carbon and gives off oxygen, the more they resolved to double efforts  on  forest protection enforcement.

As to other mitigating measures aside from the “lappat” system, they committed to interface with the local government for local policies and programs  for climate actions.

As for SIBAT, we will continue building robust systems and to hopefully respond to immediate calls for trouble shooting of system to avoid further downtimes and systems power failures of the hydro systems. 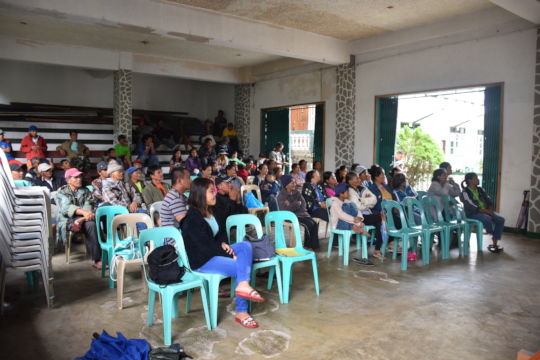 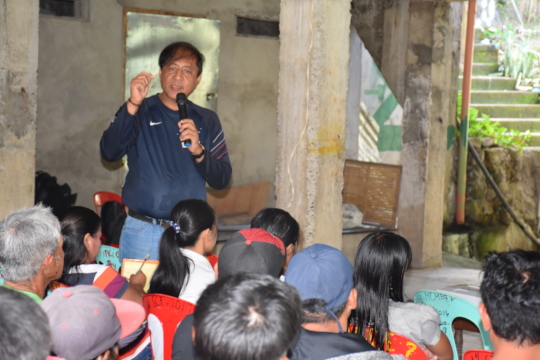 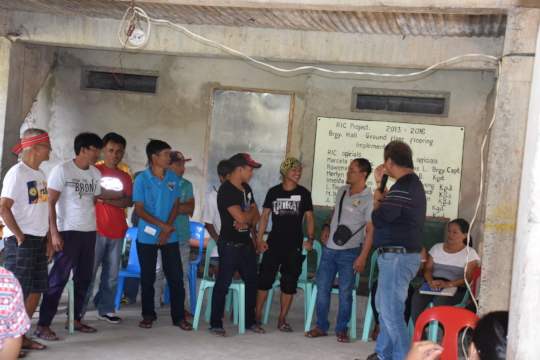 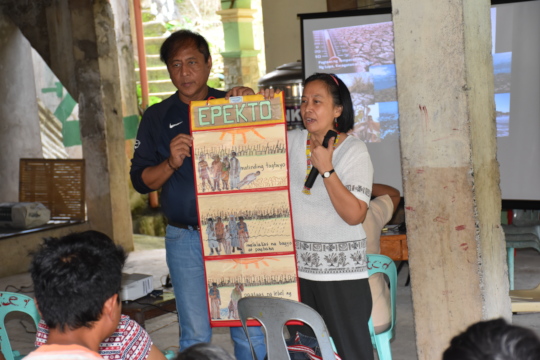 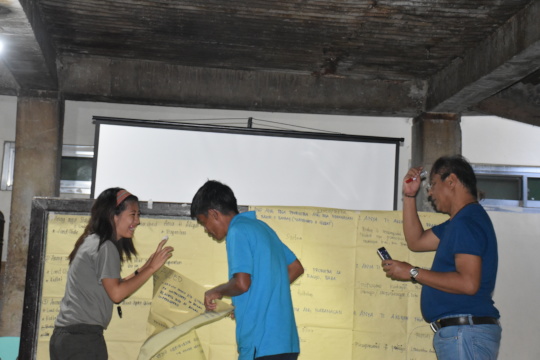 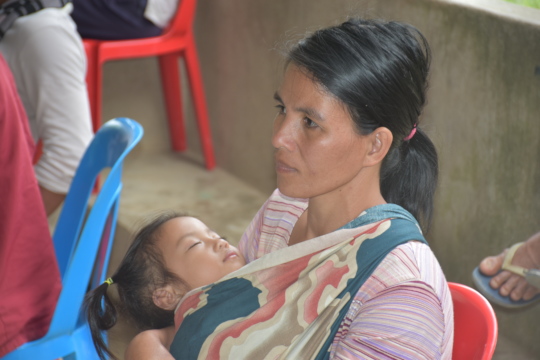 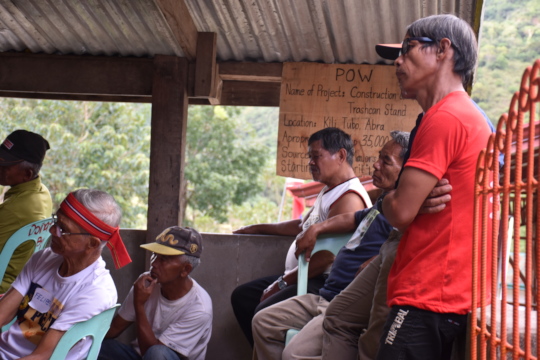 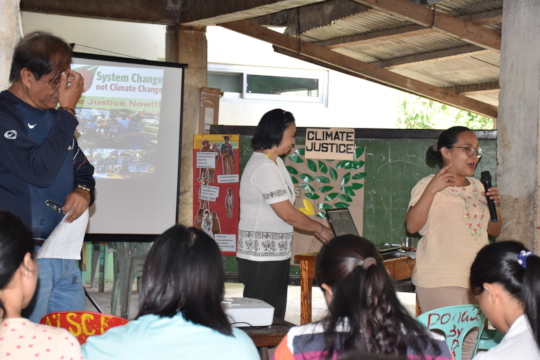 Priming Up for Resiliency 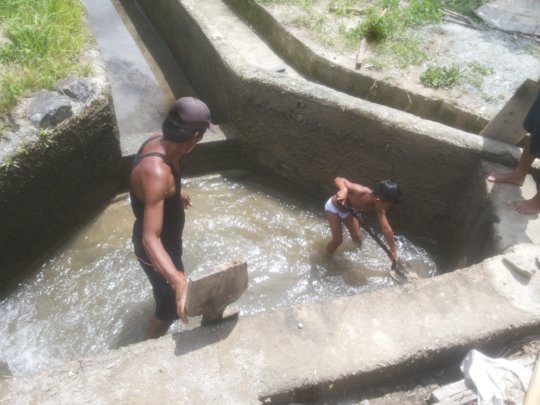 With typhoons coming in during these months, the intial rehabilitation work of the power canals, power houses and electromechanical devices are ready against the odds and are now holding on.

The  MHP communities are now geared to the finishing touches of the civil infrastructures while SIBAT's engineers are double checking the functions of the reinstalled   electromechanical components.

It's worth noting that  the communities are now fully aware as regards strengthening  the infrastructure built  to come up with robust systems.  The downtimes suffered when the systems were broken by floods and erosion  put a lot of strain  to the women who have to revert back to manual pounding of rice, and students resorting back to wick lamps and pithwoods when needing extended study time in the evening.

Those who are putting additional appliances like TV sets and radios missed recreation and recharging time.  Losses were incurred by those enterprising community members especially the ones selling cold water  and drinks  with their refrigerators shut down.  These strengthened their resolve to realign systems design, civil works and electro mechanical components  to withstand typhoon stresses as much as possible.

By next month, with additional support from Global Giving, the commnunity will embark on a series of workshops and trainings around resiliency and preparedness work on top of emphasizing the physical and hardware elements of the systems. This is putting specificity  now on the software side of mitigating disaster which is as termed at present  the new normal  where  the indigenous microhydro communties, shocked as they are of the force that damage the systems are learning to battle up.

More updates from the results in the next updating  and we thank you for continually supporting these community efforts through Global Giving. 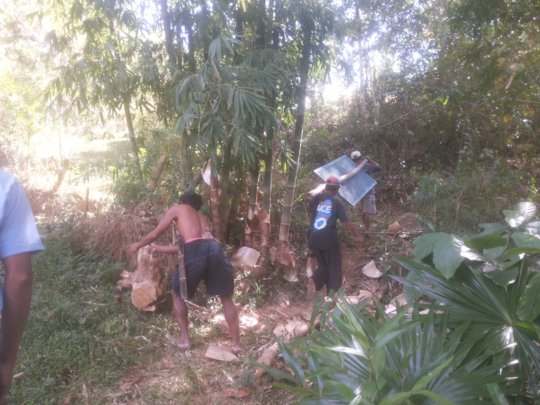 carrying the trash rack to the forebay 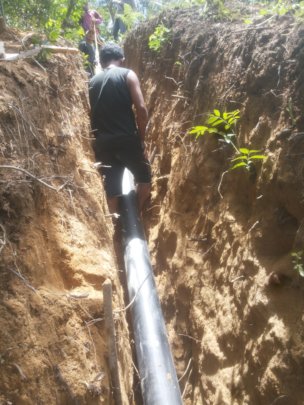 Up and Running Again 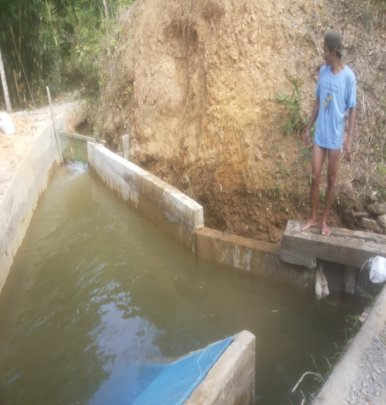 concreting of the forebay to withstand flooding

After months of rebuilding canals, power-houses, forebays and  re-intallation of new electro mechanical devices, four (4) repaired MHP systems in four villages respectively are  up and running again. This means the MHP communities are  lit up again and rice mills  grinding  new rice harvests.

Here are the four MHP sites that were fully rehabilitated .

To recall, the  MPH was built on 2007 serving two adjacent upland barangays such as Umnap, Buanaoand  Sitio, Cubcuba, The system used by the MPH observes the lappat – a traditional forest conservation and management scheme for environmental sustainability.

Its MHP has been properly managed by the communities. As a result, the system has been functioning efficiently until typhoons Manghut and Rosita damaged it.

With the donation from GlobalGiving, SIBAT fabricated a three phase electronic load control (ELC)  used to balance the power demand with the power generated by the Micro-Hydro turbine. The unit fabricated and installed by SIBAT engineers is in collaboration with EWB-UK.

The forebay  was concreted to  ensure the continuous supply of water to the turbine to avoid electricity interruption. Also, a  trash rack fabricated  at  SIBAT’s  machine shop called CRETech or Center for Renewable Energy and Appropriate Technology Center was installed as well to filter debris.  This will avoid the intrusion of sediments and debris to turbine that contributed to the wearing  out of the turbine  runner.

After the typhoon, the generator of the MHP of this village  was damaged due to mud intrusion inside the powerhouse. This affected the supply of electricity and totally stopped the system. It took three months to restore  the electricity. In collaboration with Mataragan Micro Hydro Power Association (MAMIHPA) and SIBAT, the old generator was replaced with a new one and likewise installed to the site.

The typhoon hit badly  some civil components of the MHP system specially the power canal and the turbine inside the powerhouse. Like the other heavily silted system, the runner of the turbine was damaged and totally stopped the supply of electricity. Because of this SIBAT made an effort with GlobalGiving funds to fabricate a new turbine and was finally installed.  Electricity again was  produced lighting households and  powering agricultural machineries

The community has 18 households with a population of 80 people  connected to the system with a capacity of 8kW.  This was commissioned in 2009. The alternator was damaged by the typhoon and SIBAT replaced it with a new one together with replacing the worn out bearing of the turbine and repair of the grounded circuit breaker inside the powerhouse.

With all rehabilitation efforts and GlobalGiving’s support, electric power and water supply have been fully restored and serving the communities.

This is to thank all your support channelled through GlobalGiving. The parts, components and civil works were ensured to be of robust materials and construction work  to withstand another onslaught of damaging typhoons…but we hope these sites that have survived with their  water and electricity back would be spared from another typhoon fury in the coming years. 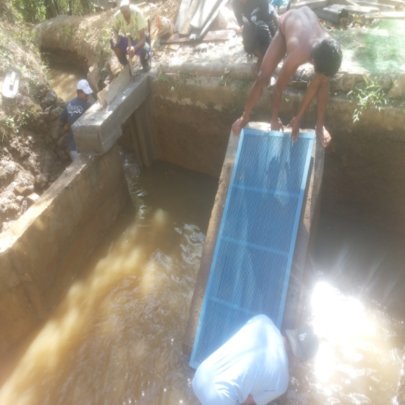 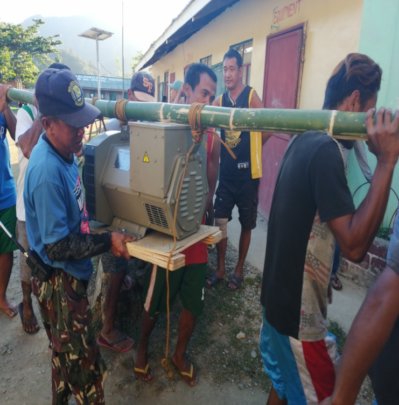 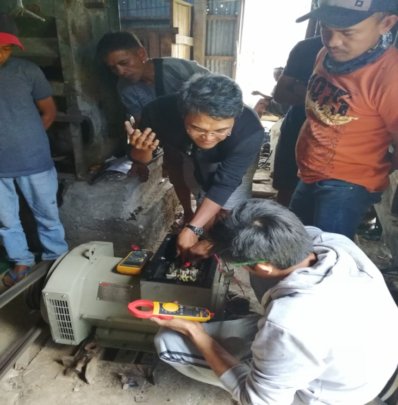 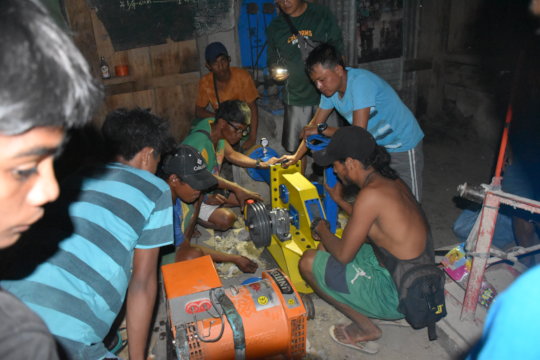 installation of the turbine 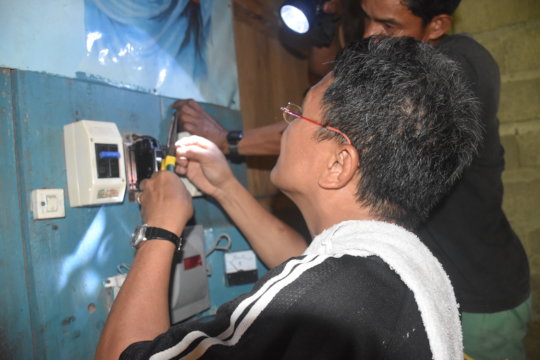 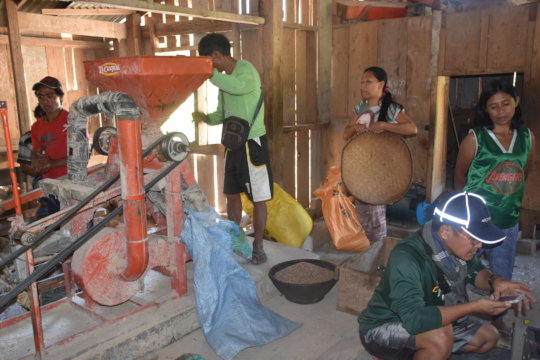 women are happy their rice mills are working again 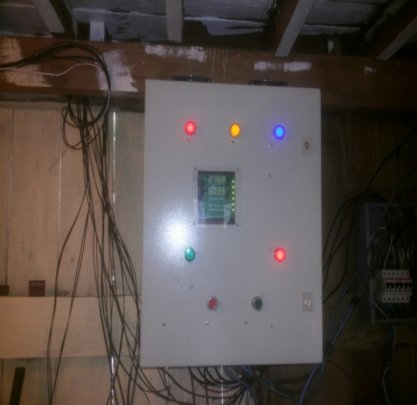 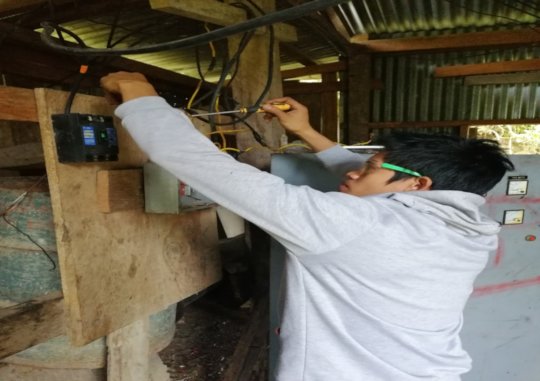 technician rewiring connections at the powerhouse 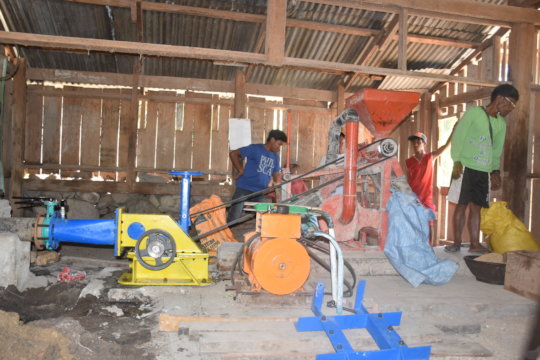 cross-checking the MHP Powered Rice Mill
‹ 1 2 3 4 5 6 7 8 ›
WARNING: Javascript is currently disabled or is not available in your browser. GlobalGiving makes extensive use of Javascript and will not function properly with Javascript disabled. Please enable Javascript and refresh this page.