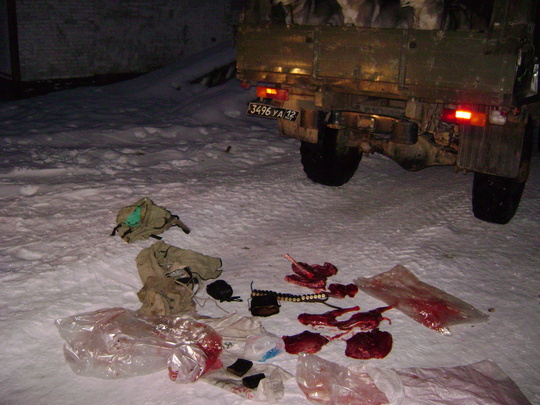 Yesterday, December 20, a group of poachers was detained during a routine patrol by the South anti-poaching team in Leopardovy Wildlife Refuge.

According to a senior inspector of the South AP team, at 6 p.m. the law enforcement officers stopped a car inside the protected area. It turned out that three passengers with dogs were returning after illegal hunt in the refuge. The violators, citizens of Slavyanka town, had three rifles and dead roe deer in the car.  They were taken to Khasansky police office where a criminal proceeding was initiated.

For the third time since November 2010 a criminal proceeding has been initiated against poachers thanks to concerted actions by the South AP team of Leopardovy Wildlife Refuge.

Earlier, on November 26, after a 4-hour pursuit the South team apprehended two poachers in possession of a 7.62-gauge rifle and a wild boar carcass.  On the 12th of November the team found footprints of three trespassers and after a 2-hour chase detained one of three violators.

The anti-poaching work of the Kedrovaya Pad Nature Reserve and Leopardovy Wildlife Refuge is financed by Phoenix in cooperation with International Fund for Animal Welfare (IFAW) and other partners. The two protected areas represent a habitat for two endangered felines – Amur tiger and Amur leopard, listed in the Russian Red Book, International Red Book and Appendix 1 of CITES Convention. The world conservation community is deeply concerned about the state of these species populations. 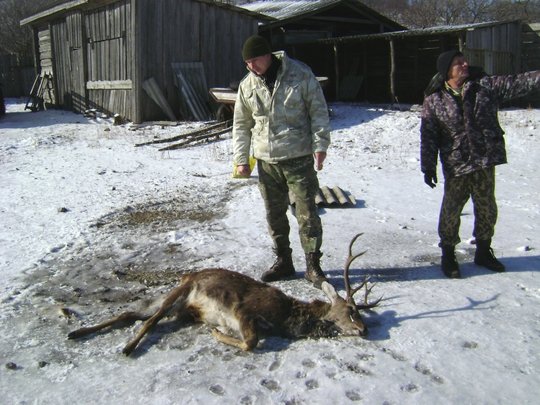 On November 28, the experts of the South team of Leopardovy Wildlife Refuge and Kedrovaya Pad Nature Reserve went to a deer farm situated in the vicinity of the protected areas to investigate a case of livestock depredation.

Earlier the deer breeder informed the inspectors that a leopard had killed a male deer at night time on the territory of his farm. A dead animal carcass was found in an internal enclosure, approximately 100 meters from a warden's hut. A guard found the dead deer early in the morning when he was going round the territory. The leader of the South team Eugeny Stoma inspected a scene carefully and concluded that there were two night guests, most probably a female leopard with a paw size of 6.5 cm and a male offspring with smaller pads. A back part of the dead deer carcass was partially eaten, several bites were noticed on the neck.

Next morning brought the good news. The leopards showed up again to finish their dinner and got caught on camera traps set up by Eugeny Stoma right by the hunted prey. Such appearance is rather rare and gives the specialists lots of useful information about the few Amur leopards that live in the south of Primorye. Unfortunately, the abundance of predators on photographs was caused by overlay of several frames. To find out more about the night “hunters” Eugeny and his team decided to follow their tracks on the fresh snow. After closer investigation it was discovered that the tracks apparently belonged to adult leopardess and her two cubs. Hopefully, now they are satiated and well protected.

Recently, we have met Sergei Khokhrykov, director of Kedrovaya Pad Nature Reserve and Leopardovy Wildlife Refuge who shared good news with us: “Tracks of four leopard cubs were found in fresh fallen snow inside the protected areas. Presumably, a female resident leopard with two cubs live in Kedrovaya Pad Nature Reserve. Another female leopard with two cubs likely inhabit an adjacent area. Also, there are two females with one cub each. All in all, there are four leopardesses and six cubs roaming the protected areas and abutting territories ”. This news is extremely encouraging for conservationists and people concerned about the fate of Amur leopard and shows the first results of improve protection in Southwest Primorye. We hope that during this winter survey, which is to be held in late December-January, the specialists will count more leopards than in previous years.

Let us again express our sincere appreciation for the donations that make protection of the Leopard Land possible! 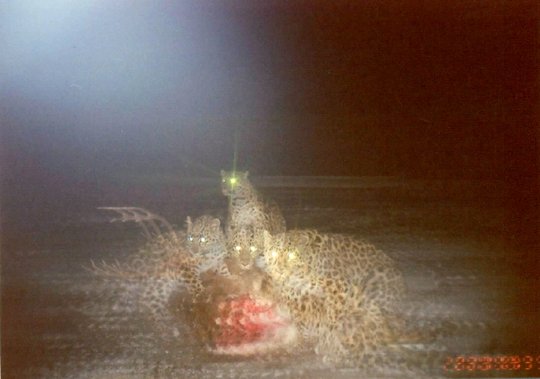 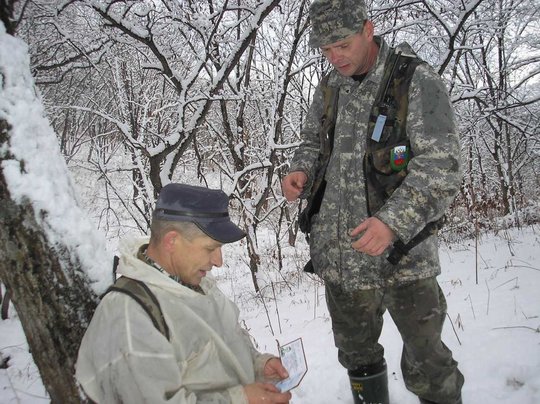 Many thanks to everyone who has contributed to our leopard conservation project.

Since this is our first project report, in addition to sharing updates on our leopard conservation project GlobalGiving.org donors are supporting, I would like to offer you a bit of background on the area we live and work in. Primorsky region in the south of the Russian Far East is a biodiversity hotspot; it also has the most ramified system of protected areas. With the purpose to save the remaining population of Amur leopard and the western sub-population of Amur tiger the Russian Government created Leopardovy Wildlife Refuge in the southwest of Primorye, merging two regional refuges into one federal and affixing it under supervision of the Kedrovaya Pad Nature Reserve. The refuge is located in the core area of tiger habitat, and has a big potential for increasing both tigers and leopards and their prey populations, on condition that anti-poaching control is maintained on the permanently high level.

I would like to thank all GlobalGiving.org donors for their generous support. In the last three months we provided our anti-poaching teams with fuel, field expenditures and rechargeable batteries for communication means so they could operate in the field on a regular basis. Here are the latest news from the field:

It is known that a hunter always goes to hunt during or after a fresh snow fall because it is easy to locate animals' track in fresh snow. And fresh snow attracts not only licensed hunters, but also poachers. That is why during the first snow fall in Primorye our anti-poaching teams set off for a patrol to prevent poaching inside the protected areas and adjacent territories. On November 12, 2010 while motorists were dealing with first snow on the roads of Vladivostok city, passionate state law enforcement officers of Leopardovy Wildlife Refuge and Kedrovaya Pad Nature Reserve were patrolling to prevent and reveal wildlife crimes. First snow resulted in first criminal cases in this snow season.

Eugeny Stoma, leader of the South team, informed that when patrolling the area they spotted footprints of three people entering the wildlife refuge. After a 2-hour pursuit, one of the trespassers was detained. The detainee turned out to be a local from a neighboring village. He had a 7.62-gauge carbine. There was no shooting, thank God. Bad news is that his two fellows managed to escape. The detained violator was taken to a local police station to initiate criminal proceedings. We hope that further investigation will identify the two men involved in the crime.

The North team also had good results that day. While patrolling the northern part of Kedrovaya Pad Nature Reserve, the guardians in cooperation with police officers arrested three men for illegal hunting inside the protected area.

These patrols were a success thanks to your support!

We look forward to sharing more updates with you soon!

‹ 1 ... 37 38 39 40 41 42 43 44 45
WARNING: Javascript is currently disabled or is not available in your browser. GlobalGiving makes extensive use of Javascript and will not function properly with Javascript disabled. Please enable Javascript and refresh this page.