Patrols in June and July 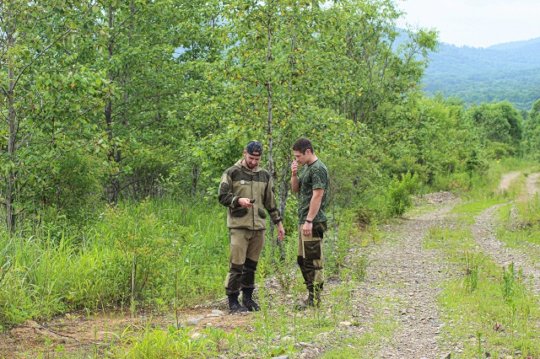 Dear supporters, below we present you the report on activities of the law enforcement team protecting the Amur leopard habitat. We thank you for your donations that made this work possible!

In June 2019, the team of central subordination carried out 26 anti-poaching patrols and made ambushes in order to deal with poachers who hunt deer over salt-licks. A new ranger, Evgeny, joined the team on June 17.

On June 8, the team together with the Northern team set forth on a multi-day patrol during which the rangers patrolled on foot and made ambushes around salt licks. They made a stop near the Nezhinka River.

On June 9, the rangers heard a sound of engine and made an ambush. Later on, they saw a vehicle approaching the ambush site. The rangers made an attempt to block the road and stop the vehicle, but the violator was not about to stop. Instead, he continued driving his car and even hit one of the rangers. Luckily the ranger was not hurt seriously. The violator speeded up, destroyed the blockage, and disappeared. A criminal case was initiated according to the article 318 of the Criminal Code of the Russian Federation. The violator and the vehicle were identified.

On June 11, while patrolling around Bamburovsky firing range the team discovered a hemp field and a salt lick. It was decided to set a camera trap close to the hemp field in order to find out who had a hand in those illegal activities.

On June 11, the team discovered a salt lick that was frequently visited by wild animals. It was decided to carry out surprise visits there on a regular basis. Up to date, no violators were spotted there.

On June 25, the team saw a car parked near the border of the Land of the Leopard National Park. When the rangers came closer to the car, a drunken man got out of it and asked the rangers not to go into the forest. The rangers decided to check what was happening in the forest and followed the foot prints. When they heard a sound of a chainsaw, they thought that illegal loggers were working there. But later, the rangers met hivers who were mowing round the territory. As it turned out, they had approvals to work there.

In late June there was rainy weather, therefore the team mostly patrolled by vehicle and made ambushes near the rivers.

No conflict cases between people and big predators were recorded.

In July, the team continued patrolling the assigned territory in order to prevent and reveal any crimes there. The rangers carried out 26 anti-poaching patrols. During the month, the rangers mostly made ambushes and patrolled on the Narva and Poima rivers. Also, the team monitored the territory of Kedrovaya Pad Nature Reserve in order to prevent ginseng root gatherers to enter the protected area. Probably due to showery weather in July no ginseng root gatherers were spotted. A few camera traps were installed by rangers at salt licks, but no violators were detained. Water level of local rivers increased due to incessant rains, therefore the rangers paid special attention to Narva, Poima and Barabashevka rivers.

On July 13, the rangers discovered a broken lock which was placed on barrier gates crossing a path towards the Narva River. It was decided to make ambushes there, but no violator was apprehended.

While patrolling along the Narva River, the rangers discovered a salt-lick and decided to make ambushes there. They spent a few patrol days there, but no violators were spotted. No violator’s footprints were found. A camera trap was set up andhidden in order to get a better understanding of what goes on there. 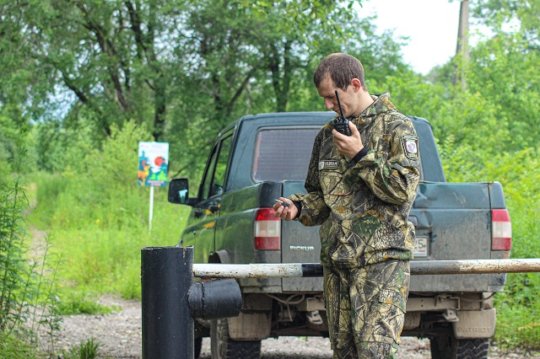 The released tigers are doing well

According to the Amur Tiger Programme the tigers Pavlik and Yelena, who were released in the Amur taiga on 23 May 2019, have been successfully adapting to their new home and hunting actively, as experts of the Amur Tiger Centre, the Khingan Nature Reserve and the Amur Region’s wildlife protection directorate concluded after the first field check of the reintroduced tigers’ location. The data were received from the animals’ GPS collars.

It was confirmed that both tigers had successful hunts, Yelena killed a wild boar and a badger and Pavlik caught two badgers, a roe deer and probably a moose deer.

Deputy director for research at the Khingan Nature Reserve, Vyacheslav, said that both tigers are still in the Amur Region, where they were released into the wild. Yelena is at the heart of the reserve, and Pavlik is currently moving along its southwestern border.

“Yelena now lives in nearly the same area where the tigress Ilona resided for a long time: a high-altitude part of the reserve, with good prey. In addition, an adult male tiger has been visiting this area regularly for several years, so the young tigress has a chance to mate and give birth to her first cubs, thus increasing the population in the reserve. It is a good question whether Pavlik remains in the reserve, because all the tigers before him didn’t spend much time in the area and left for other places. Time will tell if Pavlik will follow their example. We hope not,” Vyacheslav said.

Head of the preservation department at the Amur Region’s wildlife protection directorate Valery, noted that tigers do not roam very far from the place where they were released. He believes this means that the reintroduction place was chosen well.
“This district has a dense boar population, and predators noticed this, as well as the good climate and landscape conditions. The release was also well-organised; the tigers felt almost no stress. When the boars begin to migrate, the tigers will follow. Now they have no such need,” Valery believes.

Back to the wild

The Amur tigers Yelena and Pavlik, that were captured in 2018 together with their mother and were staying at the Rehabilitation Centre, have been transferred to their release site in the southern Amur Region. Unfortunately, their mother was not able to return to the wild, but the cubs received a chance for independent life in the wild after a year-long adaptation program.

According to the experts that were overseeing the animals’ transfer to the Amur Region, the tigers handled the trip well and feel great. Upon arrival, the tigers were immobilized and put in a special temporary open-air enclosure. The animals will spend about a week recovering from the trip and adapting. Then the gate will be opened and the tigers will be released into the wild.

“For now, the tigers are recuperating from the immobilizing drug that was injected before their transfer to the enclosure. We gave them enough water and food, including the carcass of an adult Manchurian wapiti and 10 live rabbits. So they will not starve during the adaptation period. Our group will stay here, along with the staff of the Directorate for the Protection and Use of Wildlife and Protected Areas of the Amur Region, and we will closely monitor the tigers. When the time is right, we will let them go,” said Viktor, director of the rehabilitation centre.

We also have some news from Bastak. According to the "Amur Tiger Programme" a regular check of the camera traps in the Bastak Nature Reserve allowed researchers to accurately determine the gender of the cubs from Zolushka’s second litter. One of the cubs is a male and the other one is a female. Experts noted that the birth of another female tiger in the nature reserve is very important because female tigers are not competitive and Zolushka is likely to give away part of her home range to her daughter. This will increase the chances of the young tigress leading a comfortable life and successfully reproducing, as she will not have to look for a new home and take extra risks. Zoologists estimate that there are three or four females in the nature reserve; therefore, the probability of the young female tiger staying there is very high.

Over six years in the Bastak Nature Reserve, Zolushka has given birth to four cubs, including three males. Two males from the first litter, Prince and Vostok, left the nature reserve to look for their own homes. The third cub, who has already reached the age of adulthood, still lives in his natal (birth) area, but he will probably have to move outside the nature reserve soon because most of the habitable territory belongs to another male tiger, Bastak.

Thank you for your contribution to Amur tigers’ rehabilitation!