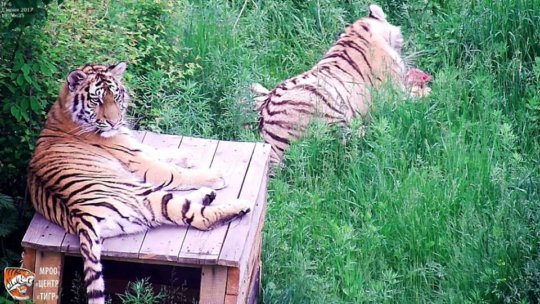 Recently, two Amur tiger cubs have undergone a standard veterinary examination at the Centre for the Rehabilitation and Reintroduction of Tigers and Other Rare Animals. Since the moment when the young predators were rescued, they have been under close observation by specialists at the Centre for six months. The cubs were immobilised before the examination, so that they could not injure themselves or veterinarians. The examination showed that the cubs are in good health, their rehabilitation is going well and they have every chance to return to the wild.

Vets paid special attention to Saikhan’s set of adult teeth growing in. An X-ray examination showed that healing process of head wounds is going well. As you may remember, the cub was found with a serious through-and-through gunshot wound to his head in Pozharsky District of Primorye in January 2017. Shortly afterwards, Saikhan was successfully operated. Despite a serious trauma to its eye, the tiger did not lose its eyesight; broken upper jaw bones grew properly back together. Saikhan’s head wound could have disrupted the replacement of his milk teeth with permanent ones. Luckily, vets noticed nothing abnormal.

The female tigress has no trouble with her teeth either. She was found without her mother in Lazovsky District of Primorye and sheltered by the Centre in December 2016. Her unofficial name is Lazovka. After installing new remote cameras along Lazovka’s enclosure, the Centre’s caretakers noticed that there was something wrong with her hind leg. The recent examination showed that the tigress is in good health.

At present, the two cubs are undergoing rehabilitation together in a specious 1.2-hectare enclosure where they hone their hunting skills.

We express our deep appreciation for your support of the Tiger Rehabilitation Centre, and believe that our joint efforts will help these two tigers successfully return to their wild home.

Saving species from above 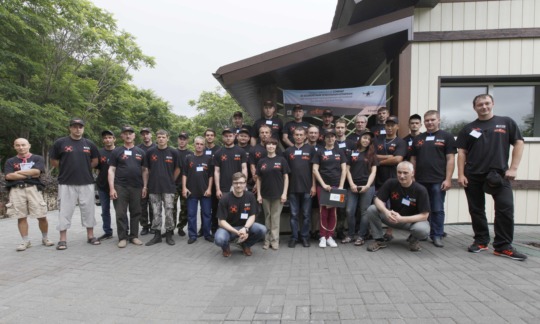 Dear supporter, we wanted to tell you about the workshop Phoenix conducted last weekend in the Land of Leopard national park aimed at improving the protection of both the endangered big cats and their habitat through using unmanned aerial vehicles. And also to let you know that ONLY TODAY on July 12th from 9 a.m. to 11.59 p.m. GlobalGiving would match all your DONATIONS (while funds remain) as it is a Rewards Bonus Day! If you would like to support any of our projects today is the best day.

Meanwhile the first hands-on workshop devoted to unmanned aerial vehicles (UAVs or drones) was held in the Land of the Leopard National Park last week. Over 20 specialists from various national parks and nature reserves of the southern Russian Far East gathered to participate in the training session organized by the Phoenix Fund and supported by IFAW. The workshop let forest guardians deepen their knowledge, get familiar with new unmanned systems technologies, and improve their skills to operate UAVs.

These days UAVs have become an integral part of law enforcement efforts. Representatives of Russian nature conservation agencies, including protected areas (PAs) have become interested in unique capabilities of UAVs. Over a number of years the Phoenix Fund has been assisting national parks and nature reserves in nature conservation and helping them keep up with the times and use new possibilities and technologies. Since recently with this initiative a project on the use of UAVs in protected areas of the southern Russian Far East including the Land of the Leopard national park has been launched. Since 2015 Phoenix provided the national park with three drones that are now used by anti-poaching teams during their patrols. Unmanned aerial vehicles fitted with photo and video cameras have become the right hand of forest guardians. They give a bird's-eye view of things happening on the ground, let detect forest fires, locate violators and monitor wildlife and vegetation. Also, UAVs are used to get footage of stunning and beautiful landscapes.The rangers have already registered a few wild fires and illegal trespassers threatening the Amur leopards in the park.

At the workshop, true UAV experts shared their experience, told about all specific aspects and ins and outs of the work with UAVs. During the training session the participants learned about new Russia’s drone laws and rules of drone registration, problems faced by UAV operators, flight safety and various flight programs, etc. Certainly, the theory was not everything; the organizers gave much attention to practical training. In Land of the Leopard National Park, there was a series of flights by various types of UAVs.

«Progress advances at a great rate. Today, new technologies give unique opportunities», sais Director of the Phoenix Fund. «For this reason we decided to gather representatives of PAs, help them introduce UAVs in their work in order to perform law enforcement, scientific efforts and educational and outreach activities more efficiently. Participants will be able to share knowledge obtained during the workshop with their colleagues».

«Participants were able to not only hone their skills to operate UAVs, but also connect with unique nature of the Southwest Primorye and the Land of the Leopard National Park by visiting 'Leopard Trail' eco-trail», Zilya, Director of the park's Environmental Education and Tourism Department said.

«I would like to note that during the workshop the participants who have some experience in use of UAVs got answers from experts to their questions. Due to novelty of unmanned aerial systems, there is little useful and accessible information in open sources. Experience gained using trial and error can be rather expensive», one of workshop lectors, specialist of the Phoenix Fund Alexander said.  «Three years ago we started teaching rangers from various protected areas to basic skills needed to operate UAVs, and thanks to regular feedback we understood that it is time to improve those skills. The Phoenix Fund would like to hold such workshop annually due to great interest from nature conservation agencies». 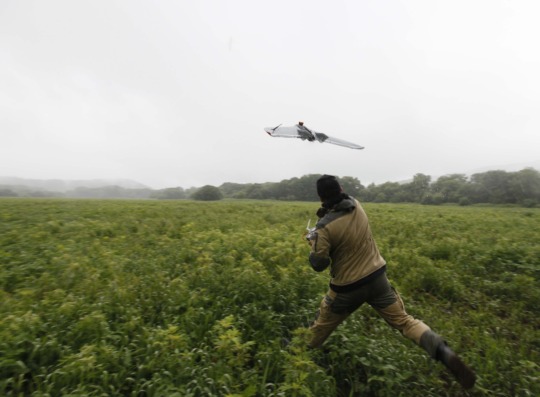 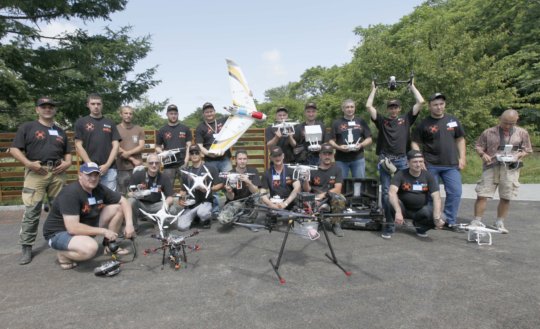 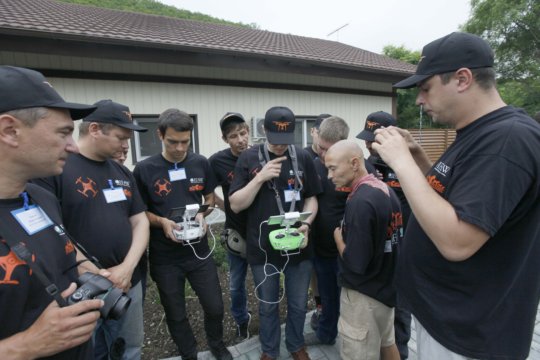 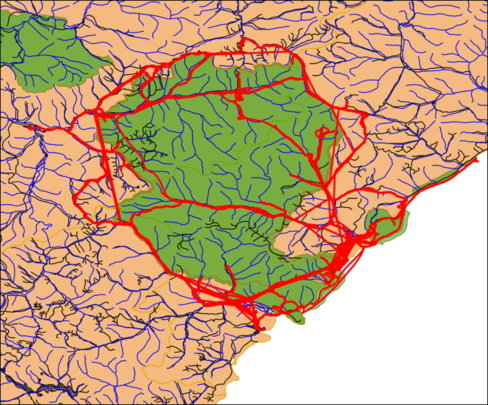 We want to thank you for the support of our new project “Save Wild Tigers of Sikhote-Alin” and present you with a report on successful project activities implemented in the first half of 2017. We truly value each and every donation you make towards the conservation of unique species that are on the brink of extinction.

In 2017 each of the six patrol teams of three to five rangers were patrolling the core tiger breeding area in Sikhote-Alin for 28-30 days per month. Rangers checked the assigned territory at  different  time  of  the  day,  laid  ambushes  and  also  conducted about 40 night patrols every month. The effectiveness of law enforcement operations conducted by the teams was achieved through SMART program. The Spatial Monitoring and Reporting Tool (SMART) is a tool for measuring, evaluating and improving the effectiveness of anti-poaching patrols and site-based conservation activities. One  of  the  most  important  observations  that  SMART  offers  to  law enforcement staff is the map of revealed violations. In Sikhote-Alin protected area (PA), all the crimes took place at the borders. Having  realized  that  most  of  violations  happen  at  the  roads  leading  to  the  PA  and around its borders, including logging roads, in 2017 the teams conducted more vehicle patrols checking  the  sites  of  most  probable  infringements. Each month the teams covered over 250 km on foot patrols and about 1200 km on vehicle patrols.

With SMART data, we can clearly see that the anti-poaching teams work very well in preventing wildlife crimes and detain violators at the approaches to the core tiger breeding areas. Therefore, in the first half of 2017 no cases of poaching took place there; however the rangers issued a number of administrative citations for illegal trespassing.

Moreover, the teams began to go deeper inside the reserve comparing to previous years.  Although no poachers were detained there, it is good practice to ensure proper protection of core reserve territory. Tiger population in Sikhote-Alin is more or less stable now, with a tendency to increase. The good thing is that the number of litters has been increasing for the last years. Just five years ago no tiger cub was recorded, but now there are at least four litters in the protected territory.

Besides Amur tiger protection the law enforcement efforts by the rangers in Sikhote-Alin ensure safety of another valued animal - the Musk deer. Musk deer are small, shy, fanged deer targeted by poachers across Asia for the musk gland found in males, a substance that, gram from gram, is more valuable than gold.

Among the conclusions of a study published recently in the peer-reviewed journal Oryx, researchers from WCS (Wildlife Conservation Society), The Russian Academy of Sciences, Sikhote-Alin Reserve, and World Wildlife Fund found that logging activities inadvertently exacerbate the poaching problem by providing easy access for poachers in the Sikhote-Alin Mountains of the Russian Far East.

“Poachers drive to freshly-logged areas and set snares there for musk deer,” said Dasha, a graduate student at the Pacific Geographical Institute who led the fieldwork component of this project. There is a thriving black market for musk glands, used in the perfume industry and in Eastern medicine, and logging roads built to facilitate timber extraction make these deer easier to reach.

Thanks to the support from the GlobalGiving community and other charitable foundations, we are able to keep SMART law enforcement program running in Sikhote-Alin protected area and also achieved a mitigating solution that is being adopted by the logging company to make sure both species - Amur tiger and Musk deer won’t suffer from poaching. In partnership with the primary timber company in the region we try to identify which logging roads most threaten Amur tigers, musk deer and other important wildlife and to block human access to these areas. 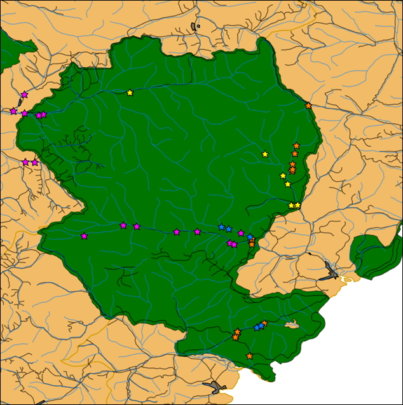 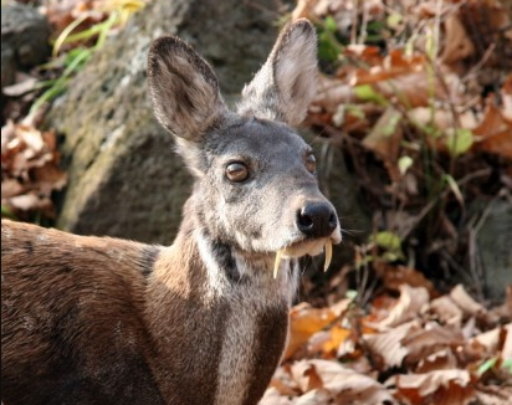 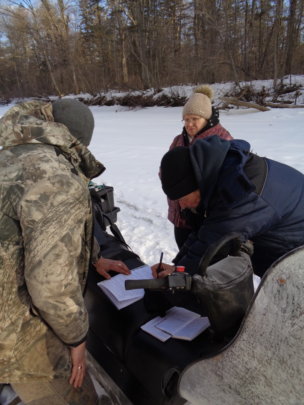 Rangers on a patrol (c) Roman Kozhichev
‹ 1 ... 11 12 13 14 15 16 17 18 ... 45 ›
WARNING: Javascript is currently disabled or is not available in your browser. GlobalGiving makes extensive use of Javascript and will not function properly with Javascript disabled. Please enable Javascript and refresh this page.