One year after Typhoon Haiyan: Progress report and thank you 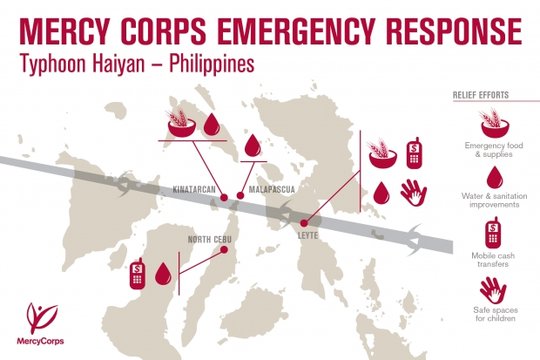 Just over a year ago, Typhoon Haiyan, swept across the Philippines leaving chaos and destruction in its path. More than 6,000 people lost their lives and 4.1 million people were uprooted from their homes.

When you learned about how this storm had impacted communities and families, you donated to support emergency response relief and recovery efforts - Thank you! Your generosity has made a real impact on the lives of Filipino families.

In the first weeks after Typhoon Haiyan, Mercy Corps coordinated with with partners and provided food, water and emergency supplies such as blankets, soap, and shelter materials to more than 18,000 people. Mercy Corps' emergency response focused on communities that had received little or no aid and those living in remote areas. In addition, Mercy Corps established two child-safe spaces to help children process fear and trauma. In addition, with your support the organization worked with partners to improve water and sanitation services for 5,000 people living on remote islands – building toilets and hand-washing facilities in schools, repairing community wells and providing water filters.

Mercy Corps knows that even as emergency response teams were helping survivors meet their immediate needs, they must also begin the work of longer-term recovery and rebuilding. It became clear that survivors had an accute need for money so early 2014 Mercy Corps launched an emergency cash assistance program. The assistance provided families the resources to begin their own recovery process, depending on their needs and priorities – to buy food, repair their homes, and restart their businesses.

One of the first individuals to sign up for the cash assistance program was Florida Go, pictured below. Florida and her husband Realino Go were lucky to emerge from the devastating storm alive, but like millions of others, found their world destroyed. Their only source of income — the humble candymaking business they ran out of their kitchen — was wiped away. With cash assistance they were able to get their business back up and running. Watch their inspiring story here.

In partnership with BanKO, a microfinance bank in the Philippines, recovery teams made electronic cash transfers through mobile phones to 25,500 families, like the Gos. For many families, the mobile accounts are the first formal bank accounts they have ever had access to, and the accounts allow them to store, spend and save their money. Many recipients have used the funds to rebuild after the storm and some families have managed to accrue some savings, a small but important safety net for future crises.

Thank you again for bringing help and hope to Typhoon Haiyan survivors! 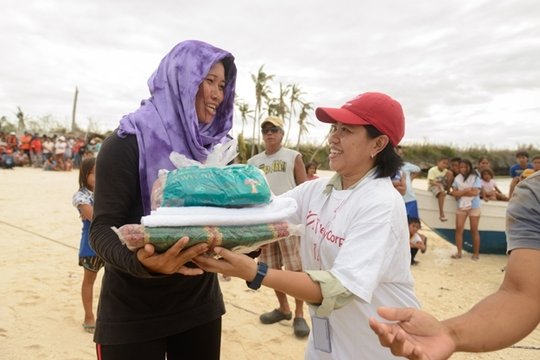 After the disaster: Emergency food and supplies 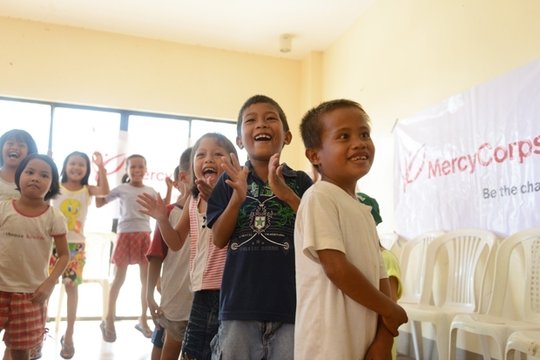 After the disaster: Safe spaces for children 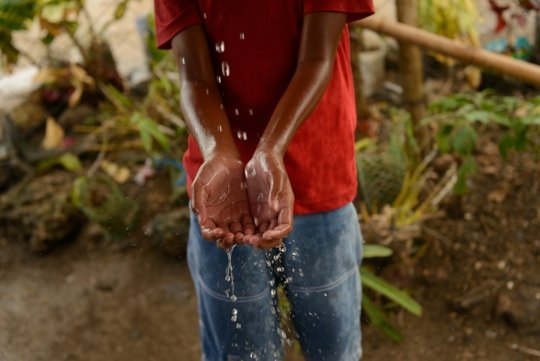 You are helping children get the food they need 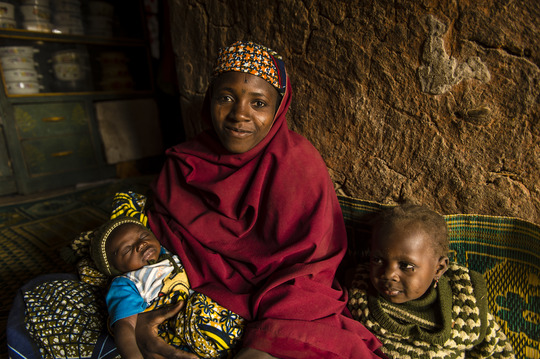 Nana with two of her children

For most of her life Nana Balki has struggled against poverty and hunger.

The 28-year old mother of seven and her family subsist entirely on her husband’s farming. But the land has suffered from years of droughts and floods, and insects have damaged crops, causing persistent food shortages for Nana and her family.

Nana tells Mercy Corps, “We get very little rain and when we do get rain…there are no seeds to plant.”

Because of drought, food prices have skyrocketed, and access to clean water is minimal. Unable to store crops or purchase food, families like Nana’s are forced to go hungry.

But thanks to your generous support, Nana and women like her are acquiring the resources and knowledge to provide their families with healthy meals through periods of drought and flooding.

Nana joined a mother care group run by local health workers and Mercy Corps staff in her village. In this group, Nana receives training about healthy nutrition and childcare practices –information that she shares with other women in her group and her village. Nana has also received emergency food supplements to meet some of the immediate food needs of her family, as well as climate-appropriate seeds and improved farming training to grow more diverse crops in community gardens so that families can rely on their own grown food in the future.

The emergency food supplements meet an immediate need, but the community gardens will allow the women and their families to prepare nutritious meals even during periods of drought.

With the training Nana receives in the mother care groups she teaches other women how to prepare healthy meals for their young children and infants and how to care for them when they are sick.

“There is no greater benefit than learning how to take care of our babies’ nutrition and health,” she says. “The knowledge is a great benefit. The knowledge is in our village and gets spread to even more people in other areas.”

Your help has given these women, their families, and their villages the hope for a healthy and secure future. “The big garden that Mercy Corps helped us start is giving us hope,” says Nana, “but it is only beginning right now. Next year it will give us a lot of food.”

Without your generous contributions, Mercy Corps would be unable to provide communities, like Nana’s, with the knowledge and resources to improve their lives. Thank you for your support.

You can continue to make a difference by: 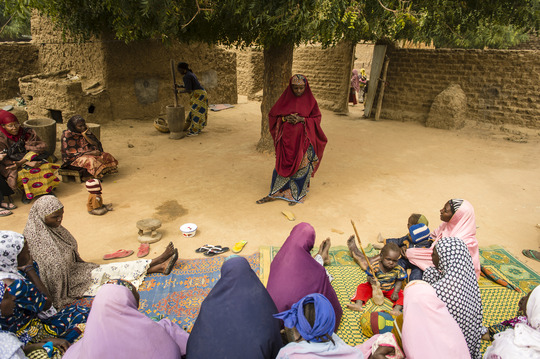 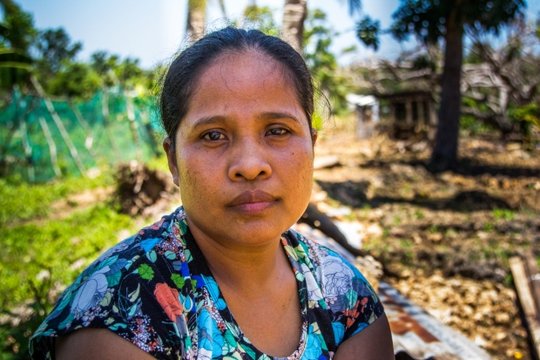 When Typhoon Haiyan made landfall last November, Casimira Amoren Asidto, 33, was holding a wake for her husband, who had passed away from acute appendicitis a few days earlier.

Outside her house, gusts of wind were tearing through the village, snapping trees in half and whipping debris into the air. By 9 a.m., the walls of her house had begun to collapse. After the storm, Casimira and her children moved in with her parents and in the early days relied on emergency water and food distributed by aid organizations.

Now a single mother with four children under the age of eleven, Casimira knew that supporting her family would be a struggle. The sporadic income she earned from selling fish at the local market was insufficient for rebuilding her home and sending her children to school, much less for expanding her business.

But thanks to your compassion and support, Casimira and others like her now have hope for the future. Your donations have provided thousands of Filipinos with the opportunity to rebuild their lives better, stronger and more resilient than ever.

In January, Casimira became one of the first people to register for Mercy Corps’ mobile-money transfer program, which uses mobile technology to provide recovery funds to families hit hardest by the storm.

Many people across the Philippines’ 7,000 islands live on less than $2 USD per day, and 80 percent of them lack access to brick-and-mortar banking services. In such precarious financial circumstances, finding the money to rebuild after a massive disaster like Haiyan can be a daunting task.

The transfers provide urgent funds to families working to rebuild their homes and livelihoods, and the spending boosts the economy, which helps the entire region recover more quickly.

Casimira decided to use the first of her three cash transfers to make a down payment on a plot of land near her mother’s house, on which she will eventually build a new home.

And when she receives the remaining two cash transfers, she wants to leave them in her savings account to earn interest, pay her children’s school fees and save in case of an emergency.

Because of your support, Mercy Corps has been able to bring hope to those hardest hit by Typhoon Haiyan. Casimira is optimistic and sincerely grateful for the support her family has received.

“Thank you that you have come into my life. You have helped me so much, helped me move on,” she told us. “Thank you for teaching me how to plan for the future, how to plan for my children’s future and for helping me put them through school. My life now has direction.” 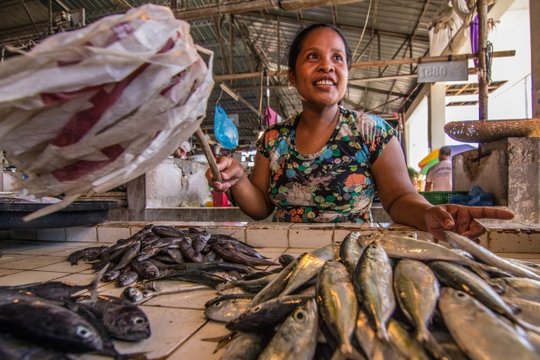 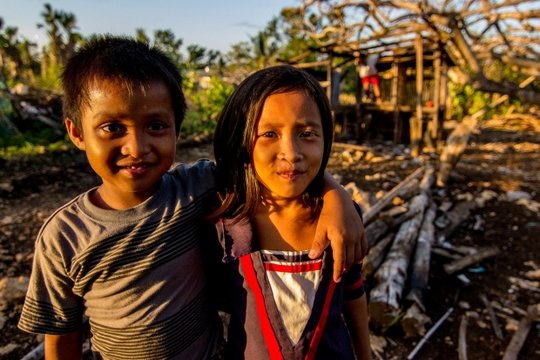