Humanitarian Crisis Continues in the Sahel

Every day there seems to be a different country in the news with a new tragic headline.

Last year, we saw an unprecedented number of humanitarian crises around the world, and thanks to supporters like you, we've been on the ground helping people survive and continue working toward a better future despite unimaginable circumstances.

As the humanitarian crisis continues across the Sahel in Nigeria and Sudan we are looking ahead at the following challenges we must address in 2015 — and what new ways we can make a lifesaving and lasting difference for millions of people facing displacement, hunger, violence and disease.

The Situation: The world’ youngest nation has been battered by civil war since political violence erupted in the capital of Juba in December 2013. The conflict soon spread across the country, destabilizing markets and forcing more than one million people to flee their homes. Many ran into the bush with nothing on their backs but their children.

This is only the latest conflict, after decades of another civil war that ultimately led to South Sudan's independence in 2011. For a couple years it looked as though this most underdeveloped country in the world would have a chance at peaceful growth, but “The roots of the conflict are well in place and haven’t been dealt with,” says Redmond.

Now, the entire country is in the grips of a massive hunger crisis — the U.N. warned recently that more than 2.5 million people are at risk of famine. In a country where most people have been dependent on subsistence farming, families are unable to grow food after being forced to leave their own land behind, and markets are barren because traders do not want to risk being attacked en route.

How We're Helping: “We’re trying to focus on food security and look at markets. That’s what needs to happen because food security is an ongoing problem,” says Redmond. But the challenges are steep. “How do we do it within a conflict? How do we do it on a big enough scale to matter?”

Mercy Corps is working in remote villages in South Sudan to help displaced people grow more food to feed their families. We’re also providing cash assistance to the most vulnerable people so that they can purchase food in local markets.

Our work helping traders maintain their businesses is helping keep South Sudan’s markets alive, and our team in South Sudan is continually looking for new ways to help the people of this young country survive and recover in the delicate and constantly changing environment.

READ THE LATEST: Escape to safety — one staff member's journey

The Situation: Nigeria is the most populous country in Africa and is, in many ways, a model of prosperous development in Africa. But stark economic inequalities remain — roughly 70-percent of the population lives in poverty, and women and girls have especially-limited access to education and resources.

Ethnic and religious conflict is still seen in pockets across the country, and now, the rise of extremist violence by Boko Haram in the north of the country is putting millions of people at risk and threatening neighboring countries. Nearly one million people are now displaced in Nigeria, creating new humanitarian needs. “That’s a serious one to watch,” says Redmond.

How We're Helping: Our emergency response teams are on the ground and assessing the areas of most urgent need and how best to respond.

Despite the potential for more serious conflict, Mercy Corps’ ongoing programs to support young women's education and job training continue. Their safety and security is our top priority in the insecure environment, but we believe we cannot give up on addressing the root causes of inequality and poverty here.

By helping girls stay in school longer, and providing tutoring and economic and business skills lessons, they will be empowered to make better decisions for their families and contribute to the peaceful development of their communities. 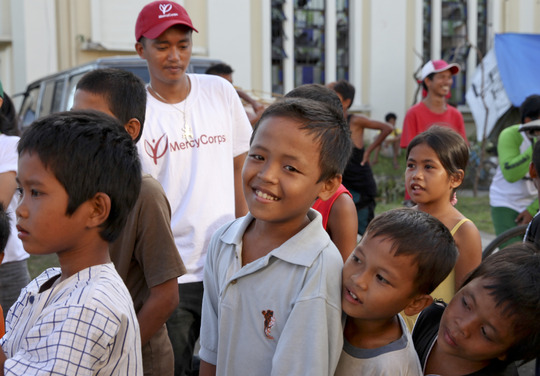 In November 2014, we passed the one year anniversary of Typhoon Haiyan in the Philippines. During that time, we reflected on the aid provided and we want to share just a few accomplishments because of you:

Lives affected by the typhoon have been improved because of you. Thank you.

Though we will continue our long term efforts in the region, we will no longer be doing a project page through GlobalGiving. If you would like to still donate to the mission of Mercy Corps through GlobalGiving, we encourage you to change lives through our Help Turn Crisis Into Opportunity project. You can also continue to follow our progress in the the Philippines and see our other programs in the country as well.

We are truly thankful for your generous contributions and for continuing to care 16 months after the typhoon. You have helped the people of the Philippines get back on their feet quicker!

Most days are the same for women in rural Niger. The work appears never-ending.

Santou’s life is no different.

She wakes up and prays.

Sweeps the house and courtyard.

Washes the children and their clothes.

Makes millet porridge for them, including Zouberou, 8.

Fetches water and tends the garden.

The idea of rest puts a smile on her face, but those stolen moments of calm are rare.

Her taxing daily routine highlights the challenges of life in the Sahel, a semi-arid region that stretches below the Sahara Desert.

Like Santou, most people here depend on subsistence farming, mainly growing the staple grain millet. But increasingly frequent droughts are drying up the land, making every day a struggle to meet the most basic needs.

Even more than rest, Santou dreams of food.

“Health is the only thing that you are praying for God to bring you. I want to know there will be enough food for the year,” she says. “If you can get that, you’re going to laugh and be happy.”

Finding enough food always seems to be precarious. But Santou is a determined woman — obstacles have only made her work harder to find ways around them, to make life move forward.

When the millet harvests started getting smaller, she planted a garden with tomatoes, cabbage, onions and lettuce. She added to her family’s diet, and when it grew well, she sold the extra to buy more grain.

Then another enemy appeared —not drought, but bugs.

“A pest came and ruined my tomatoes. You work hard watering the plants until they should bear fruit, and then something comes along to ruin everything. We needed a new kind of work to do, to not rely on only the tomatoes and the plants.”

So she saved little by little and bought a goat. Santou knew that the animal could be the start of a different life, providing milk even during the dry seasons — enough to keep her children fed and to make money by selling yogurt and cheese.

What could happen next? A flood.

It’s the bitter irony in a land wracked by drought — the ground is so dry and poorly managed that when the rains finally do come, the ground can’t absorb it and the water has nowhere to go.

“If the water comes up, it carries everything with it. People tried to stop it until they tired. There was nothing anyone could do,” Santou remembers. “Even the houses over there, the water took them.” Her goat was lost.

And Santou was lost, too — for once, she wasn’t sure what to do next. All of her savings were invested in her goat. How would she start over without any money?

That’s where Mercy Corps came in — after hearing about the flood, our team visited Santou’s village and assessed the damage. They helped families repair their homes, they taught people to prepare the land before the rainy season so prevent another flood, and they brought Santou and many other women new goats.

“If Mercy Corps hadn’t come after I worked so hard to get that one goat, I don’t know what I would have done,” she says. Read our original story about Santou from 2012

“I’ve had these goats for almost three years now," she adds. "My goats are healthy. We are thankful.”

Caring for her goats isn’t necessarily less work — every morning, Santou walks for nearly an hour taking them into the bush to graze, and then has to round them up again at the end of the day.

But she is resting easier knowing that she has a sustainable and growing source of food and income — in fact, she’s already turned the pair of goats into a herd of five.

If the worst happens, like a desperate food shortage, these goats are a safety net: “Now if I don’t have enough to feed my children, I can sell one of my goats to buy food for them,” Santou explains.

She’s looking beyond the obstacles now — to a future where she can cope with whatever comes her way, to care for her daughter and grandson, Massaoudou, and her five other children.

“If these goats keep reproducing, then I will have enough food for many years,” she says. “If you have what you need, then you can smile.”

Hear from Santou herself in this short video.

You can help another woman like Santou lift herself out of poverty.

Give the gift of hope. Your generous gift helps women and families like Santou's become less vulnerable and helps improve their health and access to nutritious food. Thank you!