Why Cash is Key to Helping Nepal Rebuild 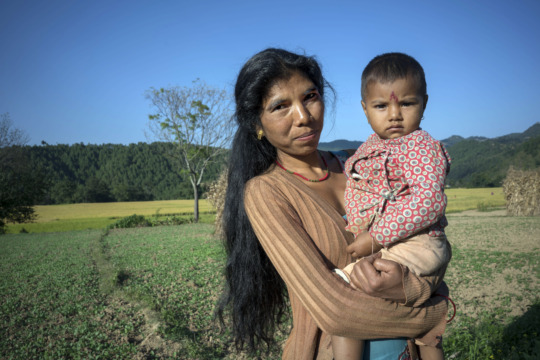 All photos by Tom van Cakenberghe for Mercy Corps

It's been six months since a massive 7.8 magnitude earthquake struck Nepal, killing more than 9,000 people and rupturing the lives of nearly 8 million.

Today, thanks to our supporters and partners, communities are slowly beginning to recover.

The earthquake devastated local economies and brought down electricity lines, leaving families with little money and no electricity.

But cash assistance — distributed to 23,000 families — is helping people get the supplies they need to rebuild. And solar lamps, included in many of our emergency kits and equipped with mobile charging ports, are helping families communicate with each other.

In the coming months and years, we will continue to help vulnerable families access financial services like recovery loans, and we will engage communities in emergency planning to better prepare them for future disasters.

Below, meet a few of the earthquake survivors you’ve helped us reach and find out what support they’re most grateful to have.

Her story: Jyanu, 32, owns a small restaurant in her village. She and her husband work there to support their three children. Jyanu and her family used to live in the same building as the restaurant and grow vegetables outside, but April’s earthquake damaged the living quarters, so they had to build a temporary shelter nearby.

What she’s most grateful for: The solar light that Jyanu received is helping her whole family, including her three children, who study by its light each night. “The solar light is best,” she says. “Even before the earthquake, we had problems with electricity. The light is dim at night. We use the solar light all evening until bed.”

Jyanu is preparing for a brighter future, too. She saved a portion of the cash assistance for each of her three children.

See photo below (second from top)

Her story: Kumari was six-months pregnant with her baby Santosh when the earthquake struck her village. Her older child Ridham, 7, was injured in the earthquake. Kumari and her husband’s home was destroyed, and they had to sell their valuable oxen to pay for Ridham’s medical bills.

Kumari’s husband works as a plumber and makes about 600 rupees each day, but they estimate it will take 80,000 rupees to build a new home. For now, they are living in a temporary shelter until they can rebuild.

What she’s most grateful for: Kumari and her family received an emergency supply kit and 7,500 rupees in unconditional cash to use for whatever they needed most. Because their home was destroyed, they used the money to buy corrugated metal to help construct their temporary shelter.

Kumari also appreciates the solar light that came in her kit — it gives her the light she needs to cook healthy food for her family.

See photo below (third from top)

Her story: Muya moved to this area when she married her husband 30 years ago. They’ve lived in their home for 20 of those years, raising their five children ages 15-28.

“When the earthquake happened, I was running and crying. I fell down and started to cry,” she remembers, standing on the same ledge where she stood at the time. She was only steps away from falling down the hill with the crumbling rock.

Muya and her family are living in a temporary shelter now, but it’s not as close to home as she’d like — she’s anxious to rebuild the family home. “When I was first married and came here I didn’t know anyone and I was sad. But then I fell in love with this place. Now I know everyone, I don’t want to leave.”

What she’s most grateful for: “I couldn’t bring anything from the [damaged] house so I could use everything,” she says when asked about the emergency kit her family received. “Clothes, kitchen stuff, the solar lamp. We use it for cooking and for going to the toilet at night.”

Muya and her husband used cash assistance to help build the temporary shelter they now live in with their children.

Her story: Before the earthquake, Basanta and her husband lived in a secluded home up in the hills with their young daughter Yasna. Basanta was outside taking care of their cattle when the earthquake hit — tiny Yasna slept inside on the ground floor.

Their home was destroyed, but fortunately Yasna survived. “I was lucky my daughter wasn’t upstairs where she usually sleeps,” Basanta says. “I wouldn’t have been able to get to her before the house collapsed.”

Now, Basanta and her young family have moved in with her mother-in-law. Their home is cracked, but livable, and Basanta has a small garden to grow food. But the village’s water source was damaged by the earthquake. “Before the tap was repaired, we walked 35 minutes to fetch water, two or three times a day.”

What she’s most grateful for: For Basanta and her family, clean water is the most important thing they could ask for. Mercy Corps repaired the village’s water tap, and now the family is happier. “I go to the water tap about 15 times a day, to get water for the livestock, to wash clothes, carry water to the house and garden,” Basanta says.

Cash helped Basanta’s mother-in-law repair the family home, and they use the utensils from the emergency kit to eat meals together.

See photo below (third from top)

Her story: Buri Maya’s home was completely destroyed during April’s devastating earthquake. She’s been married for 37 years and is a mother to five boys. Three of her sons are married, and all of the children lived together with Buri Maya and her husband before the earthquake hit.

Rebuilding will be a struggle for Buri Maya and her family — they face the challenge of removing large amounts of debris from the area before they can build a new home.

What she’s most grateful for: “Everything is perfect, but I liked the solar lantern best,” she says of the emergency kit she received. “It has helped a lot for cooking, and lot of household things. My son uses it to do his homework.”

Buri Maya and her husband were able to build a temporary shelter with the cash they received, as well as enough rice to feed the family for a month after the disaster.

Her story: Sharmila and her husband live in a village near Sharmila’s parents. After the earthquake, they came back to care for Sharmila’s ailing parents, and have been with them ever since.

“When I came to home to see my parents after the earthquake, the village looked like a refugee camp,” Sharmila says. “Even though the houses are still standing people can’t live there.“ The houses are too damaged to be safe anymore. “My husband and I, we’ll be ok, but I’m worried about my parents,” she says. 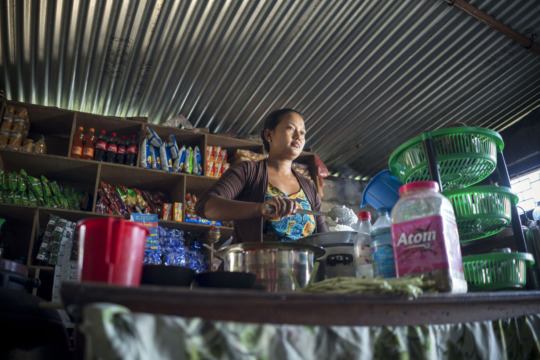 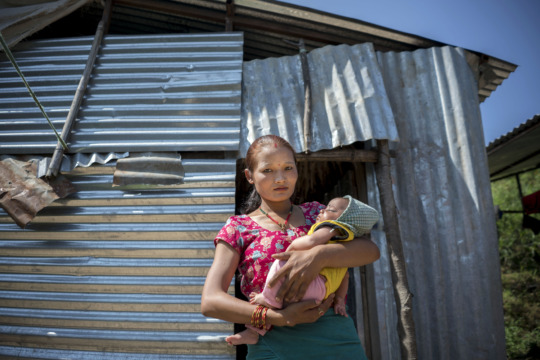 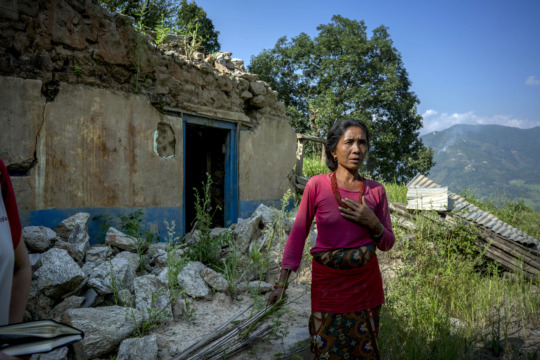 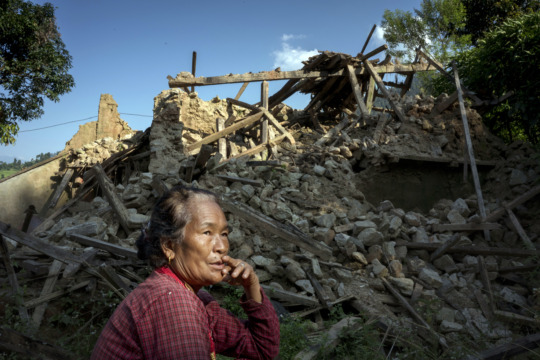 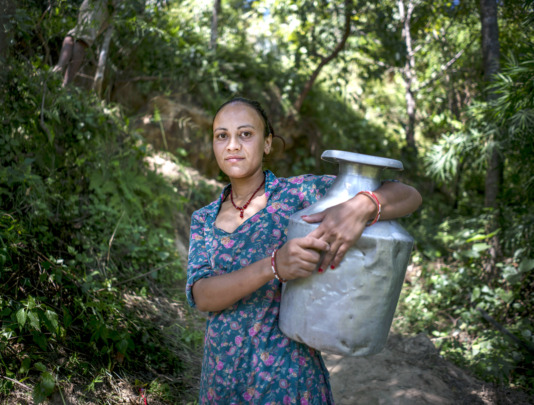 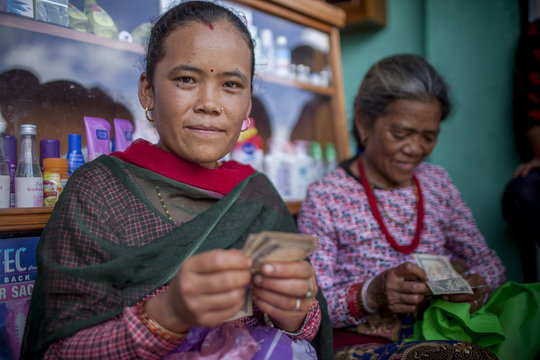 Saraswati holds the money she received from Mercy Corps. Saraswati plans to use the cash to purchase supplies to build a temporary shelter for her family.

It has been three months since the devastating Nepal earthquake. Because of your generous support Mercy Corps has been able to reach over 68,000 people with essential items like food, clean water, shelter supplies and cash.

While we continue to work to meet some of the most immediate needs such as safe water, food support and shelter items, in the next several months we will increasingly shift our focus to longer-term recovery efforts.  Our ultimate goal is to build the resilience of affected communities and to connect people to the resources they need to rebuild even stronger than before the earthquake.

In the past six weeks Mercy Corps has distributed cash to 6,700 households, benefiting close to 34,000 people. In the next month we will reach an additional 19,000 households with cash. This cash assistance allows families to purchase the items that are most important to them — seeds and agricultural tools, food, school fees, building materials — while giving local economies the boost they need for long-term recovery.

What you are making possible is also reflected in these stories and photos.

Saraswati, pictured above, lives in the Nuwakot district of Nepal with her ten-year-old daughter, her eleven-year-old son, and her husband. On April 25th they were sitting in their home when suddenly they felt the floor and walls shake. They managed to quickly escape, but their home was destroyed.

Saraswati and her family are not alone. Nuwakot is one of the regions that was hit hardest by the quake. Damage in these areas is massive — homes destroyed, livelihoods lost, economies stalled and entire villages leveled. That is why Mercy Corps is working in this district, and other hard hit areas, to get cash and much needed supplies into the hands of families.

Last week Saraswati traveled to Sunkhani to participate in a cash distribution led by Mercy Corps. She received a kit that included a solar lantern, hygiene, shelter, and kitchen supplies as well as the equivalent of $75 in cash. She told Mercy Corps that she planned to use the money to invest in supplies and tools to build a temporary home for her family.

The following captions relate to the photos below:

(Top) To date Mercy Corps has distributed cash to 6,700 households. This unconditional cash assistance allows families to purchase the items that are most important to them while giving local economies a boost.

(Middle) In the next month Mercy Corps will reach an additional 19,000 households with cash. Some families plan to use the money to purchase food while others have plan to purchase shelter supplies and supplies for their small businesses.

(Bottom) In Kritipur, Ram, 39, learns how to purify a large can of water using the water purification liquid from her emergency kit.  Mercy Corps has reached over 68,000 people to date with essential items like food, water purification supplies, shelter supplies and cash. 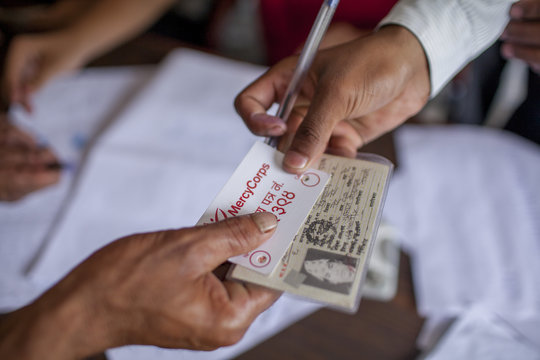 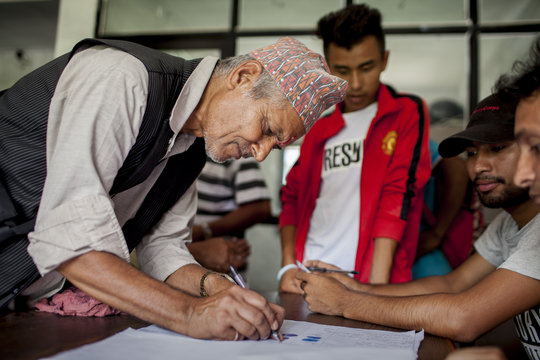 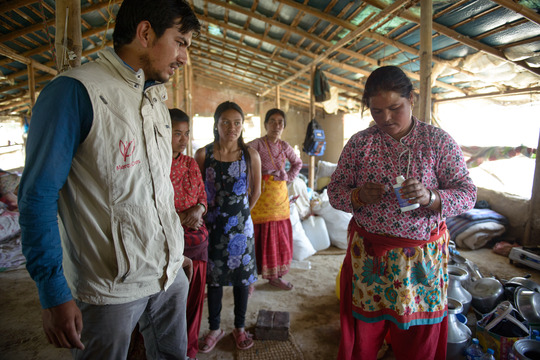 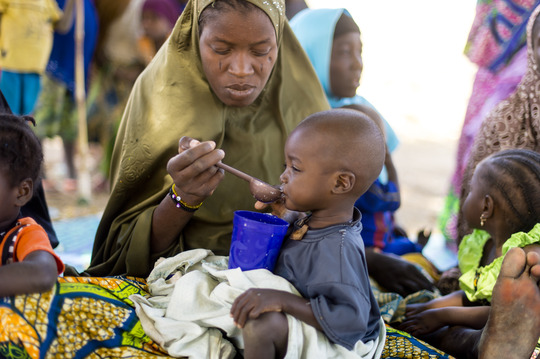 Earlier this month, Mercy Corps celebrated 10 years of work in Niger in the heart of the Sahel - where our work to save lives is poised for continued growth. Reflecting on the aid we have provided over that time we would like to acknowledge your support and call out just a few accomplishments:

While Mercy Corps will continue work to save lives in Niger, Mali, and the Sahel region, we will no longer report work through this project page on GlobalGiving. We encourage you to continue to change lives and donate through Global Giving and our Help Turn Crisis into Opportunity project. You can also follow our progress in Niger, Mali, and other countries in the Sahel.

We are sincerely grateful for your generous donations and for supporting Mercy Corps’ effort to help people survive and communities thrive in Niger, Mali, and the Sahel!