A two-time school drop-out is back to school! 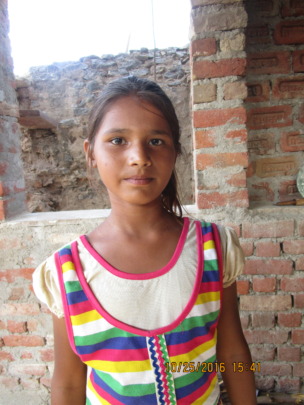 Rachna is now back to school and learning well

13 year old Rachna*, lives in a small village in Rajasthan. When Rachna was in the 4th standard she lost her mother to cancer. Rachna was left with her father, elder sister and younger brother. Six months after her mother's demise, Rachna's father remarried. The age difference between Rachna's elder sister and her new mother wasn't much. Rachna's father feared that his elder daughter would not easily accept his new wife and so Rachna’s elder sister was sent off to live with her grandparents.

Rachna's father and step-mother used to work in the field and as a result Rachna had to contribute to the housework and take care of her younger brother. Due to this her attendance in school suffered. A few months later, her step-mother gave birth to twins. Rachna's responsibility increased as her step-mother insisted that Rachna stay at home to care for her younger siblings. Eventually Rachna was made to drop out of school.

When Swati, an Educate Girls field coordinator (FC) visited the village, she spoke to Rachna's parents about the importance of education and following a number of meetings to convince him, Rachna’s father hesitantly agreed to send Rachna to school. Rachna was enrolled into school.

A few months later, when Swati revisited the village, she found out that Rachna had stopped going to school just days after Swati left the village. She decided to visit Rachna's parents once again and talk to them. After Swati spoke to Rachna's parents she understood that when Rachna went to school she could not help with the housework and look after her younger siblings, this increased her parents' work load. Swati then suggested that Rachna's parents seek help from their relatives who live in the same village. She reasoned that Rachna's younger brother would be at school during the day and the twins could be left in the care of their aunt. She then suggested the Kasturba Gandhi Balika Vidyalaya (KGBV), a government- run free school for girls. She explained that if Rachna went to KGBV her parents would not have to bother about her, as she will be well taken care of at the school. Rachna's father was hesitant to send her to a residential school. Swati then took him to visit the school. After the visit, he was convinced that KGBV was a safe place and that his daughter would be in good hands. Finally, Rachna's parents agreed to send her to KGBV. Swati enrolled Rachna in the 6th grade.

"We are in charge of our future and we shall continue to study as much as we can !" 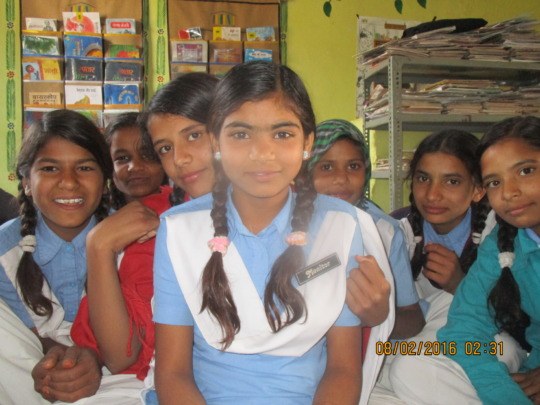 We are talking about a village in Ajmer district of Rajasthan that is infamous the world over for being the hotbed of flesh trade and prostitution. Because of the murky “profession” that these communities have been practicing for generations, they have been perpetually shadowed by several other problems like STDs, unwanted pregnancies, poor hygiene and sanitation, physical abuse, criminal activities and so on. Moreover, education in general and girls’ education in particular has never been a priority.

However, in the past decade or so, due to continuous interventions by the government, the police and numerous NGOs, the families here are very gradually moving to other means of livelihood. It’s a pleasant change to see them send boys to government schools. But when it comes to their daughters, families still do not want to rule out the possibility of them being (forcefully) pulled into prostitution. As a remedial step, they get the girls married and sent off to their marital homes before they hit puberty. In this scenario, the girls getting a chance to go to school is out of question.

When Educate Girls commenced work in these communities in 2014, it put all its strength in getting families to enroll their daughters in school. The major problem faced was around the enrollment of adolescent girls. Therefore families had to be encouraged to send their adolescent daughters to the government-run residential schools (KGBV) that were safe. Most of these girls were child brides, waiting to be sent to their marital homes.

Educate Girls realized that the backgrounds and issues of these girls is very peculiar and therefore ‘life skills training’ was conducted more scrupulously. In these sessions, Educate Girls’ volunteers engaged in continuous conversations with the girls to get them talking about their problems, the solutions to these problems and their future. Games, sports, drama, elocution, singing, art etc. were the means used to educate these girls about the important role of women (and educated women) in our societies. This has slowly instilled them a sense of confidence, self-worth and problem-solving abilities.

Nusrat Shaikh*, one of these girls and the Head of the Girls’ Council (Bal Panch of the Bal Sabha) says, “We could not stop our parents from getting us married very early in our lives, but we are in charge of our future now and we shall continue to study as much as we can! All of us girls here have decided to speak to our parents and get the ‘gauna’ (the ritual of sending brides to their marital homes) postponed at least until we are 18 years old. This way, we will have more years to continue with studies and figure out how we can be self-reliant.”

With her education begins the process of social change, doesn’t it? 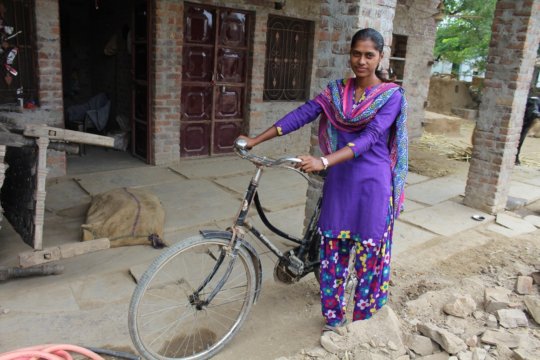 Bhoori belongs to a Rajput family living in Bijoliya block of Rajasthan, India. The Rajput community of Rajasthan stand distinguished in many ways when compared to other tribal communities – often they are financially more stable, may have educated elders, have  smaller families and believe in imparting basic education to their children. Bhoori’s father works as an artisan and has a steady income while her mother and grandmother jointly manage a small flour-mill setup at home. This fetches them good profits as there is no other flour-mill in the radius of a few kilometers.

So luckily for Bhoori and her brother, basic education was never a problem. Bhoori went to the government-run school in her village where she completed grade 8 with flying colors. She was among the brightest students and always made her parents proud. For her secondary education, she walked to a faraway school where she graduated in grade 10 with a first class and then went on to complete grade 12 with a first class again. Under a government scheme to appreciate and encourage girls to continue with their studies, Bhoori was awarded with a cash prize of INR 5,000 when she completed class 12 and previously had received a bicycle when she completed class 10. The bicycle is her most loved possession and today is a part of a beautiful new chapter in her life – volunteerism!

Sometime in May-June 2015, Educate Girls conducted a Team Balika (community volunteer) recruitment drive in several villages of Bijoliya block. The organisation was looking for young, educated volunteers who would champion the cause of girls’ education in their respective villages. The team found 2 prospective candidates in a village named ‘Narsinh Ji Ka Kheda’ where Bhoori lived while another village called ‘Bhatkhedi’ found zero contenders. Bhatkhedi is challenging; it exists in a secluded geography, the houses are scattered and faraway from each other, the roads connecting the village are rough, rocky and difficult to travel on. The biggest problem being that the government-run primary school there has a single teacher who is so tied-up with other clerical jobs that teaching often takes a backseat. As a result, the parents in that village either see no value in sending children to school or send them to a school in another adjoining village.

However, Bhoori was willing take on the challenge and become a Team Balika for Bhatkhedi village and let the other girl take-up the role in her own village. “Are you sure Bhoori? Bhatkhedi is about 5 kilometers away from your home, besides the road to the village is a nightmare and I hope you know about the other challenges as well?” questioned an Educate Girls’ staff. To which Bhoori confidently replied, “The journey is going to be difficult I know, but I have a bicycle and great passion for the cause.” This was not a reply, it was a statement!

So now, every morning you will see a young lady on a bicycle enter Bhatkhedi village early morning. The ride in the scorching heat of Rajasthan is extremely tiring but her passion for the cause makes her forget her physical exhaustion. Her commitment shines through the fact that she has enrolled 17 out of school girls already. Additionally, a few children who went to the school in the nearby village have been brought back to the school in Bhatkhedi, all thanks to Bhoori’s proactive efforts.

The scenario in Bhatkhedi village is completely different today- the school now has 46 students as opposed to 25 at the start of the academic year, it has many more girls now, the teacher may still be caught up in clerical jobs but the classroom continues to witness active sessions and chirpiness and the parents feel their children are beginning to enjoy learning!

Albert Einstein has famously said, “Life is like riding a bicycle, to keep your balance you must keep moving...” and that’s exactly what Bhoori seems to be doing, quite literally!