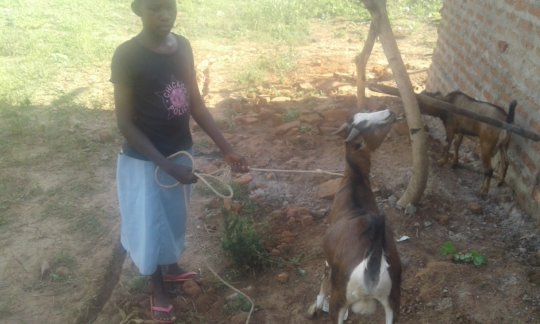 Angella taking her she-goat for feeding

Due to rampant HIV/AIDS death rates, orphans in Uganda constitute to 29% of the total population of 33,000,000. They live under abject poverty with no social safety nets and they require support.

This quarterly activity and status report on “support 320 orphans with goat’s project in Uganda”. The overall purpose of the project remains contribution to improved household income of OVC households to enable them secure Medical treatment, scholastic materials and other basic needs. The project is implemented in the districts of Kibuku, Budaka and Pallisa and it is reliant on financial support from donors and the Community under the Global Giving platform. KADO is grateful to all donors and the community for the support given that has enabled the achievement of these quarterly results and outputs.

KADO is building the capacity of Orphans and other vulnerable children and their households in goats’ management through trainings, goats breeding, provision of advisory services, treatment and dissemination of he- goats to the targeted 320 OVCs. Despite the above effort, many orphans and vulnerable children still live miserable livelihoods. A total of 290 OVCs still don’t have he-goats and the number of OVCs that demand he goats is increasing and overwhelming.

The rate of breeding is very low due to limited breeder-goats and this has hampered the project to attain the expected results.

There are 290 OVCs that study without uniform, school meals and at times lack scholastic materials due to limited household income of the caregivers and guardians.

In the quarter (September to November, 2018), KADO managed to plan and implement the following activities:-

KADO kindly requests all well-wihers to be part of KADO and give a helping hand to this project for the socio-economic welfare of the OVCs in Kibuku, Pallisa and Budaka districts.

This is a success story of Angella aged 9 years, daughter of the late Kizige of Kasasira Sub-County – Pallisa district. Angella currently lives with his paternal aunt (a widow) who is HIV positive and has no sustainable income. To earn a living for the family, Angella a young girl sells ‘kavera water’ and fried groundnuts to the locals. The project Officer met this girl hawking groundnuts and interacted with her about his lifestyle and school history and as the girl narrated her story, the project officer was moved with pity and compassion over the girl who advised Angella to go back to school. However Angella advised the project officer to meet the aunt for consent. When the project officer met Angella’s aunt, the aunt accepted Angella to go back to school on condition that KADO provides support. KADO therefore enrolled Angella and her aunt as a new beneficiary for the year 2018 to benefit from the goats project. Angella will be enrolled in school next year 2019 in primary three and given a she-goat. Angella vows and promised the project officer KADO that she will study very hard to become an engineer in the future. This is a true story of what happens to our OVCs in Uganda, particularly in rural communities. 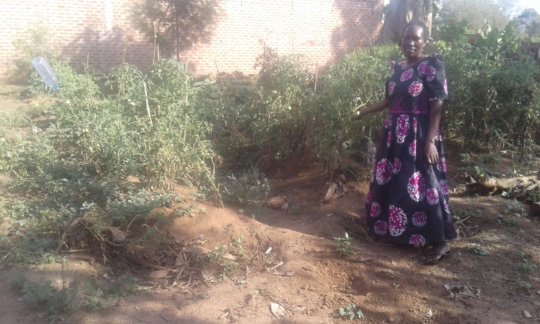 Mucline in her 'dodo' greens and tomatoes gardens

Retention of orphan girl children project in Budaka, Pallisa and Kibuku districts in Eastern Uganda aims at empowering 80 widows in commercial vegetable growing to improve family nutrition and income to pay for school meals and scholastic material for 1450 school going orphan girl children between 8 – 18 years. The 80 widows have been empowered with modern knowledge and skills in vegetable growing and provided with vegetable seeds, pesticides and spray pumps and as sustainability means for the project. This is the September to November 2018 quarterly report and it is located on the GlobalGiving web page platform and our web page of www.kagumudevelopment.org. The report captures the progress of the project for the quarter ended 31 November 2018 with financial support from all stakeholders in the Globalgiving platform.

The following was done in the quarter:

Recommendation
The organization requests all development partners to extend their giving hand to the project to facilitate the implementation of this project in order to improve the social- economic empowerment of widow led households as this is the only viable project in terms of providing quick returns. Currently, in Uganda there is no specific programme to support widows yet they have a big Burden of the OVCs.

This testimony is from Mucline the wife of the late Mugombesya of Kabweri Sub County in Kibuku district who died of electric shock and left her with 6 orphan girl children. Late Mugombesya was at the same time HIV/AIDS positive as he was taking ARVS from Kagumu Health Centre III. Mugombesya was a very hard working man and could support his family effectively. However, he didn’t empower Mucline to engage in economic activities for income generation and be able to stand to support the family in case of the demise of death unto him.

After the death of Mugombesya, Mucline had nothing at hand to act as the source of income to support the family and had zeroed down to selling the land that was small and would be used for agriculture to solve domestic needs like procurement of essential commodities and payment of medical bills for the family members.

The organization identified Mucline, empowered her in vegetable growing using her land and she is able to grow variety of vegetables, sells and access some income to support her family. She is among the women who joined village saving and loan associations and is happily living with HIV/AIDS that claimed the life of her late husband.

This is a true story and explains how this project works in respect to supporting the retention of the orphan girl children in schools in Uganda. 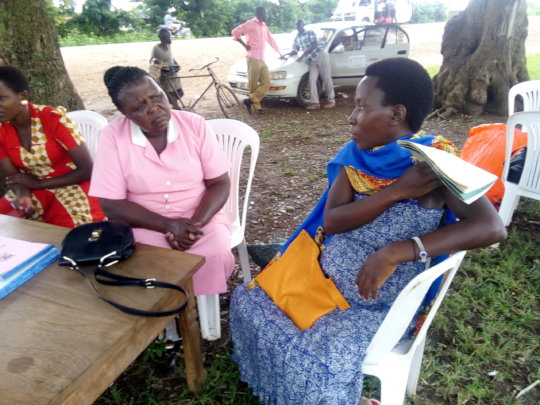 A pregnant woman asking for a LLIN at the outreach

This is September – December quarterly activity and status report on “support Save 750 Pregnant women from malaria in Uganda” project in Kibuku district. The goal of the project is to contribute to the reduction of maternal mortality rates. The project is implemented in the district of Kibuku,” is reliant on financial support from donors under the GlobalGiving and Kagumu Community. KADO is grateful to all donors and the community for the support that contributed to the realisation of these quarterly results.

Malaria is the leading cause of death in Uganda, accounting for over 27%. Maternal anaemia and placental parasitaenemia leads to low birth weight, which is an important contributor to infants’ mortality, miscarriages, Abortions and marternal mortality rate is increased.

To save pregnant mothers from malaria, KADO

Distributes LLINs to the pregnant mothers, spray doom, and Health education at the facility during antenatal and immunisation days.  In addition, KADO provides  malaria treatment to pregnant mothers

In this quarter, KADO managed to achieve the following results:-

i)     Limited and untimely drug supply to Health facilities.

ii)   KADO is a donor dependent organisation, and realises little from its income generating activities to procure LLINS, spray doom and medical drugs and supplies.

Testimony from a Beneficiary

This testimony is from Joyce, a girl aged 14 years who conceived after her senior two. Whereas the government of Uganda distributes Long Lasting Insecticide treated Nets (LLINs) to pregnant women during labour and ANC, Not all pregnant women or girls access them and also she was stigmatied at first to go and get the LLIN. Therefore she had no access to a LLIN and conceived immediately after school. Joyce was staying with the pregnancy minus a mosquito net, spray doom or any knowledge and skills in malaria prevention. She only had a torn mosquito net for the young brother which she was using, hence exposing her life to fire risks and other related health problems.  When Joyce sought for health services at KADO Health facility because she used to be sickly all the time due to malaria. KADO therefore, gave her a LLIN; she is now free from mosquito bites and very grateful to KADO because she no longer becomes sickly as she used to be .  Joyce now tells the fellow women on the importance of sleeping in LLIN because she is not the only one facing the problem since most people can't afford to get nets if not given by government or a donation.This is a true story of what is happening to expectant mothers in Uganda today.

‹ 1 ... 7 8 9 10 11 12 13 14 ... 29 ›
WARNING: Javascript is currently disabled or is not available in your browser. GlobalGiving makes extensive use of Javascript and will not function properly with Javascript disabled. Please enable Javascript and refresh this page.