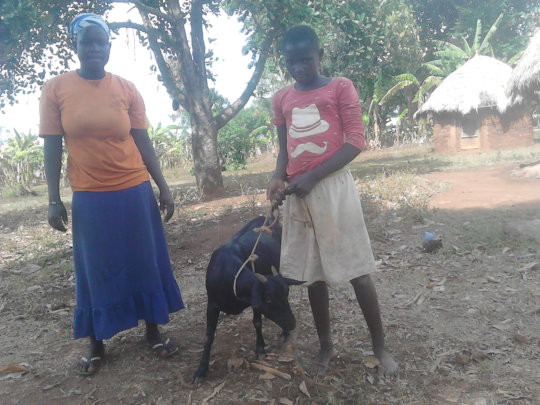 Evaline and the Aunt together with their goat

Support 320 Orphans with goats in Uganda

Due to rampant HIV/AIDS death rates, orphans in Uganda constitute to 29% of the total population of 33,000,000. They live under abject poverty with no social safety nets and they require support.

Ther quarterly activity and status report on “support 320 orphans with goat’s project in Uganda”. The overall purpose of the project remains contribution to improved household income of OVC households to enable them secure Medical treatment, scholastic materials and other basic needs. The project is implemented in the districts of Kibuku, Budaka and Pallisa and it is reliant on financial support from donors and the Community under the Global Giving platform. KADO is grateful to all donors and the community for the support given that has enabled the achievement of these quarterly results and outputs.

KADO is building the capacity of Orphans and other vulnerable children and their households in goats’ management through trainings, goats breeding, provision of advisory services, treatment and dissemination of he- goats to the targeted 320 OVCs. Despite the above effort, many orphans and vulnerable children still live miserable livelihoods. A total of 256 OVCs still don’t have he-goats and the number of OVCs that demand he goats is increasing and overwhelming.

The rate of breeding is very low due to limited breeder-goats and ther has hampered the project to attain the expected results.

There are 282 OVCs that study without uniform, school meals and at times lack scholastic materials due to limited household income of the caregivers and guardians.

In the quarter (December to March, 2019), KADO managed to plan and implement the following activities:-

KADO kindly requests all well-wishers to be part of KADO and give a helping hand to ther project for the socio-economic welfare of the OVCs in Kibuku, Pallisa and Budaka districts.

Case story from Evaline aged 12 years, daughter of the late Yokobuwamu of Kakutu Sub-County – Budaka district. Evaline currently lives with her paternal aunt who has no sustainable and stable income to support the as she majorly relies on “Bagiya” making and selling to earn a living for the family. Evaline moves around the trading center hawking the made “Bagiya”. The project Officer met the girl interacted with her about her lifestyle and school history and as the girl narrated her story, the project officer was moved with pity and compassion over the girl and thereafter advised Evaline to go back to school. However Evaline advised the project officer to meet the aunt for consent. When the project officer met Evaline’s aunt, the aunt accepted Evaline to go back to school on condition that KADO provides support. KADO therefore supported the enrolment of Evaline and her aunt as a new beneficiary for the year 2019 in the month of January 2019 to benefit from the goats project. Evaline will be enrolled in school in the second term of 2019 in primary five and given a she-goat. Evaline vows and promised the project officer KADO that she will study very hard to become a useful person in the future as she further promised to support another orphan that impressed the project officer. This is a true story of what happens to our OVCs in Uganda, particularly in rural communities. 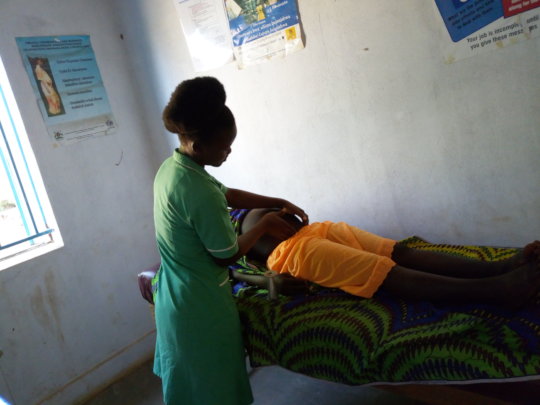 A midwife examining a mother during her 2nd ANC

This is a January – March quarterly activity and status report on “support Save 750 Pregnant women from malaria in Uganda” project in Kibuku district. The goal of the project is to contribute to the reduction of maternal mortality rates. The project is implemented in the district of Kibuku,” is reliant on financial support from donors under the GlobalGiving and Kagumu Community. KADO is grateful to all donors and the community for the support that contributed to the realization of these quarterly results.  A total of 280 pregnant mothers received Health education, 283 mothers received a LLIN each and was found out that 87% had adopted best Health practices during pregnancy

Malaria is the leading cause of death in Uganda, accounting for over 27%. Maternal anemia and placental parasitaenemia leads to low birth weight, which is an important contributor to infants’ mortality, miscarriages, Abortions and maternal mortality rate is increased.

To save pregnant mothers from malaria, KADO

Distributes LLINs to the pregnant mothers, spray doom, and Health education at the facility during antenatal and immunization days.  In addition, KADO provides malaria treatment to pregnant mothers.

On addition to the prevention of malaria, KADO provided ANC and delivery services to her mothers who were being given malaria reduction services

In this quarter, KADO managed to achieve the following results:-

The following are the results for the mothers worked upon at the facility during ANC visits.

NB Malaria prevention was always streamlined and all these mothers who came for ANC were screened for malaria and LLINs provided to them.

ii)   KADO is a donor dependent organisation, and realises little from its income generating activities to procure LLINS, spray doom and medical drugs and supplies.

Testimony from a Beneficiary

This testimony is from prosy, a girl aged 24 years who conceived against her will, her boyfriend left her and she had no financial help during pregnancy. Prosy became sick of malaria and it became complicated at 36 weeks of gestation, little did she know that the plasmodium parasite crossed the placenta. She didn’t have a mosquito net throughout her pregnancy and she remained in the village without seeking medical aid as the fellows could say that it’s normal for pregnant women to be sickly since she was a prime gravida. At term, prosy came to the facility at KADO to deliver, the baby had grade 3 jaundice and on testing, the baby had malaria parasites in the blood. It’s at this point that Prosy recalled being sick towards time of delivery, “I didn’t know that malaria is deadly like this”, she said; I will never ever again sleep with a mosquito net and I have to tell others what has happened to me, she added.

Whereas the government of Uganda distributes Long Lasting Insecticide treated Nets (LLINs) to pregnant women during labor and ANC, Not all pregnant women or girls access them.  Prosy now tells the fellow women on the importance of sleeping in LLIN because of what she went through and she is now a changing attitudes of other women and girls. This is a true story of what is happening to expectant mothers in Uganda today. 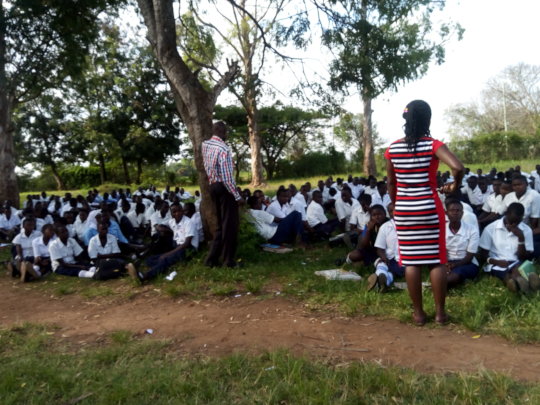 Girl Children of 10 - 24 years in Uganda dropout of school due to failure to manage menstrual health hygiene and lack of support like adequate food and school items. As such engage in child marriage, prostitution and are exposed to HIV/AIDS. In Uganda, particularly in Budaka and Kibuku district dropout of orphaned girl children in schools is extremely high despite the existing Universal Primary and Secondary Education in Budaka and Kibuku district. Caregivers lack adequate capacity to provide necessary support like scholastic materials and other basic needs of girl children. The project establishes sustainable income generating projects to caregivers and trains Orphan Girl Children in Menstrual Health Hygiene practices. This is the January – March 2019 project quarterly report. The report captures the progress of the project for the quarter ending 31 March 2019 with financial support from GlobalGiving stakeholders and partners.

Current Status of the Project

The following were done in the last quarter:-

KADO recommends that funds be made available to organizations addressing issues Adolescents Sexual and Reproductive Health Rights (ASRHR) to improve the literacy levels of girls to enable them become self-reliant and have sustainable livelihood.

‹ 1 ... 6 7 8 9 10 11 12 13 ... 29 ›
WARNING: Javascript is currently disabled or is not available in your browser. GlobalGiving makes extensive use of Javascript and will not function properly with Javascript disabled. Please enable Javascript and refresh this page.