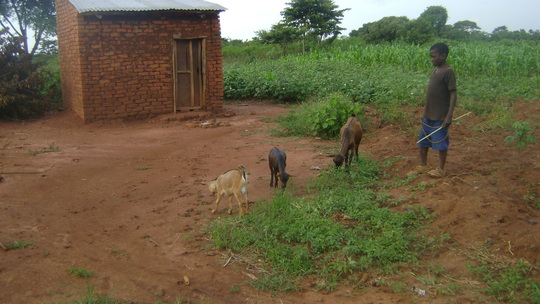 This is the second report of Kagumu Development Organization on support 320 orphans with improved goats in Uganda submitted to Global Giving.

This report details activities implemented by the organization with financial and moral support from the community since June 2011.

Due to overwhelming number of orphans and limited resources, the organization provides limited support and they continue living in difficult situation like absolute poverty.

In this quarter, the following activities were implemented:

1. Mobilized and trained 50 guardians and 100 orphans on improved goats shelter construction and management

2. Mobilised and offered psychosocial therapy and support to 80 orphans

5. Conducted supervision and monitoring to 30 families with our orphans

6. Conducted a meeting with local leaders and the community to fundraised resources and  procured 4 indigenous goats for two orphans

1. Many orphans are dropping out of school due to limited support we provide. Currently 4 of our orphans dropped out of school and married at early age.

2. The project is taking long to make an impact due to limited resources for the project

3. There is high expectation form both the orphans and guardians from the project. Some guardians and orphans pay less attention to project

There critical need for financial support by our development partners to facilitate the project activities implemented at faster rate in order to achieve its impact within a short time.

Kirya John was born in 2001 and  is now ten years old boy whose parents (Kirya Emanuel and Namajja Mary ) died when he was 2 years. The grandmother who is also vulnerable took over responsibility. In 2006 the grandmother also became blind and Kirya was forced to undergo child labour for their survival.

KADO located him in Tirinyi trading center where vehicles stop where he was selling roasted maize and Oranges on 15th/6/2011.

When he was asked why he was selling roasted maize and not at school, he answered that he was trying to look for some money to meet for his family basic need since both his parents died and he stays with the grandmother who is also blind. He said he was used by business owners who were paying him meager wedges at the end of the day.

This boy was used as living story of what many orphans are undergoing in the community and what KADO is trying to address with moral and financial support.

KADO provided psychosocial therapy and support to Kirya John with an indigenous goat and currently is at school in primary one utilizing the Government Programme of Universal Primary Education in Uganda, and engaged in domestic work

Quarterly Report on support to 320 orphans in UG 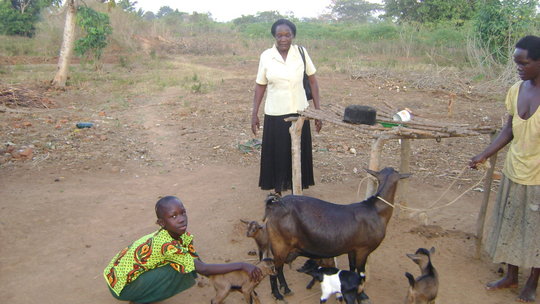 The support for 320 orphans with improved goats project in Uganda as implemented by Kagumu development organization (KADO), started in Jan 2011 as a means of improving household incomes and nutrition of orphans in our maiden effort of poverty alleviation. It was borne from the fact that these orphans live under very difficult circumstances, lack any sustainable social safety and in abject poverty. Because of this vulnerability, they have been exposed to blatant criminality and terrible social and economic abuses.

1. Current status: From the commencement of this project, it was discovered that to ensure meaningful livelihood of these orphans, there was need to mobilize the community within which they live to appreciate their plight, support and provide appropriate care. This was intended to strengthen the social safety network for these orphans. To date, the community is very supportive of their social plight. The orphans have also been mobilized and empowered with coping mechanism strategies through life skills training and income generation. They are a reformed lot of citizens with great potential for transformation in both behavioral and economic empowerment change.

3. Challenges: Although the orphans have been mobilized and rehabilitated, the lack of economic empowerment has great potential for perpetuating their vulnerability. There is therefore need for urgent economic support in order for the current achivements not to be reversed. The organization has limited financial support to scale up the project according to design.

4. Recommendations: Urgent financial from our development partners to enable the project to sustain its intended goal is required.

5. Testimony from one beneficiary: Kaseya Monica is a twelve years old girl orphan who lost both of her parents at the age of five years. She has been living with her distant relatives but under very difficult circumstances because she has been forced to sustain her livelihood through child labour. The organization located her in Kagumu trading center on 2/14th/2011 at 8:00pm selling roasted g-nuts. When she was queried why she was doing so, she narrated that this activity is the source of her livehood in terms of food, school fees and other human basics. She narrated how she had lost her parents at the age of five years and how the world over turned since that fateful day. She noted that the loss parents at tender age, is not only stressful but horrible. That it expenses to the full force and weight of the vagaries of a society that is devoid of any social safety framework for orphans and other vulnerable children. This girl was used as a living story of what many orphans are going during the community fundraising event in which money was raised to purchase an improved goat for her. 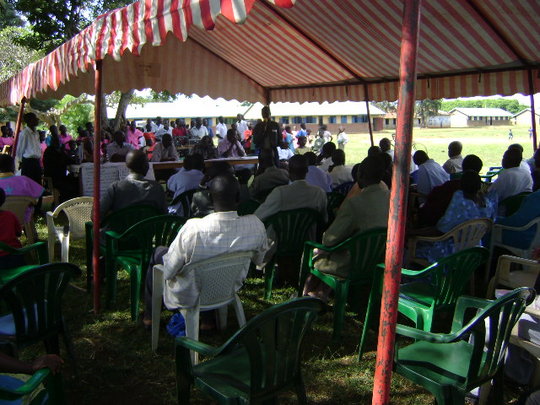 ‹ 1 ... 21 22 23 24 25 26 27 28 29
WARNING: Javascript is currently disabled or is not available in your browser. GlobalGiving makes extensive use of Javascript and will not function properly with Javascript disabled. Please enable Javascript and refresh this page.