There is been a lot of turbulence in the organization in the last 6 months...one reason for the delay of this report. My sincere apologies...I will not say we have solved the crises...but we are on track finding the solutions.The challenges started with a land owner asking us to vacate the premises meant for the economic rehabilitation of victims of trafficking. Over 200 rehabilitated survivors work in this campus. This was followed by series of backlash due to the 'ShameTheRapist" Campaign. The attack on the office and on my vehicle created a serious crises within the organization, consequently there was distress resignation of 21 staff all within a span of 2months. All interventions suffered...out of no choice we were forced to take an important decision to move to a safe location where easy access to the offce would be avoided and staff could work in a safe environment.

Thus started a new mission to 'secure Prajwala' . The attached power point will give you a fairly good idea on the challenges and the solution we have found...so it is a lot of work time...with land purchase...construction etc....

This period is landmark for multiple reasons. Thereapeutic Community is showing remarkable results, the impact of which is felt in the increasing attacks on the organization. A clear indication to the fact that the organized criminal syndicate which runs sex trafficking is actually impacted by our interventions.There was an attack engineered with traffickers posing as victims being admitted in the shelter.

The increasing number of victims who are testifying against their perpetrators is heart-warming. The conviction rate has vastly improved. This clearly shows that the thereapeutic community is successful model.

The murder of a survivor who had testified against her traffickers was traumatizing moment which demoralized the entire team. But we are more inspired and committed in our fight against sex crimes and sex trafficking today more than ever.

An incident in february lead to an international campaign which is now bringing shivers in the lives of all sex offenders. It all started with two rape videos that was being circulated on 'whatapp'. The sense of outrage and anger  with this blatant display of impunity lead to 'shametherapist' campaign. A first of its kind in the world where pictures of sex offenders captured from these videos was posted on social media with an appeal to identify the person. The campaign took a life of its own with the Supreme Court taking note of this issue and taking it up suo motto directing the Central Bureau of Investigation to investigate all the videos. Three people have been arrested and over 20 more have been identified.

The campaign which is unique also has been sending a message of zero tolerance to any sex offence.

A new challenge faced is the need for an emergency shelter which requires increased financial support, and I take this opportunity to request each of our friends and patrons to contribute for this new shelter, we require half a million dollars to set this place.

The emergency shelter will take care of all new victims and also become the screening point for traffickers and motivating space for further rehabilitation. We hope to support around 400 victims a year in this emergency shelter. 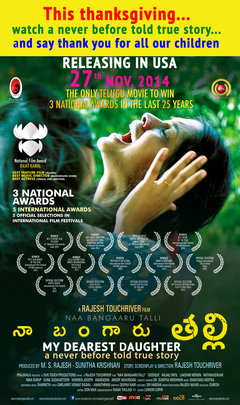 The film went all over the place

Prajwala is taken one more leap in sensitizing the public about sex trafficking and its damages. A feature film made in a format which is easy for mass viewing is the organization latest weapon for awakening the masses to this organized crime.

“Naa Bangaaru Talli”( My Dearest Daughter) a feature film in telugu made waves before it reached the theaters. With five international awards in various International Festivals and with 3 National Awards the film was creating history of sorts before it reached the masses through the theaters. In the telugu film industry it was the first time that a telugu film had got 3 awards for the same film in the last 25 years.

With a lot of struggle, but ultimately people’ power triumphed as Naa Bangaaru Talli became the first telugu film to reach the theaters(distributed) by crowd-funding.

The film ran for over 6 weeks with great public response. Due to financial constraints the film showed only in limited theaters, but the impact for the same was 100%.

The film is based on a true story of sex trafficking and is about a middle class father and daughter who are caught in the vicious trap of this organized crime.