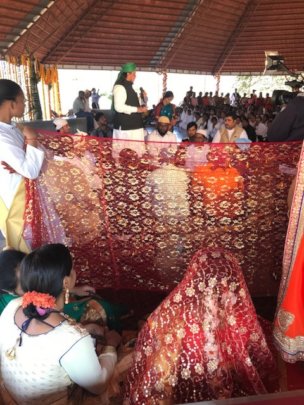 It was indeed a unique moment for all of us when two of our survivors were married in an extraordinary ceremony.

Zareen was rescued from a 'spa'. Even weeks after the rescue, Zareen was hostile and aggressive.It took over 3 months for her to trust us and start confiding her fear, anger and guilt. An orphan with nowhere to go, Zareen was duped by a friend and sold into a 'spa' which was just a front for a prostitution racket. Her friend's betrayal left a deep scar in her mind and she was wary of any offer of support from anybody. Even in prostitution a first-time customer who fell in love with her had continously motivated her to escape from that place, but her distrust in human beings did not allow her to take that plunge.Her perception about the police and the justice delivery system made her hostile to the entire system. Intense truama care sessions,counseling and life-skills for over 6 months helped Zareen to recover and look at life with more positivity. She refreshed her training in beauty care and psyhiotherapy and joined a holistic health care center where she met her life-partner.

Sirisha had run away from her home unable to bear the torture of her step-mother. While waiting in the railway station, she met a friendly aunty who offered her a safe employment in her house. Trusting the nice-looking woman, Sirisha went to her house where she was kept in great luxury for the next 10 days and even offered job-training. On the 11th day the lady took Sirisha to an apartment in the pretext of meeting a friend. The lady left Sirisha fiegning some excuse about some outside work. As Sirisha trusted the woman she did not feel any anxiety. But when the lady did not return even after couple of hours,Sirisha was worried. When she asked the person in the house, they said she might be delayed due to traffic or some other issue. After a day, Sirisha was panicking. When she asked the person in the house she said maybe she had an accident and offered to take Sirisha to the lady's house. A man & a woman took her in a shaded car to another place(which Sirisha is unable to recognize) and took her to an independent house. When Sirisha asked where the lady was, they said she will come in a few hours. After a while Sirisha knew she was trapped in something disastrous. There was no escape. Much later Sirisha came to know she was sold by the lady to these traffickers. In an inter-state operation Sirisha was rescued. After all the thereapeutic interventions, Sirisha is now working in a Super-market where she met her future life-partner.

Zareen and Sirisha were married to their chosen life-partners after due diligence of the grooms in a unique ceremony. The ceremony had one wedding performed as per Islamic rituals and the other as per Vedic Rituals. It is defintely a rare sight to have Hindus and Muslims perform their marriage in a common venue. The Mosque Committe and the Hindu Priest spoke about the lesson in humanity that had learnt on that day.

For all the children and girls in the therapeutic community it was a testimony of hope in their lives. The marriage ceremony was performed in the Prayer Hall of the Therapeutic Community. 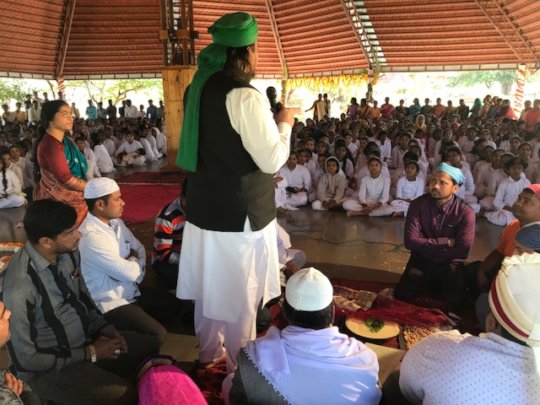 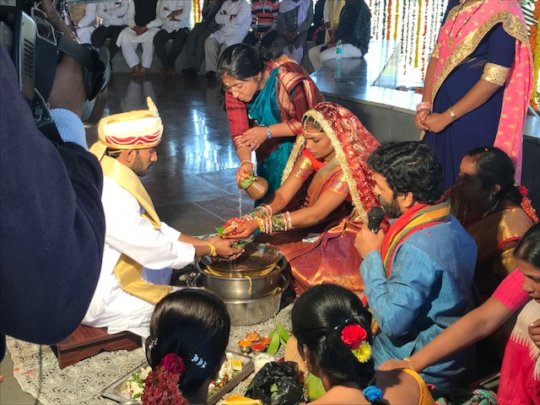 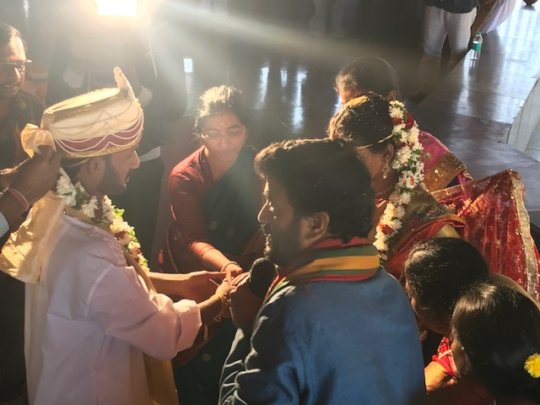 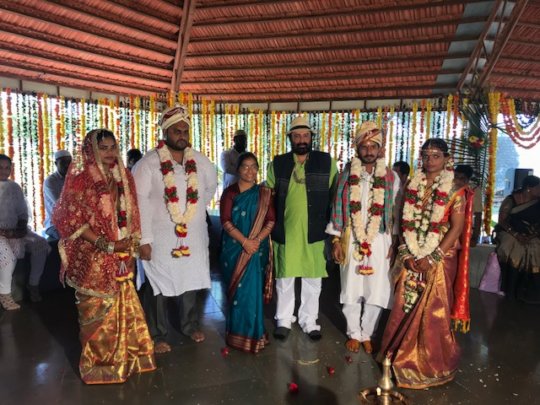 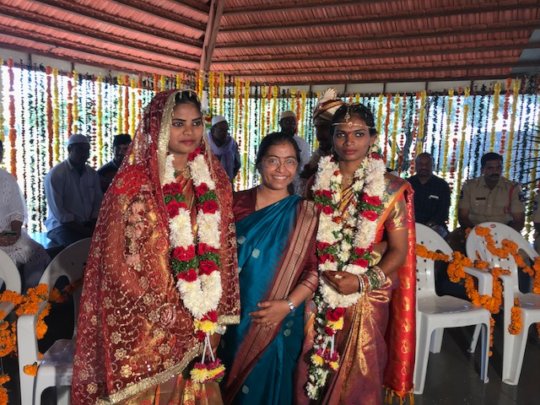 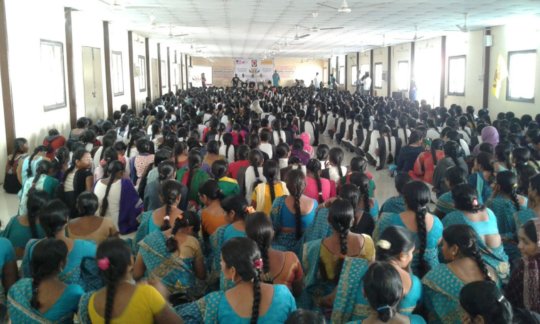 The 2015 United States Trafficking in Persons report released in July 2015 reiterated that “No nation can end modern slavery alone. Eliminating this global scourge requires a global solution. It also cannot be solved by governments alone. The private sector, academic institutions, civil society, the legal community, and consumers can all help to address the factors that allow human trafficking to flourish. Human trafficking is not a problem to be managed; it is a crime to be stopped.”

Prajwala along with the US Consulate of Hyderabad launched a unique campaign to counter human trafficking, especially for sexual exploitation. The campaign – Swaraksha which means self-protection recognizes that the crime of human trafficking can be stopped only through the concerted efforts of all stakeholders, which includes the general public. The magnitude of the problem calls for a magnitude of response and this is what Swaraksha aimed to do. Swaraksha is a response to the problem of silence that surrounds the issue of human trafficking for sexual exploitation and aims to break that silence by awakening the communities. Swaraksha is based on the principle of fostering ownership at the local levels and building capacities for local communities and stakeholders to take ownership and take the movement forward.

Swaraksha the caravan travelled across three states - Andhra Pradesh, Telangana and Orissa.Flagged off on January 9th, 2016, from Ravindra Bharati Auditorium in Hyderabad, Telanagana, since then has covered all the 53 districts of Telangana Andhra Pradesh and Odisha targeting 132 million population. The response has been tremendous with participation from different stakeholders at different levels.

The caravan which moved for 165 days covering all the districts of the three states and completed its journey on 22nd May 2016 at Bhubneshwar.

This extraordinary caravan surpassed all expectations and reached out to 1 million population directly, 112 suspected cases of trafficking was reported and 40 trafficking offenders came out and disclosed their crime before the community.

In a first of its kind, the caravan demonstrated a unique partnership between Government Department such as Dept of Women & Child Welfare, Home and State Legal Services Authority with civil society partners.

The impact of this community awakening campaign lead to Government of Telangana adopting this as a government program by declaring 3rd Saturday of every month as Swaraksha Day. The government to that effect issued a government order which is now being implemented from September 2017.

Milestones that keeps us going 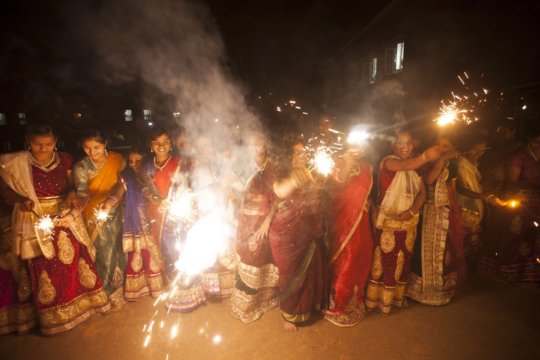 Shakila was just 4years old when a Head Constable spotted her next to a men's toilet in a busy bus station. Something about the look on the child's face made the young police man shudder. It was 9pm, and the police man was off duty and was due to board a bus at 11pm to go to his native village. After drinking a cup of tea when the police man once again saw the child 20 mins later, he saw a man was pawing the child and thrusting some loose notes in her frock. Immediately the police took a spot decision and called me up. This man had attended a training program where I was one of the resource person. I had given my number to the trainees to inform me if they came across any child who was in difficult circumstances. As soon as I recieved the call, I rushed my team to the bus station. My team found the girl in a doped state staring vacantly. Rescue was difficult as it was in a public place, and lot of commotion was created when the team tried to move the child with onlookers reacting and making snide comments. Some strange looking men and women came running fighting with my team to hand over the child as they claimed to be the gaurdian. The police man took charge,shouted at the claimants asking them to come to the station and ensured that the child was safely in my team's hand.

Throughout the journey to the safe home/therapeutic community the child murmured about some liquid and coins. The next few days where a nightmare for the entire team. As the child was a substance abuser and was addicted to thinner and to type-writer eraser. Her body had nail and pinch marks all over and her groin was severely infected. It was very evident that the child was sexually abused/assaulted for a long period and was dependent completely on drugs to keep her going throughout the day. The withdrawal symptoms took weeks to subside. In the meantime some people went to the court and filed kidnap case against us. Investigations revealed that the child was in no way connected to any one of them. On the direction of the legally competant body Shakila was handed over us for further rehabilitation. Shakila was an abondoned child, and inspite of all efforts we could not trace out anything about her past. Shakila was admitted in our Children's Home in the Therapeutic Community.

Today Shakila is 14yrs old, she is a topper in her high school and has just cleared a competitive entrance exam that qualifies her to be admitted in the prestigous Gurukula School( A residential school with high standards of education). The achievements of Shakila and hundreds like her is the true milestone that keeps us going in our mission.

Thanks to this thereapeutic community thousands of severely absued children heal and recover and start a new life. And if they are provided access to opportunities they are no less than any other child.

Lets together create an enabling environment for these children to have a chance in life!