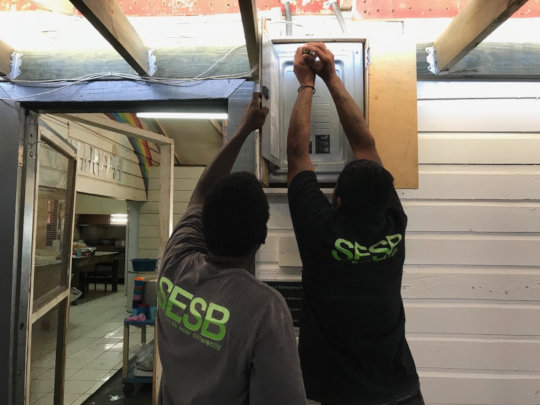 I am very happy to report that our Phase 3 system continues to function smoothly and is creating significant savings in day-to-day operations at Holy Cross Anglican School. Over the 3 month period ending 12/24/2018, power consumption through this meter/breaker amounted to 7.36MWh (Megawatt-hours), with the solar array producing 3.17MWh -- meeting 43% of our needs for this part of the school. Over the last month, as temperatures have cooled and A/C demands (used in the computer learning lab and staff office) have decreased, we have needed 1.67MWh and generated 0.866MWh, providing 51% of our power demands. Unfortunately --- it could be better if BEL (Belize Electricity) would just allow some sort of net-metering --- but they are still not offering such a program after many years of stating they would begin one. As long as this remains the case, the Phase 3 system is pretty much maxed out in terms of the benefits we can expect in the near term.

Further, we have completed some overdue repairs on our Phase 2 system. These repairs became necessary  do to a combination of problems with individual panel micro-inverters and issues with wiring. In many developing world locations, structures are not well protected from invasive species like mice and rats that enjoy gnawing on electrical wiring -- and our school is among those that has such a problem. The work converted the Phase 2 array -- which consists of 20 250Watt TRINA solar panels -- from micro-inverters to two string inverters, and repaired/protected the wiring. Due to temperature in Belize, age of the modules and the fact that it is an “East-West" lay-out, the max we are expecting is around 4.3KW, and we have already seen a day when we achieved 4.1KW (kilowatts -- noting that KW and MW are measures of the rate at which power is generated, whereas KWh and MWh are measures of the total generated. Analogy: think of a rain gauge -- it measures the total that fell (like MWh); and if I know how long it took it to fall, I could calculate the rate, like MW). The existing  e-Gauge is back on-line, displaying the PV production and the energy usage from BEL (see earlier reports for URL).

By comparison with Phase 3, over the last 3 months, power consumption through this meter/breaker amounted to 5.64MWh, with the solar array producing only 1.23MWh, lower than expected due to the problems with the micro-inverters (21% offset). The repairs were completed a little less than a month ago, and during this period we generated about 27% of total demand. Thus, we believe even if BEL net-metering policies do not change, there is room to add additional panels to "this side of the house." I've attached a few pictures from the repair crew.

Thus, thanks to you, our generous supporters, we are officially on to Phase 4!! In the next few months, we will re-visit all options for Phase 4 -- including the possibility of investing in some battery storage, since it would be prudent to be able to store power (rather than send it back to BEL when we over-generate), and then use it at a later time, like overnight. I will review the results of our Phase 4 planning period in the next report. We want also to extend sincere thanks to Baker Renewable Energy in Raleigh and Solar Energy Solutions Belize in Belmopan for their partnership on the project.

May you each have a meaningful and peaceful holiday season and New Year ahead. 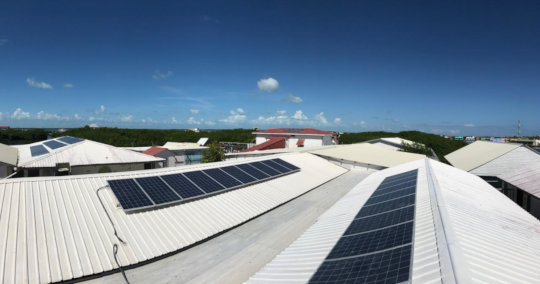 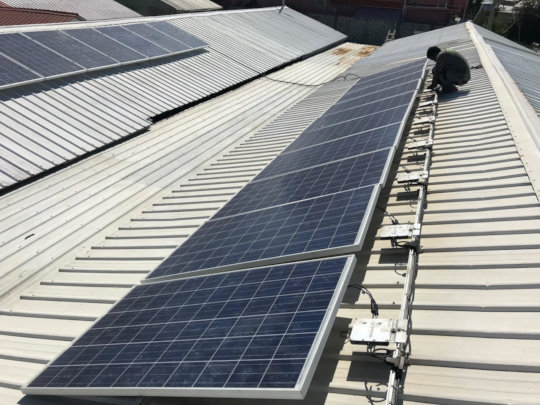 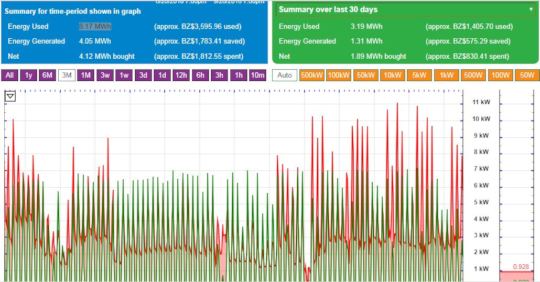 Our Phase 3 solar system has now been online for nearly 4 months, and we have collected "egauge" data during that time. The data show that while school was on summer break, our system was "near perfect" in matching solar production with demand through that particular meter during daytime production hours. Of course, we don't have any battery backup (yet), so we cannot offset any nighttime usage.

As I noted in my previous report, the "egauge" that is collecting this data is available online at http://egauge31746.egaug.es/57A4C/

On average, over the summer, we generated more than 60% of demand --- but now that school is back in session, that percentage drops to about 40%. Overall, if one looks at the last 3 months of continuous data, we have used 8.17 MWh of energy, and generated 4.05MWh. This vast improvement could not have happened without your support.

In my last report, I mentioned that we continue to watch several transient issues that may -- or may not -- need further attention. As it turns out, something in the connectivity (cables, micro-inverter system, etc.) has failed on System 2 (the URL is: http://egauge31747.egaug.es/57verA4C/). Because the string inverter with the new "Sunny Boy" DC/AC unit that was installed for Phase 3 solar is not subject to heat/humidity/salt exposure, we are proposing to replace the "connectivity" component on System 2 with what we are using on Phase 3. Our quote is on the order of $5000.00USD.

We hope to have this work done in the next few months. I've enclosed an image showing the monitoring results of the Phase 3 install, and again, we could not have done it without your support. Thanks to one and all of you!! Warmly,John 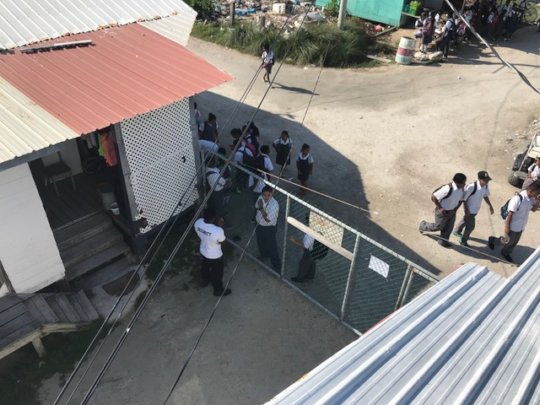 The installation of our new, Phase 3 solar array at Holy Cross Anglican School has been completed and the new, 5.5KW (at peak production) array is now producing power!! I am thrilled to report that the schedule we envisioned at last report was fully executed thanks to all parties involved. By the time I arrived the week of April 2nd, the 20 new panels and peripheral gear had been shipped and were being stored -- gratis -- by our partners at Harmouch hardware in San Pedro.Thank you Harmouch!

Along with myself, the two technicians from Baker Renewable rendevous'ed with the lead technical expert from Solar Energy Solutions Belize (SESB). As planned, we conducted an inventory of the equipment and found nothing awry. SESB also completed its final site survey in preparation for their technical team coming back in a few weeks to do the actual install.

In the meantime, the BRE folks removed the Phase 1 array from the office-complex roof and inspected each of the original panels for defects or damage incurred over the last five years. They found seven that were in "near perfect" condition, while another 12 had suffered some degradation but were still in usable condition. Five others were deemed unusable due to defects that have been been traced to problems with the original manufacturer. The BRE technicians located the seven best panels on an adjacent roof, while, in parallel, my work team removed and replaced the office complex roof. We then applied white, reflective coat paint, leaving a pristine surface onto which the new Phase 3 array would be installed.

In early May, the SESB team returned to HCAS and assembled the Phase 3 panels, fixing them to the newly painted roof. In addition, the 12 older panels were also re-mounted onto a third string of panels on that same south facing roof (pictures attached). At first, the combination of the older seven and the newer 20 were turned on so that power production in relation to power demand could be monitored. After about a month of gathering data, it was clear that demand was still outpacing production enough that the additional 12 could also be turned on without risking much overproduction.

The "egauge" monitoring has proven invaluable. It lets us get a daily, realtime view of demand versus production on both the combined Phase 1/Phase 3 (Office complex) system and the Phase 2 (classroom/cafeteria) system. When these monitors are not available online, it alerts us to the possibility of either an internet problem or some other issue that needs attention. This makes troubleshooting very much easier. If you are interested, the egauge URL for System 1/3 is http://egauge31746.egaug.es/57A4C/ ; the URL for System 2 is: http://egauge31747.egaug.es/57A4C/

The data show that on near-cloudless days, System 2 is peaking at just under 4KW, whereas our peak demand is often near 8KW. Conversely, the newly combined Phase 1/3 System is now peaking at just over 7KW, and we have seen demand as high as 17KW! Clearly, there is plenty of "spare room" for adding more power under the current demand load. Further, with the projected addition of a new multipurpose building, there is no doubt that further solar production will be needed. We also have to remember that these PV panels are sensitive to heat and do not produce as much power in tropical climates as they would in more temperate climates where the panel ambient temperatures are cooler. This impact can cost up to 20% of peak theoretical production, and, indeed, we are seeing that in our monitoring data.

We continue to watch several transient issues that may -- or may not -- need further attention,and I will update you on their outcome as well as "next steps" for continuing to grow our PV capacity upon my next report.

Thanks so very very much to all YOU, for making possible the reduction in operating costs at a school that -- because of its service to the poor and disadvantaged children of San Mateo, cannot yet afford to fully pay its monthly electric bills. Thank you, thank you, and even more -- thank you!! 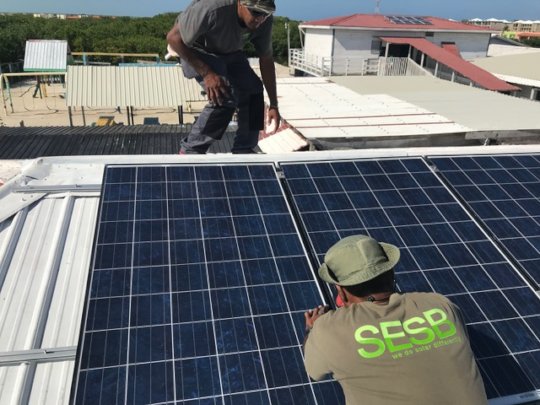 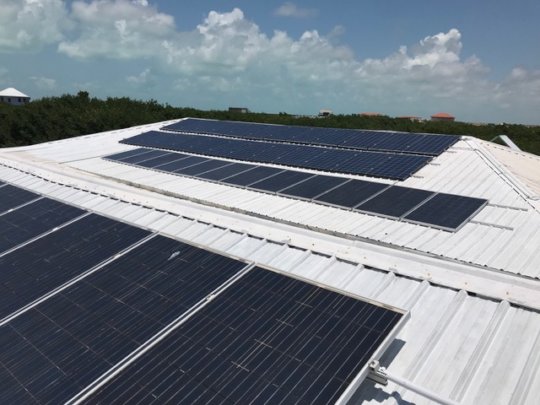 Egauge graph showing full capacity Systems 1/3
‹ 1 2 3 4 5 6 7 8 9 ... 14 ›
WARNING: Javascript is currently disabled or is not available in your browser. GlobalGiving makes extensive use of Javascript and will not function properly with Javascript disabled. Please enable Javascript and refresh this page.