Community responds to the ongoing record drought due to El Nino 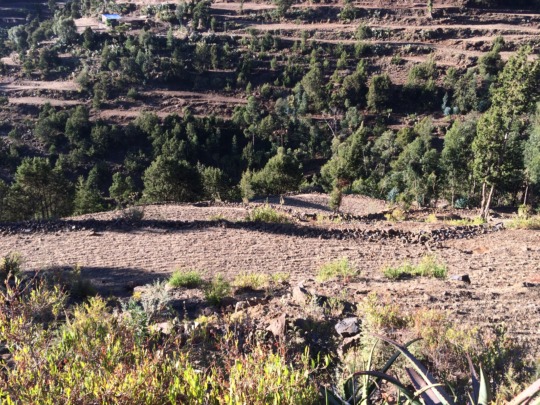 The focus of the quarter has been on responding to the current drought due to el nino. The summer rainfall in the village has been very disappointing. If it was not for the safety net program of the country there could have been famine. In the villag of Atebes there were only 6 adequate rainfall days in the summer leading to the collapse of agriculture.

As reported earlier, the water harvesting systems the project developed have been very useful as storage of water relief coming from the government. The two 20,000-liter capacity roof water harvesting system in the church are cleaned and serving as collection of drinking water being delivered by trucks. The 65 cubic meter concrete surface water harvesting tank is being used to store water form the trucks for animals.

Another important activity by the community and the local development agents is the construction of soil and water conservation systems on the slops. This is to help any rain in the futue to be recharged and capture the soil that is often eroded. This will contirbute to future soil fertility and imrpoved stream system for the people.

Again, we will keep you updated about our activities in the future.

Thank you for your support and for becoming change agents. 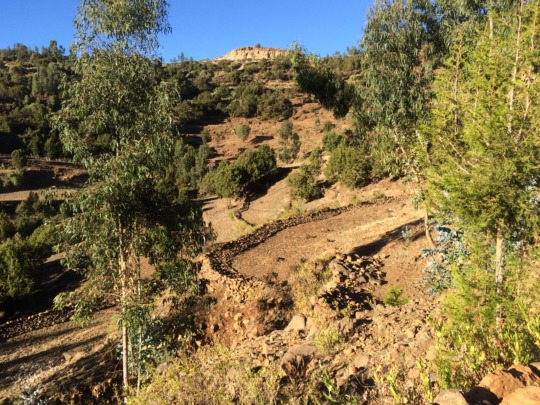 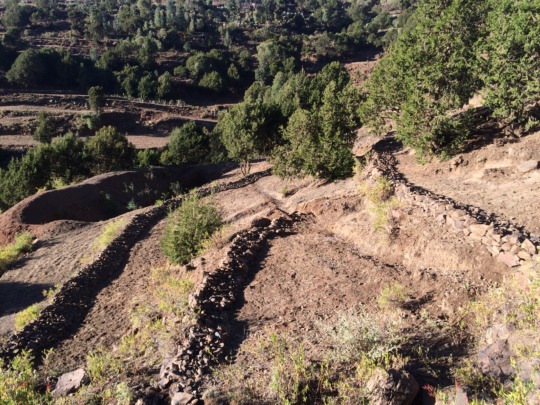 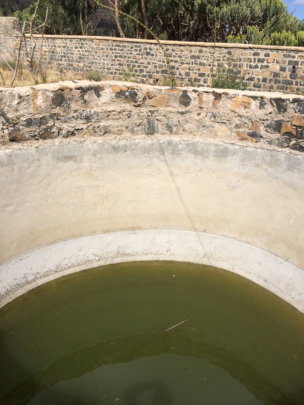 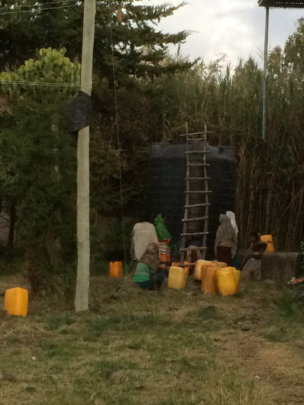 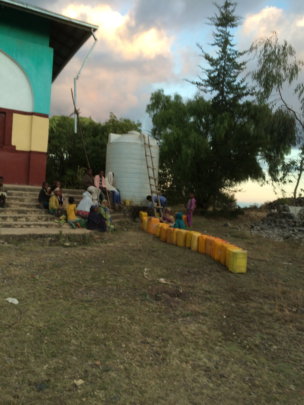 waiting for water brought by tankers 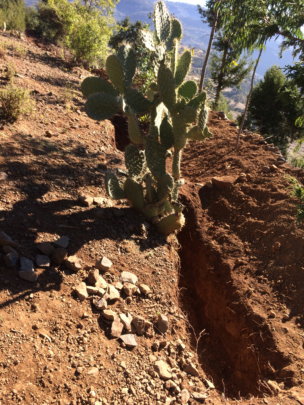 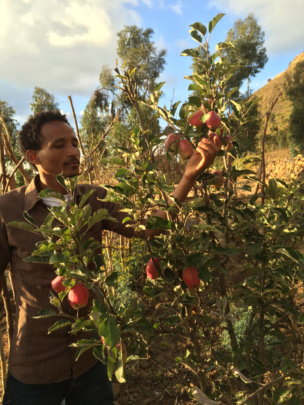 The apple have given fruit

Sorry for the delayed report. I wanted to share an original and personal information directly from the field.

I arrived at the project site on Sunday December 20 and stayed for two days. I visited the pilot project and was dismayed to see an empty surface reservoir. When I asked why it is not full 4 months after the end of the rainy season, the adults told me that in July and August there were only 6 days of rainfall. Those rains were not even strong. They added that any water that is in the reservoir was a left over from water collected before the rainy season. Fortunately, the apples in the pilot project are in hibernation and none of them have dried.

The 2015/16 super El Nino that is making havoc around the world drives the drought in Ethiopia. Ethiopia not is in a disaster management mood. Food is being imported and tankers are distributing water. The infrastructure developed by the Ethiopian government has made it ready to manage the crisis. For example the new railroad from the port city of Djibouti to Addis Ababa has enabled the imported food to be distributed to the people very efficiently.

The infrastructure of the pilot project was found to be handy to be filled with water being freely distributed and stored. While other villages have to wait for the tanker to get their water into the containers and water until the next arrival, the people in the village of Atebes have cleaned up the two plastic tankers to be filled with water. They are now ready to clean the surface water harvesting concrete tanker to be filled with three tankers. The people are now more excited that the first time the project constructed the tankers to water the apples in the demonstration site.  All the streams in the village have dried except the one with in situ water harvesting system the project constructed.

Another good story I want to share is that several farmers have witnessed the increased production in apples. Some have harvested 80 apple fruits while other has harvested forty or fifty fruits. I ate one apple from one tree after being offered and found it very tasty.

Again thank you and congratulations for your contribution. Usually, unintended consequences are negative. In the case of our project the untended consequences the development of an infrastructure that contributed to the reduction of vulnerability and support for drought risk management. Please keep on doing the great job and thank you for your support. Any support you give to this project going to strengthen the capacity of the people to cope with any disaster impacts including the 2015/16 Super El Nino. 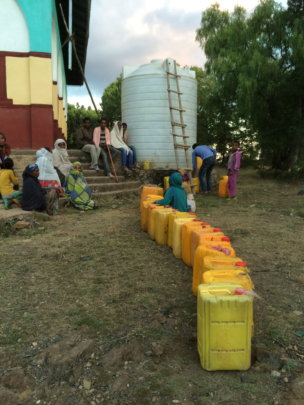 tankers being used for water distribution

empty reservoir will be filled by water tankers 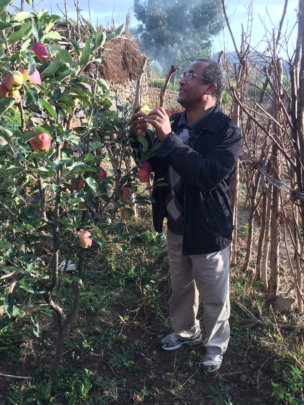 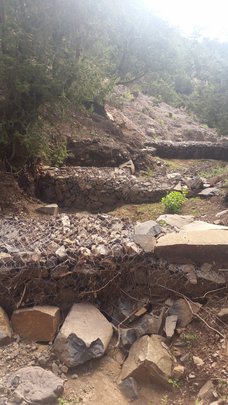 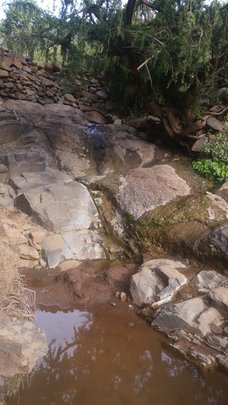 There should have been more water than this 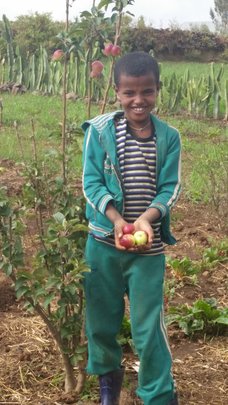 Optimism due to the maturity of the apple fruits 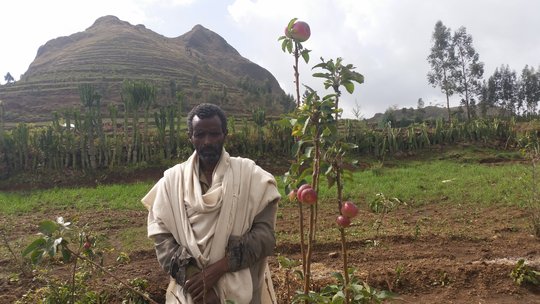 Ato Hailemariam around the houshold apple 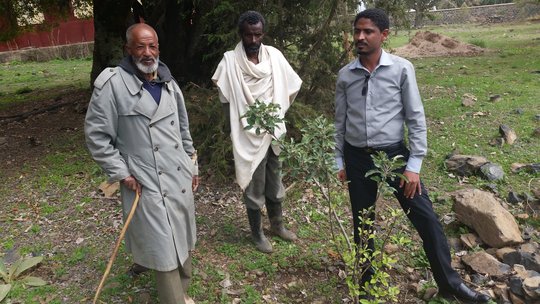 Amanuel Gebru with Ato Hailu and Ato Hailemariam
‹ 1 ... 4 5 6 7 8 9 10 11 ... 14 ›
WARNING: Javascript is currently disabled or is not available in your browser. GlobalGiving makes extensive use of Javascript and will not function properly with Javascript disabled. Please enable Javascript and refresh this page.