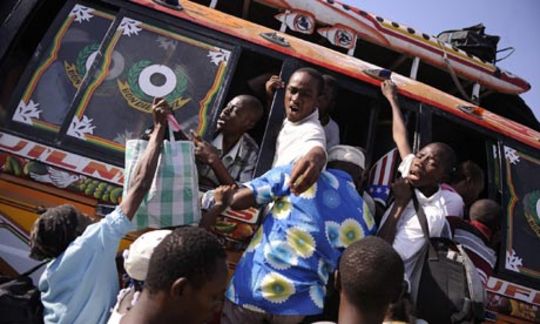 The days following the earthquake were a busy and stressful time for Lambi Fund. Contacting staff and partner organizations proved to be a difficult task given the lack of phone service, power, internet and destruction of major roads to rural communities.

On January 16, 2010 staff in the US finally heard from Lambi Fund’s country director in Haiti. While staff in Haiti have been struggling to survive in a city that has been demolished, we here overjoyed to hear that all Lambi Fund staff members were alive and suffered relatively minor injuries.

January 18, 2010: Lambi Fund Country Director Josette Perard finally made it through the debris and checkpoints to our office space located in downtown Port-au-Prince. It sustained damages but is still standing! Important documents and equipment were salvaged for the time being as it lacked electricity needed for the office to be functional.

January 19-24, 2010: Staff have been working out of our Field Coordinator’s house; one of the few houses still standing that has electricity. Lambi Fund’s office building is being used as shelter for those that have been displaced.

Several Lambi Fund led regional meetings have convened in rural communities outside, under trees throughout Haiti. These communities are currently experiencing tremendous rates of outmigration that are severely stressing already limited resources. The 1,000’s of refugees streaming into these villages daily desperately need immediate relief. As such our local partner organizations and Lambi Fund have begun distributing major essentials like food, water and medical supplies to displaced persons. Shelters are in the process of being built as well.

January 25, 2010: Staff finally managed to purchase gas for Lambi Fund’s generator. The office has electricity, is up and running and is fully operational! Continued discussions with grassroots organizations in rural communities have led to the development of a four-phase recovery plan that will be critical in Haiti’s long-term recovery:

1. Distribute food and emergency essentials to those migrating from Port-au-Prince to rural areas. 2. Repair damage in rural communities 3. Expand sustainable agriculture programs to meet the increased demand for food in rural areas 4. Increase opportunities for sustainable income for those displaced by the earthquake so that the influx of people migrating to countryside can start earning sustainable livelihoods

Play a major role in expanding resources, rebuilding, and providing refugees with the means for economic livelihoods in rural communities by supporting this important long-term recovery program in Haiti today. 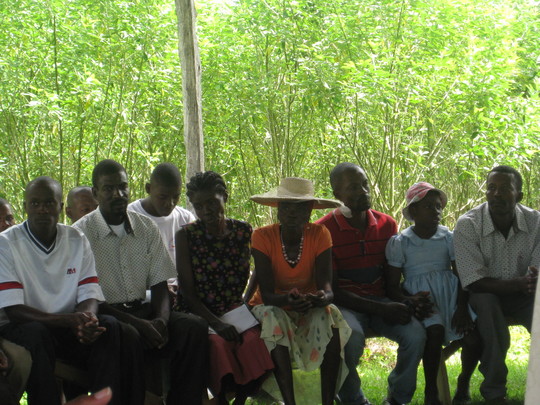 During our last visit to Kasis, members of the organization’s council prayed and sang songs of gratitude for their donors from overseas who have “placed their faith and treasures in the hands of us poor farmers from Kasis”. The pig breeding project is going well. The revenue generated by the organization from selling pigs at markets has been used to create a credit fund. Under ADZK's management, the loans are given out to farmers and market women. With ADZK’s support local farmers are able to buy farming tools and the resources they need to make their land more productive. The women are able to increase the profits they make from selling products at the local markets. The nurseries also symbolize Kasis’ “ can do” spirit! Last year’s hurricanes and ensuing floods brought great destruction to the village. Animals and trees were carried away by the raging waters. With the support of the Lambi Fund’s hurricane funds, ADZK's members restocked their nurseries and have been busy growing seedlings and planting trees. ADZK members’ are strong believers that civic engagement is an integral part of their strategy for sustainability. At the organization’s last elections, most of the posts for executive council were contested with an unprecedented number of three contenders running for president…. That’s democracy in action! This project’s success reflects the determination of the people of Kasis to rebuild, replant, grow and persevere in spite of the daily challenges they face.

Almost 1/3 of Haitians have no access to safe drinking water, resulting in disease and a high death rate for children. Haiti is described by the U.N. as one of the most degraded countries in the world. Without trees to protect the land, flooding from hurricanes destroys homes, lives, farmland and ecosystems. Our poorest neighbor in the Western Hemisphere needs an urgent plan to plant trees and provide safe water for 600 peasants in the village of Chato.

Peasants in Chato asked Lambi to help build a network of 10 water cisterns. They also want to reforest the area with 100,000 trees. They will provide the labor and, with your help, Lambi will provide construction materials, training and seedlings

Ten cisterns have been built. In the aftermath of the hurricanes which pounded on the entire country in August and September 2008, it was reported that 2 of the cisterns sustained some damage. Funding received for Hurricane relief was used to repair damaged cisterns.

Chato’s reforestation efforts are in full operation. About 50,000 fruit and forest tree seedlings were produced during the second phase, however Chato reported losses of seedlings to the hurricane season. The hurricanes caused many delays in replanting schedules, however farmers have resumed their activities. They have planted young trees and have begun the production of 35,000 seedlings. About 13,000 seedlings prepared for reforestation have been planted. Members of the organization have convened collective workgroups called ‘Konbits” to plant those seedlings in areas impacted by the hurricanes. They have also met with members of neighboring communities to discuss the containment of goats known to “graze” on young trees.

The cisterns brought great relief to the community of Chato. Children and more particularly girls from Chato no longer have to walk miles to the nearest water source and can now go to school on a regular basis. Sustainable reforestation will have an impact on the environment and will help peasants earn a living through the sale of fruits at local markets. Joseph Clervil, Chato resident stresses that they have learned more than planting trees “We understand through our experience that we must engage our neighboring villagers to reforest as well.” He adds that they have proceeded to share with neighbors information and knowledge acquired from Lambi Fund’s sustainable reforestation workshops.

‹ 1 ... 84 85 86 87 88 89 90 91 ... 93 ›
WARNING: Javascript is currently disabled or is not available in your browser. GlobalGiving makes extensive use of Javascript and will not function properly with Javascript disabled. Please enable Javascript and refresh this page.