By Dr. Danny M. Cohen - Unsilence Founder & Interim Executive Director
Thank you for supporting Unsilence's work with The Sisterhood, a collective of Chicago mothers - all women of color - each of whom has lost a child to gun violence. We're happy to let you know that, with the guidance of a clinical social worker and graduate student content experts, we've already collected testimonies from around a dozen Sisterhood mothers.
The next step is for renowned artist Cecil McDonald, Jr. to photograph the mothers and create a series of compelling artworks. We'll be combining the mothers' stories with the artworks to create an original Unsilence online exhibition. Later this year, we'll launch the exhibition, alongside a new Unsilence education program for schools and communities, to spark urgent conversations about gun violence, racism, trauma, and resilience.
You can learn more about our work with The Sisterhood, right here. Thank you for supporting our work. We can't unsilence without you!
Mar 8, 2019

In the past few months, Unsilence has completed a number of focus groups with a diverse group of audience participants. The goal of these focus groups was to determine the overall impact of the TOMORROW interactive digital feature as a means to increase empathy in participants around the difficult nature of talking about suicide in schools.

Although we are analyzing the data and putting together a full report, we wanted to give you a sneak peek of the results!

Some of the particpants responded with the following:

"I think TOMORROW is a good starting point for people who are not- who don't know a lot about suicide, or don't talk about it. It's a narrative, which means it's a way to get across about going to a teacher, to somebody, in a plain, mundane way. It makes you invested."

"I think the way TOMORROW is set up is very smart, like, choose your own adventure - also, the different perspectives, because I'd never thought about it from the teacher's, or administrator's point of view. That's very important to understand other people's point of view. No matter where you are in life, if you're the student or you're the administrator. How people are feeling, how people deal with things is very different. Everyone's point of view should be acknowledged. I thought about that through the whole process."

"Being able to choose what we do next makes you engage more with it, and think about the relative merits of each of these choices, more than you would if you were just given a list of best practices."

Participants were given a form of the Social Empathy Index before and after each workshop. Scores showed an increase in empathy. According to a t-test this showed to be a significant increase. 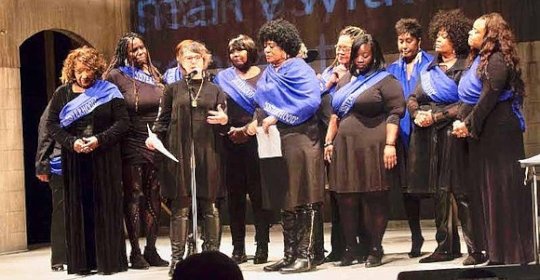 The Sisterhood at November's Sounds of Unsilence

We have had a busy and eventful end of 2018! In November, Unsilence hosted a benefit concert, Sounds of Unsilence, featuring the music, storytelling and poetry of Chicago artists who are allied with our goal to shed light on marginalized voices. During this event, we also issued our official announcement to the public of the partnership with The Sisterhood  for 2019. The announcement was preceded by an introduction of The Sisterhood by Founder, Gwendolyn Baxter, and a musical tribute by the Bournee Family Singers to celebrate the youth lives lost to gun violence in Chicago. The event was a fundraising success, and we are excited to continue laying the development foundation to sustain our project throughout 2019.

Additionally, within the last month, Unsilence Voices: The Sisterhood has secured the participation of a licensed clinicial social worker. Erin Matthews, LCSW, will be volunteering her time to conduct the interviews of The Sisterhood mothers to source the material for their photo shoots with artist photographer, Cecil McDonald. It is important to all of us at Unsilence that their stories be handled with grace and care, so we knew we needed to bring in trauma-informed professionals to ensure we conducted these interviews in the safest and most respectful manner possible. We are extemely grateful for her professional expertise and contributions.

We are also excited to enlist the help of Andrene Wright, a PhD student at Northwestern and TA of Dr. Danny Cohen. Andrene is currently conducting research regarding black women's civic participation, and she will be volunteering as on-site coordinatorfor our intervews and photo shoots with The Sisterhood.

Scheduling for the interviews and photo shoots are underway. We plan to conduct interviews in February and begin photography in March. The ReBuild Foundation has generously allowed us access to their space to use for our interviews.

We are humbled and grateful for all of the support we have recieved to ensure Unsilence Voices: The Sisterhood is a success. I look forward to sharing these strong women's stories with you.