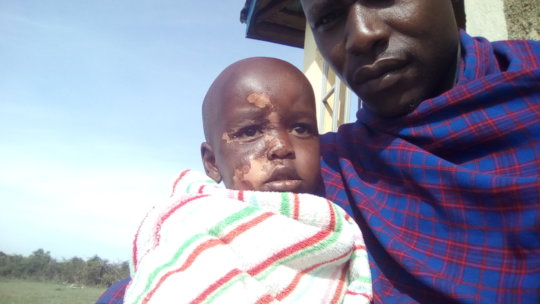 A mother's nightmare became reality when Mary was teaching.

It pains me to report that Mary's son Jayden, now two years old, was being looked after by his grandmother when he tipped over a boiling pot of water when his grandmother was making dinner.

Jayden suffered severe burns all over his body.

If you don't know who Mary is, please refer to the project report before this one. Mary is the second girl that Global Roots protected from FGM when she was just 12.

Now she is 22 and is a full time school teacher. Jayden's husband, Saruni, is in training to become an administrator for a new Global Roots program in Kenya.

Baby Jayden is recovering now, and mostly out of pain. His scars have turned white and it is not yet known if they will be permanent.

Global Roots wired $200 for Baby Jayden the minute we learned of the accident. We are now raising more funds to have Jayden transported to Nairobi where he will be treated by a specialist.

Baby Jaydon is important to Global Roots because he is the result of a marriage born out of both determination and love.

Had Mary not ran away from her village when she was born, she would have been subjected to Female Genital Mutilation and sold into a marriage. She would have been forced to give up school and break up with her boyfriend Saruni, the very man she married many years later.

Global Roots is proud to support Saruni, Mary and baby Jaydon in their time of need! 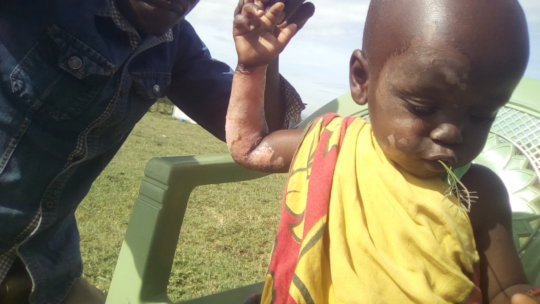 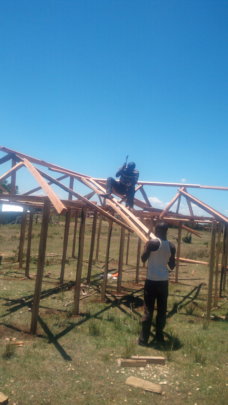 Our dream is upon us: a rescue home for young Maasai girls threatened by female genital cutting.

In 2010, a young Maasai girl named Mary K ran away from her home on the morning after she learned she was to be subjected to female genital cutting and forced marriage. Mary chose to run because she wanted to stay in school. Just 13 years old at the time, Mary didn't know about the lifetime health problems associated with genital cutting -- she just wanted to study.

Mary ran seven hours through a dangerous forest above the Maasai Mara -- the northern reach of the Serengetti -- to the home of a Maasai woman who had bravely come out publically against the brutal act of genital cutting (known more commonly as Female Genital Mutilation or FGM).

Mary tells this story herself in the previous project report. She eventually fled from the woman who took her in and then relied soley on funds sent to her by GlobalRoots.org and Global Giving donors.

I (Rick of Global Roots) met Mary in 2011 and knew immediately that she was special. Now, eight years after she ran away from home, Mary is going into her final year at Teacher's College. Furthermore, she was able to marry her childhood love.

A miracle is in the works

Mary told me when she was just a little girl that she wanted to fight for the rights of young girls like herself one day. That day is already upon us! Mary and her husband Saruni have built a rescue home for threatened Maasai girls on Saruni's father's land and with a few thousand Global Roots and Global Giving donor dollars.

Mary and Saruni have given us something we've never had before: a temporary safehouse for preteen Maasai girls who are on the run from Female Genital Cutting. Global Roots currently pays for the boarding school costs of more than 42 girls across the TransMara region of Kenya but we have never had a decent backup plan should one of our girls suddenly be sent home. Our manager in Nairobi has worked hard to set up an early warning net but we've never had a safehouse to send a threatened schoolgirl to. Now we do!

Saruni and Mary will be contacted whenever one of our girls is sent home from boarding school for any reason. A team will be sent and the young girl will be brought to Mary's home where she will remain for a few days until a Global Roots partner in Kenya can help the rescued student return to school or assist her in finding support.

If we are not there to intercept, the girl will be subjected to Female Genital Cutting and forcibly sold into marriage. She will give birth to a few children and live the rest of her life as a slave making beads for tourists -- slowly dying from the cuts of her youth.

We have attached loads of photos. Like each of our community-led grassroots projects, this one is not expensive. It's hard to believe what you can get done with a few dollars when every one of them is accounted for.

We wired only $1,200 for the construction of the rescue center and we followed the project carefully. Attached are photos that we required of benchmarked construction and on-going lists of expenses.

We spent an additional amount of money on solar power ($310) and beds ($521) on our most recent supply trip (June, 2018). Photos of my time spent with Mary and her team are also attached.

It's past time to end Female Genital Cutting in Kenya and everywhere else it is practiced.

Rick Montgomery and the Global Roots team in Kenya 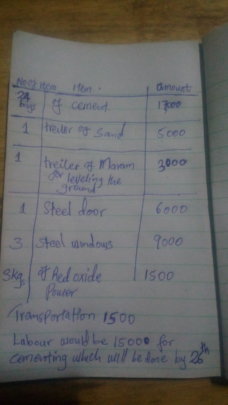 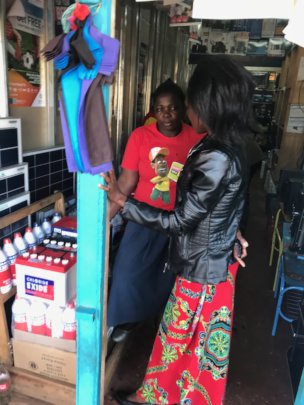 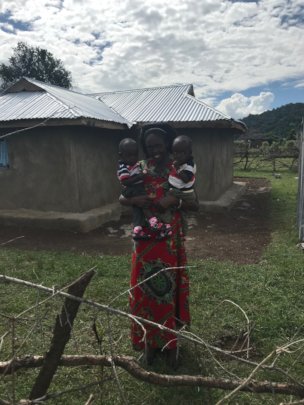 Mary with her twins in front of rescue home 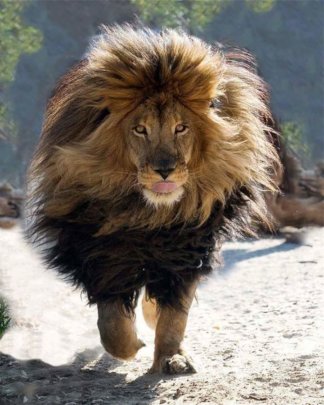 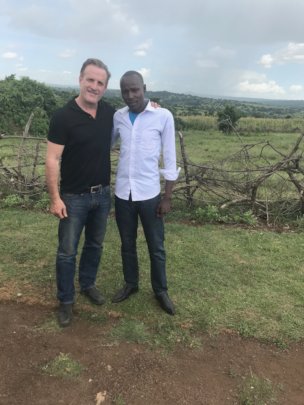 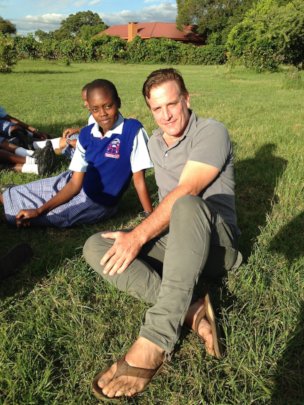 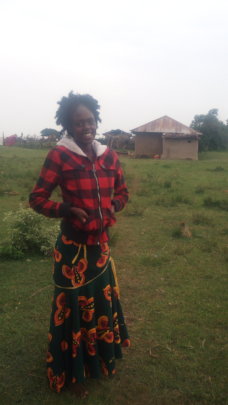 Mary today
Greetings GlobalGiving friends.
Your support means the world to our ongoing work in Kenya to stop the horrific tradition of Female Genital Cutting.
We at Global Roots have decided not to refer to it as Female Genital Mutilation because that term is disrespectful to the millions of women who have suffered it and survived. These women were unfairly cut but they survived and should not be called "mutilated".
Many young girls, however, died when their healed wounds reopened and hemorrhaged while giving birth to their first child.
What follows is a letter from Mary K. to GlobalGiving donors. Mary is the first girl we supported when she ran away from genital cutting in 2011. We are not allowed to provide Mary's full name.
We will never forget the moment we met Mary. All of us who served on that particular Global Roots supply mission were awed by Mary's strength and determination. We vowed that we would fight for her and we thank each and every GlobalGiving donor for helping us get the job done.
We will follow up this report with a detailed accounting of the 4K wire we just sent to pay for boarding school fees for girls who are currently threatened with genital cutting.
Mary is 21 now, in college and married to the man she chose and loves.
Here is Mary's letter to you.
Dear Global Giving donors.
My name is Mary K and I am 21 years old. I have been supported by Global Roots since I was 14. I would like to tell you my story because I am now a woman and I want to save more little girls like I was.
I was brought up in a humble Maasai polygamous family. My dad had five wives and along with three of his late father's wives (my grandfather) we had a population of above 40.
My parents took me to school at the age of 6 where I learned for eight years. I completed my primary school at the age of 14 of which is considered a suitable age to undergo the FGM according to my parents. FGM is the first qualification to marry me off to a man of their choice who was an old man.
This was more advantageous to them and my brothers since they will obtain wealth in form of cattle. My parents had the intentions of getting cattle to educate my brothers for they believed education was meaningless for a girl child. But before their plan could succeed, I remembered about Caroline whom I once attended a youth rally and witnessed her campaigning for the right of a girl child. She said that she was ready to support any girl being forced to undergo FGM and early marriages. This made me make a decision to escape to Carol to get an education and eventually marry a man of my choice.
On that night I told my mum that I was going to to visit my nearby aunt only to get a way to escape. The following day, I woke up early and proceeded with my journey to Carols place in Kilgoris (in the rolling hills above the Maasai Mara). I walked for seven hours to reach her. On the way, I passed through thick bushes with fierce wild animals. In addition, the journey was tedious with hunger, thirst and loneliness but my hope was to get a bright future.

When I arrived in Kilgoris, I found one passerby and I politely asked him where Carol lives. Though he was a stranger to me, he kindly showed me the way. I found Carol at her house and I told her about my problem. She welcomed me and promised to take me to secondary school as the schools would open in January the following year (2012).

In early 2012, Carol took me to Enoosaen Girls secondary school as she promised. While there, I found Rick from Global Roots who had been sponsoring Carol's girls by all means possible.

Global Roots actually supported me up to the end of my high school level and they continue to help me now.
I have found a good man of my choice to marry and I am now in college. I know that many people outside of Kenya might think that 21 is too young to marry -- but here it is not. I was able to marry the man I love and attend college -- I have Global Roots to thank for this. Rick tells me that a portion of my support comes from another group called "GlobalGiving". This my chance to thank you all.
Above all I thank God and Global Roots for their assistance. I am remain in touch with my Babu Rick. I call him my Babu (father in Swahili) because he stepped in to take care of me when my birth father wanted to cut and sell me.
My husband is a young Kenyan man who does not support FGM. He is a very intelligent man who is studying biology and wants to be a veterinerian. We have the love. I hope my Babu meets him soon.
There are so many young Maasai girls who are still threatened by FGM. Help me and help my Babu stop this ugly and unnecesary tradition.
Mary K 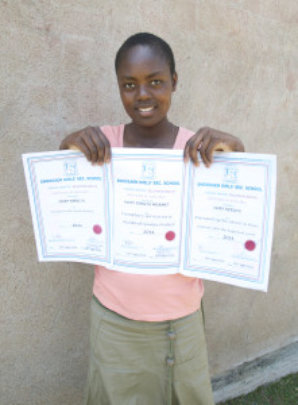 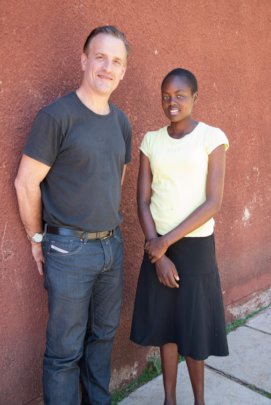 Mary and Rick
‹ 1 2 3 4 5 6 7 8 9 ... 14 ›
WARNING: Javascript is currently disabled or is not available in your browser. GlobalGiving makes extensive use of Javascript and will not function properly with Javascript disabled. Please enable Javascript and refresh this page.