You can't judge a book by it's cover. 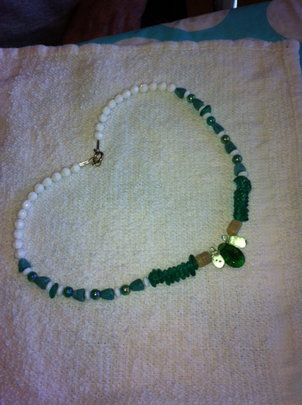 For the past year, CHAP has been working with the Adolescent & Young Adult (AYA) oncology program at Knight Cancer Institute.  The AYA patients are between the ages of 15 - 39.

The coordinator mentioned that a young man and his mother were both struggling with a recent diagnosis.  I went to that patient's door and introduced myself. He was alone. As I do with all patients, I listed the range of options I could bring to his bedside: watercolors, coloring mandalas, clay or jewelry-making. I could tell by his body language that he was going to accept something. He was on Day 6 of his stay. I think he was ready for some diversion.
Within a minute, he requested some beads. "I'll make something for my sister." Then he quickly followed with, "I should make something for my mom, too. Can I make 2 necklaces?" I gave him a resounding "Yes!" and scurried upstairs to gather the supplies.
He selected violet beads for his mom and green beads for his sister.  He told me their first names so he could customize the pieces with alphabet letter beads. When I came back to his room, he was sitting up and ready to work. I asked him if he had done any beading in recent years. He said, "Not since I was a kid." With the first necklace, he let me do the layout of the beads and he threaded them onto the string. By the second piece, he was in the driver's seat. He did the entire layout, with impressive attention to symmetry. We chatted a little bit and at other moments it was quiet. He mentioned at 2 different points that he was in excruciating back pain - but he never winced or groaned. He said it very matter-of-factly and then went back to the business at hand. For his third piece, he made himself a keychain.
By this point, we had been working together for well over an hour. A connection had been formed. He said to me, "Did you think I would say no?" Meaning - did I think he'd reject the opportunity to make art? I kind of chuckled. I said to him, "In the 4 1/2 years I have been doing this job with CHAP, I've learned to not make assumptions. You can't judge a book by its cover." I see this over & over again. The most rugged-looking cowboy from central Oregon will sit in the hospital and make beautiful beaded bracelets for his wife back at home. It's always a pleasure to see.  I've stopped being surprised.
There was one person in his life he still wanted to make something for - his aunt. Well, not technically his aunt, but rather a close family friend. She had been helping out with his hospitalization. She seemed an important player in his care-giving. I said, "Of course, you can make something for her. It sounds like she has been a great support to you." This woman recently had to return home, which was out-of-state. He said he would send it to her. He decided on red and clear crystal beads for his aunt and we put her name on it, too. He said that she was a source of steadiness, whereas his own mother was still reeling from the diagnosis. The aunt was both comfortable in the hospital setting and in her role advocating for him. She was calm and ready to do what needed to be done. She had that "one day at a time" attitude that CHAP hears so much about at the hospital. He appreciated this. He was clearly grateful to be buoyed up by his honorary aunt.
Towards the end of my shift, I went back to the patient's room to see if he had finished his final piece. Guess who was in the room? His mom and his sister - and they greeted me wearing their new necklaces. They were cheerful and delighted to receive their gifts. The mom was interested to hear about our AYA Bedside Art program. The patient was quiet now that his family was there. But I know he enjoyed it. I know he was glad he had said - 'Yes'.
Jun 27, 2013

Darkness Cannot Drive Out the Light

I find that there are no perfect words or ways to bring comfort to folks when they are experiencing pain and struggle. The best option for me is to provide my patients with an ear for genuine listening. Sometimes just a few words are expressed; sometimes it's simply facial expressions. And sometimes that is all that needs to happen to make a connection.

My co-art teacher had taken several 'room service' bead requests at one of our partner hospitals and I was making some room deliveries. My co-art teacher told me that I would really like the energy of the woman in room XYZ. When I opened the door, this wonderful woman was sitting in a chair next to her bed. Her name is “Tess” and she greeted me with a warm, crooked smile.

Tess shared with me that none of her family lived nearby the hospital and she was not very happy to be there as you can imagine. She had previously found out that she had cancer, but was treated and was in remission. More recently, Tess started feeling terrible and grumpy again. Her fears were made into reality when the doctors told her that her cancer was back, and this time she needed a bone marrow transplant. While Tess was sharing her story with me, she was altering her house slippers. She said everything [in her life] was just uncomfortable right now; her house slippers, her pants were too tight, just everything.

Tess and I spent some time conversing and then I showed her the colorful plate of beads that I had to offer and her eyes lit up. She was happy to have a distraction. I told her that we would be back to check on her and that she could call for us anytime she needed more supplies. She looked up at me and thanked me. As I walked toward the door, she sweetly said, “I am hopeful that this hospital will get the cancer out”. I looked at her and said, “me too”.

A moment in the life of a CHAP art teacher

By Chap Staff Wendi - Art Club and Hospital Teacher
I was in the Playroom when we all heard a child yelling very loudly from her room. She sounded like she was in agony. This child was yelling and crying so loud that everyone on the floor probably heard. All of us CHAP teachers wondered if the child was okay.
Her mom was in the Art Room and said, "It's my daughter and she's mad because she wants her IV out. She also has Autism". The mom looked exhausted as she smiled.
“Can I try to go in there and talk with her?” I asked.
Her mom was very appreciative and told me to go for it, but also gave me the look that seemed to say, 'Good Luck'.
I went into the little girl's room and she was still just screaming her little head off! I said hello and that I was from CHAP and that I had some clay for her. She was screaming so hard her eyes were closed! She also had two black eyes and a large laceration across her nose. She was still screaming. I then repeated myself and told her that her mom told me she was an artist. I told her that I was an artist too. The screaming grew quieter and quieter and finally she stopped. I told her that she could come to the CHAP studio and do some painting with me sometime. She squinted her eyes at me and asked in such a sweet voice, "What's your favorite color"?
I told her my favorite color was green. She shared that hers was red. I sat down on the floor with her squishing some red clay. We talked about her favorite things to make and what she would draw and paint when she comes to the CHAP studio. She said that she would draw a green-eyed tree frog! For those 15 minutes or so that I spent with her, she was able to relax. She could finally take her mind off of her IV and her time in her tiny hospital room, even if for a short time.
This is just one little story of what it is like to work as an Art Teacher at the hospital. It is not an easy job, but it is a wonderful job. I believe it is magical to bring the Healing Power of Art to Children and their families.
‹ 1 ... 6 7 8 9 10 11 12 13 14 ›
WARNING: Javascript is currently disabled or is not available in your browser. GlobalGiving makes extensive use of Javascript and will not function properly with Javascript disabled. Please enable Javascript and refresh this page.