Spider monkeys free in the forest 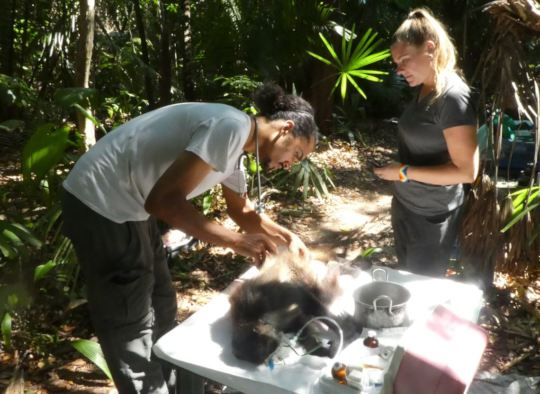 There was always the question as to how the five spider monkeys would react when the door to freedom was opened - would they run out and disappear in separate directions into the surrounding tropical forest, or would they stay as a group near the enclosure and start exploring their surroundings? The release process in many countries is to carry the spider monkeys in kennels to the release site, then open the kennel doors, often with the monkeys shooting off in different directions, becoming lost and fragmenting the group. Our pre-release process was designed to address this issue, with three months in the release enclosure at the release site, to ensure the Wildtracks monkeys were accustomed to the sites and sounds of the forest they were being released into, to give them a better chance of success.

As we watched, they cautiously emerged from the open trap door, and started exploring the nearest trees, returning to the enclosure for fruit and water, and generally staying together. Charlie, Penny and Mattie enjoyed the fruit of the nearby negrito trees, while Duma and Mel stayed closer to the enclosure, with Duma reluctant to leave the safety of the enclosure roof. Mel started to explore further, returning to the enclosure and Duma at times. The others increased the range of their exploration - on the third day, Penny was tracked down to the middle of a swamp area more than 600m away, high up in an emergent tree, eating flowers buds, before returning to the release site and the rest of the group later that day.

Not all spider monkeys are ready for the wild. After six days, it was obvious that Duma was not adapting well...she was tracked to a kilometer from the release enclosure, and found on her own...and on the ground. She was encouraged to follow the trackers back to the enclosure, was kenneled, and brought back to Wildtracks. The others, however, pay less and less attention to the trackers, more intent on exploring their environment.

The tracking team are now focused on the remaining four monkeys - on checking how Charlie, Penny, Mattie and Mel are doing, and where they have been roaming since their release. With many thousands of acres of forest, keeping up with them is proving challenging, but post release tracking still continues. The team range through the forest using the receiver to pick up pings from the transmitters, indicating their location. At times there are no signs, then a signal will be picked up, showing the trackers that they are on the right trail. However, the spider monkeys are not making it easy, as they are can travel silently through the canopy and are now moving away from people - excellent behaviour, but also making it harder to pick up their signals.

We are now four months into the post release monitoring. We have passed the $8,000 mark in our appeal, and would like to express our gratitude to all those amazing supporters who have been with us on this project - particularly our recurring donors. You have been instrumental in ensuring that we have the support, backup and operational funding for maintaining our tracking team in the field. Since the release, the team has encountered not only the spider monkeys, but also come face to face with a jaguar, avoided a large herd of white-lipped peccary (the Belize equivalent of wild pigs), watched an ornate hawk eagle soar over the canopy and listened to the howls of well established groups of reintroduced Yucatan howler monkeys, announcing their locations to stake their territories.

As we continue the post-release monitoring, we are entering a somewhat delayed wet season, which will bring changes to the forest and potentially to the areas the spider monkeys use. Thank you for joining us on this adventure! 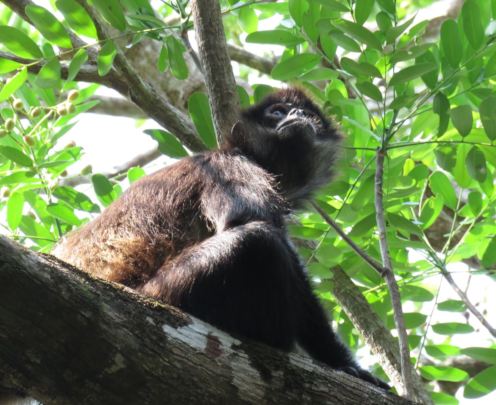 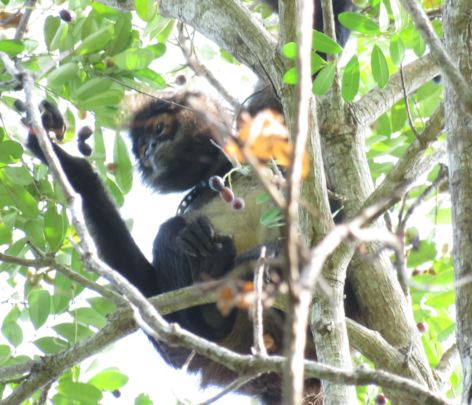 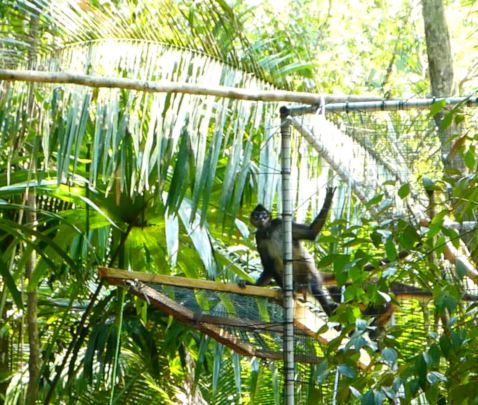 THE FIRST GROUP OF WILDTRACKS SPIDER  MONKEYS ARE  NOW IN THE WILD!

Join us as we watch the moment when they leave the enclosure for the first time...a very emotional moment for all concerned....and one that you have been part of making possible...

First reports show that they are staying relatively close to the release enclosure, and returning for food and water - though they are also enjoying the negrito fruit of the nearby trees.

Now the tracking team has the task of ensuring their first week goes smoothly, finding and following them each day, and identifying any potential issues.

Reaching this point is a huge achievement, and one that has only been possible because of the support of all of you - the Belize Forest Department, the Fireburn Community, those who have cared for these five spider monkeys during their rehabilitation, those who have donated towards the release appeal, Wild &Free, Gregg and Jill Stone, who supported the purchase of the trackers, Wildtracks USA, which has been a constant, supportive partner, Twycross Zoo staff (Mat and Lainy) and the vets of Animal Medical Centre and Belize Wildlife and Referral Clinic, who donated their time for the pre-release health checks, and Dr. Philip of AMC who returned to assist with the collaring and final checks before release.

...and, of course, those in the field, now busy ensuring these five have the best start possible in the wild....

We look forward to keeping you informed through the post-release stage...we still have at least six months of post release tracking to ensure Charlie and his females settle into life in the wild...and are still $2,650 short of our target...please consider contribuing your support of this exciting project! 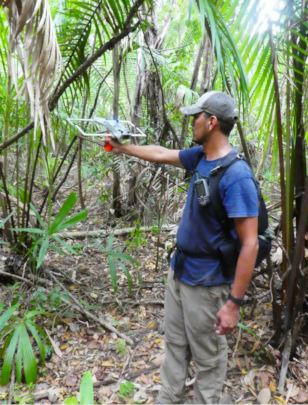 Life at the Pre-Release Site 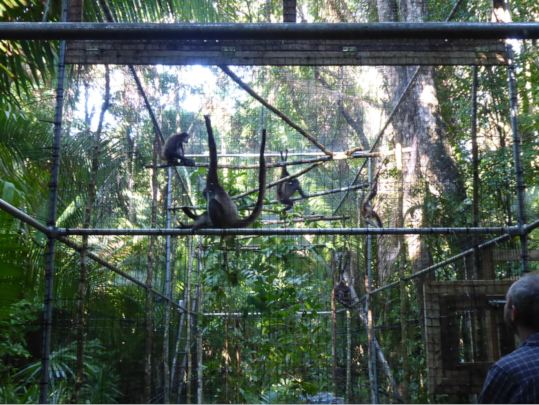 The Wildtracks Tracking Team headed down to Fireburn - complete with camping equipment, construction equipment and food for two weeks - to construct the pre-release enclosure for Charlie's spider monkey group. All equipment and supplies had to be carried over the lagoon by boat, and then the 7 km to the release site by tractor, with help from the Fireburn community. With no roads into the area, and deep tractor ruts on the single track, moving the kit into the site was a challenge, not helped when the tractor got stuck several times on the way. When night fell, the Team were still working hard to arrive at the site.

The camp is set up...the Tracking Team are going to be here in rotation for up to a year to ensure the spider monkey release is a success...they have set up their kitchen and dining area. Fried jacks, as always, are on the menu! The shower water comes from an old Maya well - the whole Fireburn area has many reminders of the Maya civilization that once thrived here.

The Team's task is to get the enclosure up in time for the spider monkeys arrival on the 18th January. The release enclosure will hold the spider monkeys for the next ten weeks, to ensure they are familiar with the sights and sounds of the immediate release area and are used to being fed here.The door will then be opened and the post-release tracking will start..

Wildtracks has been very fortunate to have the support of Twycross Zoo, in the UK, for the upcoming release of the first group of Wildtracks spider monkeys. This includes the assistance of two primate specialists - the Twycross head vet, Dr. Mátyás Liptovszky and primate specialist carer Lainy Miller. They arrived on the 16th, and spent the whole day on the 17th conducting the health assessments on the five spider monkeys being released - Charlie, Duma, Penny, Mattie and Mel. We have also been very fortunate to have the support of in-country vets - Dr. Isabelle Paquet-Durand of the Belize Wildlife and Referral Clinic for the darting of the spider monkeys for the health checks, and Drs. Jane Crawford and Philip De Shield of Belize's Animal Medical Centre, assisting with the assessments and running the blood tests. - it has been great working with such fantastic, dedicated people!

The monkeys all had external examinations and a series of blood tests / TB tests to ensure that they are 100% healthy, fit and ready for their next great adventure. The results are good! All monkeys are cleared for release!

The monkeys are loaded into the vehicle for their transfer to Fireburn. Like the equipment, they have to cross the lagoon aand be carried through the jungle to the release site. With help from the Tracking Team and the Fireburn Community, they finally reach the release site and are released into their new enclosure.

The sun breaks through the clouds….and there they are – five spider monkeys jostling for space in the early morning sunbeams in the release enclosure in the heart of the forest of the North East Biological Corridor. Charlie, Duma, Mattie, Mel and Penny have been amazingly calm during the whole health checks and transfer process, taking it in their stride. Now they are starting their next phase – 10 weeks in the pre-release enclosure to ensure they are familiar with the sights, sounds and smells of their future home, before the doors are opened and the post-release tracking begins…

For Wildtracks, rehabilitation isn't just about improving the health of an animal towards release...it is about ensuring that the release is successful - that the animals have the skills that they need to survive in the wild, thrive and contribute towards strenghtening species populations in Belize, restoring key seed dispersers to improve climate change resilience - and bringing natural balance back to an area from which they have disappeared.

A huge thank you to the fantastic Wildtracks Team for all their hard work in preparing for this transfer, to the Fireburn Community for their assistance, and to Lainy Miller, Mátyás Liptovszky and Twycross Zoo for their support of the health assessments. Thank you to Alysha McGratan, our Primate Rrehab Manager, and all those other members of the Wildtracks Team who have been involved in the rehab care of these spider monkey characters over the years.

A huge shout out to the Wildtracks Team out there at the release site - you guys a seriously awesome!!

Ten weeks in the pre-release enclosure...and then freedom....!

For the illustrated version...

News Brief from the Fireburn Jungle

We look forward to updating you in the next report! 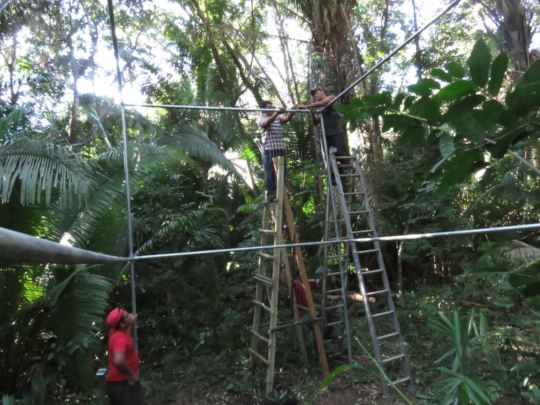 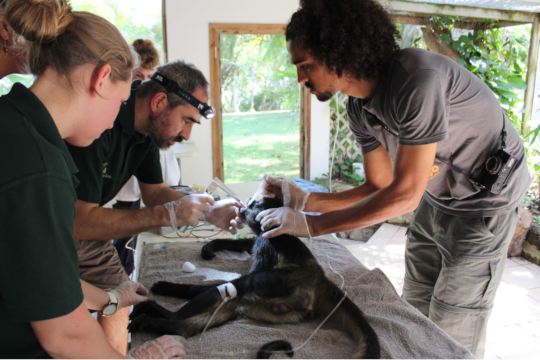 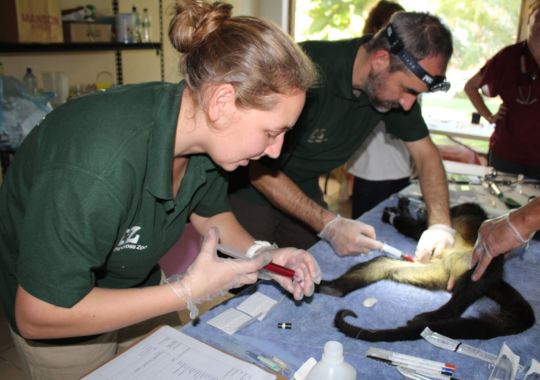 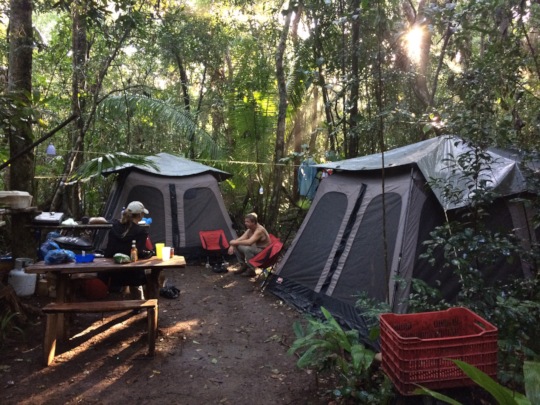 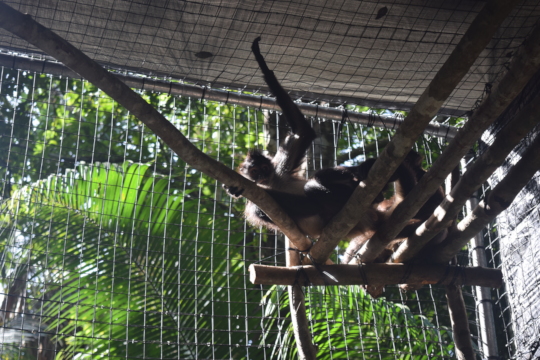 Enjoying early morning sunshine
‹ 1 2 3 ›
WARNING: Javascript is currently disabled or is not available in your browser. GlobalGiving makes extensive use of Javascript and will not function properly with Javascript disabled. Please enable Javascript and refresh this page.