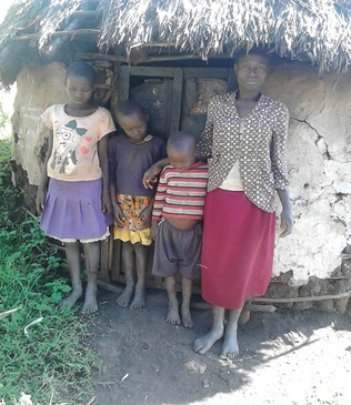 #1--Family of the victims attacked on Mt. Elgon.

Picture # 1: Family of the victims attacked on Mt. Elgon. Note the lack of shoes even on the mother and the very basic structure of their small home. In other words this is a poor family as were most of the victims.

Update on the situation on Mt. Elgon: After the gang on Mt. Elgon killed 30 people, raped 42 women and girls, and destroyed substantial property, a reward of one million shillings (US$10,000) was put on the head of the leader of the gang, Timothy Kiptanui Kitai. For details on this please see me previous posting on March 16, http://davidzarembka.com/2018/03/15/491-attacks-on-women-on-mt-elgon-march-16-2018/. Fortunately last Monday, he turned himself in at a police station near Eldoret. His brother who also part of the gang also surrendered to the police. Even though some of the members of the gang are still at large, this should be the end of the gang and its killings, rapes, and destruction on Mt. Elgon that lead to fear and people leaving their homes for security in schools. The damage, both material and psychological, is going to take a long time to recover. While some of the community members who had fled are now returning to their homes, a considerable amount of healing, reconciliation and debriefing needs to occur.

Getry told me, that the womb of the eleven year old girl who had been gang raped was so extensively damaged that it had to be removed. As a result, in a culture where women are expected to have children, she will never become a biological mother. As Getry said, “This is an issue she is going to have to deal with the rest of her life.”

Picture #2: A participant with disability who escaped the hands of the gang in TCSC’s basic HROC workshop.

My husband was killed by the armed gang. From what I was told, he was suspected to be a government informer. Two men pulled me from the kitchen. They threatened to throw me in a pit latrine if I screamed. One raped me with protection; another did not use any protection. Notwithstanding my pain, my husband’s family members have excommunicated me with my three children. I can’t afford basic needs. Because of stigma I have had to change the school my kids attended. It’s so hurting because the sole breadwinner was killed. Tell my story to shame and name them. Help me to meet Mavis; I want to tell her “thank you” for supporting this training. Rape survivor participant at HROC basic workshop.

To make a tax deductible (US) or gift aid eligible (UK) donation through GlobalGiving for TCSC to continue its recovery program on Mt. Elgon, go to http://goto.gg/32883

TCSC conducted one three-day Healing and Rebuilding Our Communities basic workshop with three female facilitators for 21 survivors of rape. As Getry reported the workshop was very emotional. Fortunately a trained counselor attended the workshop to individually counsel any woman who needed and wanted help.

Picture # 3: HROC training with Nyumba Kumi [ten households] leaders that introduced one whistle in every household.

A second workshop was held with twenty-three male leaders from six villages. Many of these were nyumba kumi [ten household] leaders. This is a program in Kenya where ten households in a community come together to chose one person to be the leader in these ten households. The government had put a three-month night curfew from 6 pm to 6 am on the community. This caused considerable inconvence since no one could go out at night even into their own farm. If a woman was giving birth at night, she was unable to be taken to the clinic for birth on the motorcycle “ambulance” system that the Mt. Elgon Peace Centre has set up. By the end of the workshop, the leaders vowed to remain vigilant, use the TCSC Call-In Centre to text messages for early warning, and initiate a one whistle per household to be blown in case of any dangerous night activity.

One issue that was pending was if the former Sabaot Land Defense Force (SLDF) which had terrorized the Mt. Elgon community from 2006 to 2008 was regrouping. Since TCSC had done a number of workshops with reformed SLDF members, one of the HROC facilitators visited one of these members who said,

Seven of us [former SLDF members] met to mourn one of our members who was killed in the Saria village in Chepyuk in an attack that left six people dead. If we were still in SLDF we could have revenged, but the training that we got from HROC has help us transform. It’s until all those who were previously involved in SLDF activities are trained in peacemaking will violence on the mountain subside.

In order to restore this wounded community on Mt. Elgon, a tremendous amount of trauma healing, both at the individual and community level, needs to occur. While TCSC has begun work with the women who were raped, this work is only the initial healing that these women and girls need to go through. TCSC and the people on Mt. Elgon would appreciate your support. 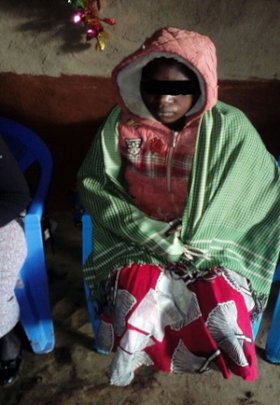 #2--A participant with disability. 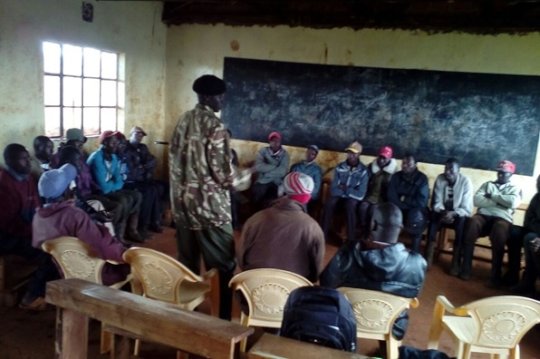 We succeeded in the GlobalGiving's Accelerator Campaign so that we will become a partnering organization with the ability to post Transforming Community for Social Change projects on their fundraising board. There were 62 people who donated a total of $5089. Thanks so much for this team effort. This was quite an accomplishment. There were 577 organizations in the Accelerator Campaign and only 81 or 14% were able to receive at least $5,000 from 40 donors. We therefore did quite well in this challenge.

The basic concept of crowdfunding is that people will approach their family, friends, and others about the peace and reconciliation work we are doing in western Kenyai. We had one person who told me she made a donation and then took the campaign to her Quaker Meeting and got three more people to donate. This is how it works, how we get a "crowd."

By June 10 we are required to send you a report on how we have spent the funds which you donated.

One of the advantages of being a partner with GlobalGiving is that they have special fundraising days for bonueses and matching grants. The next one is coming up next week from Monday through Friday, Apirl 9 to 13. GlobalGiving is half matching the first $100,000 in small donations of up to $50. So if a person donates $50, GlobalGiving will match this with $25 for a total of $75. Since the match will end when the funds are depleated, it is better if people donate as early as possible during the week. Please tell others you know about this matching grant. I have a put a goal of $1000 of donations with $500 of match.

For those of you, who are not on my Reports from Kenya weekly blog about our peace programs in East Africa, current political analysis, and comments on East African culture, can send me an email at davidzarembka@gmail.com and I can add you to the list to receive the reports.

Again thanks for the teamwork.