Working with warriors who are a perceived threat in Samburu requires well thought out interventions. Transforming Community for Social Change's team had a meeting to plan the intervention according to funds raised through GlobalGiving. Due to the nature and dynamics of the warriors, activities are slated to start on the last week of January when TCSC receives the funds from GlobalGiving. These will continue up to April followed by monitoring and evaluation. The following activities are to be done:

All this were to be done with the three neighboring communities which are in conflict: 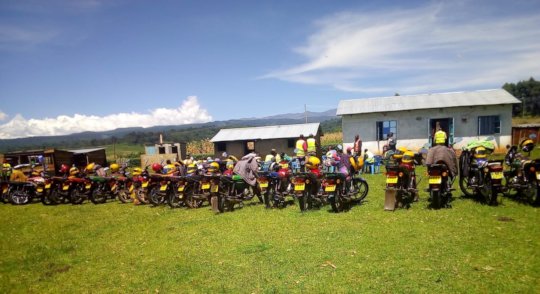 Motorcycles at the dialogue session.

The bodaboda (motorcycle taxis) industry has grown immensely since its inception in 2003. The industry has seen many youth engaged in the business. From the start of the business, the government did not have clear regulations to guide the industry. As a result the riders were associated with all sorts of unruly behavior and accidents. Thirty percent of all accidents recorded are associated with the industry leading to the introduction of a special ward in government hospitals for the motorbike related accidents. [Note from Dave Z: One evening when I was at Lumakanda hospital with one of the sick children, a passanger who was in a motorcycle accident in Kipkarren River was brought in with one leg severed at the knee. The driver was then brought in bleeding profusely.]

To tame this menace of bodaboda chaos, the government introduced stringent laws commonly known as “Michuki laws” named after the minister who developed the laws. The bodaboda drivers were required to have:

These rules have now started being enforced again by the police. This caught the bodaboda drivers unprepared and, since they were many in number, they started engaging in battles with the police.

On Mt. Elgon the riders ganged up and roughed up the policemen in a very tough battle. One of the officers broke his leg and a number of causalities taken to Bungoma hospital.

Transforming community for social change intervened by conducting a dialogue between the operators and the police. A total of one hundred and thirty people attended the meeting at the peace centre.

Resolutions accepted at the meeting included

This is an example of TCSC’s peacemaking work in action.

Note: On December 24 at the Mt. Elgon Peace Center, Transforming Community for Social Change plans a Christmas Party for 600 or more children. We will report on this activity after Christmas. 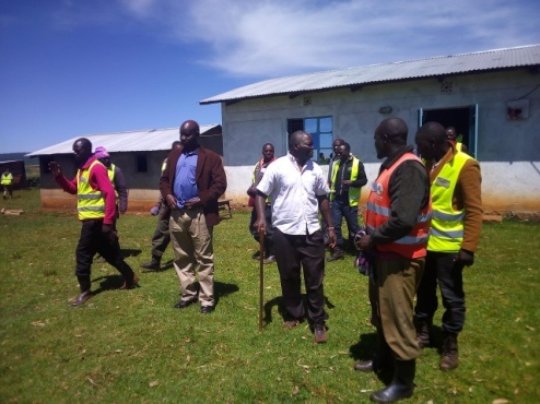 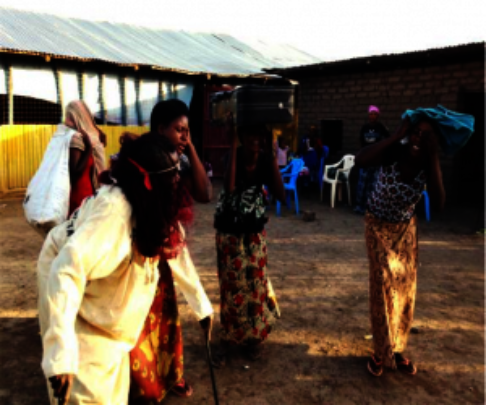 Giving Tuesday is tomorrow and Transforming Community for Social Change hopes that you can make a donation on that day. GlobalGiving will give a 12% to 15% bonus for donations made on Giving Tuesday that are made during that day Eastern Standard Time in the US. Recurring donations will be matched up to $200 after the fourth payment.

For Transforming Community for Social Change (TCSC), click on goto.gg/31755

To support Peacemaking with Samburu Warriors, click on goto.gg/35909

To support Christmas Celebration for 600 Kids, click on goto.gg/36828

This year Transforming Community for Social Change (TCSC) and its local partners have been working in Kenya to promote a culture of peace and restoration of justice through advocacy, economic empowerment, and community development. After the last elections in 2017, Kenya teetered on the brink of civil war; enraged citizens were manipulated by their political leaders to exact revenge for a stolen election.

TCSC was instrumental working with our over 1000 grassroots citizen reporters, our program facilitators, and resource persons to coordinate Civic Education and open Peace Forums for inter-ethnic groups in Western Kenya and Mt Elgon. This offered an integrated and focused election violence prevention project that built on the foundations we had laid in the communities that were considered flash points. With our track record and strong links to mobilized grassroot groups, those involved in peace initiatives and TSCS-trained Resource People were ideally located to promote a collective understanding of and investment in a free and fair election process that crossed ethnic, religious, and party lines.

Before the 2017 election TCSC conducted refresher trainings with our local Resource People so that they could be community trainers in the electoral process, citizen reporting, and election observation. TCSC also developed watch-dog groups to monitor political developments, report on hate speech, and hold political aspirants and community leaders accountable. In order to build the foundation of community relationships and basic knowledge needed for these watch-dog groups, TCSC managed to hold inter-ethnic, inter-faith and inter-party community forums, civic education workshops, and voter sensitization sessions and as well as monitorthe election process itself.

Since December 2013 when tribal violence between the Dinka and Nuer in South Sudan broke out, tens of thousands of South Sudanese have swelled the numbers in the Kakuma Refugee Camp. Moreover they have brought the South Sudanese conflict into the camp and the Dinka and Nuer have had deadly clashes in the refugee camp itself. Transforming Community for Social Change with support from donations given through GlobalGiving conducted Healing and Rebuilding Our Communities workshops in Kakuma Refugee Camp. The purposes were

We have a goal of raising $5,000 on Giving Tuesday to continue our peacemaking activities during 2019. We have attached a flier for you to foward to those whom you think might be interested in the work of Transforming Community for Social Change's peacemaking work.

We appreciate you help.

Attachments:
‹ 1 2 3 4 5 6 7 8 9 10 ›
WARNING: Javascript is currently disabled or is not available in your browser. GlobalGiving makes extensive use of Javascript and will not function properly with Javascript disabled. Please enable Javascript and refresh this page.