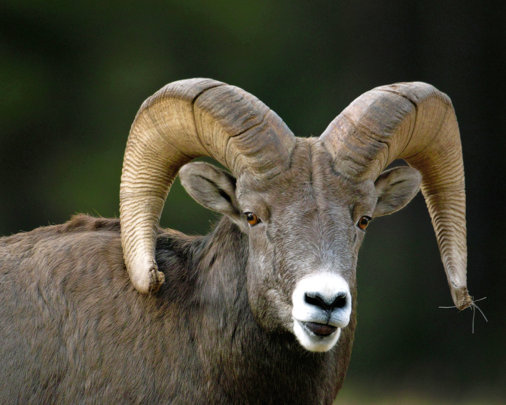 The National Wildlife Federation, in close partnership with the Wyoming Wild Sheep Foundation and the Wyoming Wildlife Federation, is celebrating another exciting victory for wildlife in the Greater Yellowstone Ecosystem.  In early November, 36,000 acres of domestic sheep grazing were permanently retired in the upper Green River region southeast of Yellowstone / Grand Teton National Park in the Bridger-Teton National Forest.

For well over a decade these (4) allotments were ground zero for grizzly bear and wolf conflicts south of Yellowstone. In fact, 68% of all grizzly bear conflicts in the Yellowstone Ecosystem over the last ten years occured on these domestic sheep grazing allotments.  As a result of these conflicts, dozens of bears and wolves have been removed ,relocated and / or killed, significantly hindering their recovery. While NWF has worked with other ranchers to retire similar problem allotments over the past 15 years, this retirement is an important benchmark for species protection.

Not only does this win benefit wolves and bears, but bighorn sheep also come out big winners.  The risk of contact between domestic and bighorn sheep has been significant on the allotments.  This contact is especially troublesome as bighorn sheep face a high risk of becoming infected with pneumonia carried by their domestic counterparts.  The disease, when transmitted to wild sheep, often results in all-age die offs and can decimate entire herds of bighorns.  By eliminating this risk, bighorns will once again thrive.

The most important part of this work is all the agreements we negotiate with ranchers are completely voluntary. The agreements are designed to benefit both native wildlife and provide the rancher financial opportunity to acquire grazing elsewhere where there is minimal conflict with wildlife.  This free-market approach protects the strong western tradition of ranching while at the same time shifting grazing patterns to benefit wildlife for future generations.

The support of our donors and partners has been invaluable in creating these long-term win-win solutions for wildlife! 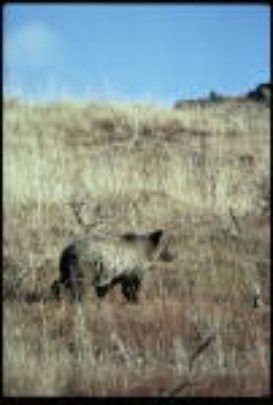 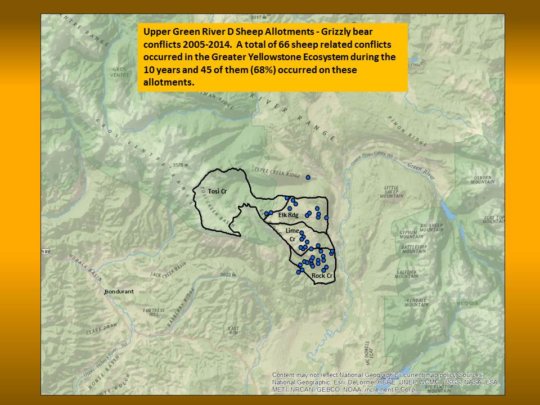 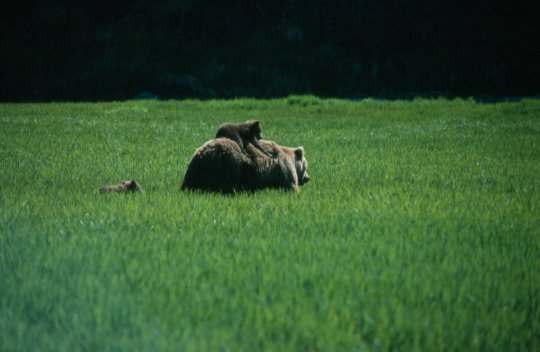 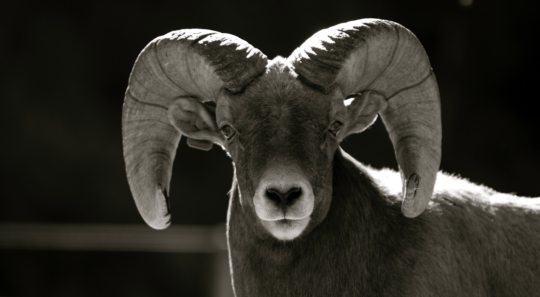 Bighorn and domestic sheep do not mix.

We are thrilled to report that last week, after three years of negotiation and collaboration with a Wyoming sheep producer, the National Wildlife Federation completed a grazing retirement to reduce wildlife / livestock conflict on 67,000 of public lands in the Wyoming Range south of Jackson, WY.  This grazing retirement protects critical high-elevation habitat for mule deer, bighorn sheep and a host of other native wildlife.  By compensating the rancher to waive his permit, he is able to purchase alternate grazing that minimizes wildlife / livestock conflict.  It's a win for wildlife and a win for a rancher who can now continue raising domestic sheep without harming wildlife.

After a century of continuous domestic sheep grazing, many areas of the Wyoming Range have degraded wildlife habitat and additionally pose a significant threat to bighorn sheep herds who are especially susceptible to disease transmission from their domestic counterparts.  In many situations, these disease outbreaks (a form of pneumonia) causes entire herds to die off.  For a species that once inhabitat nearly every mountain range in the intermountain west, bighorn sheep have suffered tremendous declines over the past centuryand current populations remain only a fraction of their historic abundance.

We are making tremendous progress and are shifting grazing patterns in the West to accomodate wildlife and secure a future for domestic livestock production.  To date, NWF has retired over 1.1 million acres in the West to benefit wildlife, including bighorn sheep, grizzly bears, wolves, and native fisheries.

We have several exciting opportunities on the horizon, including a critical 85,000 acre allotment in central Idaho where domestic sheep pose a significant risk to endangered Chinook salmon.  Many thanks to our supporters for making this tremendous progress capable! 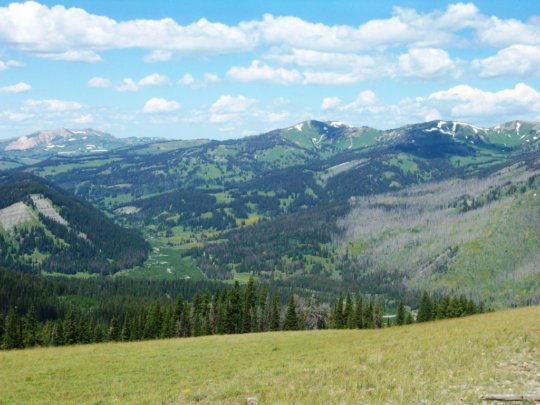 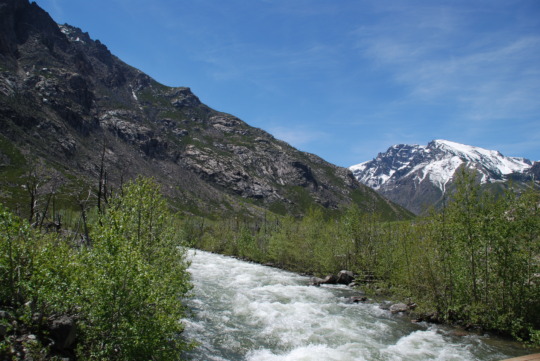 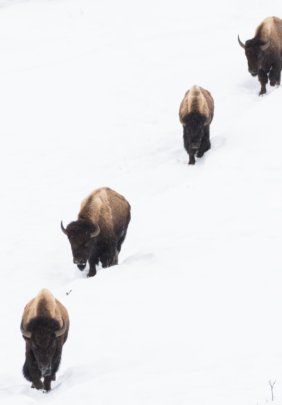 In a huge victory for wildlife, Montana Gov. Steve Bullock last month granted wild bison more room to roam around Yellowstone National Park. It’s the first time in 30 years that bison can migrate safely – and without harassment – outside the park!

Join us in thanking Gov. Bullock for expanding habitat for wild bison and helping public lands be the home to wildlife they were mean to be.

You may ask, Why now? Gov. Bullock pointed to reduced livestock/wildlife conflicts as the main reason for issuing his decision. That means NWF's Wildlife Conflict Resolution Program is working!  NWF has worked tirelessly with cattle ranchers, the Park Service and the Forest Service to allow for year round tolerance of bison as they migrate out of the Park during the winter months searching for forage.  By retiring key grazing allotments north and west of Yellowstone (Horse Butte, Slip n Slide, Royal Teton Ranch) concerns of disease being spread from bison to cattle has all but been eliminated.

-On the west side of the park, there are no active cattle allotments on the public lands which constitute over 96% of the area to be accessed by bison.

Of course, this isn’t the end of our work restoring wild bison.

With help from generous people like you, we’ve eliminated conflict on over a million acres of public land, through voluntary negotiations, retiring grazing leases often provides long-term security to both western ranchers dependent on public lands to make a living and the wildlife who depend on those lands to survive. In the coming years, we hope to double the number, giving wildlife like bison and bighorn sheep safe spaces to roam their natural habitats. 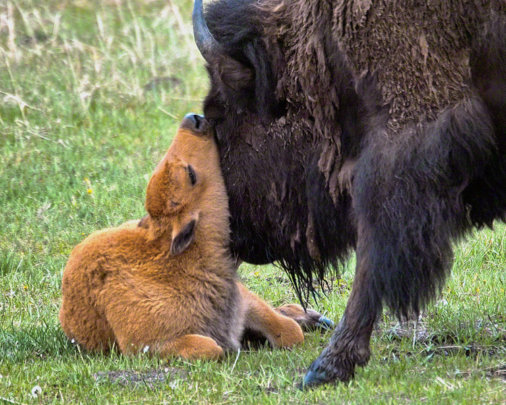 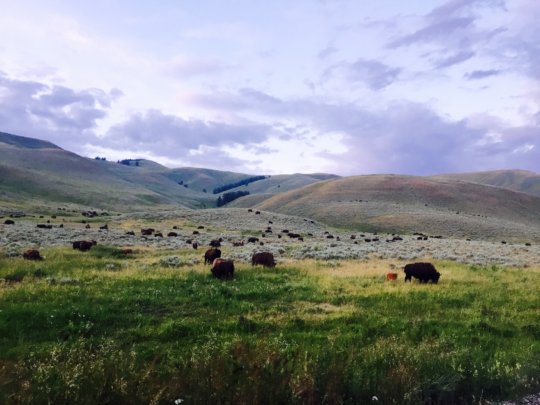 Bison in the Lamar Valley