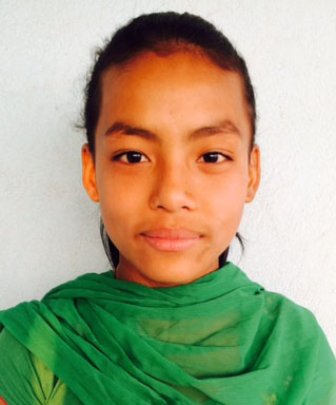 Perhaps there is no better place to celebrate World Day Against Child Labor than at Hamro Ghar. June 12th is celebrated like a holiday among the rescued child laborers who have lived through the emotional and physical trauma that statistics cannot capture. Thanks to supporters like you, they also know the excitement of returning to school and pursuing a future full of hope and promise.

To commemorate this important day this year, the children at Hamro Ghar performed dramas, advocated with policy makers, and participated in a “walkathon” to raise awareness of child labor and push for improved strategies to keep children in school rather than working on carpet looms and brick kilns. In fact, two GoodWeave-supported children joined a delegation that met with Prime Minister K.P. Sharma Oli to share their experience and encourage greater government commitment to ending child labor.

Next year, GoodWeave hopes to celebrate World Day Against Child Labor by completing its fundraising campaign to rebuild and expand  Hamro Ghar that will be able to serve vastly more child laborers as they reclaim their childhoods and their rights. The groundbreaking would take place shortly thereafter. We are working hard to raise the funds to reach our goal, but in the meantime, we thought you might be interested in meeting Sarina, a recent arrival at Hamro Ghar. Now 12 years old, Sarina was forced to quit school after third grade and work in a carpet factory to pay off her parents’ debt. At the carpet factory her days were filled with taunts, beatings and work – 16 hours of work every day. She was found weaving carpets by a GoodWeave inspector and brought to Hamro Ghar where counseling and psychological care are helping her move past her abuse. GoodWeave staff share, “Sarina had a very hard time at the factory … Now, she likes to play and dance. She aims to be a dance teacher in the future.” With new-found stability, support and education, Sarina has a bright future ahead of her.

A year's worth of gratitude. 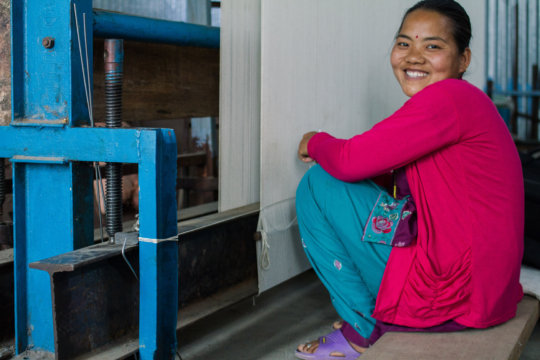 A weaver at a rebuilt GoodWeave carpet factory.

April 25 was the one year anniversary of the first of Nepal's devastating earthquakes. Over the last few weeks I spent time reflecting upon the challenges of the past year and the incredible outpouring of generosity GoodWeave has experienced.

I remembered how the GoodWeave community responded quickly in those first few days after the earthquake, donating thousands of dollars to enable our team to reach 275 participating factories with emergency assistance like medical aid, food, mattresses and tents for more than 5,000 carpet workers and their families.

I remembered how for months after, generous donors like you continued to help in a variety of ways- from carpet companies that donated a portion of their sales to schools that held fundraisers. You sought to support vulnerable weaving families and former child laborers wherever the need was greatest by contributing to our Nepal Earthquake Relief Fund. As time went on and we shared our plans to help weaving families who had lost their village homes return to stability, you donated to ensure that these weavers could go back to work debt-free and with a strong foundation to protect their children from trafficking.

On behalf of the whole GoodWeave team, thank you. This past year has been extremely difficult, but not without hope. While we narrowed the focus of this fundraising page in recent months, your donations to GlobalGiving early on provided a range of support to weaving communities.  Many of you helped us to provide not just immediate relief but also long-term rebuilding support to GoodWeave factories, so that weavers could once again earn incomes and the rug industry could begin to recover. I recently revisited one of the factories that was completely destroyed by the quakes, and you can view our new video here to see how your donation made a difference.

As you know, the months-long border blockade posed major challenges to this project, which now focuses on supporting the rebuilding of homes for 40 weaving families in Sindhupalchowk. Now that the blockade has been lifted, our team is working to complete technical plans for new earthquake-resistant homes. The process is complicated, and a lack of manpower and transportation makes the work even more difficult. However, members of our staff are now visiting each village, and they report that GoodWeave is the only organization providing support to earthquake victims in these communities. We are motivated by the urgency of their situation and will begin construction as soon as the government approves our rebuilding plans.

With the help of a generous grant from GlobalGiving, this project has been fully funded -- but your support is still needed. Please check out our other projects on GlobalGiving to see how you can help GoodWeave to rescue and educate former child laborers and ensure that they have a safe place to stay for years to come.

Although this page is closing, GoodWeave will continue to invest in efforts to stabilize families and the industry -- from paying school fees for vulnerable children to training women in the craft to advocating that Nepal's government do more to stop child labor in its primary export sector.  We thank you again for your commitment to supporting GoodWeave’s work and hope you will continue to stay in touch via Facebook, Twitter, or by signing up for our newsletter. 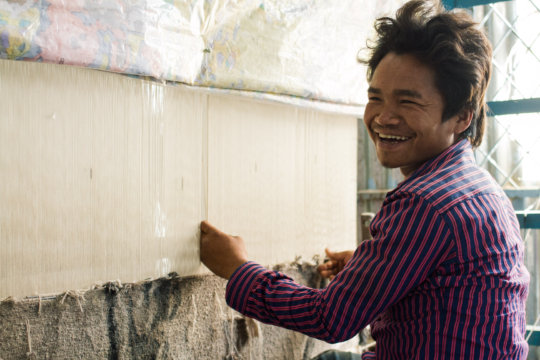 A weaver who has returned to work. 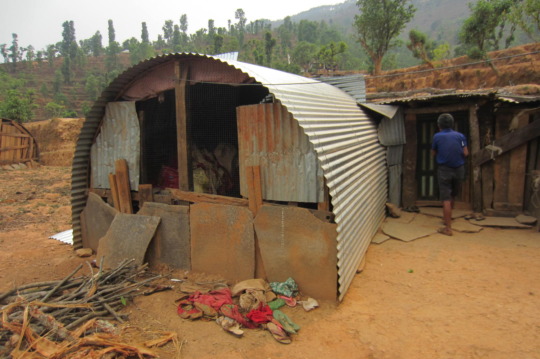 This home will be rebuilt with your support. 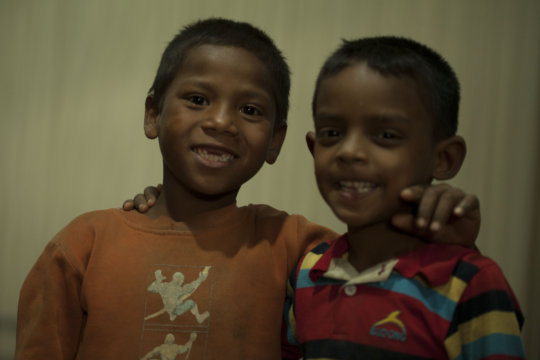 Children of weavers play after school. 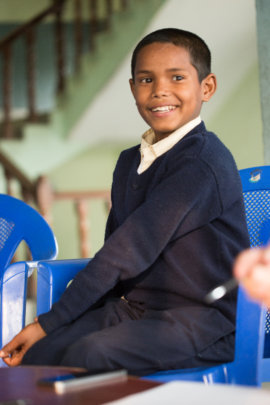 Binod shared his story of life before Hamro Ghar.

Back in March, I traveled to Nepal to meet with our team and spent a day at Hamro Ghar. After a formal greeting by two grinning students, I visited one of the classrooms where former child laborers were seated in rows of desks, focused on their morning English lesson. Before they were rescued by GoodWeave inspectors, these children could only dream of life outside of the factory, and now many are holding a pencil for the first time ever. Their excitement and desire to learn was deeply inspiring, and I wish you could have been there with me to see the impact of your generosity.

As the students returned to their lessons, the Hamro Ghar staff introduced me to a young boy named Binod and explained that he had arrived just three months before. We sat together and Binod began to share his story with a social worker’s help.

Binod was born in rural Southern Nepal into a caste that is deemed “untouchable” in his community. By the time he was seven, both his father and mother had died tragically, and Binod was under the care of his neglectful step-grandparents. He was often left alone.

One day, as Binod and his friends were walking to school, a labor broker approached them. He promised them a good education, food and money if they went with him to Kathmandu – promises that never came true. For two years, Binod worked tirelessly – first in a garage and then a carpet factory, where he wove 16 hours a day with little pay and frequent beatings.

While the beginning of Binod’s story was hard to hear, I could tell by the way he smiled that the ending would be a hopeful one. This past December, GoodWeave inspectors rescued Binod. At Hamro Ghar, he receives intensive counseling and is slowly adjusting to his newfound freedom.  He is now an energetic, talkative 12 year old, and has developed a love for badminton.  And with your support, Binod has finally returned to the classroom.

I have heard so many stories like Binod’s over the years, and I want you to know that it’s only with your help that GoodWeave can create endings like this one. Thank you for supporting these children and for enabling GoodWeave to find the many more still waiting on the looms.

P.S. There is one more exciting update I’d like to share. You may remember that the Hamro Ghar building which GoodWeave rents was somewhat damaged in last spring’s earthquakes, but engineers deemed it safe for now. In order to ensure that children like Binod have a secure home for years to come, we are asking for your support to help us build a new, safer Hamro Ghar to protect these children from future earthquakes and ensure the long-term sustainability of GoodWeave’s work. If you’d like to support this project, please check out our new project page: https://www.globalgiving.org/projects/hamro-ghar/. From now until the end of June, your donation will be matched at 100%! 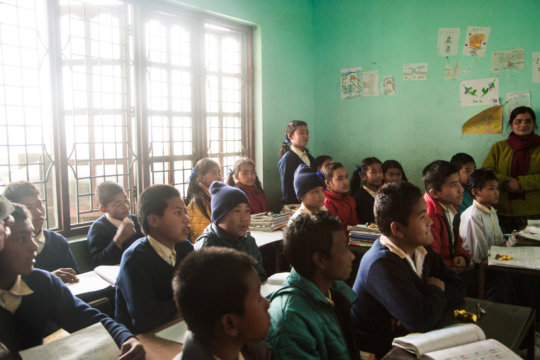 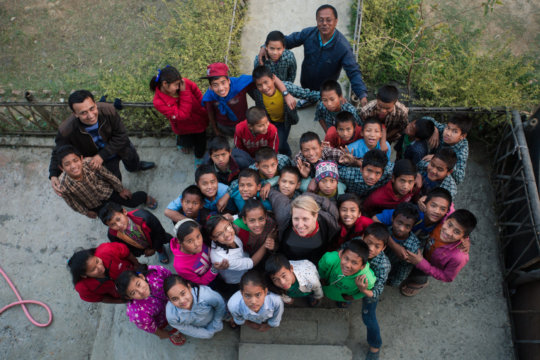 The current residents of Hamro Ghar.

‹ 1 ... 4 5 6 7 8 9 10 11 ... 23 ›
WARNING: Javascript is currently disabled or is not available in your browser. GlobalGiving makes extensive use of Javascript and will not function properly with Javascript disabled. Please enable Javascript and refresh this page.