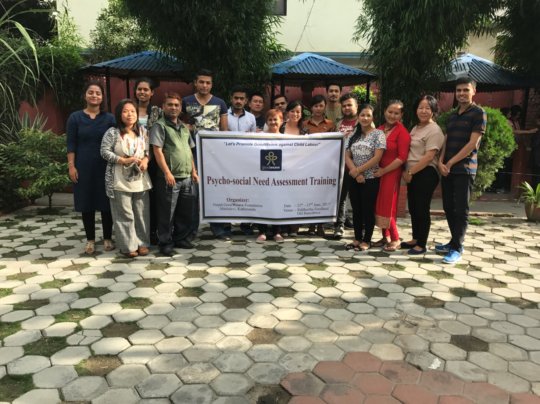 In my last report, I introduced you to Maya, a former child laborer rescued by GoodWeave five years ago. Maya used to work for hours a day in a dark factory, weaving thousands of knots. Now, she spends her time mentoring other children, singing, and learning karate. She is blooming in this new life, and has high hopes and aspirations for the future. But that transition – from working countless hours in a carpet factory to attending school and focusing on a future – is not easy. Children rescued by GoodWeave often struggle with isolation and depression. They have spent months – sometimes years – without the opportunity to grow and play with others. Understandably, sitting in class while trying to manage this transition into a new world can feel entirely overwhelming.

This is where the GoodWeave team comes in. Every day, I am moved by the dedication I see among staff members in Nepal who care so deeply about the children they support. They work constantly to better meet the complex needs of children in transition. Recently, this manifested in a three-day  training in psycho-social needs assessment, designed to further hone the team’s ability to counsel weavers and children affected by the 2015 earthquakes. The training was hosted in conjunction with the Transcultural Pyschosocial Organization of Nepal by a clinical psychologist, a counselor, and a research officer. Fifteen GoodWeave team members participated, learning tools for handling mental health issues and developing a vision for additional program growth moving forward.

When I get to meet children like Maya, I am amazed by their resilience and spirit. She and the other children in GoodWeave’s programs have come so far from their time in the dark of factories and loom-sheds. And GoodWeave staff members have been there to help them every step of the way by counseling, teaching, and listening.

As always, thank you for the support that allows our staff to better serve children like Maya. I am deeply grateful, and I look forward to sharing more updates of progress and hope as the year progresses. 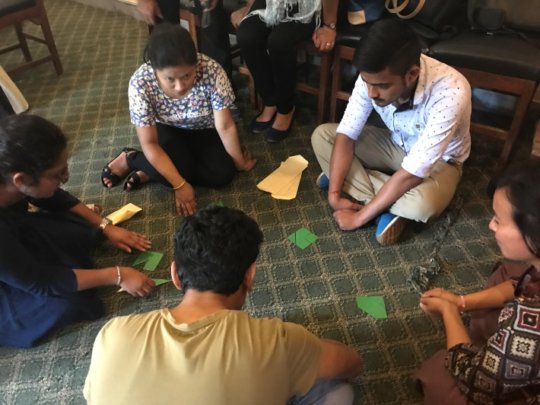 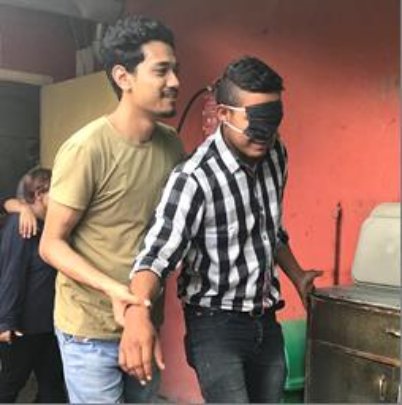 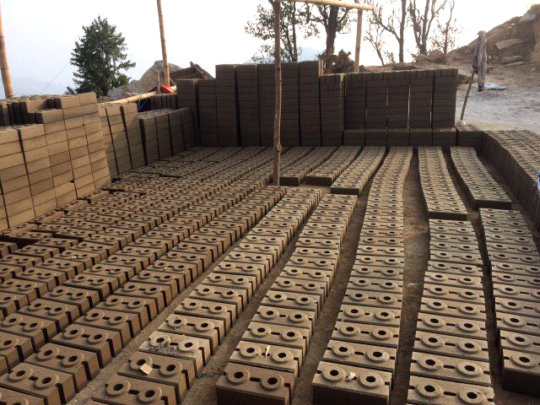 In my last update, I reintroduced you to the recovery process of a country still healing from the damages of a devastating natural disaster. I told you of our plans for rebuilding homes in the Kathmandu Valley, despite the distinct challenges of the last two years. At the time, our partnership with Build up Nepal was at its very beginning: GoodWeave was just learning about the benefits of earth-reinforced bricks, and discovering new ways to reach the 85 weaving families that had been struggling for two years.

In the months since my last update, GoodWeave has worked alongside Build up Nepal to implement the earth-reinforced brick building process across the Sindhupalchowk District. Compressed Stabilized Earth Bricks (CSEB) trainings have been completed in four out of our five targeted villages – Lisankhu, Thulo Dhading, Fulping Kot, and Hagam – and are in progress in the fifth, and final, village of Dubachaur. I was struck by the images of those trainings, which are shared below; they show an engaged and excited community. And, next to each training, the rows and rows of interlocking bricks stand proudly as symbols of hope and resilience.

In Lisankhu and Thulo Dhading, community members have broken ground on the first houses. Trainees in Linsankhu have produced 2,200 bricks – enough to build not only the first model home, but the foundations of several others as well. With the help of the GoodWeave team, the community has also chosen its very first beneficiary: a man named Arjun, one of the poorest members of the weaving communities we support. Thulo Dhading has taken similar steps; trained community members have produced 1,900 bricks, which will provide a roof over the head of Samjhana, a single woman with a small parcel of land and little else.

Other villages are not far behind. With the support of the GoodWeave and Build up Nepal teams, model houses in every targeted village will be constructed by the end of August. Enough bricks to support all 85 weaving families will be produced by the end of September. And, by December of this year, each and every one of those families still recovering from the devastation of the earthquake will have a permanent home.

As always, GoodWeave exists to help children find better lives. Children without the foundation of a steady home are more vulnerable to exploitation, and parents focused on rebuilding efforts cannot earn wages or prioritize sending their sons and daughters to school. With your support, this project has enabled us to give security and safety to 85 families and their children. As we help them build their homes, they can begin building their futures.

Your support for this project and your consistent care for families across the world are what enable GoodWeave to make sustainable change. Thank you, deeply, for your continued support. I look forward to providing further updates as the project progresses. 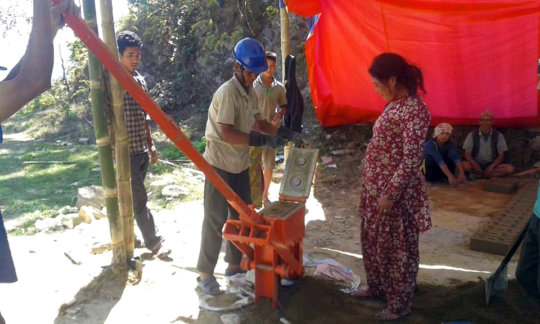 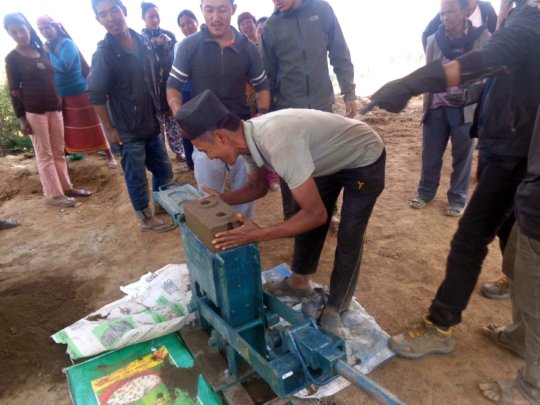 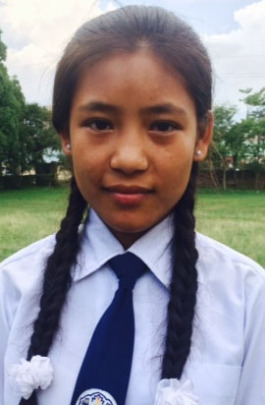 I would like to introduce you to Maya. Maya was rescued by GoodWeave in 2012 from a carpet factory, where she used to tie thousands of knots while weaving carpets. She was brought to Hamro Ghar, GoodWeave’s transit home for children, to receive important services, education and a safe place to live. Unfortunately, we were not able to reunite Maya with her family. Maya spent two years at Hamro Ghar, where she was a very disciplined and hardworking student.

Today, with GoodWeave’s support, Maya has transferred to a prestigious secondary school. She is now a successful and devoted seventh grade student, as well as a talented singer. She also enjoys learning Karate. Those who know her describe her as a kind and caring girl who has become a mentor and an inspiration to other children. She shares both time and advice with them, and offers encouragement and guidance. Maya has a positive outlook on her life now. GoodWeave has been with Maya every step of the way on this journey, and it has been a pleasure to watch her grow into a successful young woman with a bright future.

For over 20 years, GoodWeave has worked to reach children like Maya who toil in the carpet sector. Based on our success and the reduction of child labor in the carpet sector, we are now expanding our work to reach the children laboring in other sectors as well, including the brick kilns of Nepal. GoodWeave envisions a world where no child is forced to work, and where they can reach their full potential through education. Your support makes it possible for GoodWeave to provide children like Maya the care and opportunities that they deserve.

The support that GoodWeave receives from the Global Giving community makes a tangible difference in the lives of so many children. I am grateful for your continued dedication to ending child labor, and your generous assistance in providing the care and education that the children of Hamro Ghar deserve. 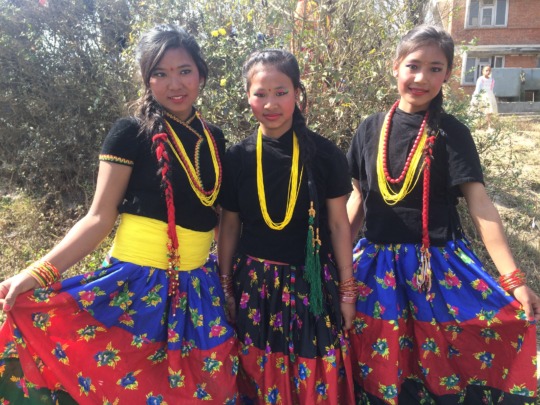 Maya and friends in the traditional dress of Nepal

‹ 1 2 3 4 5 6 7 8 9 ... 22 ›
WARNING: Javascript is currently disabled or is not available in your browser. GlobalGiving makes extensive use of Javascript and will not function properly with Javascript disabled. Please enable Javascript and refresh this page.