My best Christmas present ever 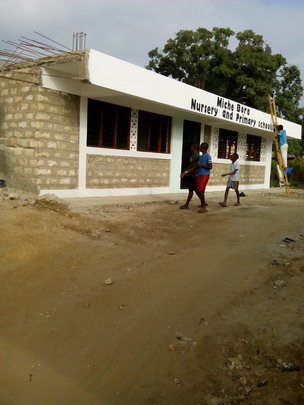 It was Christmas Day and I was happily surrounded by my children and excited grandchildren busily unwrapping the presents brought by Father Christmas during the night.  My husband disappeared for a few minutes and then rushed back in to tell me he'd received an email from the builder in Mombasa.

'I'm having a day off. I don't want to hear anything about the building', I replied, but he persisted. The contractor had taken photographs of our very nearly completed building. The first four classrooms of our own school with three toilets. Tears filled my eyes and I knew that this was the very best Christmas present I would ever receive.

Building anywhere is fraught with problems and Kenya is no exception. On 5th January 2015 a new class of children joined our school and it was so important for this building to be completed as there really was no way we could accommodate them in our already impossibly full rented building, but time was running out. The contractor had promised that it would be completed and it was.

This also means that the furniture which was being made thanks to a UK donor had a home. It is so exciting and so wonderful. This is just the first phase of course but thanks to so many of you it really is happening.

Of course we now need to raise the money for the next phase of the building to ensure the projects sustainability. And of course there are text books to buy for the new class but at least they have a building.

When we went out to Kenya in November it had looked as though this would have a very different ending. A new government law meant that one and a half metres had been stolen from our ground slab for a road and two of the classrooms were going to be too small. Geoff, one of the founding trustees, spent many days sorting this out at the land's office but eventually they agreed that we could build up to our building line and restore the ground slab to its original dimensions.

Adding to the ground slab at a later stage was a huge expense that we could not have anticipated and as a result we have not been able to do a number of things we had planned. There is no glass in the windows and the floor which should have been terrazzo is just the concrete of the foundations. We need to raise funds for these urgently but at least the children could come in.

Next month we are going back to Kenya along with two volunteers and I can't wait. Thank you so much to all of you for your help and support. You are making such a difference to our school which now has 200 children. 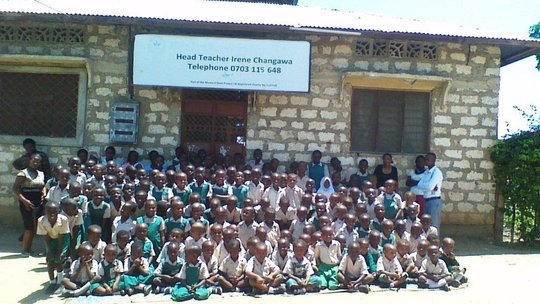 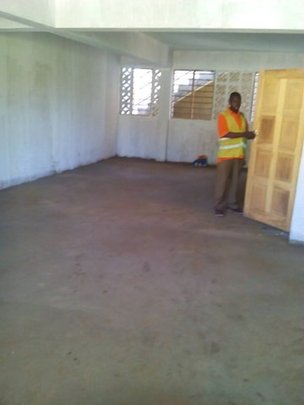 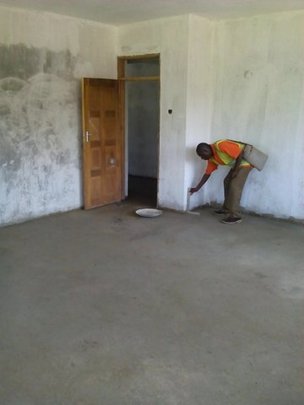 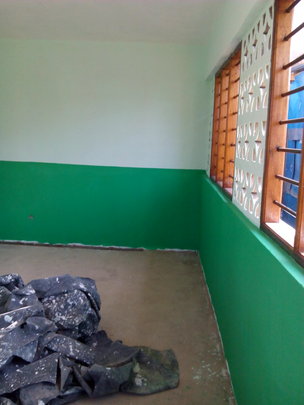 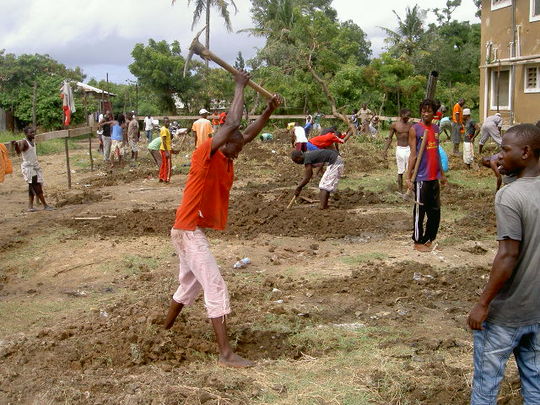 It's finally happening! We've started building our school and we are so excited. In January 2015, the start of the new school year we would have had nowhere for our new class of children. We have now been promised by the contractor that the first phase will be complete by the end of November giving us time to raise the money and to set up the classrooms for the children to move into. Next month, October 2014, we shall be going out to Kenya ourselves and will be able to see it with our own eyes but we have at least had many photographs taken for you to look at. I hope they're not too boring!

As with all building work the ground had to be cleared and levelled. You might expect that the contractor would bring in diggers and he did, but they were in human form. 70 men managed to do all the digging in just two days. Amazing.

As you might expect there have been many visitors to the site. All the local dignitaries calling to inspect the work in progress. I'm not sure they had any greater idea than I with what they were looking at but apparently they sounded official. In true Kenyan fashion they all promised great support for the project and we live in hope.

This first phase consists of the foundations for the whole school and a four classroom block containing three toilets. This section will eventually be a self-contained unit for the younger children but in January we are expecting our older children to be the occupants. Until the funds have been raised for the rest of the ground floor which will include the kitchen the children will need to walk back to our rented building at lunchtime for their mid-day meal. It's only a five minute walk but probably too far for three year olds.

The space that has been released in the rented building will allow us to set up the computer suite again (a grand name for some very old PCs) and more importantly we shall be able to set up a clinic for our children, their siblings and their mothers. Such an exciting time. I can’t wait.

A big thank you to all of you. This school will make such a difference to the community of Mgongeni. 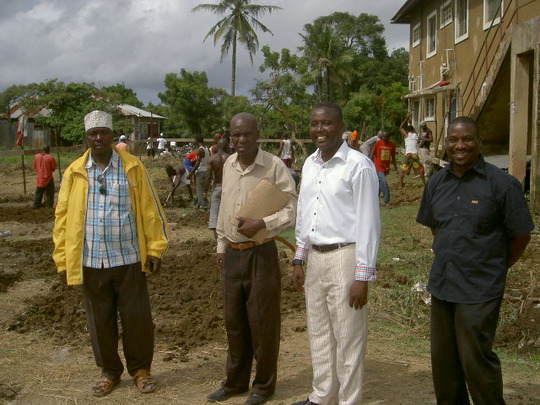 visualisation of completed phase one 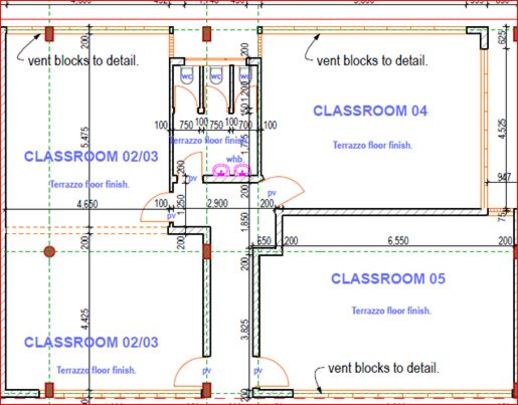 plan of phase one 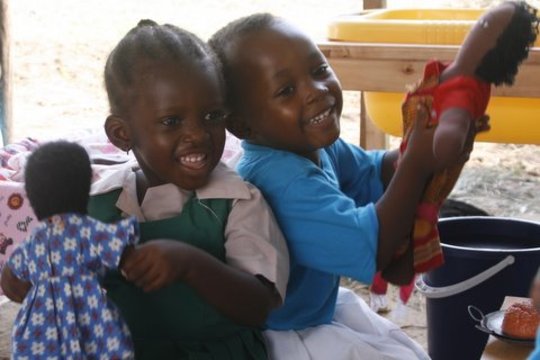 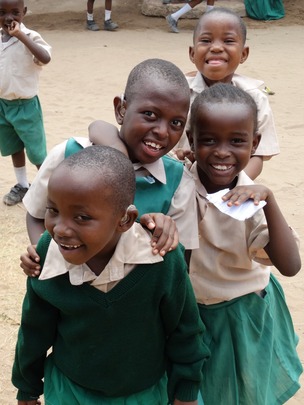 Hope and Samuel signing to each other

Every year we spend March and October in Kenya. Until this year when one of the founding trustees needed urgent medical treatment and the March trip was cancelled. You could feel the panic pouring into the emails from Kenya. They were not coping. It was a difficult time. But then the panic abated, the emails became more confident and our head teacher started telling us the problems and how she resolved them.They have really grown and I feel so proud. It makes you realise that clouds really do have a silver lining.

You will remember Hope our deaf girl. I am told that she is now using sign language herself and is making great progress. Last year for a short time she had a companion, Samuel, who is also profoundly deaf. He was only with us for a couple of weeks and then, when his parents could not see any improvement, they took him away and sent him to a residential school for the deaf. Unfortunately, not only did he not progress there but he became timid and withdrawn. Well now he is back with us and is learning in the same class as Hope. He has a lot of catching up to do but he is making progress and his confidence has grown. We are hoping that this will be good for them both of them as they are the same age. At present though we desperately need to try and get hearing aids for him. The parents clearly cannot afford to buy them and neither can MSP. Samuel's parents would be delighted if anyone felt they could make a contribution towards the £500 needed.

And the building. Ah, I really had hoped to tell you just how far we had progressed. I should know from watching all those programmes on the television that construction is just so fraught with delays but... We really are hoping to start building in August. It's become so urgent as we really do not have anywhere for a new intake in January. But watch this space because the moment we start you will be the first to know.

Many thanks to all of you who have supported us in the past. You have made such a difference.