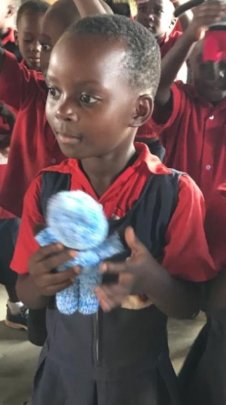 Kathy’s Kindergarten academic year is ending on 30th November 2019 and this period has seen pupils undergo both academic and social transformation since the start of the year . A lot has happened in line with the academic standards of pupils which is our main objective but also the social spheres of children has greatly improved ranging from exposure, sharing, discipline and spiritual life. The daily experience of playing and interacting with their fellows and teachers, together with social and academic tours, has added a valuable additional way of life experience for the pupils.

The school is ending the year with a big event, ever dubbed “Parents Day”, which will also see our pioneer pupils graduate from Nursery level to Primary level. We are all looking forward to a joyous occasion. A lot of presentations, in form of music, dance and drama, have been prepared to showcase the pupils’ skills and academic standard to the parents and community at large. The parents have also decided to get involved and have prepared a dance competition.

One of the pupils graduating this month of November is Margret, aged 5.  A pioneer student at Kathy’s Kindergarten, she is the last born of 6 children and joined the kindergarten 2 years ago. It was the start of new era in her school life of formal education, full of English speaking, social interactions and sharing as the core basis for her daily school life. As a young girl she was used to a home life of being a lonely child since they have not many neighbours.  Her home is close to Kathy’s Centre on the outskirts of Mayuge town, but is surrounded by small fields and next to the main road. This lonely early life of Margret was so boring according to her mother, coupled with her difficulty in speaking so well as a child.

Margret’s life changed so quickly when she joined the school because even her by nature she is an active girl with ability to easily cope up with situations. From a past lonely life at home, to a playful life full of socialization and activeness in class which is a special attribute of Margret. Teachers talk well of Margret, both in class work participation and social life. Her ability to relate, share and lead others in group during playing and role play/games puts her ahead of the rest. Her class performance is so good that even her mother has applauded the teachers for the good grammar and storytelling from Margret while at home. She leads in music, dance and drama and currently she is among the main dancers at the ongoing preparations for the Parents’ Day.

Her love for studying means Margret comes to school early every day. She is always the first to report, with the help of her mother who is also the school cook. While in class early morning, she participates in arranging the chairs and play materials together with the teacher on duty.

We hope to see a great world champion in Margret in both academics and drama acting and we are so proud of such early characters in the lives of our pupils. They give us the basis for developing the best early start for children at Kathy’s Kindergarten.

Bright Minds - Brighter Futures, that is our motto as a school and we feel this is achieved by what is practiced with, for and by our pupils.

Donate TODAY, #GivingTuesday, and help us earn a share of $500,000 in matching funds and bonus prizes from @GlobalGiving! 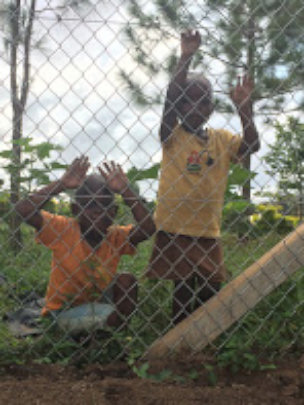 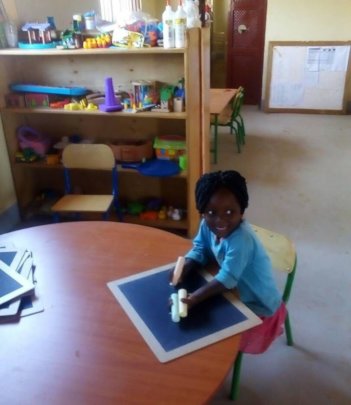 Trying the equipment before Kindergarten opened 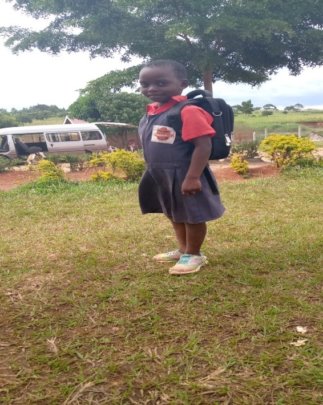 Changing the Lives of Adolescent Mothers 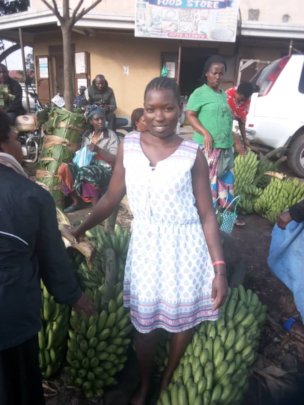 Agnes at her Matoke business in the market

Agnes, a victim of domestic violence resulting from polygamy and alcoholism is one of the young mothers benefiting from the adolescent young mothers Global Giving project in Kasese District, Uganda run by Act4Africa.

Just like other young mothers benefitting from the enterprise and sexual reproductive health program in Kasese district. Agnes narrates her story;

‘My name is Agnes aged 22 years and a single mother from Kasese District. I became pregnant at the age of 17 years after staying home for a long time without going to school. My father, a police constable with 3 wives and 14 children had failed to raise money for my fees claiming that he could not waste money on a girl who will leave the family for a man soon in the future and I had to stop school.

I was forced to get married to the man responsible for my pregnancy and I would not resist because it was against our tradition for me to stay in the same house with my parents when I am pregnant.

In marriage life became extremely hard with my husband who was a boda boda rider at the boarder market of Congo Uganda. He was never home early and several times he returned drunk, yet I was expecting to give birth soon.

My life became extremely hard when my husband married a second wife and left me to suffer in a rented room alone which forced me to work in people’s gardens to get food, yet I was heavily pregnant.

I gave birth at a traditional birth attendant’s home and went back to my place together with my husband who stayed home for only a week and disappeared, so I was left completely helpless with my child which forced me to return back home at my parents’ place’.

One day our local council chairperson mobilized us that there was training for young mothers and it was for free. I joined other girls in our village to get trained by Act4Africa at the sub county. From the trainings, we received knowledge on enterprise and financial literacy and in the end,  we organized ourselves.

With the help of the Act4Africa staff we formed a savings group which started with savings from the funds meant to be for our refreshments and later we started offering labor to peoples gardens in a group and we would save some money and take home some for simple basic needs.

Within the saving group I realized there were many girls who had similar challenges like mine and some even more than what I thought of. This greatly encouraged me to stop the stigma on myself and enabled me to easily relate with the of group girls.

I realized from the trainings that women have equal rights with men regardless of our tradition and the knowledge on business and financial literacy greatly empowered me and was the turning point in my livelihood.

The savings group has been expanded and has grown its capital; we all have small businesses that have improved our lives. Now I sell matoke (plantain) in the main market which has assured me of basic needs to me, my child and also helping my mother at home.

This has given me hope that I can live a single life till I make a decision again to get married at the right time of my choice.’

Agnes like many other beneficiaries of this Global Giving project in Kasese has received knowledge and skills which has been a point of change in their lives. They give big thanks to the Act4Africa and Global Giving donors for this wonderful opportunity which has seen them being economically and socially empowered to become recognized community members both in the family and community at large. 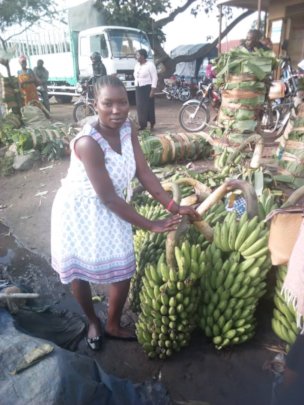 A passion for athletics, learning and helping others! 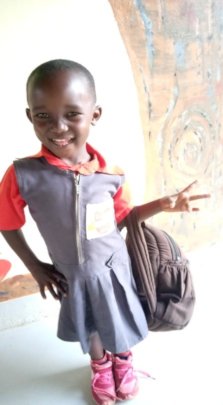 This month we bring to you Hatimah Namutamba one of our pioneer pupils at Kathy’s Kindergarten.

Hatimah joined the Kindergarten in 2018 at the age of 3 years, being her first time in school, she had a lot to learn academically and socially which was to be merged and associated to her daily home life. Thanks to your donations and to our committed teachers we have seen such young girls thrive in their early childhood start.

Hatimah is a female Ugandan aged 5 years and in middle class. Her parents who both live in the Mayuge district took the decision to have Hatimah start her early childhood education at Kathy’s Centre after being told by a friend about the exciting and beneficial educational environment set up for children like Hatimah. They have never regretted their decision and her parents said that ‘Hatimah today has developed so much since those first days she reported at school’. (See the picture of Hatimah taking a quick nap on one of her first days)

‘Hatimah shows unique attributes and qualities now from being at Kathy’s Centre and this consequently has shown to transform her character whilst at home too.’

Teacher Jennifer  is so proud of Hatimah and applauds Hatimah’s development noting that, ‘her zeal to learn whilst at school is so encouraging’.

‘She likes using English all the time, which has given her chance to advance her spoken skills and also greatly improve in her class performance.’

Jennifer further notes that Hatimah is doing so well, ‘her activeness in class has made her an outstanding girl who is kind and thoughtful. She is always up for helping fellow pupils during activities in and out of class time, setting a good example for other pupils.’

Hatimah loves sports and particularly athletics, which she does with passion and for fun! ‘Her determination and enjoyment drive her to put up a good performance and she has always been the best in this area.’

‘If this talent is developed in the future, we could see a great athlete in Hatimah!’

Middle class teacher Grace said that ‘Hatimah is such a brilliant and intelligent girl, so willing to learn, socializing and helping others’, she added ‘in the sharing skills she tops her fellows’ which she attributed to a good start at home alongside her education.

When reporting back to school for 3rd term, Hatimah’s mother, whilst interacting with the school was full of praises for the work done by the teachers to improve the general lifestyle of her girl.

She reported ‘at home she is so helpful and likes involving in leading prayers and being so close to her elder sister which was not so common before.’

Just like at school Hatimah has surprised her parents and other people at home with the way she has changed in her lifestyle at such an early age. 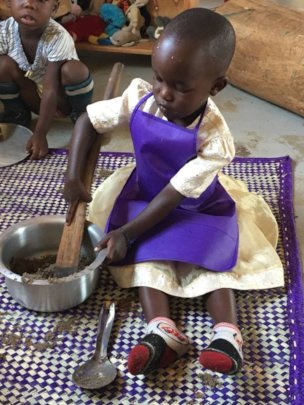 Enjoying her time in the Role Play area 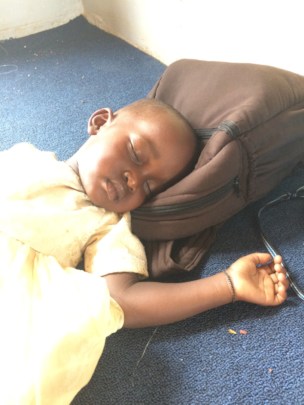 Sometimes a rest is needed after learning!