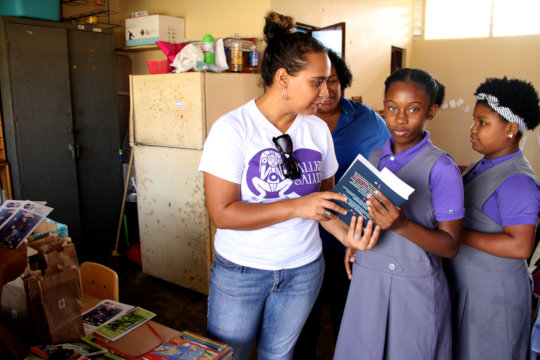 In the months following Hurricane Maria, the Funders' Network of Puerto Rico activated its FORWARD Puerto Rico Fund, awarding grants to community- based organizations that were helping the most vulnerable populations of the island. Now that the emergency has stabilized and Puerto Rico is in a recovery and rebuilding stage, grants have focused on the long-term. That includes strengthening the financial stability of community-based organizations, which enables them to quickly respond to future emergencies.

Before the Category 5 winds of Hurricane Maria even reached the coast of Puerto Rico, the island was already years deep in another crisis. Its financial troubles generated a $73 billion government debt that was being felt by many private citizens, sparking a mass migration to mainland United States. The nonprofit sector of Puerto Rico also found itself struggling, with many organizations living proposal to proposal, grant to grant, their staff sometimes going weeks or even months without a paycheck.

La Red recently invested over $1 million of its the FORWARD Puerto Rico Fund in 15 organizations to create reserve funds as a “rainy day" savings to be used in case of future emergencies.  Depending on the size and budget of each organization, they received up to $100,000.

Many of those organizations were precisely the ones that stepped up during and after the hurricane to feed and provide basic necessity items to thousands of people, bring solar energy and water purification systems to forgotten parts of the island, and preserve the island's patrimony and natural resources in the face of unprecedented challenges. Some had emergency revenue or enough savings for a month or so of regular operations. While others already faced challenges obtaining funding long before the storm.

"The idea is to give them a financial cushion in case of future emergencies so that they can continue operating," explains Janice Petrovich, the former executive director of the Funders' Network of Puerto Rico. “These organizations went above and beyond during and after the hurricane, and this is a way to help them look to their future and support their sustainability," expresses Petrovich.

Grants for reserve funds are unusual, even though nonprofit groups often note their importance.  “We listened to what they were telling us. Their ability to respond quickly to an emergency depends on having a pool of funds that they can tap into,” she adds. "This initiative is quite unusual in the world of philanthropy, even though it is so important to the financial health and resilience of nonprofit groups.”

For organizations such as Beta-Local, a non-profit that supports Puerto Rican cultural agents and independent artists, setting up an emergency fund had not been possible because funding for arts programs is typically geared towards specific projects, leaving them very little flexible funding to support their operational budget, let alone a savings account.

Anahi Lazarte, Beta-Local's administrator explained: “An emergency reserve will allow us in times of crisis to continue our mission of supporting the local independent arts scene. We're thinking about the future, specially how we can continue to grow that reserve fund. It's a relief and gives us confidence that if another emergency were to come up then we know those funds are available to us," says Lazarte.

Taller Salud is a community-based feminist organization that has spent 40 years improving women's access to healthcare, reducing violence, and advancing the economic development of women through education and activism. "At Taller Salud we believe that when women prosper their communities become stronger and the country gains competence. We believe that the best way to support women is by investing in them and their leadership; but not any kind of leadership, a sustainable one, which ensures its future management by making prudent use of its present resources," expressed executive director Tania Rosario.

With access to emergency funding, Taller Salud now has a safety net with which it can confidently continue providing services and developing projects to help the women of the town of Loíza, where the organization is based, and their communities.

"It means the possibility of guaranteeing the continuity of our services in the event of an emergency. It also means continuing to build sustainable leadership for Puerto Rico," added Rosario.

The FORWARD Puerto Rico Fund supports innovative approaches to help Puerto Rico prosper.  Puerto Rico’s recovery and rebuilding is a long-term effort. Hurricanes Irma and Maria devastated an island that was already reeling from a longstanding economic crisis. Quickly after the hurricanes, the Fund provided emergency funds to vetted, high impact local grassroots organizations that were offering immediate assistance to those affected. Now, the Fund is pursuing essential long-term strategic priorities to help move Puerto Rico forward.  This report describes the work that is being done by one of the organizations supported through the Fund. 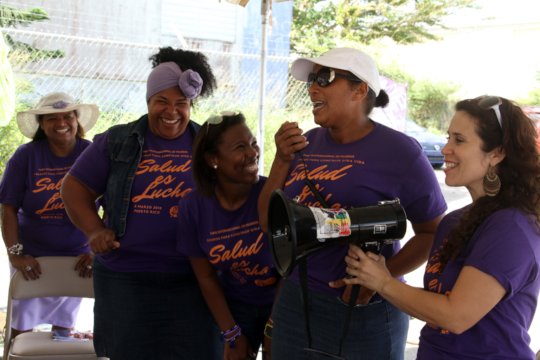 Taller Salud is a community-based organization. 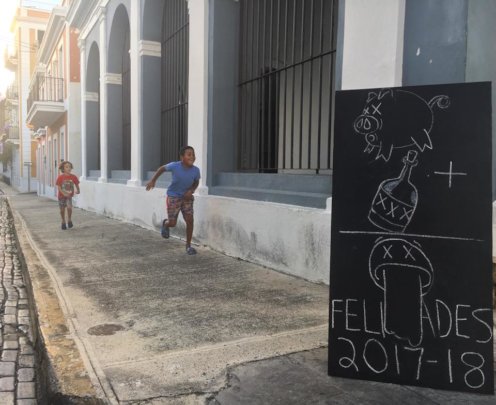 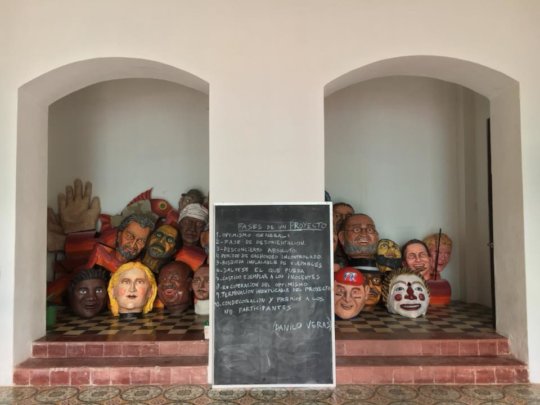 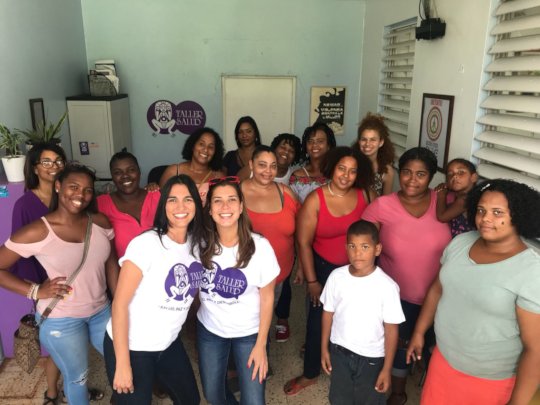 Sixteen months after Hurricanes Maria and Irma passed through Puerto Rico, Tania Rosario reflects: "I think one of the lessons of the hurricane, at least for me, is that the disaster is not natural. The disaster is social. The hurricane is an event, but the disaster has dimensions that are avoidable. It's possible to avoid the disproportionate consequences that the hurricane has on one family more than on others. It seems that one of the most important lessons has to do with listening to the voices of the people that are the most affected, if they are not taken into account when designing the response to the hurricane, in all probability the response (of the government) will be disorganized, arbitrary, and cruel. Which it was."

Rosario is the executive director of Taller Salud, a community-based feminist organization that for 40 years has dedicated itself to improving access to healthcare, reducing violence, and promoting the economic development of women through education and activism. The headquarters of Taller Salud are in the town of Loíza, which was hit by both hurricanes.

A few days after Hurricane Maria, the Taller Salud team arrived in Loíza searching for their participants. They found a community leadership composed of women who had already surveyed the needs of their communities, from identifying the bedbound elderly, dialysis patients or those in need of insulin, babies and pregnant women, to how much water, bread, rice, and other supplies were left. "It was not only a detailed census but very much focused on preserving life and avoiding death," Rosario describes.

With this leadership structure in place, Taller Salud was able to broaden their reach, channeling donations and resources that came to them through community networks, which allowed the aid to reach as many people as possible. Their scope extended to 14 other municipalities and according to their latest data analysis, they managed to impact over 20,000 people.

As a result of this initiative, Taller Salud established a formal program called Recuperación Justa, sponsored in part by the ADELANTE Puerto Rico Fund, and which was divided into three work areas.

First, the organization developed a virtual map of the town of Loíza, with comprehensive information provided by community leaders, as well as meeting and distribution points. It also identified available resources so that in case of a future emergency they would know how and where to channel the aid as it arrives.

Secondly, they identified problems and possible solutions within the community. After the hurricane, the biggest concerns had to do with housing reconstruction, claims to FEMA, land titles, sanitation, pest control, and debris removal. "They identified the problems and we supported them in developing a solution within the community so that it wasn't imposed on them from outside," says Rosario.

The third area was case management, assisting participants who required additional assistance such as psychological intervention, mediation, or an escape plan from domestic violence.

"The development of the Recuperación Justa program is the natural evolution of our work towards a program of community organization and political advocacy, so that the community itself can develop advocacy strategies, advocacy projects that benefit them, monitoring and holding the government accountable," says Rosario.

"We attended to the hurricane crisis in phases, we never thought it was a long-term project or that it would have the reach that it had," reveals Rosario. "It's a step towards empowering these communities to avoid another disaster on the scale of Hurricane Maria."

The FORWARD Puerto Rico Fund supports innovative approaches to help Puerto Rico prosper.  Puerto Rico’s recovery and rebuilding is a long-term effort. Hurricanes Irma and Maria devastated an island that was already reeling from a longstanding economic crisis. Quickly after the hurricanes, the Fund provided emergency funds to vetted, high impact local grassroots organizations that were offering immediate assistance to those affected. Now, the Fund is pursuing essential long-term strategic priorities to help move Puerto Rico forward.  This report describes the work that is being done by one of the organizations supported through the Fund. 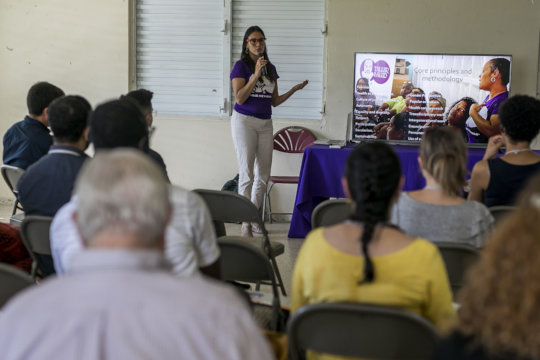 In October, donors visited the town of Loiza. 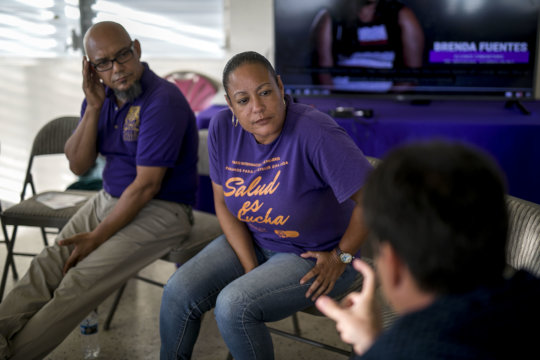 An Assessment of the FORWARD Puerto Rico Fund's Emergency Grants 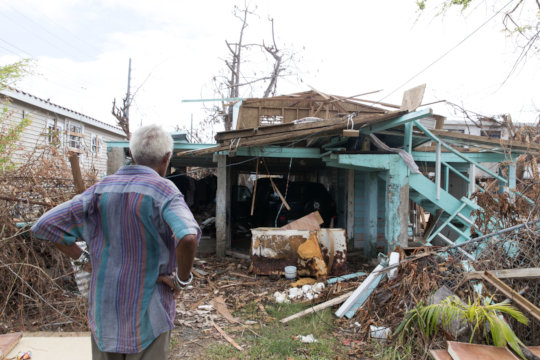 The FORWARD Puerto Rico Fund (Fondo ADELANTE Puerto Rico) was created by the Puerto Rico Funders Network (Red de Fundaciones de Puerto Rico) to strengthen the capacity nonprofit groups to advance social justice and provide innovative solutions to the island’s vexing problems. The Fund was created by the Red de Fundaciones de Puerto Rico in early 2017 as a vehicle to promote partnerships between local, national and international philanthropic organizations. Investments in the FORWARD Fund grew quickly after Hurricane María devastated the island in September 2017. La Red applied these funds toward emergency grants for local grassroots organizations with proven records that were providing direct assistance to affected communities. The Fund raised $6.4 M in one year from over 20 local, national and international foundations and over 700 individuals. Twenty-four organizations received a total of nearly $1 M in emergency grants. This report examines the results of the work supported.

The groups reported that they collectively:

The FORWARD Puerto Rico Fund supports innovative approaches to help Puerto Rico prosper.  Puerto Rico’s recovery and rebuilding is a long-term effort. Hurricanes Irma and Maria devastated an island that was already reeling from a longstanding economic crisis. Quicklyafter the hurricanes, the Fund provided emergency funds to vetted, high impact local grassroots organizations that were offering immediate assistance to those affected. Now, the Fund is pursuing essential long-term strategic priorities to help move Puerto Rico forward.  This report describes the work that is being done by one of the organizations supported through the Fund.