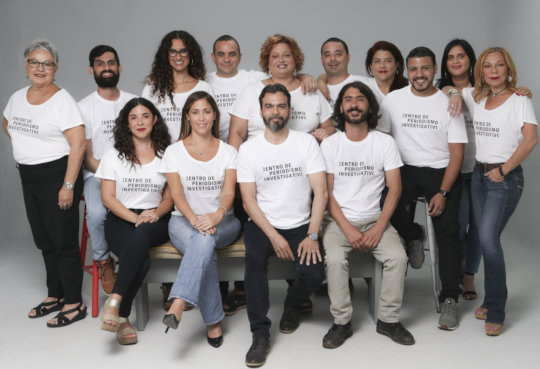 Since its founding eleven years ago, the Center for Investigative Journalism (CPI, in Spanish) operates differently from the rest of the local media. It uses journalistic research and litigation as tools to promote and defend the right to information access in Puerto Rico. Being a non-profit organization, CPI is free from corporate or political ties, allowing it to oversee the work of public and private entities, demanding greater transparency and open communication with citizens.

In the last two years, CPI established its reputation locally and internationally for two investigations in particular. CPI's reporters were the first to call attention to the actual death toll of Hurricane Maria, when the government still claimed an unrealistically low number of official deaths. This gave way to several independent investigations and forced the local government to revise the official numbers. More recently, CPI published the controversial Telegram chat which resulted in mass demonstrations leading to the resignation of former Governor Ricardo Rosselló and most of his cabinet.

Last month, CPI launched a new and important project, made possible thanks to a grant from Red de Fundaciones de Puerto Rico. On September 23rd, a symbolic date because of its proximity to the second anniversary of Hurricane Maria in Puerto Rico, CPI launched the website LosChavosdeMaria.com, containing databases, news stories, and investigations about the disbursement and management of the hurricane recovery funds. In the months before the launch, CPI published some stories on their official website (http://periodismoinvestigativo.com/) under the tag Los Chavos de María.

"Some stories are more explanatory about how the recovery process works, others are more expository, such as the article exposing the deficiencies of the houses reconstructed by the (Department of Housing's) program Tu Hogar Renace which many non-profit organizations have had to fix, the lack of transparency involving contracts granted by the government to private contractors, the revolving door of FEMA officials, there's a bit of everything," explains CPI's executive director Carla Minet.

The idea for LosChavosdeMaria.com came about because the website where the government was supposed to publish information related to the use of recovery funds (recovery.pr) turned out to be very deficient and the information was difficult to understand. To address this issue, CPI created a team of journalists dedicated exclusively to covering topics related to hurricane recovery. For almost two years, this team conducted research and wrote stories that explain in a concise manner how the recovery process is taking place and the problems certain populations are facing. On the new website there is also a section where citizens can report any type of fraud.

In addition, there are stories related to vulnerable groups and specific topics not being covered in mainstream media outlets which are also being underserved by the government; for example, the transgender population, coastal communities and fishermen, and poor communities, particularly in terms of home reconstruction efforts.

The purpose of this project is to give citizens the tools and the knowledge that will empower them to make effective use of the recovery funds and play an active role in the recovery process. "There is a lot of information which, as I understand it, could result in a better quality of life for people, and above all participation, because if people don't know what's happening, they don't participate, and if they don't understand the recovery process, then it's also much harder to participate," points out Minet.

As they've proven before, information is power and can be a catalyst for major social change. "When we do these investigations, we expect changes in public policy, that things will change," concludes Minet. 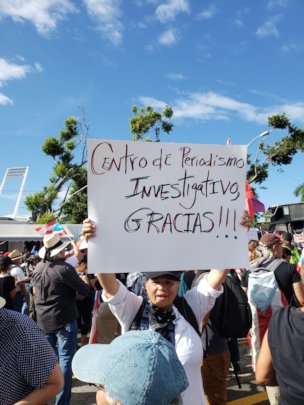 A demonstrator at a march thanks the CPI 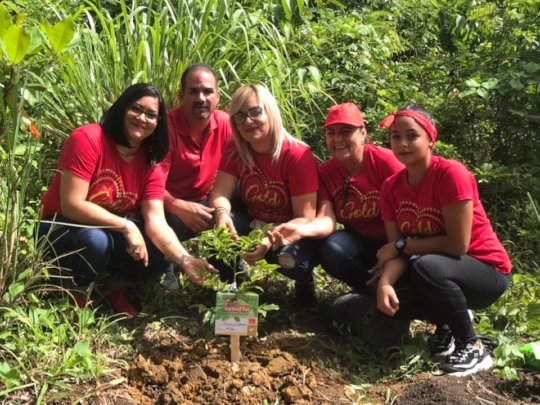 Red de Fundaciones de Puerto Rico (La Red) would like to thank you for your recurring contributions to the FORWARD Puerto Rico Fund through GlobalGiving. Since we established the Fund in 2017, donors like you have given us the ability to continue working towards a fair and equitable reconstruction of Puerto Rico in the midst of a double crisis: an ongoing economic depression and the devastation caused by Hurricanes Irma and Maria.

How your donation helps Puerto Rico

Your contribution helps us promote government transparency and accountability regarding the use of recovery funds to ensure they target the most vulnerable populations. It also helps us strengthen local nonprofit organizations that day after day face innumerable challenges to achieve this goal.

To date we have:

Other efforts undertaken by La Red

La Red is the island’s first and only philanthropy serving organization (PSO). We bring together organizations that make grants in Puerto Rico for joint learning and action, including collaborative and aligned grant making. We also undertake research on issues relevant to philanthropy to better understand the impact of our collective effort and identify key areas to support. Finally, we advocate for the strengthening of the nonprofit sector in order to enhance its ability to improve the lives of vulnerable populations on the island by advancing equity and social and environmental justice.

Again, we are grateful for your continued support. You may find more info on our work in our website or by contacting us through our email or social media platforms.

We’d love to hear from you! 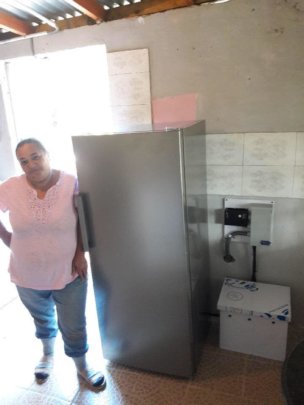 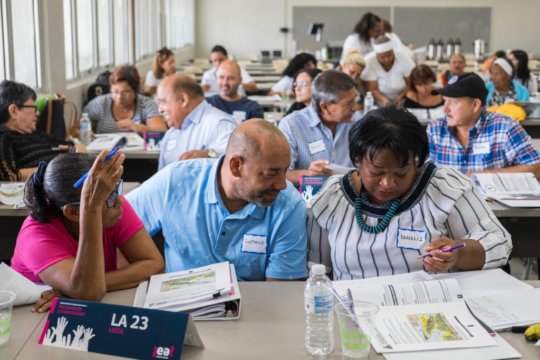 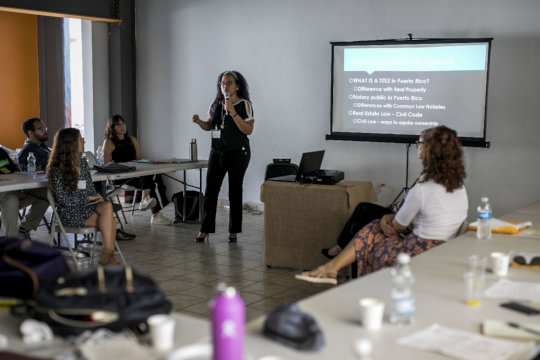 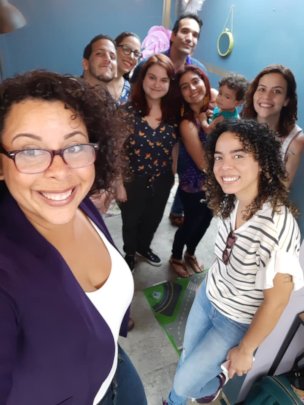 Many people take for granted their right to have a home, a community, access to schools and hospitals. However, there are thousands of people who do not have that security because their ability to repair or rebuild their houses depends on the assistance they receive from the state, their rent is subject to private entities that can speculate with the land or if the public school closes, forcing the family to move so their children can have an education. Because the right to a roof is not just the house or the property, it is the human right to decent housing.

"A decent home is a home that is adequate, affordable and accessible for people with functional diversity, for example. We say that it's a dwelling with secure ownership, that is, nobody can take it away from you arbitrarily, but it also protects a social fabric. It's not just a house, it's part of a community," explains Ariadna Godreau-Aubert, executive director of Ayuda Legal Puerto Rico, a non-profit organization that advocates for social justice and changes to public policy surrounding issues such as decent housing. While they don't offer direct services, they work with collaborators, free legal service providers, and community-based organizations such as Taller Salud, Proyecto Matria and IDEBAJO.

In the months after Hurricane Maria, Ayuda Legal Puerto Rico visited more than 70 communities around the island, and in the process, they realized that Puerto Rico is experiencing a housing crisis. They've since focused their efforts on legal projects involving the right to a roof, among other social justice projects.

"As lawyers and as social justice activists, we believe that if you defend the right to housing, you protect other fundamental rights," expressed Godreau-Aubert.

Ayuda Legal Puerto Rico received a grant from the Funder's Network through the FORWARD Puerto Rico Fund with the objective of developing a campaign supporting education, advocacy, and community legal assistance for vulnerable communities to secure government resources in order to conserve and rebuild homes damaged or destroyed by hurricanes Irma and María. The project, entitled Recuperación Justa (Fair Recovery), focuses on the issue of the Community Development Block Grant Disaster Recovery Program (CDBG-DR), provided by the federal Department of Housing and Urban Development (HUD). The interest of Ayuda Legal Puerto Rico is to avoid the forced displacement of vulnerable communities through the misuse of these funds.

"CDBG-DR funds have more to do with long-term reoccupation, and as the government has said, approximately $20 billion is expected for Puerto Rico and if this money is used well, it could be the only injection of capital that these communities will see for many years for economic rehabilitation, infrastructure, and housing," affirmed Godreau-Aubert.

"If they are misused, it'll be like New Orleans, it'll serve as a pretext to remove people, to speculate on the ground, and money will never get where it's needed," she warns.

Recuperación Justa seeks to encourage the participation of the very people who would be affected by this process and the organizations that defend them by influencing public policy, defending the right to decent housing, and ensuring that recovery plans respond to the real needs of the people.

This comes in response to the discrimination experienced by certain communities, such as when FEMA demanded property titles as a condition for granting rebuilding funds when federal and local laws do not require that, something that harmed low-income communities where residences have been passed down generation after generation and the original titles don't exist. Additionally, the possible displacement or expropriation of the homes of people living in low-income communities can only be addressed through changes to public policy and awareness of the measures taken by the government that harm the most vulnerable while benefiting private interests. Both examples are evident in the Action Plan designed by HUD that establishes how CDBG-DR funds will be used to address the humanitarian crisis and reconstruction after the hurricanes.

"For example, right now there is a prohibition in the Action Plan that establishes that properties that are in floodable zones or areas susceptible to landslides will not qualify to be repaired or reconstructed. The new maps establish that more than 40% of the surface of Puerto Rico is either floodable or susceptible to landslides, so it would prevent people who need the money to repair or rebuild, presumably poor people who have not been able to repair or rebuild two years after the hurricane, but could allow private money, through 'opportunity zones,' to build in those same areas. You'll have coastal communities that are going to be displaced because they will not be able to repair their houses, but a hotel can build in the same area," points out Godreau-Aubert.

Ayuda Legal Puerto Rico's job is to empower communities and community-based organizations by providing them with information about their rights and the legal alternatives they can use to protect their property. This includes a legal toolkit available on the Ayuda Legal Puerto Rico website that contains a glossary of terms, summaries of plans, key concepts, and other types of free educational material written in an accessible and inclusive language. Ayuda Legal Puerto Rico also facilitates the Jornada de Participación Comunitaria CDBG-DR, a coalition of entities working for social justice in Puerto Rico, which has given communities greater access to the process of allocation of CDBG-DR funds, such as extending the hours of public hearings so that people with jobs or who live outside the metro area can attend. Ayuda Legal Puerto Rico has also been very active in the press exposing their findings.

"Part of the work we have been doing is to be very open about this process to demand that the government respond and be influenced by the people who really need it," she adds.

The FORWARD Puerto Rico Fund supports innovative approaches to help Puerto Rico prosper.  Puerto Rico’s recovery and rebuilding is a long-term effort. Hurricanes Irma and Maria devastated an island that was already reeling from a longstanding economic crisis. Quicklyafter the hurricanes, the Fund provided emergency funds to vetted, high impact local grassroots organizations that were offering immediate assistance to those affected. Now, the Fund is pursuing essential long-term strategic priorities to help move Puerto Rico forward.  This report describes the work that is being done by one of the organizations supported through the Fund. 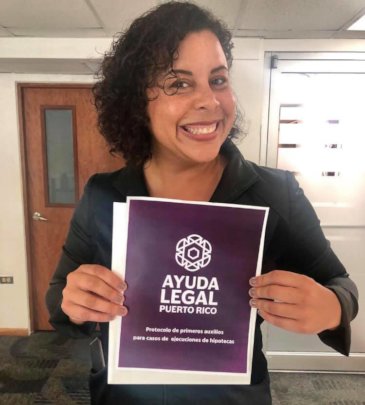 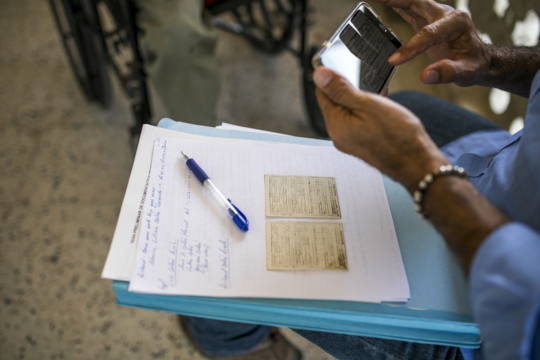