Harvest Season at The Donation Station 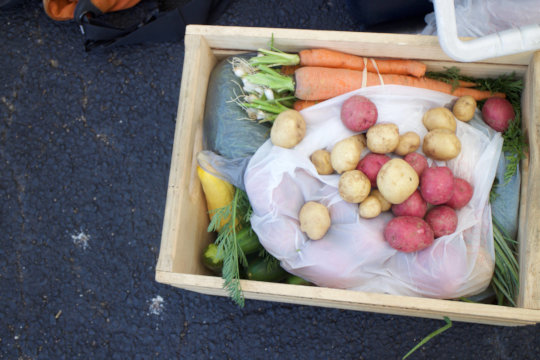 The Donation Station at Community Food Initiatives in Athens, OH, is in the midst of yet another busy season!  We’re at our local farmers market every Wednesday and Saturday, and at a local produce auction every Monday and Thursday, which means that we’re spending the majority of our time out gathering produce to distribute to people in need.  During this time of peak produce we host an extra day of distribution, and are even sometimes able to call on pantries for a special one-time pickup if auctions and markets are especially fruitful. Just last week we received nearly 2,000 pounds of produce at the produce auction alone, enabling us to distribute more than a ton of fresh, local, food to pantries and other organizations working to fight food insecurity in southeastern Ohio.

It’s inspiring to be partnered with so many individuals, volunteer groups, businesses, and non-profits in this region of Appalachia that share a common goal of providing equitable access to healthy food.  Nelson Mandela wrote that “overcoming poverty is not an act of charity, it is an act of justice,” and at CFI we firmly believe that everyone deserves to be able to eat -- not just food, but food that will support their health and well-being.  Well-being on an individual level increases community-wide well-being, so work being done to address food insecurity is critical for resilient and sustainable communities. Thanks to our partners and to the amazing, continued support of generous donors, we’ve been able to distribute 38,085 pounds of food so far this year, and have invested thousands of dollars back into the local economy, directly supporting farmers who are producing food that is good for people, good for the planet, and therefore good for the economy.  A truckload of potatoes, apples, winter and summer squash, melons, tomatoes, onions, greens, beets, and other gorgeous fruits and veggies -- all for distribution -- is truly a beautiful thing!

In addition to handling tons of produce (literally!) each week through the Donation Station, CFI is in an exciting period of growth with new staff and volunteer members.  Executive Director Scott Winemiller, Gardens Program Manager Molly Gassaway, and Donation Station Program Manager Susie Huser all joined the CFI team this summer; Caitlin Garrity moved into the new position of Special Projects and Outreach Coordinator; and an outstanding group of new COMCorps and VISTA members started this summer as well.  Additionally, CFI continues to work on the SEO Foodlink project, an initiative creating a valuable resource hub for a people-centered, resilient food network. Only in its second year and still evolving, the project has already received considerable interest and positive feedback from community members.

As many from this area are aware, Ohio is ranked 47th in the nation for food security.  Within Ohio, food insecurity is worst in this southeastern region we love and call home, which means demand for the food and services we provide at CFI is great -- so great, in fact, that it often exceeds our supply.  It can be overwhelming to think about all of the people facing food insecurity, but one of the most encouraging things about experiencing what we do at markets and auctions first-hand is seeing the cumulative impact of many hands.  At market people drop donations in the jar and bring produce from their garden, and each person -- whether a young kid, parent, college student, or someone who’s been supporting the Athens Farmers Market for multiple decades -- knows they’re making a difference.  Coming together as a community, supporting the community, supported by the community -- This is a model for resilience, and we’re thrilled to be part of it. 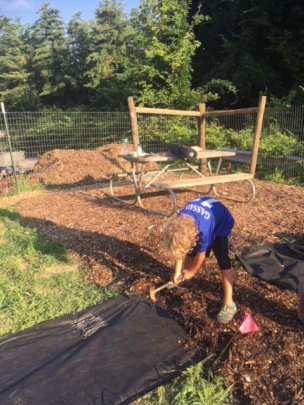 As Helen Keller once said, “Alone we can do so little, together we can do so much.” This holds true in most aspects of life, and certainly we are finding this to true with the rebuilding of the Nelsonville Community Garden.  Last week, we were pleased to have several volunteers attend our first ever “work party” at the new garden site. Not only were we excited about the number of volunteers, but we were especially excited about their age range: from 5 years young up to over 60 years wise!  What a joy it was to see those young and “old” working together towards a common goal (Turns out kids are actually both excited about and good at hammering in landscape pins...who knew).

After this work party, we’re excited to report that we are officially halfway done with the laying of, pinning down, and mulching of the paths. In the back half of the garden, some of the weeds are practically as tall as our 6’4” volunteer but the front half is really taking shape and looking more and more like a true garden space.  It is hard to believe that only earlier this summer it was a parking lot!

This long and involved process would be so much longer without all help we have had in the past and continue to receive from all sorts of sources:  our partner organizations, community volunteers, students and local businesses to name a few. There are some community members that already know they want to have a plot in this garden once it is done so they work hard to help us get the area all ready.  An intern from the Ohio University Plant Biology program is interested in soil science and is working on helping turn the top soil into soil that will someday provide nutrients for growing food. A local tree care company has been quite generous with donations of dump load after dump load of wood chips.

All these folks teaming up together is what makes huge projects like this possible.  How fortunate we are to be working with a community of people concerned enough about where their food comes from that they are taking these huge steps with us to forge a growing space from scratch.  Our continuing hope is that the enthusiasm emanating from those already involved will spread to their neighbors and then to their neighbors and so on. We are thankful for the team we have and look forward to one day having even more hands helping soon to get the other half mapped out.  (Plus install the fourth side of the fence, get the soil amended, build a compost system and a shed...stay tuned.) The list of tasks is never ending but luckily so is our community’s dedication. 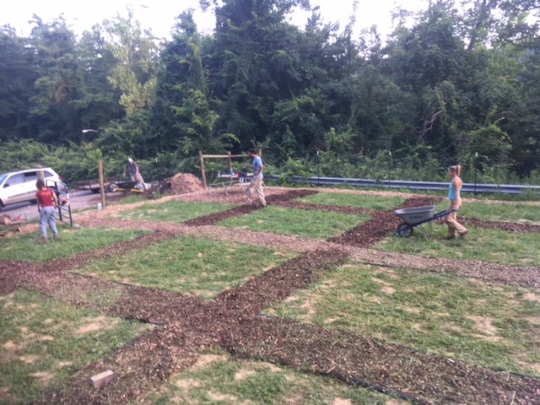 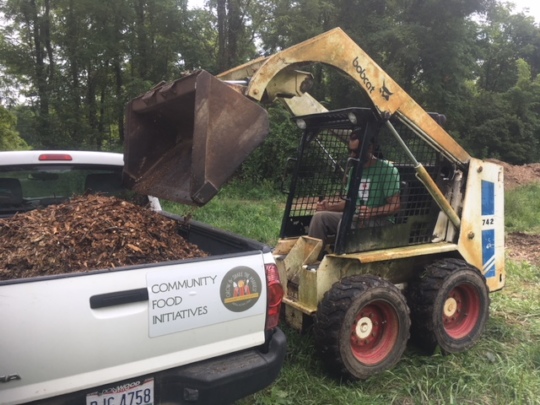 Making a garden out of a parking lot... 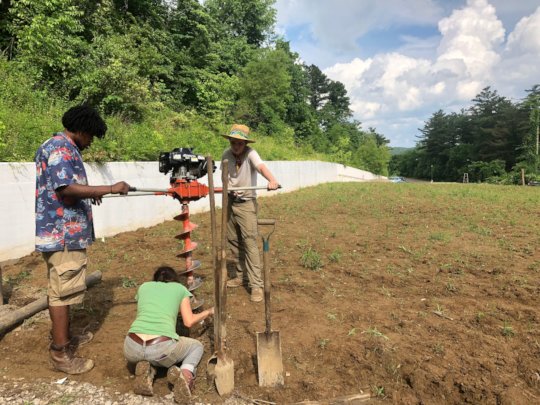 “It has been a long, hard process,” says Javi Devia, ComCorps member at CFI, “the change is happening slowly but surely.”  The site for the new Nelsonville Community Garden literally used to be a parking lot. The asphalt had to be split apart, ripped up and hauled away and what it left behind was an area that looked unfit for growing anything other than weeds.  A whopping 18 inches of topsoil had to be brought in and leveled. A soil test was conducted and a CFI intern is in the process of the tedious calculations required in order to add the correct amounts of amendments such as dolomitic lime, phosphorus, and blood meal to the soil that will become the garden plots.

Javi learned how to use a hydraulic post hole digger...what an adventure that was!  She and two amazing community volunteers successfully installed a deer-proof fence, complete with locust pole corners, around the entire garden space.  It was a long, physically brutal process but the result is a tough animal-proof fence that is sure to stand the test of time.

The next step was marking the plots and pathways.  We decided to go with 10’ x 12’ individual garden plots and a 3’ border along the exterior, just inside the fence.  All the way around the inside of an almost 8000 sq foot garden is a lot of weed barrier cloth to be laid! Landscape pins need to be  installed every couple of feet to keep it in place. Loads of mulch were donated by a local tree care company and we wheelbarrowed till dusk to get some of the paths covered.

We took our truck to the old garden site and could barely find our picnic table!  The Johnson grass-filled swampy area practically swallowed it, but we fished it out and hauled it to the new site.  The freshly laid weed cloth and mulch will help keep our new community gathering area at the garden weed free.

Our first “New Nelsonville Community Garden Work Party” is scheduled for next week. We are hoping for a big turnout...with plenty of extra hands, we will aim to get the rest of the weed barrier cloth laid over the paths, secured, and mulched.  Afterwards we plan on celebrating by sharing a jug of iced tea in our new, weed free picnic space. Check back in a couple of weeks for an update on how great the new garden space will be looking by then! 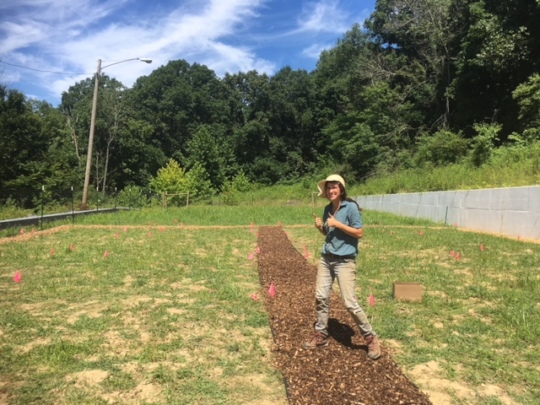 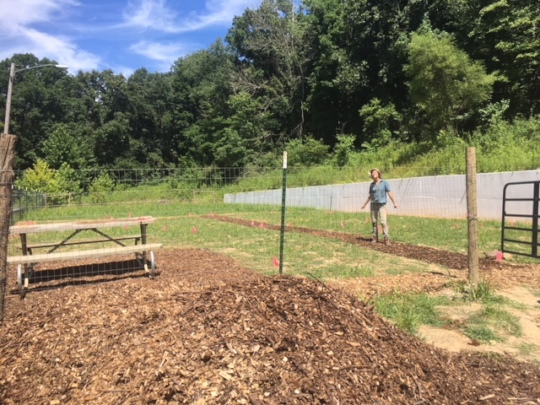 Nelsonville Community Garden's Picnic Table!
‹ 1 2 3 4 5 6 7 8 ›
WARNING: Javascript is currently disabled or is not available in your browser. GlobalGiving makes extensive use of Javascript and will not function properly with Javascript disabled. Please enable Javascript and refresh this page.