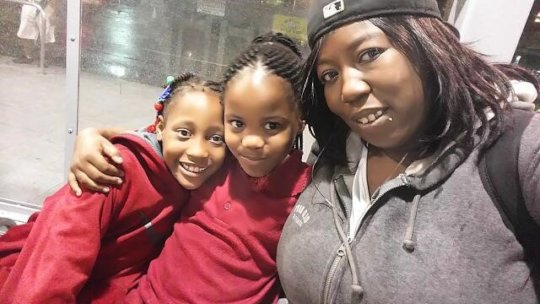 Originally from Pennsylvania, Ms. Bobo moved to Texas in 1999, with her mother and siblings. In 2016, after living in Houston for nearly 20 years, Ms. Bobo came home from work one day to a condemned apartment, with no prior notice given. With nowhere else to go, this was the event that triggered her homelessness.

While trying to navigate through the streets for the better part of two years, Ms. Bobo’s main focus was always on her daughters, making sure that they never went without a roof over their heads. “I would not allow for them to be out there with me,” said Ms. Bobo. “I refused to let that happen.”

It wasn’t until Housing Navigators Nye Hicks at SEARCH Homeless Services, Inc., and Tonoa Bond at Career and Recovery Resources, Inc., reached out to Ms. Bobo this April, that a glimmer of hope began to shine through. “I received a list of people experiencing homelessness for me to begin working with in April, and Ms. Bobo was the first person on my list,” said Nye. “I reached to her immediately to let her know she was eligible for housing, and within an hour she was there with me filling out paperwork.” Ms. Bobo also utilized resources through PATH Street Outreach through the Harris Center, The Beacon, and Healthcare for the Homeless – Houston, while experiencing homelessness.

Though the paperwork was quickly completed and Ms. Bobo was more than ready to have a home again, it wasn’t as easy as that. “It was really challenging, we faced a lot of barriers trying to get her an apartment,” said Nye. “From inspections failing to payments not going through, we worked for six months trying to get her into her new home.”

Despite multiple setbacks, including being told more than once she would no longer be able to move in while she was on the way to get her keys, Ms. Bobo remained hopeful. She credits Nye and Tonoa’s determination and compassion as to why she was able to get into permanent supportive housing. “We kept on top of each other,” said Ms. Bobo. “They helped me greatly through the whole process, and I tried to be there anytime I needed to be. It was a very emotional time for all of us, but we always had each other’s backs.”

When Ms. Bobo was able to walk through the door to her new home for the very first time, she says she felt absolutely ecstatic. “It was funny because no one, not even my mom or sister, believed that I finally had a home,” she said, with a smile slowly forming on her face. “I had to physically show them the keys! I even had Nye vouch for me that I did in fact have my own place, and I was ready to start my life again.”

When asked what she wishes people knew about those experiencing homelessness, two things come to mind: “For one, not every person who is homeless is cut from the same cloth, we all go through our own tragedies,” says Ms. Bobo. “And two, we are humans just like everyone else and being homeless does not change that; we’re just trying to find a place of our own.”

For now, she is focused is on getting back into a normal routine and spending much needed time with her two daughters. And even though they may not be the biggest fans of keeping their rooms clean, she says she sure enjoys being able to be under the same roof as them again. Her future aspirations include going back to school to get her degree, and eventually becoming a veterinarian technician.

Thanks to partners of the Way Home and Supporters like you, we were able to Welcome Ms.Bobo home. Thank you all for your support and Happy Holidays!

One Year After Harvey, Looking Forward to #2020 and Beyond 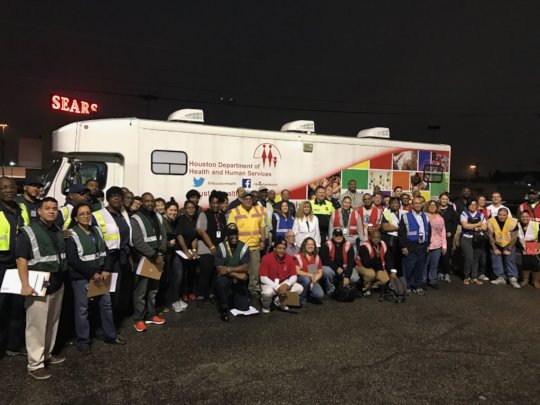 In the two months immediately after Harvey hit, the Coalition and partners of The Way Home were able to successfully prevent homelessness for nearly 1,000 people who had nowhere to go after the storm, BUT it was a major disruption to our already in-place homeless services and a devastating distraction from our planned work in 2018.

Despite the distraction and the increase in unsheltered homelessness, we are proud of what we accomplished through Housing For Harvey. Of the 334 households that moved into apartments, 206 of them have left the program to safe housing. This is a positive outcome and hopefully did what it aimed to, which was to prevent a large incoming wave of newly homeless individuals.

With the continued leadership from the Coalition for the Homeless the Way Home is making strides to bridge back the time and resources lost since the storm.

The Way Home utilizes a “Housing First” approach to solve homelessness by prioritizing the placement of homeless individuals and families into housing as soon as possible, and then providing voluntary supportive services as needed to help them remain housed.
Houston is leading the nation in solving homelessness and is a national model for other communities.

Since 2011, partners of The Way Home have reduced overall homelessness by 51% and unsheltered homelessness by 63%. In 2011, the Homeless Count identified 8,538 homeless individuals on the night of the Count.

The Key to our work is our systematic approach and key partnerships made throughout the our service area. Without the assistance of Global Giving we would be unable to reach and tell our message to people around the world. We thank you all for your assistance, and hope you continue to help “Be The Key” to ending homelessness.

State of Homelessness 2018- Harvey's impact on the Homeless System 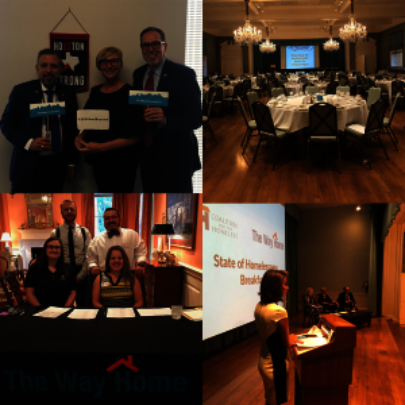 The Coalition for the Homeless held a State of Homelessness breakfast event at the Junior League of Houston on May 23. The event featured a panel discussion as well as the results of the 2018 Homeless Count & Survey.
Nearly 100 community stakeholders from partner agencies of The Way Home, local government agencies, and the business and philanthropic community attended the event, eager to learn more about the future of The Way Home, the region’s homeless response system. Panelists at the event included Marilyn Brown (President/CEO, Coalition for the Homeless), Robert Pulster (Regional Coordinator, United States Interagency Council on Homelessness), and Eva Thibaudeau, LMSW (Vice President of Programs, Coalition).

The panel, moderated by Kaitlin Monte (Fox 26), began with a look back on the work of The Way Home, including successes to-date. Thibaudeau spoke to the incredible collaboration of the local homeless service nonprofits – may of whom attended the event – and how their willingness to think outside the box led to many of our community’s successes. Pulster reminded those in the room that, although homelessness in Houston can feel overwhelming, Houston has led and continues to lead the nation on solving homelessness through innovative partnerships and an incredible “yes” culture.

Brown revealed the 2018 Homeless Count & Survey results which showed an increase for the first time since 2011. The majority of the increase was seen in the unsheltered homeless population, and 18% of unsheltered homeless individuals surveyed during the Count reported that their homelessness was due to Hurricane Harvey.
“Hurricane Harvey was a major disrupter to the work of The Way Home, both in terms of diverting resources and contributing to the increase in unsheltered homelessness,” said Brown. “In just 41 days, partners of The Way Home shifted resources to successfully prevent homelessness for nearly 1,000 people who had nowhere to go after the storm. But it was a major disrupt

ion to the homeless programs already in place and a devastating distraction from our planned work in 2018.”
With an eye to the future, Pulster shared insights about an anticipated update to the federal plan on ending homelessness and what that might mean for the Houston area. Our region can expect that individuals experiencing non-chronic homelessness will be one subpopulation of focus in the future. Brown and Thibaudeau reiterated the importance that all of the partners in this work need to keep putting one foot in front of the other and continue to come to the table to end homelessness.

“We’ve proven that we have a greater impact when our voices are united, when we’re at the table together, and when we are working together toward our common goals,” said Brown.

The Coalition also announced the launch of The Way Home’s new Facebook page at the event. As lead agency to The Way Home, the Coalition will manage this new social media channel as a collective space where partners can share and post their success stories and how their organizations and staff are committing to the work to end homelessness through #2020AndBeyond! For more information about engaging on this new channel, visit our digital toolkit: https://bit.ly/TWHToolkit.