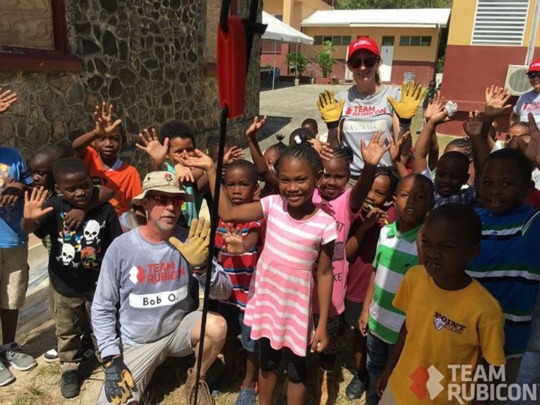 Local education officials are determined to get children back into class as soon as possible and Team Rubicon has been collaborating with the islands’ education ministry to help in this vital task. Many of the schools that are being repaired will take in pupils whose schools have suffered more severe damage.

Officials have described the passage of two such massive storms in such quick succession as unprecedented. The scale of the devastation prompted Team Rubicon UK to expand its initial operation by sending 38 volunteers, including veterans and emergency responders, to the region on 20 September, making this our largest operation to date.

“Any bookshelves or cupboards, which hadn’t been thrown around and spat out in some mangled form were drenched, growing mould and totally unusable. From now on this school can only get better and the impact for the community was felt beyond bricks and mortar.” TR volunteer Lizzy Stileman

Team Rubicon UK and Serve On volunteers assessed damage to the Robinson O’Neal Memorial Primary school in North Sound which caters for over 200 children. The school’s roof was torn off during Hurricane Irma and the building was pounded again during Hurricane Maria. Four volunteers worked alongside locals to fill three 30-foot skips with debris, including soaked and shredded school books, roofing material, children’s reports, chairs, musical instruments and toys.
Volunteers also tackled damage to the Ciboney Centre for Excellence, which provides education to around 100 pupils. Working alongside school staff and local volunteers, they gathered anything that could be salvaged to store in a container. They then began to clear out the school building.

Team Rubicon volunteers have also been clearing damaged schools in Tortola in close collaboration with the island’s Ministry of Education.

At Cedar International School in Kingston, volunteers repaired the perimeter fence, reinstated electric power to the septic tank pump, provided 3,000 gallons of clean drinking water for students and removed a downed tree in the play area.
Volunteers also got to work at Althea Scatliffe primary school, which has around 460 pupils between the ages of 5 and 10. Volunteers removed one tonne of debris, including shards of broken glass from the reception hall where children gather for morning assembly, eat their meals and play games. Debris was also cleared from first floor classrooms.
At Joyce Samuels Primary School in Belle Vue, Team Rubicon volunteers mucked out 11 classrooms, removing two tonnes of debris.
Volunteers also built new plywood classrooms at Elmore Stoutt High School so that children can return on October 5 to begin revising for upcoming exams.

Team Rubicon first sent volunteers to the Caribbean after Hurricane Irma hammered a string of islands in early September. Arriving less than 48 hours after the storm hit, teams made up of military veterans, emergency responders and civilians focused their relief efforts on the devastated British Virgin Islands and Turks and Caicos, with other volunteers based in Antigua and Barbados to organise logistics and help funnel aid through the region.

When Hurricane Maria threatened to wreak more havoc on already battered communities, the teams switched rapidly to storm-proofing shelters, securing debris and making sure residents were as prepared as possible. These teams were ideally placed once Maria had passed to assess the new damage and embark immediately on clean-up operations.

This week volunteers from Team Rubicon Australia and Team Rubicon Global have arrived in the region to add additional support - making this a truly global response effort to help those most in need. Veteran volunteers from across the globe are coming together to assist those in the wake of natural disasters. We are particulalry proud to be able to assist the schools and get them back up and running and to returning the youngest members of these communities to the classroom. 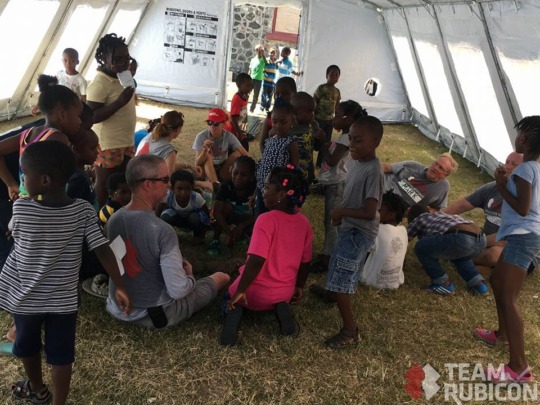 Update from Our Team Responding to Hurricane Irma

As Hurricane Maria continues its destructive path through the Caribbean, Team Rubicon volunteers currently deployed to the region are preparing to set off for the island of Dominica.

Team Rubicon UK currently have volunteers in the British Virgin Islands, Turks and Caicos, Antigua and Barbuda and Barbados, where 38 additional volunteers arrived on 20 September. Team Rubicon has concentrated attention on some of the areas worst affected by recent storm activity as well as working with communities, local authorities, partner charities and the British Military to prepare for Hurricane Maria.

Gillian, is a resident of Road Town, BVI. Her story:‘My home is gone, everything is messed up. People are dead, cars are mashed up, the trees are naked, everything looks different now. We need everyone from around the world to see that beautiful BVI is so different now since the bad days came. We need more people like you to come and help us. We have nothing. You are helping us make everything good again, and maybe in a hundred weeks, my BVI will be beautiful again.’ 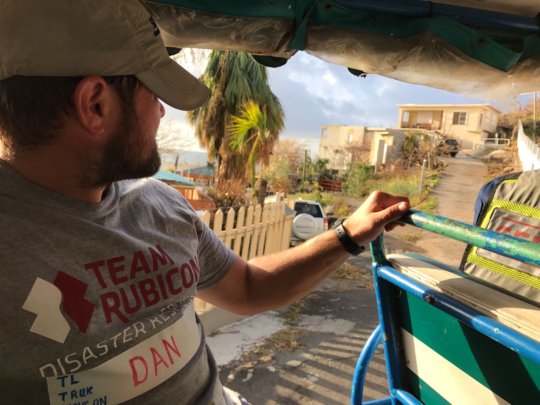 It’s been non-stop for the team since they arrived in Tortola in the British Virgin Islands. They’ve been clearing roads, shifting downed electricity poles, assessing community centres and listening carefully to residents who are desperate for help and information in the wake of Hurricane Irma.

Here’s what ex fire and rescue officer and Team Rubicon UK Operations Manager Dan Cooke had to say about conditions on the island:

“The devastation across the country is unrelenting.  Nowhere has escaped the extraordinarily powerful winds. Mile upon mile of debris has been scattered, without a single leaf left on any of the trees. Trees, cars, trucks, air-conditioning units, super yachts, speedboats, everything is randomly scattered across the island,” he said.

“It was a monumental effort and very worthwhile to re-open the pass,” Cooke said.

A big concern is the lack of information: 90 percent of the island is without mobile communication and most people are locked in an information vacuum.

Cooke said: “It is evident that the Team Rubicon UK and Serve On team are the first out on the ground and 90 percent of the population are absolutely delighted to see us. They have no electricity, no running water, they are short of food and essential supplies but are working together to clear up,” Cooke said.

“However, in some locations, it seems that disorder is starting to take place with evidence of small-scale looting. There is also a shortage of fuel across the island, resulting in cars queuing for what looked like hours.”

Hurricane Irma slammed into a string of Caribbean islands last week, killing at least 40 people before making its way to Florida. Winds of up to 185 mph battered homes, destroying up to 95 percent of buildings in some places and knocking out power and communications. The damage is estimated to cost billions of dollars and European nations have sent military reinforcements to help stricken residents and keep order.

We are hoping to get more volunteers onto the ground in the coming hours: we have a team trying to get to Turks and Caicos from the Dominican Republic, and another group left London this morning en route to Antigua. Thanks so much to British Airways and Airlink for making that happen. Another team is also heading into the region from New York. 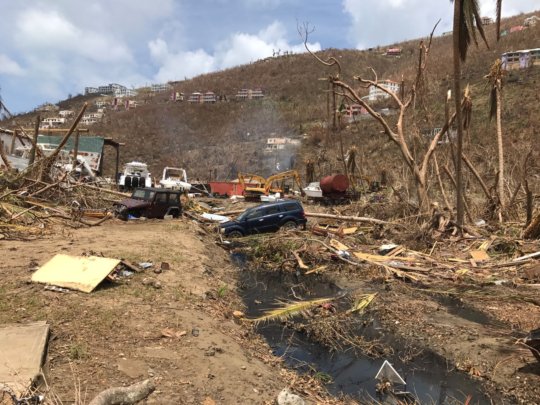 The carnage of Irma
‹ 1 2 3 4 5 6 7 8
WARNING: Javascript is currently disabled or is not available in your browser. GlobalGiving makes extensive use of Javascript and will not function properly with Javascript disabled. Please enable Javascript and refresh this page.