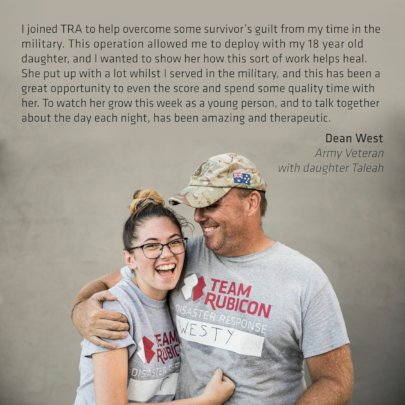 On the 18 March 2018, a bushfire began in the locality of Reedy Swamp, near Tarraganda, which spread east towards Tathra destroying homes and blocking one of only two roads out of the town. The New South Wales Rural Fire Service (RFS) confirmed that 69 homes were destroyed and 39 were damaged. “The embers were intense and literally raining down all over town starting up new spot fires everywhere,” according to one Tathra resident, Tom. Working alongside the Emergency Services and community leaders Team Rubicon Australia has deployed teams and incident management specialists in the immediate aftermath to assist the community in these critical early stages of the recovery effort”

“Yesterday I helped a lady, who had lost almost everything, find her father’s war medals and some family photos in the ashes of her house. She’d lost so much and it was a really emotional moment being able to return those important items back to her. Every time I deploy, I leave behind my family, which is hard, but I know they are proud of me and what I’m doing with TRA.” TR volunteer.

Our all-volunteer teams are comprised of Australian Defence Forces veterans repurposing their skills as first responders in the aftermath of natural disaster. With the level of destruction seen to this community, Team Rubicon Australia is supporting the recovery efforts in Tathra by assisting residents to identify and locate items in damaged/destroyed properties, conducting expedient home repair, and working on debris management. To date in Tathra we have completed 50 damage assessments and conducted 20 work orders. But we need your continued help and support to sustain our response effort in order to assist this community so very much in need.

Our plans are ambitious – but with your help we can deliver comfort and critical support to the community of Tathra.

“Then, the next day, up comes Team Rubicon so quickly and bam! They removed so much debris. I have to say how heartwarming this experience has been as a Vietnam veteran. That something favourable has come out of that period in my life. It feels really good and uplifting’. As a soldier for twenty-one years I can recognise that the crew from Team Rubicon are so professional and safety conscious. As an old soldier I can see it’s done safely, there are no cowboys, and it’s really pleasing. The speed of the response is amazing because there are so many other people worse off than me”, said local Tathra resident, Graham. 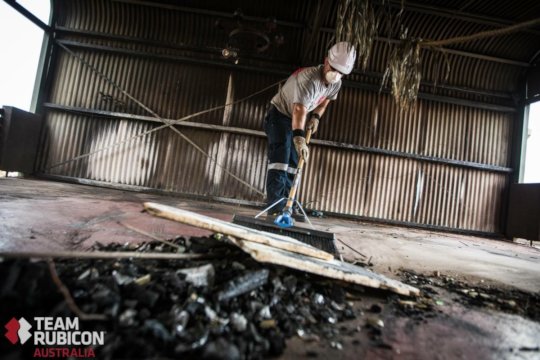 Clearing Debris in the Australian town of Tathra 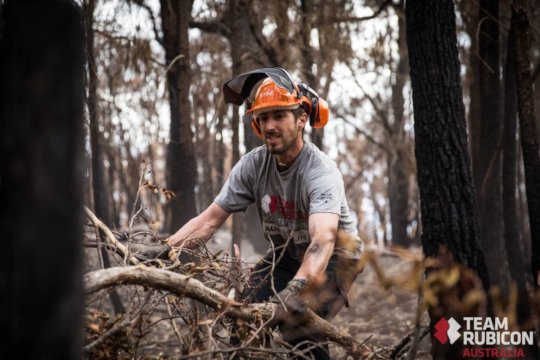 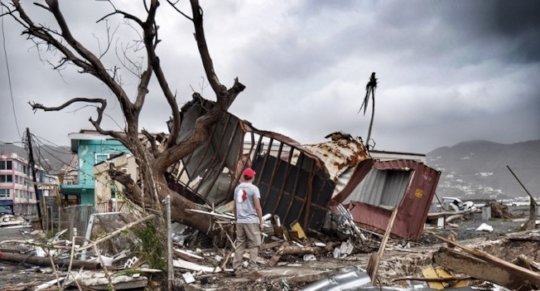 Case Study: Schools in the Caribbean

Your funding enabled Team Rubicon to have a team from the UK touchdown in the Caribbean, just 48 hours after Hurricane Irma made landfall, and to subsequently deploy 86 volunteers to help rebuild devastated communities.

Your funding enabled Team Rubicon to…

Your Impact as a donor:

Team Rubicon is a disaster response charity that uses a military approach to deliver rapid responses to global and domestic disasters. The organisation is designed to bridge the gap between a disaster occurring and large-scale aid arriving, giving veterans a renewed sense of purpose, community, and identity, post military service.

In September 2017 two Category 5 Hurricanes, Irma and Maria, devastated 80% of the buildings across the British Virgin Islands (BVI) in the Caribbean including many of the schools. In less than two weeks, thousands of children had their education disrupted across the British Virgin Islands after the hurricanes pulled roofs off schools, smashed windows and drenched textbooks, report cards and equipment in torrential rain. Getting schools back up and running was incredibly important to continued education, helping to give children a sense of normality, and their parents the time to try and rebuild their lives after the devastation.

Team Rubicon worked in collaboration with the Ministry of Education, government agencies, NGOs and residents throughout the BVI, to make shelters and schools as safe as possible so that children could return to education as soon as feasibly possible.

“I want to start by saying thank you to Team Rubicon for all of the help that was given to us. We were totally devastated by Hurricane Irma followed by Maria and it was difficult to see how we would get back up on our feet when we walked out of the doors that morning. But with help from teams like Team Rubicon we are slowing getting there and we are grateful.” Dr Marcia Potter, Permanent Secretary of the Ministry of Education.

Initially based out of Cedar International School on Tortola, Team Rubicon volunteers conducted repairs to the school and carried out assessments of many others in the area. One of the first two schools to reopen, Cedar began offering places to children who were not previously enrolled there, and UNICEF used it as a training venue for its children's psychosocial wellbeing program "Return to Happiness".

After a personal request from the Minister of Education, Myron Walwyn, Team Rubicon volunteers spent 48 hours with a local team led by Carlos Hadaway, Maintenance Supervisor of Elmore Stoutt High School, Tortola. The volunteers worked with Carlos’ team to convert the old Clarence Thomas Limited warehouse into a learning facility by constructing twenty-seven classrooms inside its shell. This work enabled students from Elmore Stoutt High School to return to education just one month after their high school was devastated by Hurricane Irma.

“I want to thank Team Rubicon for coming to the BVI and assisting us, giving us hope, and showing us that we can actually do this thing. We really appreciate it. You guys have been awesome.” Carlos Hadaway, Elmore Stoutt High School.

Over the next five weeks two further waves of volunteers were deployed to the BVI, tasked with conducting numerous duties, all the while maintaining a focus on education. From window repairs at Althea Scatcliffe Primary School, to the removal of debris and damaged building work at Bregado Flax Educational Centre, and roof repairs at Jost Van Dyke Primary School, the team worked to support the Ministry of Education to enable 3,178 children to return to an educational environment.

“Team Rubicon, you deserve a great round of applause. You deserve two thumbs up. You guys came in, and you worked, you helped us to clean up, you encouraged us. You gave us hope without realising it. You did it quietly. I would love to thank you on behalf of the principal, the entire Virgin Gorda community. I love you. Thanks.” Barbara Stevens-De Freitas, Bregado Flax Educational Centre.

Team Rubicon volunteers also erected 19 UNICEF tents as temporary classrooms, serving approximately 760 beneficiaries, and repaired and replaced a further three tents in two sites following tropical storm damage, all in order meet the goal of returning all children to education by 6 November, two months after Hurricane Irma first made landfall in the Caribbean.

“The schools could not have been re-opened without Team Rubicon… because they did most of the initial repairs. Team Rubicon being able to adapt and step up when needed was key.” Laura Ivey, Country Lead, UNICEF.

Today, at the time of writing, there is still much to be done to repair and rebuild the islands’ infrastructure and provide more permanent educational settings. However, the rapid return to a level of normality facilitated by Team Rubicon and our collaboration with a magnitude of in-country partners has helped improve the well-being of teachers, pupils and parents alike.

“I can happily report that the children are back in school and they’re learning and they’re happy. Staff are happy. Parents are happy. We are just happy to be back at school and it’s only left to me to say thank you to Team Rubicon, Serve On and all the other groups that contributed us getting to this point.” Kimberley George, Principal, Bregado Flax Educational Centre, Primary Division.

Team Rubicon will return to the Caribbean in March 2018 to carry out the next phase of vital work. From training and equipping local volunteers to prepare and manage a community-level response to disasters, to supporting on the effects of climate change and building resilience and sustainability for schools and clinics, much remains to be done. 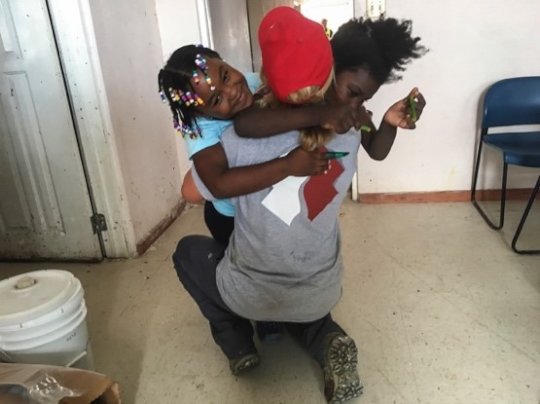 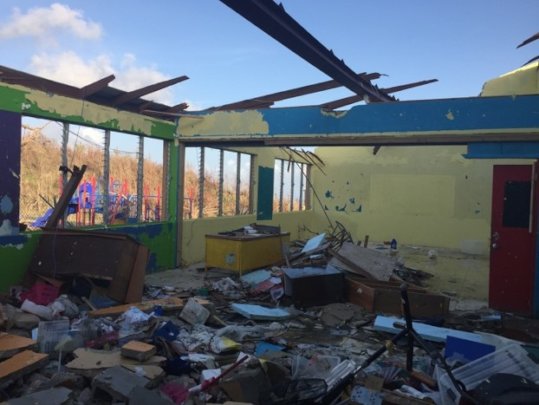 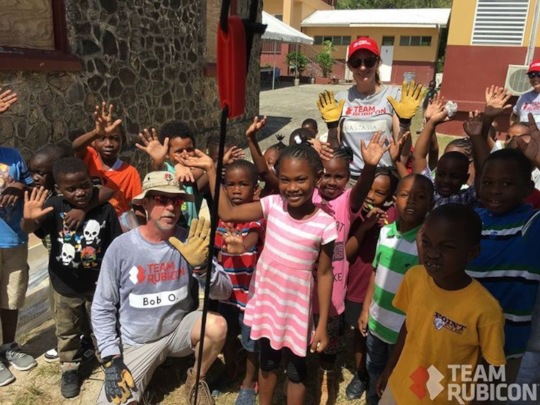 To all of our supporters and donors,

This quick update is really to thank you all for your overwelming support to date of our disaster response efforts in the Caribbean region. In particular the work done by our volunters in the British Virgin Islands. Most rewarding has been the work done to repair schools in order that the education of the children on the islands has not been interupted. The provision of and access to education in the aftermath of natural disasters is crtitcal to not only the recovery effort but also to build sustainable growth and resilience in communities. Your support has enabled us to make a menaingful impact.

We have recognised that sustained engagment with those communites is so very important to the long term recovery of the region. So just to keep you all informed - we are now looking at building out programs into 2018 for continued partnership with the communites of the Islands.

And to our American supporters, their friends and family - we wish you all the very best for Thanksgiving. At Team Rubicon we are so very thankful for your support, compassion and desire to help those most indeed.