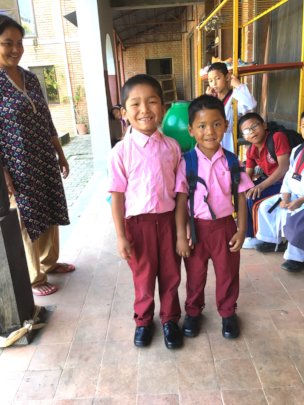 Just a few weeks ago, we welcomed two new Ama Ghar brothers into our family. Kushal, age six, and Sushan, age four, lost their house and most of their family in the 2015 earthquakes.

Since then, they have been shuttled around to members of their extended family, none of whom are able to care for them. This happens often in Nepal, one of the world's poorest countries, because no matter how well-intentioned and loving their extended families might be, there's not always enough food to feed two hungry little boys.

We are so pleased to have these boys - they have had their initial medical checkups and are quite healthy - they just need nutritious food, an education... and most of all, love. They arrived a bit nervous about what their future might bring in this strange new place, as all the children do. But now, two weeks later, they are walking off to school with the rest of their Ama Ghar brothers and sisters, secure in the fact that they have a safe place and a family to come home to.

Generous donors like you are what makes this possible - without you, there would be no warm and loving housemother to make them feel at home, no doctor to care for them and no comfortable bed for them at night. And especially important is the fact that without you, these boys might have been separated and sent to different homes instead of holding hands and walking to school together.

Thank you from the bottom of our hearts for your support of our mission. 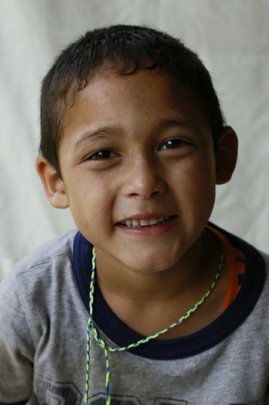 As a member of our donor family, you know that children come to Ama Ghar for many reasons - natural disasters like earthquakes and floods, drug and alcohol abuse on the part of parents, extreme poverty, malnutrition - but one of the saddest of reasons is child trafficking. According to The Times of India, child trafficking over the Nepal-India border has risen 500% between 2013 and 2017. Children are lured from their parents with promises of a better life, then often sold into slavery to work in factories, or, in the case of young girls, sold into brothels.

Akshar was trafficked to India at the age of five and was working in a factory there until he was seven. At that point he was rescued by an anti-trafficking organization and sent to Ama Ghar by Nepal's child welfare authorities. When he arrived, he didn't remember his family or where he is from.

This type of experience can be incredibly traumatic and scarring, but it seems to have turned Akshar into a very keen observer of everything around him. He is very astute about people and situations - to a degree far beyond his age. He has been taken under the wings of his brothers and now enjoys playing games in the field before school, swinging from our Nepali "ping" (a bamboo swing) and participating in music and dance.

Remarkably, this bright little boy has maintained his sunny nature - he is always the first to run to Bonnie Auntie for a hug when he gets home from school. He was very excited to start school and is doing very well, especially considering that he had to catch up with the rest of his class - he had never received any schooling prior to his arrival here. Now he is learning to read in both Nepali and English, and he is learning to speak English so that he can communicate with the visitors whose company he enjoys.

Because he now receives excellent health care, a good education, nutritious meals and the love of his family, Akshar will have the opportunity to make a productive life for himself. Our commitment is that all of our children will be educated to the highest level of their ability, either through higher education or vocational training and that some day he will be able to be a self-supporting citizen of Nepal.

Thank you for your commitment to helping us make that happen. 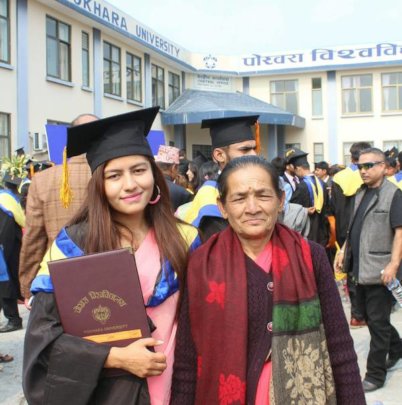 Over and over again we learn lessons about the importance of education for our children. And as studies have proven, education for girls and young women is particularly powerful. According to UNESCO, "... a single year of primary education has shown to increase a girl's wages later in life by 20 percent. When 10 percent more women attend school, the GDP of the country increases by three percent on average. When women are provided with equal rights and equal access to education, they go on to participate in business and economic activity, increasing earning power and combating poverty."

Those are the statistics - but more important to us is the fact that every day at Ama Ghar we see the change in the faces of our young women as they earn a college degree and achieve their dreams of a bright future.

This is Laxmi's story.

Laxmi came to us as a young girl whose family could not afford to feed her, but from the moment she arrived we knew she was a bright and talented person. She studied extremely hard, even when others were playing or taking time away from schoolwork, and she was always committed to her future.

Through the generosity of our donors and the determination and support of our staff, Laxmi passed her school exams with flying colors and was admitted to Pokhara University, where she studied for a Bachelor's in Public Health. It was difficult to be away from her Ama Ghar brothers and sisters and sometimes she was very lonely, but she met new friends and was able to spend time with her sister Krishna, who was taking a certificate at another school in Pokhara.

She persevered - and the result was a very happy day in February, when she graduated with her degree in Public Health, and her Ama was able to join her for the ceremony. Laxmi is committed to helping others in Nepal by providing health care for those still living in poverty in remote areas, and she is a shining example of the value of our commitment to education.