By Orsolya Biro and Nell Calthrop - Volunteer Coordinator and Volunteer 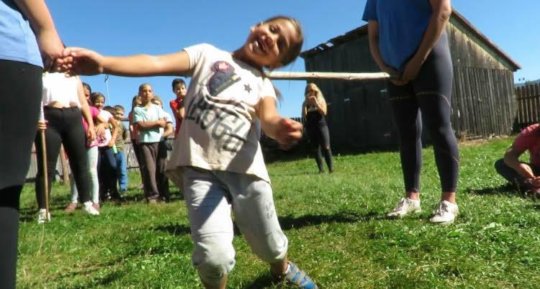 After months and months of quarantine and restrictions, Care2Travel was able to organize 5 camps at the end of the summer vacation. Our very last camp and the highlight of the summer was our camp for the children in Csikszentdomokos village and the kids at the Szent Ferenc After School Club for Disadvantaged Children. In Hargita the majority of after school clubs are run by the Saint Franciscan Foundation and are located in small villages around the county. These clubs offer shelter and 1 hot meal for school kids from disadvantaged backgrounds after they finish school. There is usually 1 carer who prepares the food and helps the children with their homework and studies. Children are usually aged between 7-15 years old (1st to 8th grade). The children that attend this club are from disadvantaged backgrounds. Alcoholism is often the main problem as is a lack of education in the parents and also single-parent families with 1 parent often working abroad. The children can be mischievous but this is mainly because they do not receive much discipline and attention at home. Ultimately they are just like any child that when given attention and praise they thrive.

In this camp 4 international volunteers, Joy and Meggie from Germany, and Maude and Nell from Belgium worked together with 4 local volunteers to develop and facilitate exiting and fun activities for the children. We sincerely hope that we thought them more than just English.

We taught them teamwork by separating the big group of kids into smaller teams, then letting them choose a team name and making a group flag. We gave them responsibilities by letting them take the flag home and insuring they bring it back to the camp the next day.

Most days we started with a fun warm-up that ended with a fitness challenge. After that, we had an English writing quiz that had words that they learned from the previous day. The quizzes were scored in a way that was fair towards all kids, so spelling mistakes didn’t count, the word just had to be recognizable. We also taught them fair play by making sure each team had an equal chance of winning at the end of the week.

That being said we also taught them kindness by giving all the kids prizes at the end of the week. However, all we can really wish that we taught them is how to have fun and in doing so, they can learn so much more. 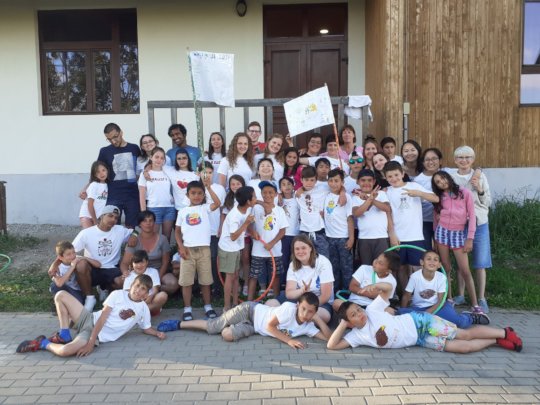 Hanna at our camp in Csaracso

Everybody is aware of the difficult times that have been with us for half a year already. We at Care2Travel have felt them too: we didn’t receive any international volunteers for months and had to cut the summer camps that we provide for local disadvantaged youth short, due to the lack of volunteers and to the government restrictions imposed on us. We could tell you how the lack of our services affects the community we serve, but this time we thought we’d give the word to one of our local volunteers who is very involved with us and with the community: Hanna.

At 20 years old, she has profited from the summer camps we provide since she was a child and has decided to become a local volunteer with us at the age of 17. She, like a lot of the children assisting our summer camps, has had a very tough childhood, but let’s let her tell you all about it herself.

One thing to note about the interview is that, despite having an excellent level of English for a local from Csíkszereda, we had to complete some of the sentences with additional words in brackets, so that everything is perfectly understandable. This way, you can see exactly what it is that she said and what has been added to communicate what she said better. This interview has been conducted by our international NGO Support volunteer (one of our firsts after the start of the pandemic), Marc Bosch, who was also trying to figure out what Care2Travel really meant for the community and why it’s so important to preserve its activities.

Marc: “How/why did you start going to the [Care2Travel summer] camps?”

Hanna: “When I was at the childcare I started to go [to] the camps. I was 10-11. I [met] Peter, Jackie [the founders of Care2Travel] … I like[ed] it really much. I like[ed] it because it was a [good time], but when I was at the child-protection I [didn’t] really like that time, because it was horrible for me. But when I [became a] volunteer I liked [it] really much.”

H: “Yeah, it was another thing with the other children, the summer camps [were] really good. I was happy when I [became a] volunteer [as well].”

M: “How many years did you go to the summer camps?”

M: “Why did you want to become a volunteer?”

M: “Do you think that is because you had so much fun at these camps that you wanted to help other kids?”

H: “Yeah, and I want to help them because I know how their situation [is].”

M: “So you think that these summer camps are really helpful and they mean a lot to these kids?”

H: “Yeah. And they love us [the volunteers] very much. All the time [when] the camps ended, the children [were] crying, they [were] hugging us; the local [volunteers and] also the internationals.”

M: “Do you remember a specific story about a kid? Because I’m guessing there are more kids from childcare. Have you met some of these kids?”

H: “Yeah. I met with a lot of [them]. I can’t say one [child specifically]. I think I can say for all the children. They love us. And they need that love [that] we give [to] them, because their situation [is] really difficult. Some of them didn’t have [a] family or something, and they don’t really [know how to] express themselves [and] what they want in life. These camps are really helpful for them because we can [prepare] them for life. Not only for life, but we can help them and they can get good experiences from us. [In] the child-protection, they don’t really give good things there. It’s difficult.”

M: “These summer camps are only one-week long right?”

M: “And do you think one week is enough? Do you think it’s powerful enough?”

H. “Yeah, they like [them]. If [the camps] are once [held] for [a] longer time, I [also] think they would like [them] more. But I think one week is good. It’s bad when they have to say goodbye, because they don’t like the goodbyes: they are [always] crying.”

M: “And what do you want to do now? What’s your objective?”

H: “I want to go to England, but because of the Brexit I can’t. They only had 4 opportunities and they [already] start[ed]. Maybe I’ll choose Ireland or something like that close to England.”

M: “Your English is good! Where did you learn it?”

H: “At school a little bit, but after that at the camps and the English clubs [Care2Travel provides for the community].”

M: “Are the English clubs only for volunteers?”

M: “Do you think that a lot of people know Care2Travel here?”

H: “Yeah, they know. Also I’m [spreading the word] for them. Inviting [locals] to come to the English clubs. Some of my classmates, one boy and one girl, [were] coming [to] the English club. They know [as well] because C2T went to the schools. They also went to the Romanian high school I studied at.”

M: “I like that. It’s not only for the kids and the volunteers, it’s for everyone. Because if the kids have a good experience and grow, and they end up being part of the community, it enriches everybody. Plus, their parents are also glad that they’re having these experiences, which helps the community right away. Those kids grow up and they want to be like you, they want to volunteer…”

H: “I know [a] few of [the kids] from the child-protection who want to come volunteer. They are only 12 years [old].”

H: “I don’t know. Maybe they´ll need to search for other help. They need [this help]. And C2T is the [only] organization [that] is here in Csíkszereda.”

Now that the importance of the work that Care2Travel does is fully understood with the brilliant testimony of Hanna, we want to announce that we want to make up for the summer camps that we weren’t able to organize this year. We believe that it’s important that these kids continue receiving the support that these camps mean to them and we will not let a year go by without giving it to them. Our plan is to organize after-school camps during this school year, and we need all the support that is available to make that happen. What we’d need for these camps would be educational and learning equipment, some rewards for the kids who try their best, and the ability to host those camps in a paid venue, to give a few specific examples of many.

The light at the end of the tunnel 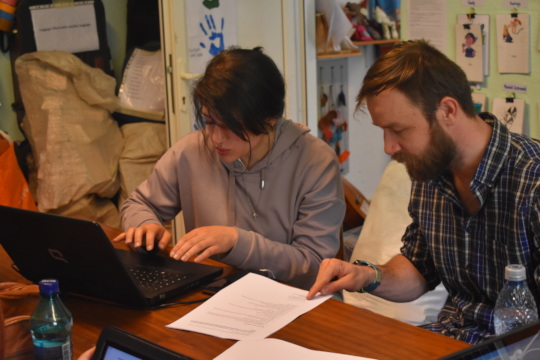 Work in the office

At this time of the year, when the pandemic is about to retreat we are hoping that we'll be able to continue what we've started. For more than 3 months it was not allowed to go out from the house or to organize any meetings. We were using the possibilities given by video chats to keep the contact and continue our work, but it's really difficult to sustain the efficiency.

A the moment it looks like we can see the light at the end of the tunnel. The govermnent of Romania is about to vote on the new legislation that makes possible for no more than 20 people to meet. This means that we can start organizing our camps for Roma children and hope that this number will raise soon. If not, we are still able to organize two smaller camps instead of a bigeer one.

There are still some issues though. In all our camps we provide foreign, English speaking volunteer for the children to interact as this will raise their interest in English language and will widen their social network along with many other benefits. We are facing the difficulty of recruiting foreign volunteers at the moment. As the 2 weeks of self-quarantaine of newly arrived foreigners is still applicable, it's really hard to host volunteers from other countries.

It is also difficult that we have to make compromises regarding the location with the school that provides us the space for the summer camp. It is really difficult for schools at the moment as they have to allign with the decisions of the government which is sometimes not very detailed and it might attract a fine for the facility if all requirements are not met.

Also local volunteers are still a bit concerned about taking part of a larger gatherings considering the fact that as per the media, the virus haven't disapperared yet, only started to weaken a bit.

The lack of work and the cancelled funds we were promised are also making our life harder and if we won't be able to get out of this pandemic situation, we'll be struggling soon financially.

We'll continue the work anyhow and hope that we'll be able to succeed and recruit enough foreign and local volunteers to cater for the kids as we've always done in the past years. The impact is great and the need is high.

We say thank you for all our donors and we believe we'll be able to utilize the help of your support.

If all goes well, we'll be able to come up with some more uplifting news in a short time.