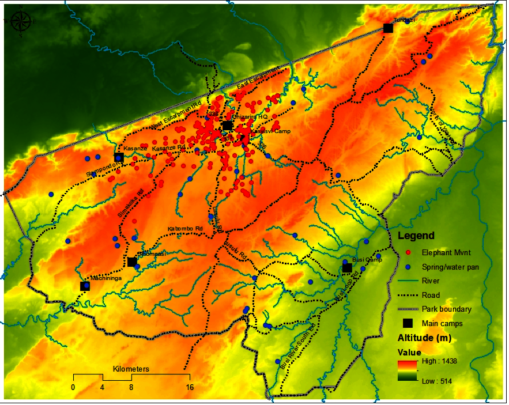 The elephant research initiated by ALERT with Zimbabwe Parks and Wildlife Management as a partner is the first elephant collared in the Sebungwe region this century. The elephant cow named “Nyasha” is part of a herd of 30 animals and the data being collected on her movements, core areas and feeding preferences are tied in with the objectives of the Zimbabwe Elephant Management Plan 2015-2021.

Nyasha has been actively tracked via VHF and GPS over the past two months. The research on this herd has already yielded interesting preliminary data such as home ranges, population dynamics and habitat use, but much more data is needed before the status and condition of the elephant population is known. As can be seen, by the map, Nyasha is utilizing the mid-northern part of the park. With more collars, we will be able to obtain meaningful data of the elephant populations within the whole Park and will be in a position to advise the Parks Authority on conservation measures.

This herd of elephants has not gone out of the Park into the surrounding communal lands to date. Part of the research is to establish the occurrence of any Human elephant conflict incidences outside of the Protected Area and to define traditional elephant migratory corridors 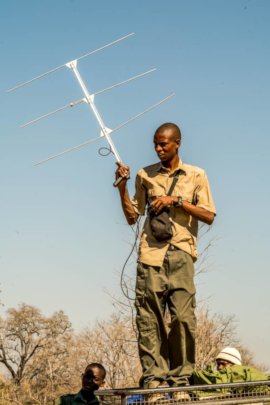 We would like to thank our donors for their extremely generous donations over the past few months. The donations received have helped make a massive difference and contribution towards improving the education of several young scholars in the area. These donations help us achieve our goal of purchasing learning materials such as exercise books, writing and colouring materials, this will give the students the chance to expand their knowledge effectively and give them the chance and ability to take class notes home with them on subjects such as Math, English, Geography and Conservation to name a few.

The received GlobalGiving funds will be used to pay fees, provide stationery and uniforms for 17 kids (10girls and 7 boys) across the three schools we are working with. The students will each receive a stationery supply of 16 writing books, 8 pens, a ruler, 1 sellotape, 3 rolls of khaki cover and 3 rolls of plastic cover to last the school term. The students will receive a complete set of school uniform a dress (girls), shirt and shorts (boys), a pair of school shoes, a backpack and 2 pairs of socks each. For some of our students, it will be their first time getting a full set of uniforms at once. All the supplies will be distributed on the 10th of September when schools open for term 3.

Since it is currently school holidays, we are not able to take any photographs but we can assure you, that the pictures will arrive soon after term 3 begins.

We would like to thank our donors immensely for their generous donations and we look forward to future engagements.

Thank you from the ALERT team.

Some of our lit homesteads had lions visiting them but experienced no attacks at the cattle kraals. Only one of the lit homesteads had their pig killed by lions at night. This is possible because their pigsty does not have any lights and is further away from the lit kraal. The lions also avoided using the route which goes close to the kraal hence no images were obtained from our camera trap.  3 cattle and 8 goats which are part of the above records were lost during the night in Masikili village.

The loss occurred in the section of the village where no single homestead has lights installed on any of the kraals. In terms of diversity of predators’ woodlands village seemed to have suffered the most. The village members lost one cattle to a clan of hyenas at dawn when they were being taken back to the kraal. They also lost two dogs to a leopard. The remaining 4 cattle which were recorded occurred in the rangeland during the daytime when cattle were left to free-range and were caused by lions.

So we would like to thank our donors for their support and help, the money raised recently;y in the Little by Little campaign will help ALERT expand this project. We can now fully light up another homestead and that is thanks to you, so thank you we look forward to taking this project further with you alongsie us.