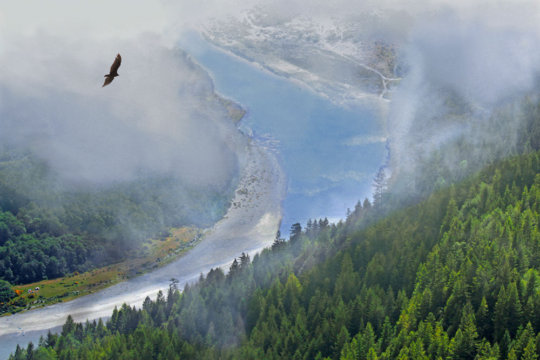 Almost There! WRC Makes Final Purchase to Save Blue Creek

In northern California, Western Rivers Conservancy has purchased the final 8,582 acres in our effort to forever protect Blue Creek, the lifeline of the Klamath River. This extraordinary step puts us within striking distance of completing the Blue Creek Salmon Sanctuary and Yurok Tribal Community Forest, a 73 square-mile preserve in the heart of redwood country. WRC is now working to convey the land to the Yurok people for permanent conservation.

The centerpiece of this historic effort is Blue Creek, the most important cold-water tributary to the Klamath River. Nearly all salmon and steelhead that return to the Klamath River hold at Blue Creek, lowering their body temperature enough to survive the journey inland to spawn. The Klamath is getting progressively warmer, and the refuge that Blue Creek provides is crucial, especially for summer and fall-run fish that return when the river can be lethally warm.

The Klamath River is the third largest salmon stream on the West Coast. Without Blue Creek and the cold water it provides, the Klamath’s salmon runs would likely perish. Given the stream’s importance, WRC has been working in partnership with the Yurok people and Green Diamond Resource Company, the former owner of the lower Blue Creek watershed, to conserve 47,000 acres of temperate rainforest by returning it to the Yurok, who will manage the lands for the sake of fish and wildlife. Blue Creek is the crown jewel of the Yurok spiritual homeland, and the Tribe shares WRC’s conservation vision for Blue Creek and the Klamath River.

Once WRC conveys the land to the Yurok, Blue Creek will be conserved in its entirety. From its forested headwaters, which are already protected within the Siskiyou Wilderness, to its confluence with the Klamath River, Blue Creek will be a sanctuary for the incredible fish and wildlife that define this remote and wild stretch of the western United States. The final steps are underway, and with your continued support, we will make it happen.

Western Rivers Conservancy protected another 120 acres of fish and wildlife habitat along Oregon’s Sandy River last month. With the completion of this project, WRC has now conserved over 4,500 acres along the Sandy and its tributaries, helping ensure that Portland’s backyard river stays healthy for generations to come.

The project protected nearly half a mile of Little Joe Creek, an important salmon and steelhead-bearing tributary to the Sandy River. The Sandy’s imperiled runs of winter steelhead, coho salmon and fall and spring Chinook are all listed under the Endangered Species Act. WRC’s efforts throughout the basin, including our work on Little Joe Creek, are conserving prime habitat for all of these fish.

Our efforts at Little Joe Creek also linked an existing county park with protected BLM lands, and will help the BLM expand its Sandy Ridge Trail System. Created in 2010, Sandy Ridge has become one of the country’s top mountain bike destinations.

WRC began its work on the Sandy River in 1999, when it partnered with Portland General Electric at the outset of the utility’s dam removals on the Sandy and Little Sandy Rivers. With the dams coming out, WRC committed to conserving 4,500 acres of prime riverland habitat in partnership with PGE. Since then, we have created an unprecedented conservation and recreation corridor on this outstanding glacial river, just 25 miles from downtown Portland. Much of the land we acquired from PGE is now managed by the BLM within a designated Area of Critical Environmental Concern.

Although WRC has met its original goal of conserving 4,500 acres along the Sandy, we continue to seek out high-quality riverlands, where acquisition will allow us to protect more habitat for Oregon’s fish and wildlife. Whether you’re a bike ride or a full day day’s drive from the Sandy, we hope you’ll cheer this success. An important property along a remarkable western river has been conserved forever.

Beneath the snowcapped peaks of Idaho’s Sawtooth Mountains, Western Rivers Conservancy has successfully conserved a mile of Pole Creek, one of the most important salmon spawning streams in the upper Salmon River basin.

Originating from sedimentary geology in the White Cloud range, Pole Creek carries a relatively high nutrient load that sustains diverse insect life and excellent riparian habitat. The result is outstanding spawning and rearing habitat for salmon, steelhead and bull trout in the headwaters of one of the greatest rivers in the West.

Knowing the importance of the stream, WRC set out to conserve this prime reach and bolster conservation efforts that have been underway for years. Pole Creek has been the focus of extensive restoration work by local and national nonprofits, local landowners and state and federal agencies. Millions of dollars have been invested in the stream to remove culverts, improve fish passage and increase flows during peak irrigation season, all with the intention of returning this exceptional stream to optimum health.

WRC contributed a critical piece of the puzzle by purchasing a 619-acre property along a mile of the creek and conveying it to the Sawtooth National Forest. The Forest Service has committed to restoring this stretch of the creek and will manage it for the sake of the Salmon River’s fish and wildlife, especially the recovery of imperiled salmon, steelhead and bull trout. Our efforts will eliminate future grazing in the stream’s sensitive riparian areas and prevent development along this key reach of the creek. The project also protects a short reach of the mainstem Salmon River itself.

WRC has long been drawn to the “River of No Return,” which flows through the largest wilderness areas in the Lower 48. The Salmon plays host to one of the greatest fish migrations on earth, a journey of more than 900 miles from the Pacific to the Rocky Mountains. It is also one of the great river destinations of the West, with unparalleled boating, fishing, hiking, hunting and wildlife watching.

When viewed on the scale of the Salmon and Snake River basins as a whole, Pole Creek is but a tiny stream winding through the Sawtooth Valley, high in the system. But given its immense importance to the Salmon and Snake’s runs of anadromous fish, the impact of our efforts—and the support you provided to help us get the job done—will be far-reaching and permanent.

The Sandy River and the Salmon River/Pole Creek Projects are two of our recent successes. WRC currently has two dozen active projects in six states. With the support of GlobalGiving donors, Western Rivers Conservancy is expanding our efforts to protect riverlands for fish, wildlife and people.

The project area is a small but critical cap on a much larger effort to restore Fossil Creek after it was dewatered by a hydroelectric project for nearly a century. Beginning in 1999, state and federal agencies and restoration groups embarked on what would become the largest river restoration effort in the Southwest. Since then, Fossil Creek has returned to the exquisite stream it once was, a delicate ribbon of crystal-clear, aquamarine mineral water flowing through the parched landscape of the Sonoran Desert.

Descending from a series of mineral springs in the Mogollon Rim, Fossil Creek hovers around 70 degrees Fahrenheit year round. The river’s high calcium content creates surreal limestone formations and the beautiful blue-green travertine pools for which the stream is known. An oasis in every sense of the word, Fossil Creek is a true haven for fish and wildlife. Nine species of imperiled native warm-water fish inhabit the stream, and river otters, bats, frogs, beavers and a plethora of bird species all rely on its life-giving waters.

People have also come to rely on Fossil Creek. It offers cool respite from the desert heat and has become a popular destination for swimmers, sunbathers, hikers, bird watchers and anglers. The lands that WRC is conveying to the U.S. Forest Service will be crucial in helping the agency manage recreation and reduce human impact on this sensitive desert ecosystem.

Over 100 years in the making, Punchbowl Falls Park, on Oregon’s Hood River, finally opened to the public this summer when Western Rivers Conservancy conveyed 102 acres of riverland to Hood River County. WRC and the county created the park to protect Punchbowl Falls and the confluence of the East and West Forks of the Hood River and to ensure public access to this scenic stretch of the Hood.

The Hood River is a rare Columbia Basin stream, with more anadromous and native fish species than any other river in the basin. With headwaters flowing from the shaded north-facing glaciers of Mount Hood, the river is ice-cold and, in the face of climate change, a critical cold-water refuge for salmonids.

WRC began purchasing property along the Hood more than a decade ago and held the lands while raising the funds needed to convey them to the county. The final piece fell into place last year, when Oregon Parks and Recreation Department awarded a $470,000 grant to the county. Thanks to support from The Collins Foundation, M.J. Murdock Charitable Trust, the Pacific Power Foundation and others, WRC was able to donate half of the property value. The remainder was raised by Hood River County, the Hood River Valley Parks and Recreation District and local individuals.

Today, the park is open to all, and this important stretch of the Hood River will be forever managed for the Hood River’s cold water, unique fish and wildlife and outstanding recreation.

Fossil Creek and the Hood River are two of our recent successes. WRC currently has two dozen active projects in six states. With the support of GlobalGiving donors, Western Rivers Conservancy is expanding our efforts to protect riverlands for fish, wildlife and people.

Attachments:
‹ 1 ... 3 4 5 6 7 8 9 10 ... 15 ›
WARNING: Javascript is currently disabled or is not available in your browser. GlobalGiving makes extensive use of Javascript and will not function properly with Javascript disabled. Please enable Javascript and refresh this page.