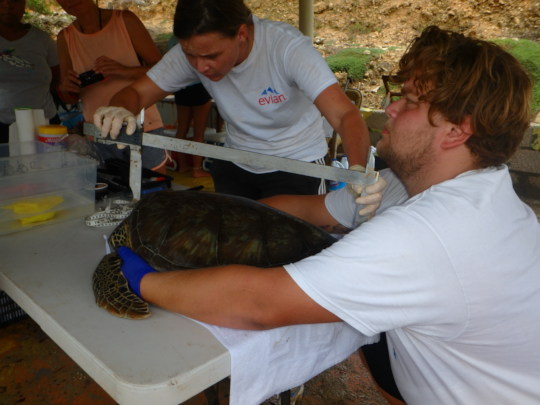 Thanks to a partnership with Artemis, local veterinaries and a group of amazing volunteers we were able to conduct 2  capture and release sessions in 2018.

In January we found a large portion of sea turtles with tumor growth in some of the inlets along the noth shore. Based on the results and advises of internationally acknowledged scientists we asked permission for extra survey sessions in 2018 to gather more data to assess the severity of the infection on our sea turtle populations.

From October - November 2018 extra catch and release sessions were conducted. A new custom made net was made in Cartagena, Colombia. Safety protocols were upgraded and a collaboration was also formed with Artemis.

Total amount of turtles checked in the catch and release survey in 2018 were 167. Of these 68 were caught in January and 99 in Oktober and November.

The data collected gives us a better insight into our populations and their conditions. 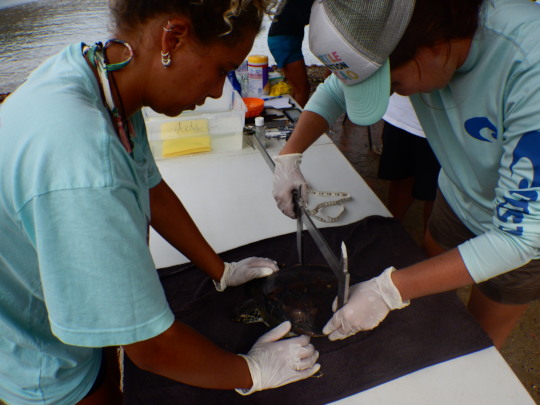 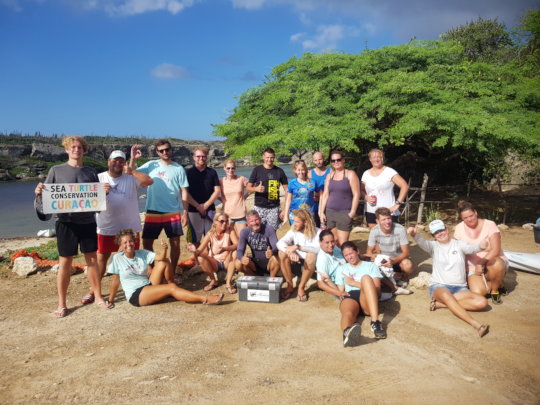 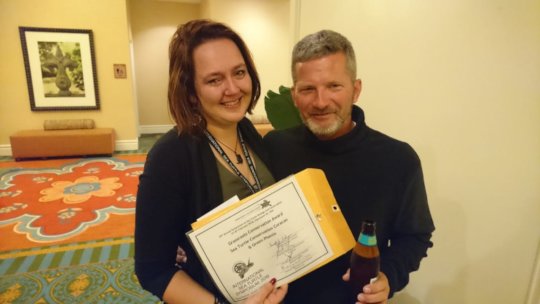 Overwhelmed after receiving the GCA

Last week Sabine Berendse and Ard Vreugdenhil represented Sea Turtle Conservation Curacao during the 39th International Sea Turtle Symposium in Charleston. They participated in 6 workshops, presented in 3, showed the music video “Can you see” which was made at the beginning of 2018 and was a collaborative project with a dozen local artists. Sabine Berendse also presented in the “Future of Conservation” session.

The presentation in the “Future of Conservation” session about ‘effective conservation through collaboration with precious plastic initiatives’ was candidate for the Grassroots Conservation Award (GCA). The criteria is that the presentation demonstrates a positive contribution by a grassroots group or individual towards conservation of marine turtles and their habitats.

In her presentation Sabine showed that a collaborative approach with the Precious Plastic community, which counts 40K members worldwide, can make huge global impact on reducing plastic pollution by taking local action in repurposing post- consumer plastic. Reducing waste stream output by stimulating circular economy systems can prevent plastic from ending up in the ocean. She showed several product possibilities and for her presentation she wore a meaningful dress from label dresscode010, which is made out of 17 recycled PET bottles.

The founding of Green Phenix as a social enterprise was explained and partners like LIMPI, Green Force, 2ndlife Curacao, Dresscode010 and BA3d printing were recognized.

During the award ceremony the grassroots conservation award was the last award that was announced, following the lifetime awards in which several conservation heroes were recognized, like Jeffrey Miller, Rod Mast and Wallace J Nichols. Obviously the results of STCC would not have been possible without the amazing support of the fantastic volunteers and partners, so the award was dedicated to them. Receiving the Grassroots Conservation Award is a huge honor! 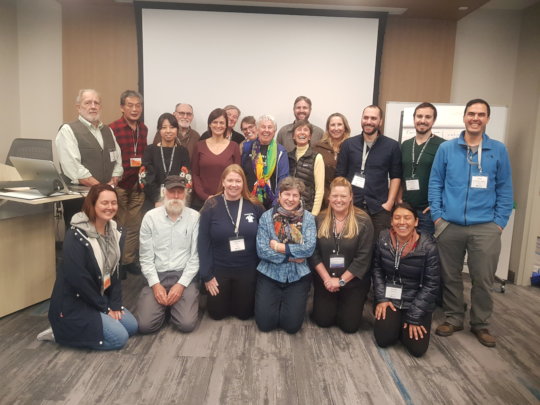 Does what we doe matter 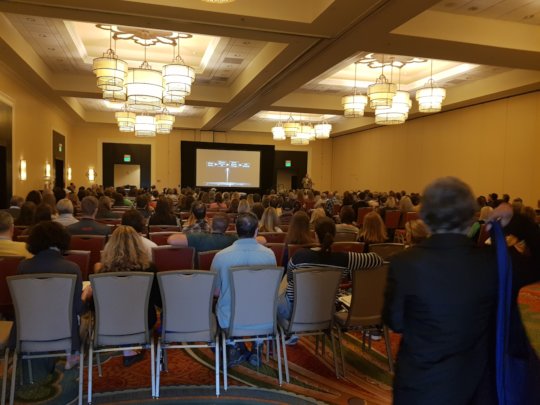 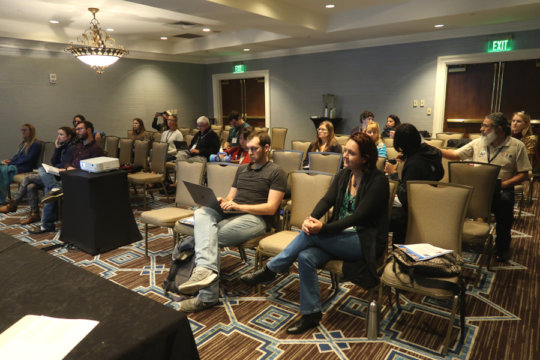 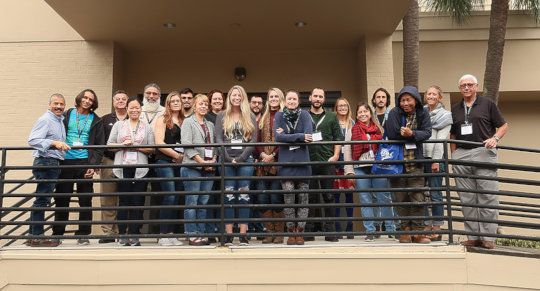 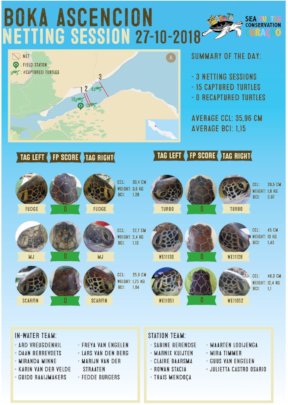 After collevcting the necessary materials we were able to conduct 5 netting days in the last couple of months. On each day we did a minimum of 3 netting sessions of 1 hour. These netting sessions give us a lot of information about the sea turtle populations living in our north shore inlets. We do general health checks, measuring their carapace lenght, width and their weight.

Due to the risk of FP we have to work very secure.Each measuring station is cleaned 3 times before a new turtle is placed om it. Each day we have 2 measuring stations, which are manned by 4 people each. In the water there is a special team of 10 people.

We have 3 more netting days planned in 2018. It would be good to compare the different inlets. Obviously we need to repeat this research to annalyse trends. 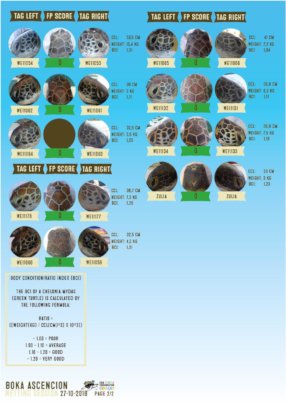 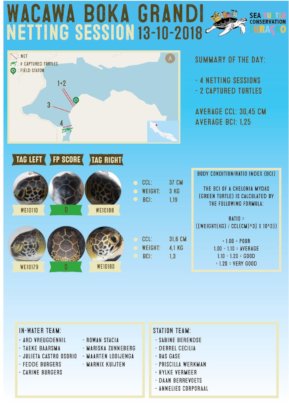 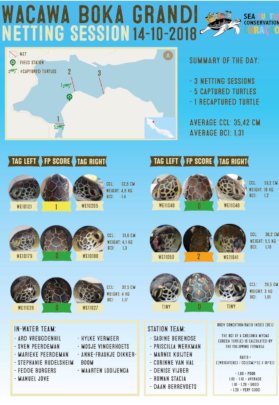 Boka Grandi Day 2
‹ 1 2 3 4 5 6 7 8 ›
WARNING: Javascript is currently disabled or is not available in your browser. GlobalGiving makes extensive use of Javascript and will not function properly with Javascript disabled. Please enable Javascript and refresh this page.