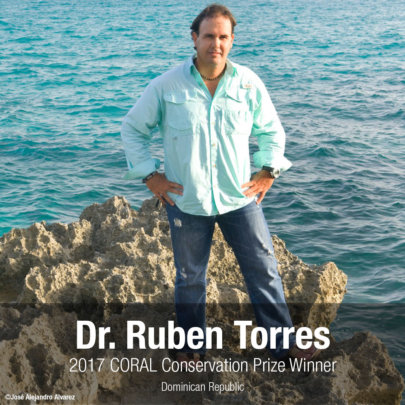 Since 2014, CORAL has awarded the CORAL Conservation Prize to an extraordinary leader within the coral reef conservation community; we are pleased to introduce Dr. Ruben Torres as our 2017 Prize winner.

“The CORAL Conservation Prize is a unique opportunity to recognize leaders in coral reef conservation who embody CORAL’s mission to unite communities to save coral reef,” said Dr. Michael Webster, Executive Director at CORAL. “This year, we will celebrate Dr. Ruben Torres, for his passion, commitment to partnerships and proven success protecting and saving coral reefs in the Dominican Republic.”

Over the past 20 years, Dr. Ruben Torres has emerged as a leader in protecting coral reefs by partnering with local fishermen, hotels, students and volunteers. He has brought coral reef conservation and awareness to a new level in the Dominican Republic by managing marine protected areas, promoting sustainable seafood and contributing to new national conservation policies.

Ruben has a Ph.D. in Marine Biology from the University of Miami and B.S. in Biology from the Autonomous University of Santo Domingo. He is currently the Caribbean Regional Coordinator for Reef Check International and founder and President of Reef Check Dominican Republic. His other activities include founder and CEO of Torres Environmental Consulting (TEC UNLIMITED), a member of the International Coral Reef Initiative (ICRI) Lionfish Committee as well as the Global Coral Reef Monitoring Network. Rubens is also a mentor for the Caribbean Marine Protected Area Managers Network of the United Nations Environmental Programme and a certified PADI SCUBA diving and Emergency First Response Instructor.

Ruben’s passion for community leadership in coral reef conservation has helped save coral reefs in the Dominican Republic and serves as an inspiration to ocean lovers and communities who depend on coral reefs.

Inspiration from the Next Generation 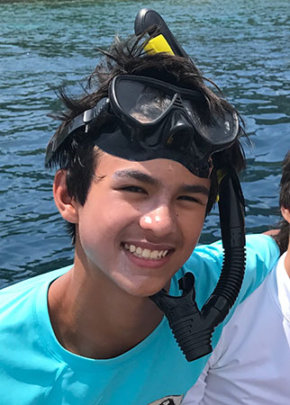 Coral reefs mean different things to different individuals depending on their connection (or lack of connection) to them. For those that are landlocked or have never visited tropical waters, coral reefs probably don’t often come to their mind. However, for individuals like Justin, a seventh grader at Viewpoint School in California, coral reefs and the ocean bring fond memories of sandy beaches, warm water and a sense of belonging.

Recently, we featured a blog post about Justin’s school project when he created beat blox to raised funds for CORAL. This second post will provide more insight into this creative self-described environmentalist who wants to share his love of coral reefs with the world.

Justin’s first memory of the ocean was as a very young child vacationing to Kauai, Hawai`i with his family. While there paddling on a boogie board with his good friend, he saw his first sea turtle in its natural habitat. He remembers the moment vividly because it made him feel like he belonged there experiencing nature and its “diverse ecosystem full of marine life and cool animals.” In addition to boogie boarding, Justin also loves doing activities such as snorkeling where he’s able to “see the beauty of the ocean.”

Like others fortunate enough to visit coral reefs, Justin particularly enjoys and appreciates the “beautiful underwater world” created by corals and the diversity of animals and fish that live on, in and around reefs. His favorite type of coral is the brain coral or Diploria Labyrinthiformis. He’s fond of this coral because it’s long evolutionary history and because “it looks so much like a brain!”

Justin also has a favorite reef fish: the black tip reef shark. He saw his first one while snorkeling in the Philippines off the coast of Palawan. Having held a long fascination with sharks, Justin likes to equate them to the cops of the marine world due to their ability to help maintain the delicate balance between fish populations in marine ecosystems. He also enjoys the Hawaiian triggerfish (Rhinecanthus rectangulus) simply because of its “really cool” name in native Hawaiian: humuhumunukunukuapuaa; I mean, who can blame him!

However, Justin worries about the future of our underwater havens. As Justin likes to put it, “coral reefs support all the life in the ocean in that all of the lives are interconnected in the marine ecosystem. Marine animals depend on coral reefs for protection and habitat. They are important to the ocean ecosystem. Also, coral reefs protect coastlines from storms and waves. Coral reefs are dying because of human carelessness and ignorance. Climate change, dynamite fishing and pollution all disturb the ecosystem — that can’t be good for the animals that live in the ocean or for the human species as a whole.”

As an environmentalist, Justin cares about the positive and negative effects we have on our planet. He wants “to keep nature safe, and coral reefs are such an important part of the ocean.” The future of coral reefs is bright due to young champions like Justin who one day will don the mantle of coral preservation to save coral reefs. 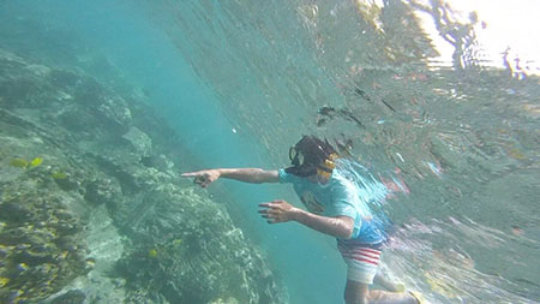 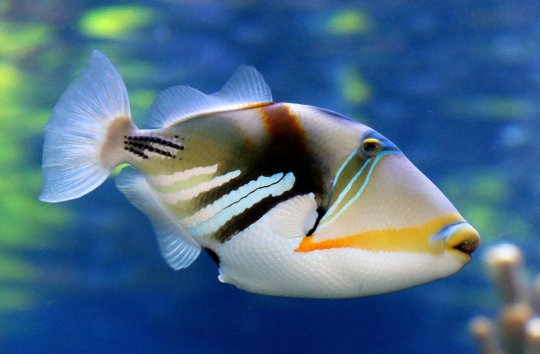 Creating Win-wins for Reefs and People

It’s 2011 and Jenny Myton, CORAL’s Associate Program Director for the Mesoamerican Reef, is diving into the murky waters of Tela Bay, Honduras. Her husband rolls into the water after her and hears Jenny scream. He panics: is she OK? As he swims down to her, he also starts to yell, but they are both yelling in excitement because—astonishingly—the bottom is covered in live coral.

Coral cover has declined across the Caribbean, from near 80 percent in the 1970s to about 18 percent today. Somehow, the corals in Tela have defied that trend: live coral cover is an astounding 69 percent. Now six years later, I have a chance to see these amazing reefs for myself.

My journey to Tela starts with lunch in Miami. No, not that Miami—this is Miami, Honduras: a ragtag collection of wooden houses perched on stilts and crowded onto a narrow strip of sand between the Caribbean Sea and Laguna de Los Micos. This lagoon is an important nursery habitat for many species of reef fish. While Tela’s reefs are amazing for their live coral cover, they have a noticeable lack of fish. This has many worried that the entire local system sits on the edge of an ecological precipice. For these corals to continue to thrive, they need fish—especially herbivorous fish who help control algal growth. However, for the reef to have fish, it needs the lagoon.

This lagoon also provides essential food and income for thirteen communities that ring its shores. These communities and others exert enormous fishing pressure on the lagoon, which means very few fish actually survive to make it to the reef. CORAL has been working in Tela for the last four years to reduce overfishing in a way that doesn’t harm the lagoon’s human communities.

After my lunch in Miami, Jenny and I pile into a boat on the lagoon with some of Tela’s managers. We are on our way to visit one community—Marion—to see how people, the reef and lagoon interact.

My first impression of the lagoon is that it is huge: it takes us forty-five minutes to cross it. Mangroves crowd its shores, their barnacle-clad roots sticking up from water that is bright green and soupy looking. Where the edge is sandy, it is full of birds, including egrets, herons and one pale pink spoonbill. As we near the far shore, there’s a young boy waving at us from a sand bar. He stands next to a tree branch sporting a tattered piece of red fabric, which marks a channel entrance into the forest.

The entrance is so shallow that the boat has to be pushed into the channel. We slide over sand past thick reeds that crowd into the boat from both sides. Once we are afloat again, we motor slowly into the forest. The view of mountains is eclipsed by large trees, and a deep hot hush settles over us. We step from the boat onto a muddy bank and start our kilometer-long walk through the thick heat to Marion.

The first thing I notice when we reach the village is an abandoned house that’s half buried in the sand. Marion sits directly under a levee next to a river. In 2014, the levee burst and the village was quickly inundated. Not everyone survived the flood and those who did lost everything. Marion is a poor community without running water or electricity. Yet, as we walk down the wide sandy track through the middle of the village and past the brightly painted school, the feeling is one of happiness and joy. Kids play in the middle of the town; people stop to talk to us. It’s peaceful here.

We turn left down a small track toward our final destination. We are greeted by decorative palm fronds and balloons. Balloons! Marion is celebrating the opening of a new cooperative store. A $2,300 micro-grant from CORAL has stocked the shelves with bags of flour, rice and beans, pens and Coca Cola. The store’s profit-sharing agreement provides members with an alternative form of income that helps the community endure the fishing closed season and the reductions in catch limits that will be required to rebuild the ecosystem.

The cooperative’s members greet us with smiles and hugs, speeches and more than a few tears of gratitude. Such a small thing for us has made such a big difference for these people. They are still recovering from the flood, and opening this store gives them hope that their community will survive.

The next day, I head out to the reef. Rolling into the water, I experience the same thing Jenny did six years earlier. I too am yelling into my regulator in amazement: there is so much coral! Even now, two months after my visit to Tela, picturing those reefs fills me with hope. In Tela, corals have figured out how to adapt to and thrive in less than ideal conditions. By including this area in CORAL’s Mesoamerican Adaptive Reefscape —a large network of diverse and connected healthy reefs—baby corals from Tela can travel to other locations, taking with them the special genetic material that allowed their parents to thrive in murky waters.

Communities like Marion also give me hope. Earlier this year, Honduras’ first coastal managed-access fishery was passed into law in Tela Bay. This approach to fisheries management ensures that each of Tela’s communities has exclusive access to a portion of the catch. What they don’t fish today will be available to them tomorrow. In conjunction with alternative livelihoods—like the cooperative store in Marion—these communities are able to make decisions to not fish. By including communities in solutions that help save coral reefs, we create win-wins that give everyone hope for the future.

‹ 1 ... 6 7 8 9 10 11 12 13 ... 24 ›
WARNING: Javascript is currently disabled or is not available in your browser. GlobalGiving makes extensive use of Javascript and will not function properly with Javascript disabled. Please enable Javascript and refresh this page.