University of Hawaii – Hilo (UHH) students and alumni test water quality in Puako, Hawaii for the Department of Health

Hawaii Wai Ola is harnessing the power of citizen science to provide a more comprehensive and timely understanding of Hawaii’s water quality, and thus, quality of life.

Citizen science groups are becoming increasingly prevalent across Hawaii, as government and community groups recognize their many benefits. Citizen scientists provide a cost-effective solution for increasing the amount of high-quality rigorous data that researchers are able to collect. Citizen science also increases public awareness and empowers people to make a difference for their island community. CORAL has been proudly leading its own citizen science program on Hawaii Island. In 2017, CORAL began training citizen scientists in Puako to conduct monthly water quality sampling of six sites along the South Kohala shore, as part of a broader plan to monitor the Puako reef before, during, and after the transition away from cesspools to cleaner alternatives (learn more about our Clean Water for Reefs Puako project here). Our citizen science group collects data on metrics like temperature, bacteria (e.g. Enterococcus) and nutrients; information which is critical to understanding ocean health for the benefit of Hawaii’s residents, visitors and ecosystems.

Now, thanks to the establishment of the Hawaii Wai Ola, much-needed water quality monitoring is now expanding across Hawaii Island. Data collected will be provided to the Hawaii State Department of Health (DOH), filling critical gaps in their database. Data will also be made publicly available on the Hawaii Wai Ola website, which we encourage you to explore.

If you’re based in Hawaii, please consider joining the new citizen science team on Hawaii Island or our monthly volunteer program in Maui! 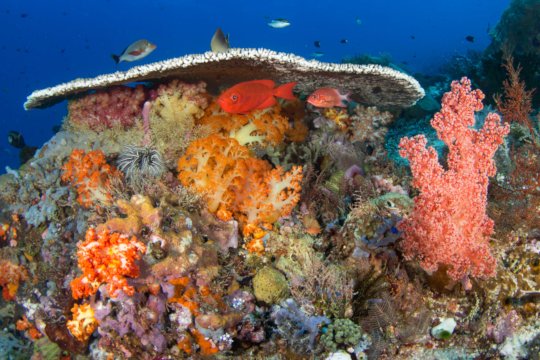 In a pioneering peer-reviewed study, scientists from the Coral Reef Alliance demonstrate that coral reef management that takes evolution and adaptation into account can help rescue coral reefs from the effects of climate change.

The study titled, “Management for network diversity speeds evolutionary adaptation to climate change” is the result of the collaborative Modeling Adaptation Potential (MAP) project to improve the scientific understanding of how coral reefs can adapt in the era of climate change.

"It is well documented that climate change is causing corals to die off at an unprecedented rate, but our study provides tools that offer promise for their survival. Our results show that when evolution is enabled, conservation efforts can help corals adapt to rising temperatures.” -Dr. Madhavi Colton, co-author and Program Director at the Coral Reef Alliance.

The study found that the likelihood of successful adaptation increases if local threats to reefs are reduced through effective management. Effectively managing reefs includes protecting them from overfishing and water pollution, which improves local conditions for corals. Managed areas serve as sources of repopulation over the long term–corals in managed areas rescue the rest of the reef.

Importantly, the diversity-based conservation strategies performed well under a variety of assumptions and future conditions. This demonstrates that we know enough of the science to act now to establish spatial management networks that include a diversity of reef types and habitats. With the effects of climate change only increasing, we have little time to waste.

Why it is Important:

Conservation planners can facilitate adaptation even in the face of ongoing and unpredictable change by prioritizing diversity in coral traits and habitats. Our models suggest that this is the best chance of helping reefs deal with climate change.

“The study shows that we know enough of the science to act- and with the effects of climate change only increasing, we have little time to waste.” -Dr. Colton

The research was funded by the Gordon and Betty Moore Foundation.

Read the full press release about this paper www.coral.org/savecoralreefs.

CORAL is excited to announce a new partnership with Skye Instruments, LLC to benefit our Clean Water for Reefs Initiative in Maui. Earlier this month, our team installed two weather stations in the Honokowai and Wahikuli watersheds. Skye Instruments generously donated a weather station for each of the watersheds we are currently working on restoring in the Ka’anapali area of West Maui. These two weather stations will provide CORAL with information on local weather conditions including temperature, wind speed and direction, rainfall, soil moisture and– best of all – are all powered with solar panels.  The data generated by the weather stations will be remotely transmitted, allowing our Maui program to look at real-time weather conditions at our sites, plan watering schedules for native plants at our restoration sites based on local conditions and determine how these environmental factors are influencing the success of our restoration projects.

The data will also help us analyze the amount of rain that triggers sediment to mobilize across the landscape and cause “brown water” occurrences in coastal waters. Brown water advisories are issued by the Department of Health of Hawaii when heavy rains cause flood waters that contain chemical runoff, sediment pollution and waste from overflowing cesspools. Last year alone, there were 167 Brown Water Advisories issued in West Maui. These events are harmful to people and corals, as the pollution from stormwater travels downstream and eventually settles on coral reefs, where it causes coral degradation and death.

Armed with the information from the new weather stations and the turbidity monitors installed near the mouth of Wahikuli and Honokowai streams, CORAL will be able to investigate the correlation between rainfall, sediment accumulation at our restoration sites, stream turbidity and sediment accumulation on coral reefs.  As the native plants we have planted at our restoration sites become established and more erosion control practices are installed, we aim to show that more sediment will be retained on the land. Ultimately, our streams and reefs will be cleaner due to our restoration sites and monitoring programs,  and West Maui will have less brown water events in coastal waters, benefiting both people and coral reefs.