Your generosity has helped all the animals at Cheetah Experience! 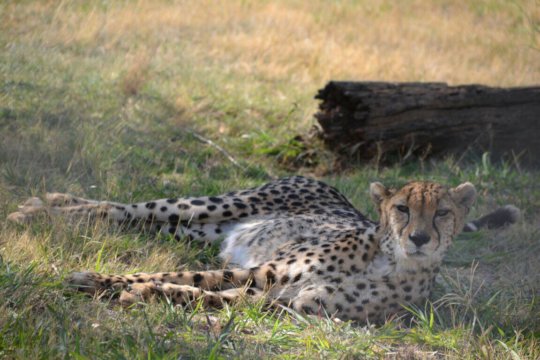 Not only have we had some trouble with sourcing meat, we've also been dealing with some cheetahs struggling with their health. One of our beloved cheetahs Aloe had to be rushed to the vet when we found her completely unresponsive one day. The vet told us she had had a seizure so we gave her medication and had someone keeping an eye on her at all time. Aloe battled with seizures for months, having up to 10 seizures a day, and after many tests, no cause was found. Her condition deteriorated rapidly and after more tests, dead spots were found on Aloe's brain, causing the seizures. We had no choice but let her go. Unfortunately, there was nothing we could do for her but we miss our girl every day.

Also, one morning we found one of our other beautiful cheetahs Adamu not putting his paw down. Again, we went straight to the vet, who told us he must've got his paw stuck somewhere. He ripped a lot of skin off and there was almost nothing left to stitch it back up. He got medication and it took him a few days, but fortunately he recovered completely eventually.

As you can see, your donations make a massive difference in our animals lives. All the staff and animals thank you so much for your continued support! 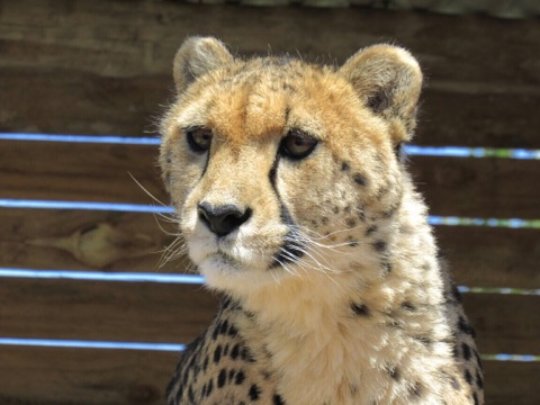 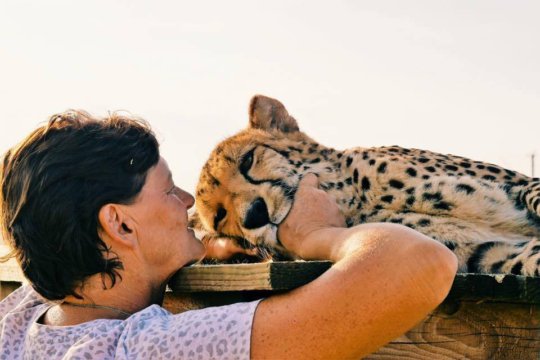 This project report is a submission to GlobalGiving's 2017 FailForward Contest, where organizations are asked to share a story of when they tried something new that didn't go as planned and how they learned from it. Enjoy!

Cheetah Experience is a non-profit organization that was founded 10 years ago by an amazing woman called Riana. At the time, Riana had been working full-time for the Department of Justice for 22 years, but it wasn’t her dream, passion or calling in life.  After much consideration, she decided to take the greatest risk of her life – she resigned, as she decided to pursue her lifelong dream: doing whatever she could to save the cheetah from extinction. Her journey started with one cheetah, named Fiela.

Fiela had a rough start in life, which is why she still struggles to trust people. Riana is currently pretty much the only person who she allows to touch her and she won’t sleep anywhere else than by her side, every night.

At this stage Riana had no clear plan as to what the way forward would be.  She had nothing material - just her and Fiela and that was everything.. At that point, she was living in a town house with Fiela.  After eventually finding out that she needed a permit to keep a cheetah (and not in a townhouse either) she relocated to another game farm where she worked all jobs for a considerable length of time.  Every night she dreamed about having her own place where cheetahs were in abundance and where she could do her bit in saving these graceful creatures from extinction.

Riana realised she needed to dream big but start small – so that’s exactly what she did.  She arrived at the now Cheetah Experience with Fiela.  No money, no food, no furniture, no fence, no garden and a building that was falling down as her ‘home’ - along with a feeling of intense fear.  But she wasn’t alone as long as she had Fiela.  Her cheetah was her inspiration and Riana often went without food so that she could buy food for Fiela.

Riana had always been involved with hand-raising cubs and used to help “friends of the zoo” where she started to earn a good reputation hand rearing cubs. So she did what she knew best - she raised cubs to bring in an income. She had lots of animals who moved into her home.  Eventually days turned into weeks and weeks into months and Riana had four cheetahs that were permanent residents at Cheetah Experience – she then opened her doors to the public for daily tours. In order to help the cheetah, Riana knew that education would be the key to the species survival.

As time passed and more animals became part of the project, Riana realised that she would need help. The volunteer program was created, not only as a way to bring in people to help, but to also give back, and educate the volunteers. Meanwhile, Riana did everything in her power to bring in cheetahs to breed with, in order to save the species. Step by step, the volunteer program started taking off, providing some much needed money for the project. Thanks to the volunteers and donations, Riana was able to feed her animals and build them big, beautiful enclosures. At that point, social media wasn’t such a big thing, so Riana really struggled to reach a lot of people and depended on word of mouth advertisement and tourists visiting.

At times, the project would only have a few volunteers so Riana had to find other ways to buy new building materials, do the very much needed renovations, buy electricity, plant trees for shade etc… Sometimes Riana and the entire team would save the little they had to make sure the animals had the best life they could ever imagine. At Cheetah Experience, it is important that the animals always come first.  However for some reason, the attempts to raise money by fundraising were never successful.

In the last couple of months, Riana has discovered the importance of social media and fundraising in particular. Through social media, she found a way to reach more people and become more successful at promoting fundraising projects. She realised that the previous attempts to raise money failed because she didn’t have the right people working on it. She realised she needed someone professional to be in charge of the fundraising, promotion and marketing side of things. Having someone who understands marketing helped us immensly. Not only did they do an amazing job when it comes to marketing and fundraising, They also helped us to graduate from the GlobalGiving Accelerator Program. Thanks to these efforts, we were able to raise more money, which will be used for various things including building a better meat room, optimizing the running machine for the cheetahs giving them the opportunity to have more exercise, etc... Hopefully we will be able to raise even more money in the future to buy the solar panels Riana has always wanted. This way we can save money on electricity, so that we can spend it on other things for the animals, and do something for the environment at the same time.

Our dreams may have started small but have now become even bigger. Step by step we’re trying our best to reach our goals for the animals. 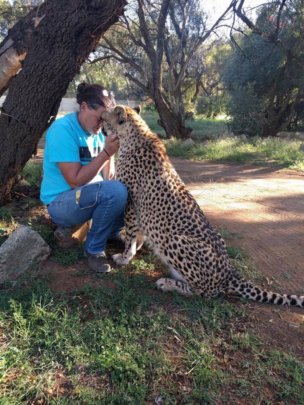 You've helped provide medical care for one of our beloved cheetahs, Dew 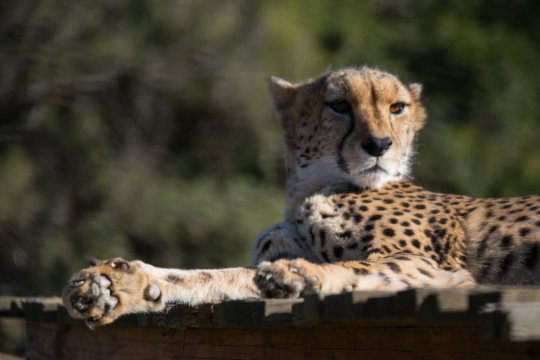 Dew having a relaxing afternoon on her platform

Dew has been suffering from a nasal discharge for a few weeks, after some observations it was decided to anaesthetise her to investigate further.

Our veterinarian Claudia, and the staff team sedated Dew and transported her to the Cheetah Experience Veterinary and Wildlife Research Centre.

Claudia took a look in her nose and mouth, took bloods and various samples, then x-rays to see if she could determine the cause of the discharge.

The samples have all been sent off to a lab for investigatory tests.

Dew was returned to her enclosure, and woke up over the course of the afternoon. Dew is doing much better now, is on medication to treat the nasal discharge, and has been closely monitored by our staff member Rene.

Watch the video of Dew during her visit to our vet clinic.

Thank you for your generosity and helping our beloved Dew receive the best possible care.

If you would like to support our project again, one great day to do this will be Tuesday 19th September when GlobalGiving will provide a 20% match to donations (between $25 USD and $1,000 USD per donor) made online beginning at 9 AM EDT until available matching funds are spent.

Thank you very much for your interest and love and support of our animals. Please feel free to contact me with any questions, comments or ideas. 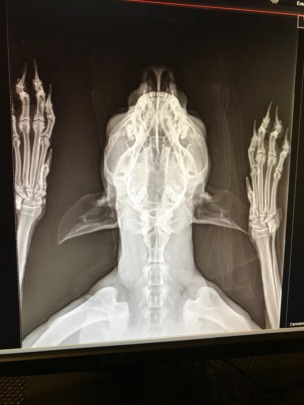 Dew's xray from her visit to our vet clinic
‹ 1 2 3 4 5 6 7 8
WARNING: Javascript is currently disabled or is not available in your browser. GlobalGiving makes extensive use of Javascript and will not function properly with Javascript disabled. Please enable Javascript and refresh this page.