To meet the environmental challenges of today and tomorrow according to Kole Intellectual Forum’s aim to empower out of school girl child to fight for their rights in Uganda; through, one of their course unit (Child Development) at Home Economics in their institute; the organization has intensively focused on the study of Environmental science of 11 teams of 400 staff of the Wageninen University (2019) that each focused on a practical, efficient and cost effective environmental outcome.

The area they (the teams of the University) executed and thoroughly studied by the team of Kole Intellectual Forum purposely to use the materials to empower their girl at the Institue, the study include: flora and fauna, soil, water, landscape and spatial planning, climate, forestry, recreation and governance, vegetation, land cover and land use, the use of geo information and remote sensing, and environmental risk assessment.

Although, the team of Kole Intellectual Forum intends to implement all of those ideas; it is unfortunate that all of them cannot be implemented at once; to begin with, the instute has started by exposing their to a number of those areas of concern; for instance, on Monday of the 3rd May 2021, the team of the Institue took the students to the Nusery bed of various spices of seedlings of trees for viewing and thereafter they intend to ask the stundents to do the same at the Institute and in their different places of lives as they would be fully prepare for future. That is, to be able to face the the environmental challenges.

The stundents on the other hand well prepared to do a lot within this 3rd term of their course May to August 2021; and, so far they have already hipped and planted about 500 hips of sweet potatoes and they are  planning to re-afforest the area that are near their institute.

A member of the Nursery Bed speak to them 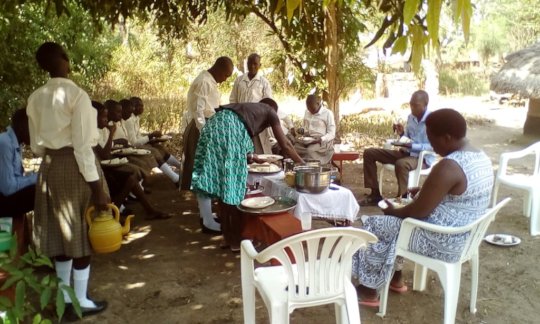 Project Leader and other leaders eating with girls

Alhough, a number of funds are being recieved from the platform of GlobalGiving are being allocated for different budgets on the organizational project page; such as: for buying school uniform for the empowering girls; procuring of pairs of shoes for them; buying rolls of clothes to support the girls' social enterprising entity; making liquid soap for promotion of hygiene and sanitation to avoid spread of diseases including COVID-19; meeting of Administrative cost as well as putting in place, the apparatus that would be meant to conduct Kole District educational review meetings and conferences; on the other hand, Kole Intellectual Forum has partly allocated some part of the funds being recieved to procure food stuff that is meant to feed the girls for a purpose.

Purposely, that is, the feeding for a purpose, that is being championed by Kole Intellectual Forum, is meant to empower the girls to enable them to:

Given that: since September 2020 when the institute became operational, these girls have been full time students of the Institute and these assumptions numerated above, have undoubtedly not failed to prove itself worthwhile.

We at Kole Intellectual  Forum are therefor very grateful to recognize the positive respond of our patrons on the platform of GlobalGiving that are supporting the mission of our organization.

Kindly, be informed that: the project is linked on the same link at: http://goto.gg/31562 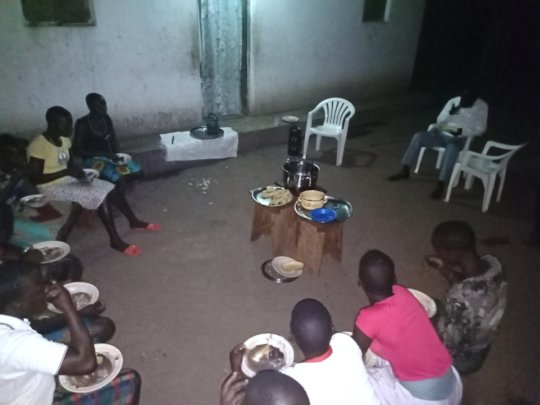 Girls are fed 3 times a day including supper 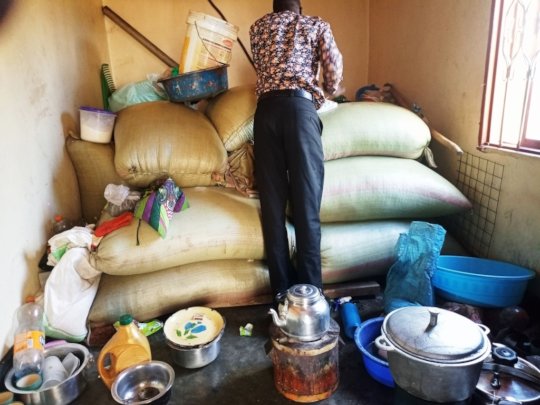 Food stuff at the store of the girls

Community Led Organization: Is to be Trustworthy

A courtesy call to the office of RDC: KIFA

Kole intellectual Forum (KIFA) after exploring through its organizational dashboard on GlobalGiving and having learnt a lot about a number of things at the platform of the same; the organization has come to understand that, to make it easier for its potential funders, community (local and International), including the team at GlobalGiving to identify her, support her and to strengthen her in their campaign to achieve to its set and expected goals; then the organization should endeavor to work out required things or lay out a strategy that make her look like a community-led organization in practice as well as that, that can be supported by the communities themselves.

In that, in practice, the organization is working out its strategy in building-up its relationship with community and the authorities that authenticate its activities; and among others,

The organization is also positioning itself as a local trusted facilitator first, either than that, that only looks like a vehicle of service delivery to the communities.

As the eye of a beholder of projects or nonprofit organizations within every district in Uganda; the RDC or Resident District Commissioner representing the president in every district in the country; according to his schedule of duties, the personality is expected to monitor, supervise and authorize the activities of all the NPOs within its area of jurisdiction.

In line to the above statement, Kole Intellectual Forum that being a Community-Led organization; the organization is interested to build-up its trustworthiness both locally and internationally; in that, the organization (project leader together with the students - Girls) has made a courtesy call to the head of state or the representative of the president to the district of Kole on the April 7, 2021 to inform him about their visibility, activities and 5 years strategic development plan within his area of operation.

In response to that, the Resident District Commissioner was grateful for the initiative of the team of Kole Intellectual Forum and promised to give them maximum support especially at local level and wish them sucess in their endeavors.

Section of the KIFA's team at office of RDC

‹ 1 ... 6 7 8 9 10 11 12 13 ... 49 ›
WARNING: Javascript is currently disabled or is not available in your browser. GlobalGiving makes extensive use of Javascript and will not function properly with Javascript disabled. Please enable Javascript and refresh this page.