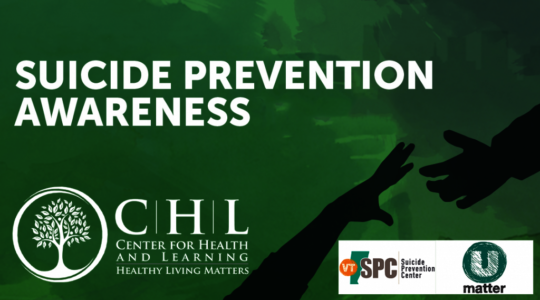 Thanks to regional media partners, platforms and agencies across Vermont, the word about suicide prevention awareness and support is getting out.

As part of September’s Suicide Prevention Month, Brattleboro’s Center For Health And Learning (C|H|L) played an active part of the national movement to bolster public education around ongoing suicide prevention strategies, training, and funding needs. Suicide remains a growing public health concern across Vermont and the region, and C|H|L works with an array of regional media to promote better understanding, best practices, programs and resources.

Thanks to media groups including PBS, VT Digger, the New York Times, VPR, Catamount Access Television, The Bennington Banner, and social media platforms like Facebook and Twitter, a significant awareness campaign improved reach, frequency and impression rates across the state.

Quarterly reporting to Vermont’s Department Of Mental Health revealed increased efforts statewide, applying integrated media for improving public awareness around the issues and resources for mental health support. C|H|L provided press releases to 53 regional newspapers, PSA’s were sent to 62 radio stations, and VPR interviewed C|H|L’s Executive Director JoEllen Tarrallo for a live radio talk on Zero Suicide on September 19th, which was then linked on multiple websites and distributed via e-mail as a podcast.

In addition to earned media were disseminated information kits, webpages, articles, PSA’s and Youtube videos, all integral parts of awareness campaigns CHL deployed across Vermont. Key partners like Vermont’s Agency Of Human Services, The University Of Vermont, The American Foundation For Suicide Prevention, Vermont Care Partners, and The Suicide Prevention Resource Center all participated to ensure that a high quality of approved messaging reached the public.

Next week, CHL will be conducting an end of year Crowdfunding campaign.  Please look out for it and consider supporting us with your end of year giving!

Thirty (30) school gatekeepers from around New England recently attended The Center for Health and Learning’s 2-day Umatter® For Schools training on October 1 & 2, in Montpelier, VT.

Umatter® for Schools is a national best practice program for suicide prevention developed by the Center for Health and Learning.  The trainings are created for middle and high schools and provide comprehensive school-based suicide prevention strategies and programs, including protocols, staff and parent training, and support curriculum for students.  Schools are encouraged to send teams consisting of an administrator, guidance counselor, nurse, health educator and/or mental health provider.

Some quotes from our recent training exit evaluations:

"This is the first time that I have been at a training whereby we could bring back a completed document, thank you!"

"Thank you for putting on this training. It has been so helpful to have dedicated time to think about this work and what our school’s needs are. The handouts are very helpful and have provided many great ideas about language to use with students as well as adults around suicide and ideation, threats and attempts."

"This is a very comprehensive training on a very sensitive and difficult topic. Materials are provided to make it incredibly simple to move forward with staff and community training. Thank you for helping remove the stigma of bringing this topic into our schools/communities."

For more information on Umatter® For Schools training and programs: https://healthandlearning.org/umatter-suicide-prevention/

Please continue to help support programs like this.
Oct 14, 2019

The Umatter Youth and Young Adult (YYA) program kicks off this year on November 14th at Lake Morey Resort. We are currently recruiting groups of youth ages 12-21 from schools and community organizations. Our new promotional video is helping us communicate what youth can expect to experience and achieve by participating. You can view the video here: https://youtu.be/IND7omnkv2Q

This year we are conducting a comprehensive evaluation of the program. Evaluators from the Center for Rural Studies are creating evaluation tools to gather both process and impact data. This information will help us improve the quality of the program as well as determine how the program impacts the resiliency of participating youth. A full evaluation report will be published by June 2020.

Umatter YYA is collaborating with a number of organizations around the state of Vermont who also provide youth engagement opportunities including Vermont Afterschool, UVM Extension, Up for Learning, and Vermont Federation of Families to name a few. This collaboration will allow us to offer new opportunities for leadership and facilitation skill development as well as connection with other youth leaders around the state. We are excited to be a part of the growing efforts to empower youth to take action in impacting issues that matter to them.

Please help support Umatter for Youth and Young Aduts by giving to this project today!