A New School Year has Begun! 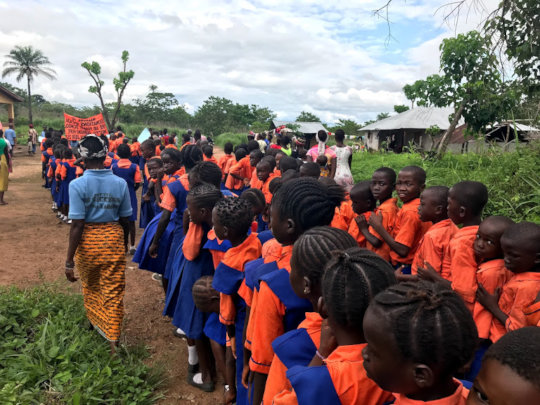 A NEW SCHOOL YEAR HAS BEGUN!

Monday, September 9th, 2019 was an exciting day as EduNations schools reopened for the 2019-2020 academic year! Students returned feeling refreshed from their summer breaks, many of them using this time to rest, help their parents with farm work, and visit extended family in other towns and villages.

The first day back was busy and full of joy. In preparation for the beginning of school, the heads of schools had worked with contracted tailors to prepare school uniforms and on the first day of school, they had the opportunity to pass them out to their students.

Smiles could be seen on everyone’s faces as school supplies were passed out.  In many communities, people joyfully paraded around the school campuses singing and dancing. In their songs they praised God, EduNations donors, the President and the administrative staff. One parent even shed tears of joy because she was not expecting such a big blessing at the time.

The day ended with broad smiles and hearts filled with love and thankfulness. As the day drew to a close, one of the student’s parents exclaimed, "We've reached a milestone in my child's education as she has got all her 2019-2020 school materials!"

We are so excited to see what this school year will bring!

By Samuel Sesay - Project Leader
Hi,
For our project report, I thought I should share with you a report written by an educator who visited EduNations work in SL this month.

In July of 2019 I had the opportunity to join a team of educators facilitating a training conference for teachers working in rural villages of Sierra Leone.  My role on the team was to provide computer training to the heads of school and some math teachers. Other members of the team included a middle school science teacher, a college engineering professor, a preschool teacher, and a counselor.  The conference was held for three full days in the village of Mapainda in Sierra Leone.

Sierra Leone is one of the poorest countries in the world.  In 2018 it ranked 184th out of 189 countries on the United Nations Human Development Index.  While there are a number of reasons for this, some recent events have had significant impact.  The nation endured a civil war fueled by the blood diamond trade from 1991 to 2002 and was struck by the Ebola crisis just a few years ago.  The unemployment rate is around 50%, and 75% of those who have employment are classified as working poor, with only 16% of workers being considered skilled laborers.

To combat these issues, an organization called EduNations was started to provide education in villages that were too far away from existing schools.  Their hope is that through education they can enrich local communities and strengthen the nation of Sierra Leone.  Over the past 15 years they have built 15 schools in six villages throughout the country.  They currently serve 2,700 children ranging from kindergarten to eighth grade.

Before the teacher training conference my team got a chance to observe teachers in the classroom while school was in session.  One of the lessons I observed was in a middle school math class.  The students were learning how to solve for a single variable in an equation.  The teacher walked them through the process and then had them try some problems on their own before finishing the class by having some students work through a problem on the blackboard.  In other words, it looked very much like a typical middle school math lesson in the United States.

What differed from American schools was the environment.  The building is a simple concrete structure with an uninsulated metal roof.  This means that lessons occasionally need to be paused because no one can hear anything over the roar of rain hitting the metal roof.  In the middle of an African village there is limited electricity access, so there is no air conditioning to combat the hot and humid climate.  In addition to this, students might walk or bike up to 10 miles one way to get to school, many without eating breakfast or lunch.  I know I have a hard time focusing when I am hungry, so I can’t imagine trying to get a class full of hungry kids to pay attention.  Finally, due to a limited budget, the teachers do not have many, if any, teaching materials.  They have a blackboard and chalk and some government curriculum from the United Kingdom.

After observing the lesson, I was feeling restless.  Luckily, there was a crowd of elementary school kids playing soccer in a field near the school.  I had a lot of fun running around and playing goalie.  The children gave me lots of high fives and shook my hand; white skin is a novelty in the remote villages of Sierra Leone.

It was finally time to start the teacher training conference.  Almost all of the teachers had gathered in the village of Mapainda to participate in the training.  The president of EduNations stood up and welcomed the teachers and introduced my team who was leading the training.  It was at that time that a chicken decided to walk into the room.  No one batted an eye.

On the last day of the training, I invited some middle school math teachers to join the computer training.  During the previous month, myself and a few other members of the development team figured out how to get Mathia working on one of the laptops I had brought to Sierra Leone.  A group of math teachers huddled around a laptop as I showed them how to navigate Mathia.  Once they got the basics, they started working through problems.  It was incredible watching these teachers from a completely different culture engage in the universal language of mathematics.  While I knew they wouldn’t be able to let their students use Mathia I hoped they could use it to tailor their teaching and get high quality example problems to present to their classes.

When the training ended, my team and I felt a bit like celebrities.  Many of the teachers approached us wanting to get pictures taken with us.  We said our goodbyes and headed back to our hotel.  We relaxed for the last few days of the trip.  We toured some sites in Freetown and bought some souvenirs before getting back on the plane headed for America.

I was tired but satisfied with the work that was accomplished.  While it was not much, hopefully, the teachers saw that there were people who cared for them and wanted them to succeed.  It was great to see people who share the same passion for education in such a remote corner of the world.

Wrapping Up the Second Term 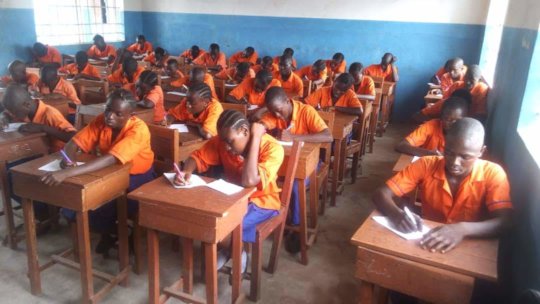 Another EduNations school year is coming to a close, with just two months left. As the year wraps up, EduNations' students are completing their end-of-term exams. Below is a brief description of the annual exams, written by our Education Officer, Hassan M. Koroma.

The 6-3-3-4 system of education in the country calls for two tests every term; the first test (T1) is administered mid-term and the second test  (T2) toward the end of the term after the annual athletic competition.

T2 is a comprehensive assessment covering academic knowledge, skills, and aptitude through both verbal and written testing as well as the students’ physical fitness.

The student’s annual report card, while of course considering grades and attendance, also addresses a more holistic assessment in three major areas:
1) “cognitive” including comprehension and retention of academic material,
2) “psychomotor” including mental aptitude and physical skill, and
3) “affective” including personal behaviour and social skills.

While this is just an overview of the assessment process at the end of a term, we hope it conveys how dedicated EduNations staff are to providing the best education possible. 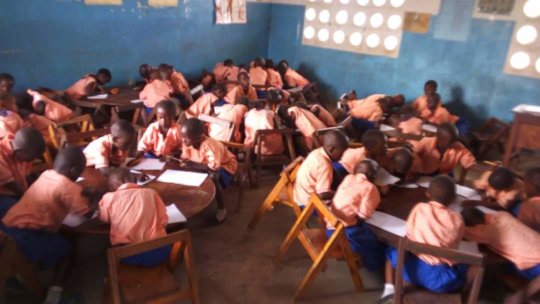