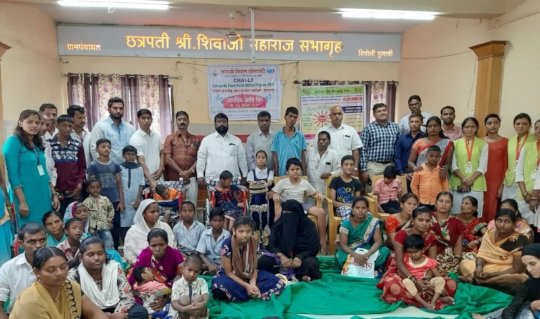 I am very thankful to present our eleventh report of the project - Rehabilitate 250 disabled children in India via GlobalGiving. Following are some of the glimpses from the field.

Through Saksham program, 33 new Self Help Groups (SHGs) have been formed in between Oct. 2019 to Nov. 2019 in Sangli and Kolhapur districts. Total 660 women have newly joined in the SHGs to empower their lives. We also conducted 04 plastic eradication awareness programs  with the collaboration of SHGs . The awareness was in the form of rally and more than 5000 people participated.

We celebrated World Disability Day on Dec. 03 in two working villages; Herle and Shiroli in Hatkanangale tehsil of Kolhapur district. In Herle village 12 CWDs, 29 PWDs and good number of school children, teachers and public participated. In Shiroli village 42 CWDs, 48 PWDs, their families and children from Shiroli primary school enthusiastically participated in the rally. The main aim of the rally was to provide awareness among people for the inclusion of Persons with Disabilities. The students were carrying the placards and shouted slogans related to the rights of people with disability. The Childline team of SMS enacted a street play related to child abuse and role of childline in such situations. We distributed Wheelchair, caliper, splint and hearing aids for the selected CWDs of new working village, Shiroli. We also honored a CWD, who got the first prize for shot put competition in district-level.

Sangli Mission Society has done flood relief work in collaboration with several organizations, NGOs and the community people. We were able to give our helping hands to people of 40 villages in Kolhapur and Sangli districts. We were able to provide the flood affected with food kits, educational kit, hygiene kit, household articles, etc. to the needy. We will be sending you a report of flood in the next report.

Following is a real story from the grassrrot…

“My name is Sandeep, 32-year-old, physically challenged person (70%), living in Kolhapur. I have completed my graduation in BA. As I grew, my curiosity towards the cause of disability also budded in my mind. But I wasn’t sure that how my parents will accept the question about the disability. One day my mother told me that the root cause of my disability is the result of their unawareness towards proper vaccination. At the time of polio vaccination I was feeling feverish but my parents weren’t aware that vaccination at the time of fever will leads to disability. I am accepting my current physical situation and I don’t want to blame or curse my parents for my disability.

In 2013 my application for Sanjay Gandhi Yojana got sanctioned, and I am getting Rs.600/- per month. I had to go to Kolhapur District Central Cooperative Bank, for receiving the particular amount. But whenever I go, I used to face lot of challenges for this. But I didn’t take any initiative to solve the issue. In 2018 I attended a meeting conducted by Sangli Mission society in my village. The meeting was about something called Grassroot Comics, at that time I was new to this concept. But team made us understand that it is a platform for discussing our (PWDs) issues through comics. They told us to think about the issues we are facing. The issue came to my mind was that, the cash counter or any other counters of the bank are built in a particular height which I was struggling to attain. So in order to fill the transaction forms and completing other process I was always seeking others help and I felt so bad about depending on others for my transactions.

SMS conducted a dissemination of all the grassroot comics in the village as well as in bank. SMS arranged an advocacy meeting with respective people to discuss about each issues and that made a twist in my life as well as all the other disabled’s life. Bank manager got sensitized about the issue facing by disabled people through the dissemination of grassroot comics and advocacy meeting. As a solution to this issue the manager appointed a Peon for helping people with disability. I am so happy that through this platform, I was able to express my issue and today it is benefitting the Persons with Disabilities”.

Wish you all Merry Christmas and propsperous New Year... 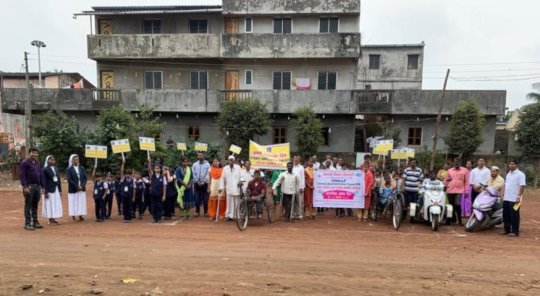 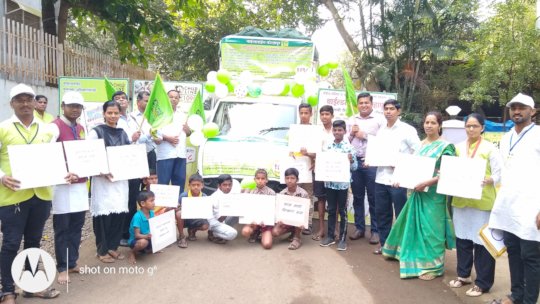 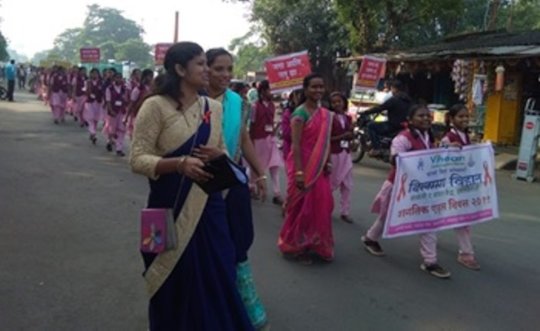 Its time to help the flood affected... 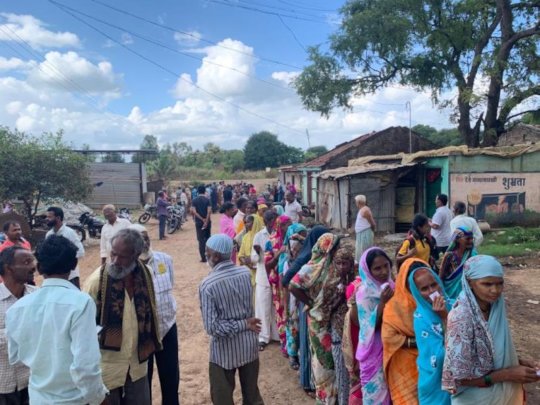 I am very thankful to present our 10th report of the project - Rehabilitate 250 disabled children in India via GlobalGiving.

In the first week of August 2019, severe floods affected the southern Maharashtra of India due to unusual high rainfall during the monsoon season. As per experts’ review, this year’s flooding, has been far worse than the flooding of 2005. Low pressure, heavy rains, large discharge from dams was the main causes of the unprecedented flood. In Maharashtra, Sangli and Kolhapur are the two districts which badly affected by the flood. There was massive water logging and flood which lasted for almost ten days.

The Sangli town in Maharashtra and villages were flooded due to the overflowing of the Krishna river. Approximately 22 people from the district have lost their lives to the floods. In Kolhapur 08 tehsils were affected and 12 rivers were swollen by life threatening flood and minimum of 16 people lost their lives.

One of our special schools, Pratiksha, Watul, Ratnagiri got inundated with flood water in the night and lot of damages to things and livestock were reported. The school also lost their occupational therapy room costing around 3.5 lakhas which was made possible by the help of many kind hearted donors. All the children and the staff are safe by grace of God.

More than two lakhs plus children and adolescent have been traumatized by this unprecedented flood and they are looking for interventions to lead a normal life. Loss of near and dear ones, documents, houses and belongings will surely make negative impact in the lives of children and youth.

From 15th August the Sangli Mission Society started doing flood relief in collaboration with Government departments, NGOs and community people after identifying the need of the people. The organization conducted a survey for the need assessment at the flood affected villages. On the basis of the survey we got to realize the beneficiaries. We were able to distribute materials which include food items, hygiene materials, utensils and educational materials in different villagers Sangli and Kolhapur districts like Halondi, Ingali, Kanwad, Ghalwad, Rajapur, Rajapurwadi, Khidrapur, Dhavali, Padmale, Dudhgaon, Mauje Digraj, Kurunthwad, Arjunwad, Haripur, Raman Mala, Aurwad , Gaurwad, Bhendavade, Vaddi, Mhaishal, Ankali, Juni Dhamni, etc; so far more than 4000 people got benefited. We are trying to give a helping hand to the affected marginalized communities through various sustainable interventions. Health and education are the two main areas we are focusing more.

We were with the little ones of humanity, traumatized by the unexpected tragedy that affected Sangli and Kolhapur.

We are helping the poor and the needy. There are so many people who have lost their houses. We are connecting them with philanthropic people. We are planning to post a project to thelp the flood affected shortly and hope all of you will come out to support the people who lost everything to the flood.

Let us come together to bring back the lost smiles!!! 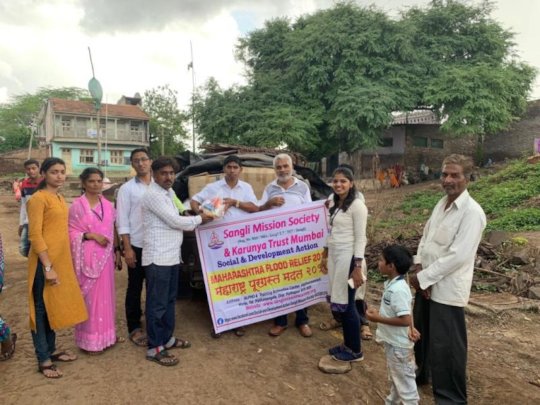 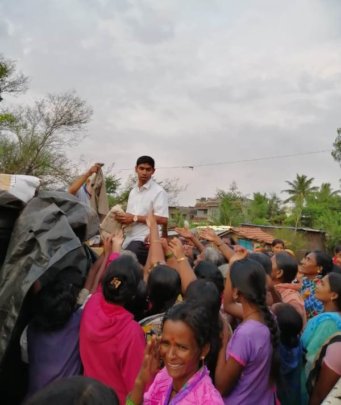 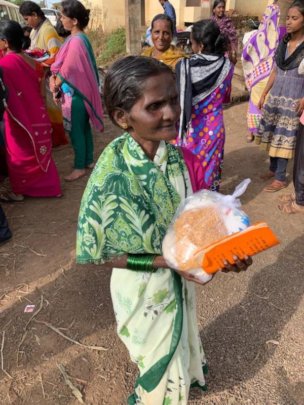 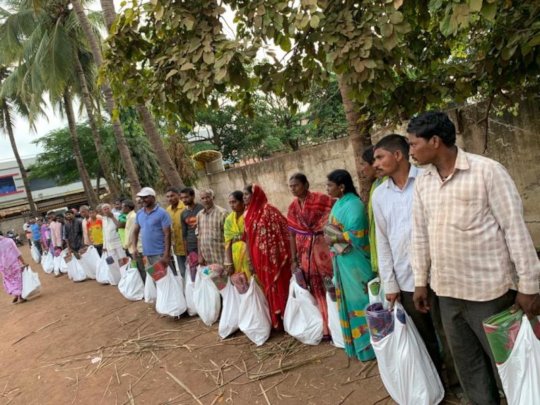 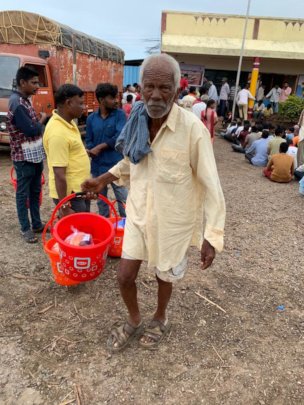 For a sustainable planet 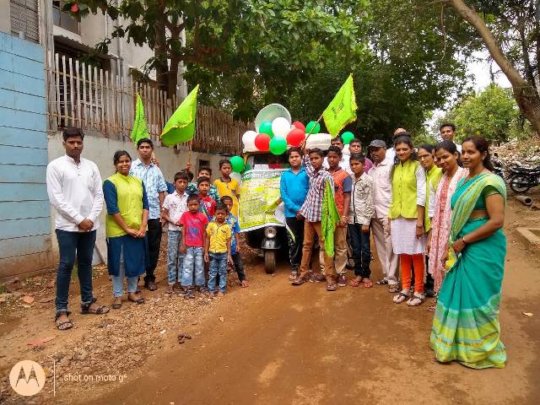 I am very thankful to present our ninth report of the project - Rehabilitate 250 disabled children in India via GlobalGiving.

The Special Schools have reopened after vacation and the Schools are getting back its rhythm. We are preparing and looking forward to another academic year where we can give our best and hope the best.

In the Sangli and Kolhapur districts, through Saksham project, a total of 16 new Self Help Groups (SHGs) have been formed between April 2019 and May 2019. 220 women have newly joined the SHGs.

Through the Adhar project, a total of 77 rural poor people from below poverty line families were linked with Micro Insurance policy.

One day picnic was conducted for the disabled children on 10th May 2019 at Dream World Water Park, Kolhapur. 25 Children with Disabilities (CWDs) from various villages spent the day with various joyful water amusements.

Grassroots comic training was conducted on 24th and 25th May 2019, at Alpho Training and Animation center, Alphonsa Wadi, Herle, Kolhapur. 25 Children with Disabilities (CWDs) and Youth with Disabilities (YWDs) had participated in the training.

Thank you very much for supporting our activities. Please feel free to visit the page- https://www.globalgiving.org/projects/rehabilitate-250-disabled-children-in-india/ 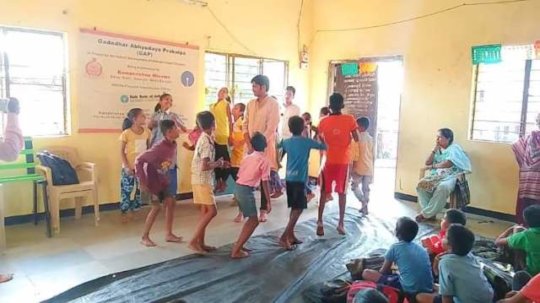 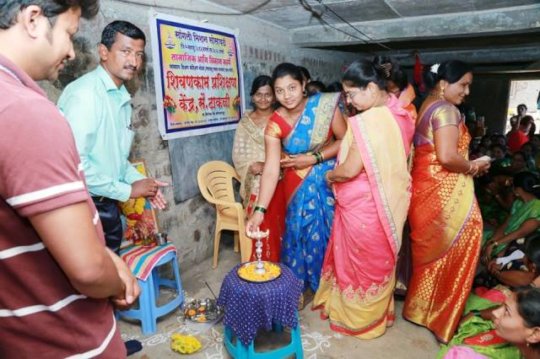