Our Chelly Scholars at the Harpswell Foundation 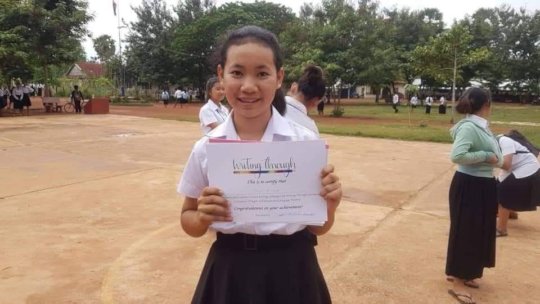 To all Chelly Foundation Friends and Donors:

It is with a great deal of pride and joy that I provide this update.  As remarkable as it is, we now have two of our Chelly Scholars being admitted into The Harpswell Foundation, a leadership academy for the best and brightest young women in all of Cambodia.   The mission of the Harpswell Foundation is to equip young women with the leadership skills in order to create and inspire positive social change. Here is how a US former Ambassador described Harpswell when it was founded in 2003:

Harpswell Foundation is a U.S.-based NGO that offers talented young women from the provinces an opportunity to help themselves and their community by assisting them with education, housing, and leadership training. The women of Harpswell are studying at some of Cambodia’s best universities, and the first graduates of the program are already going on to do amazing things in Cambodia and beyond.” – William Todd, Former US Ambassador to Cambodia.

Harpswell students live together while going to universities in Phnom Penh, where they are provided with an immersive program giving them every opportunity to learn about the greater world, through expert speakers and a wide range of extra-curricular programs.

Harpswell only admits 20 or so young women each year from all of Cambodia, after interviewing potential admittees from high schools around the country.  The fact that two young women from the villages we work in have been admitted to Harpswell is nothing short of extraordinary.

Two years ago, one of our Chelly Scholars, Jakkrya, was admitted into Harpswell -- the first girl graduating Chum Kiri high school (where the Chelly Library is situated) ever given the opportunity to attend Harpswell.   She was admitted after the Chelly Foundation sought out senior staff at Harpswell to consider inviting for the first time the principal at the Chum Kiri High School to submit names and applications from students in the villages we work in.

Jakkrya has gone on to distinguish herself at Harpswell, including by participating and winning awards in debate tournaments, as well as spending substantial time engaged in humanitarian activities and programs.  Jakkrya is now a sophomore at the University of Cambodia.

Our latest Chelly Scholar is Rina, who just graduated from Chumkiri High School this past Fall.  She received a creative writing certificate after participating in a week-long program by the Writing Through nonprofit organization, and sponsored by our charity at the local high school. She will have similar opportunities to shine while at Harpswell and while she pursues her studies on a full-ride scholarship from the Chelly Foundation.

I should add that Harpswell requires that each of its admitted students receive scholarships from other organizations to have students stay enrolled at universities.

All of our Chelly Scholars, both those who have graduated (8 so far), and all of the students still in college, have had their lives transformed by having scholarships given to them by our charity.   Because of you, these young women will continue their journeys to obtaining a university degree and a better life. 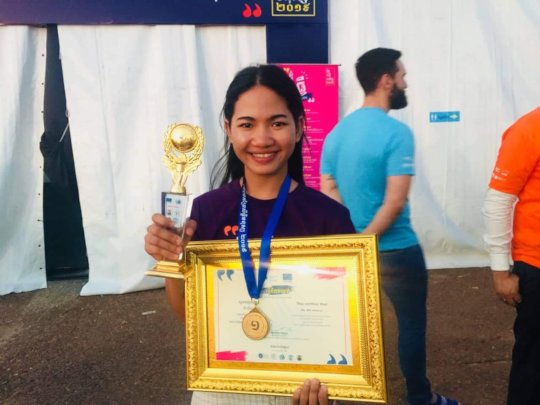 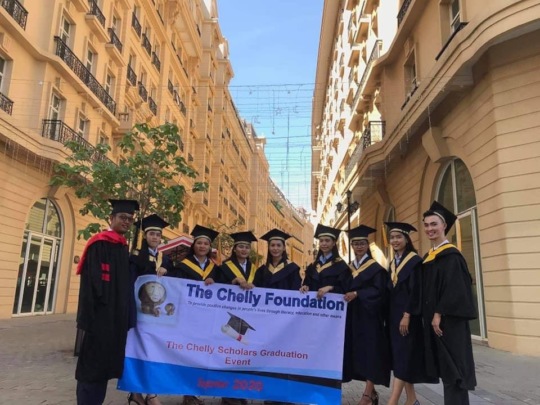 We have terrific news to report: as of this Fall, eight of our Chelly Scholars have received university degrees.   This is a life-changing experience for each of them, which could not have been possible without the support of donors to The Chelly Foundation.   Here are passages from a few of the letters received from the students:

My name is Channary.  I am from Chumkiri district, Kampot probince.  I come from a poor family.  My father and mother are farmers.  I am very lucky that I got a full scholarship from The Chely Foundation  I am veru happy because my dream has become true.  Now I have graduated with my bachelor degree at Vanda Institute, with my major in accounting.  My parents are so happy.  Now that I have a job, I can help my younger sisyter to continue her study.  She is a good student.  I will help to continue her study at a university the same as me.  I would like to say thank you so much to The Chelly Foundation and all donors who make my dream come true.  Your donation provided me with a positive change in my life.

My name is Srey Nich.  Today I am working at a bank in Phnom Penh.  I graduated with a bachelor's degree in banking and finance from Asia Europe University in 2020.  I received a scholarship from The Chelly Foundation that changed my life from a child who was desperate for education due to a poor family life, to a socially recognized person who has a good job and is able to earn a living on her own.  I was a person who was afraid of daring to face many people, but after I came to study in Phnom Penh, I dared to stop in front of many people, and dared to apply for a job interview on my own.  I would like to thank The Chelly Foundation for providing me with this scholarship.

My name is Srey Leap.  I am 22 years old.  I have three siblings, and I am the eldest in the family.  After graduating from high school, I dreamed of going to university.  But my family was poor and could not afford to send me to continue my education.  I was one of the lucky ones to receive a scholarship from The Chelly Foundation.  My family and I are very happy that the organization has helped me achieve my goal.  I am very thankful to the organization because after completing my four year bachelor's degree sat Asia Europe University, I changed. [I have a] new life, new experiences, a good job, know good people, made me more creative. I have income to help provide my family.  Finally, I would like to say thanks and wish the organization continues to move forward in in helping children who are incapable of continuing their education to achieve their goals.  Without the organization's funds, my life would not be where it is today.  Thank you so much The Chelly Foundation.  I love The Chelly Foundation.

The Chelly Foundation is currently supporting 15 young women who are continuing their studies at universities, including at the Royal University of Phnom Penh and the University of Cambodia.  One of our scholars is a resident at the prestigious Harpswell Foundation, a leadership academy for students at university, who I will provide an update on in a future report.  She has promoted a younger girl finishing high school this year, who we have accepted as one of our Chelly Scholars in the coming semester.     Our program continues to be a vibrant way to transform young women's lives from a very poor, rural community.  We can continue to offer these wonderful opportunities with your support. 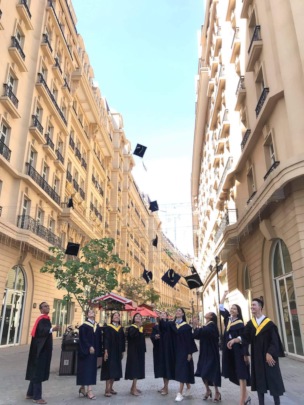 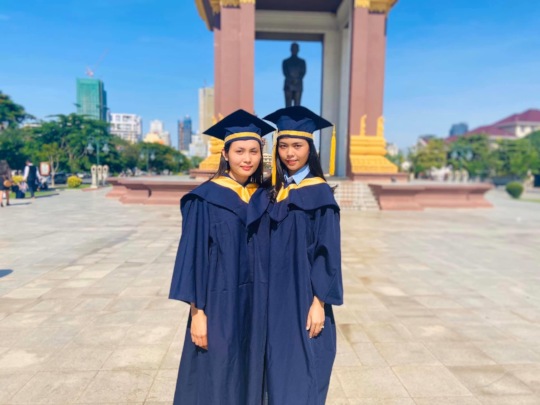 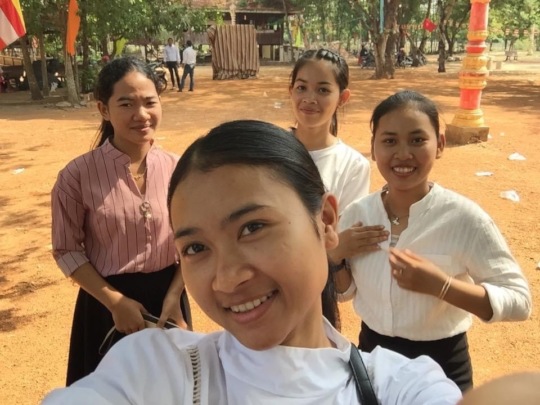 I am happy to report that despite the COVID-19 pandemic happening all around the world, all of our Chelly Scholars remain safe and healthy.   As of March 2020, universities in Phnom Penh suspended in-person classes.   But our students have continued to engage in online learning as best they can.  Some of the students returned to their home villages in Chum Kiri district, and others have elected to stay in Phnom Penh.  Here is a letter I received this week from Sokthai, one of our current 22 scholars:

"First, I would like to thank you again for selecting me as a recipient of [a scholarship from] The Chelly Foundation.  I am now a sophomore student at National University of Management in Phnom Penh.

As you know the whole world is suffering from Corona virus, so most of the countries are in lockdown.  In Cambodia, the government decided to close all the schools and [invited[ students to study with online classes.  In this period, it's very hard for me to go anywhere or go to work because some companies are off -- thus I decided to leave Phnom Penh back to my hometown.  I a staying home and learning in online classes in the evening,  My school uses two apps for students to learn online One is Google meet for teaching and one more is Google classroom for testing or exams.  For my online class its okay for me.  I still keep learning well and also know more about technology during this period."

Sokthai went on to say:

"I hope you and your famiy are safe and well. Don't forget to weark a mask when you go out and please be aware to wash your hands more often berfore touching to face, eye, mouth, and food.  Any risk of sickness can be happening anytime.  Please kindly take care of yourself.  Thank you again for your donations and always [caring] for me.  I hope to see you in person next year or one day.  With kind regards and best wishes."

Such a beautiful letter, written in almost flawless English!   Many scholars have written to me with similar sentiments.

Like Sokthai, some of our students have lost their part-time jobs due to lack of tourism in hotels or businesses shutting down.  They were in those jobs to obtain needed skills as well as to help better support their families.  Even though their life is now harder, I have assured each and everyone one of our students that we will continue to support them with scholarships through their graduation from college.

As I have said before, none of the students receiving Chelly Foundation scholars could ever have afforded the opportunity to go to college without your help.  And the good work we are doing is paying extra dividends: for example, one of our students, Channary, who graduated with a degree in accounting and is now studing for a second college degree in English, intends to support her younger sister going to college as well in the Fall.  Both came from extremely poor circumstances back in rural Chum Kiri, as I saw when visiting their home in 2018.

We will not let COVID-19 deter us in our mission to transform the lives of these young women. On behalf of all of us at The Chelly Foundation, I again thank you for your past donations and continuing support.

The pictures here of our students were taken mostly before the virus hit Cambodia.  One is from a visit to their home village, a second is from and the countryside around Chum Kiri.  A third is one of our students wearing a mask.  And the fourth picture is a picture of one of our students looking at the Phnom Penh skyline -- I would like to think she is dreaming of a very bright future for herself and her family.  Please everyone stay safe. 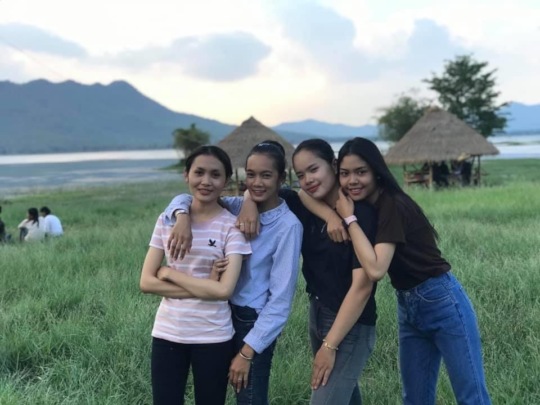 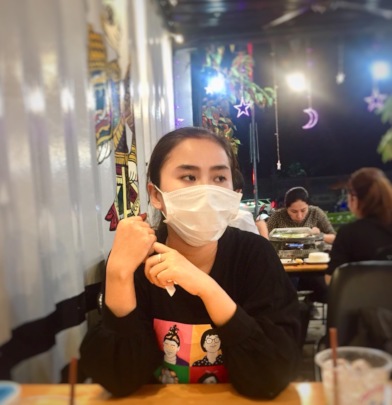 Looking to a bright future....

1 2 3 4 5 ›
WARNING: Javascript is currently disabled or is not available in your browser. GlobalGiving makes extensive use of Javascript and will not function properly with Javascript disabled. Please enable Javascript and refresh this page.