Why the Amazon is not burning in Ecuador

By Claire Nicklin - Board member

One of the big reasons Ecuador has not experienced the devastating fires that have swept the Brazilian Amazon is because indigenous groups like the Cofan are guardians of large swaths of land, protecting it from loggers and subsequent incursions of settlers looking to grow annual crops. This does not mean they are not feeling the effects of global climate change. While the Brazilian Amazon was especially dry during August, the Ecuadorian Amazon was experiencing record flooding.

The Ecuadorian government has been an environmental leader with its SocioBosque program that provides carbon credits for conserving forest. It has been a lifeline for the Cofan and other indigenous groups, but the payments have been getting delayed. Your contribution to the Cofan Survival Fund shows that the world cares about this important natural resource and carbon sink, and the people who protect it. 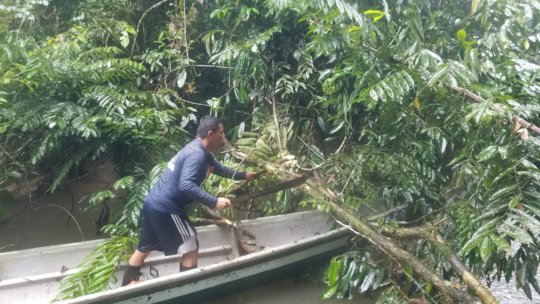 In addition to the important work of advocating for land conservation and securing important policy protections, the Cofan also do the necessary work of patrolling their territory to make sure the treaties are protected, which isn't easy! In April a group of 60 Cofanes divided into 5 groups and traveled on foot and by car and canoe over 55 kilometers to get to a 75-kilometer swath of river and trails by the Gueppi river on the Northern border near Peru. The preparation that goes into this type of expedition takes months and involves getting the paperwork for the canoes renewed, obtaining permits to buy gasoline, and repairing canoes. After a few nights of camping in neighboring communities and fishing for food, the group arrived at the placid and narrow Gueppi river. The water is a deep reddish brown, humic acids coming out of the huge mauriti swamps along the river stain the water, and at the same time, purify it. The group stops a few bends up the river to mix up banana and yucca drinks and “drink their breakfast” before continuing the voyage. The canoes drive slowly up the river as the person in front, armed with a chainsaw and machete clears trees and vegetation that have fallen over in storms. The people in the middle of the canoe are also hacking at vegetation with their machetes while the driver is maneuvering around the underwater obstacles. Fire ants and thorns are a constant nuisance, but the group is rewarded with friendly wildlife as well: macaws, pink dolphins, saki monkeys; fish jump, and howler monkeys roar in the distance in response to their outboard motors. They spend a week clearing trails and taking GPS points of key wildlife and landmarks. There are broken motors, mosquitos and torn muscles, but there are also nights under the stars, storytelling, and a wild boar hunt. The Cofan are important guardians of the Amazon forest and they continue to appreciate the support they receive from Global Giving to fund their conservation work. 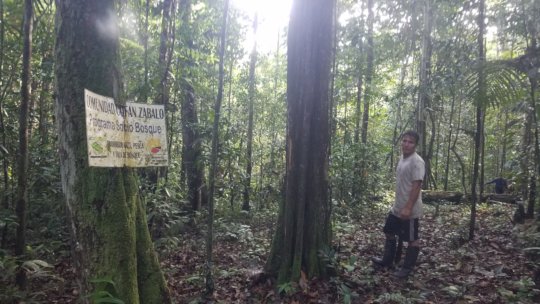 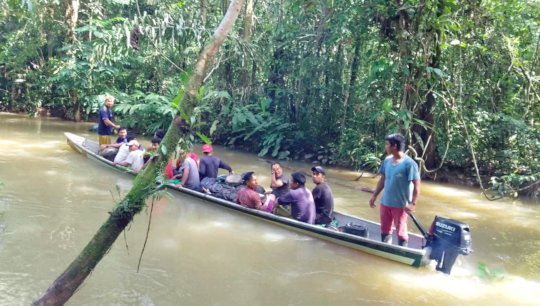 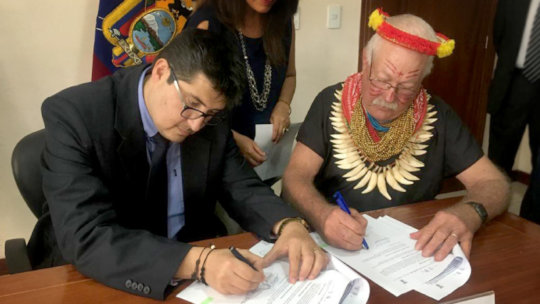 On January 16th, 2019 the Cofan nation in Ecuador signed a landmark deal to conserve 137,000 hectares in the Cuyabeno Wildlife Reserve. This legislation is the culmination of decades of work largely by the lawyer who works with the Cofan and the Cofan leadership to solidify and expand previous agreements. In 1992 the Cofan signed a historic agreement with the Ecuadorian Ministry of Agriculture, which was the first to recognize the ancestral rights of an indigenous group and gave them possession of 80,000 hectares of the Cuyabeno Wildlife Reserve. Subsequent treaties with other indigenous groups only awarded 10-year leases to protect park land, which makes them vulnerable to mining concessions. Over the years the Cofanes have been pressured to give up some of the "possession" language in the original treaty in exchange for control over more land. The steadfast leadership combined with dogged legal support helped the Cofan navigate changing governments and ministries and to update the original agreement on more solid legal footing, as well as increase their legal area to include the Guepii reserve, which they have been managing for years. Now it is more important than ever to raise funds for the park guard program to sustainably protect this territory.