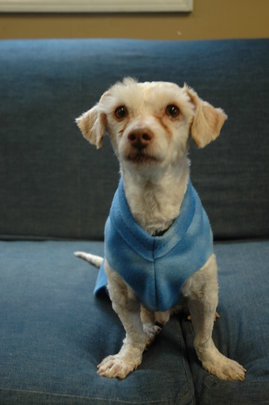 Poor litte Oscar. When animal control picked him up, he looked more like a miniature sheep dog than a poodle mix. His hair had grown over his eyes clear down to his nose. He was so matted he looked more like a Brillo pad than a dog. When he arrived at POOCH, every single item on his evaluation form was marked "unknown."

Danny, one of the more experienced youth, was confident he could work with Oscar successfully. His first task was to groom him. Oscar had to be shaved almost down to bare skin. Danny asked if we could get him a sweater, and Oscar wore that sweater day and night until his hair had grown back.

While Danny had trained more than 12 dogs, Oscar turned out be more of a challenge than he expected. Oscar absolutely hated to be groomed. He particularly didn't like his ears, mouth or feet touched. He wasn't very cute with very little hair and tear-stained eyes, but Danny patiently worked on the problem areas.

Fortunately, Danny discovered that Oscar would do almost anything for a treat. He also responded beautifully to praise, and soon became quite a show off. Despite his beauty-challenged problem, Oscar soon became a Project POOCH favorite. A fast learner and a people pleaser, he mastered tricks quickly. He craved interaction with people and cuddled up next to anyone sitting on the sofa. However, if a stranger came in, Oscar jumped off the sofa and charged them, which meant Danny had to work on this issue.

When people came to consider dogs for adoption, Oscar might as well have been invisible. He was just too ugly. He stayed month after month, learning new tricks and being the companion of his trainer and others in POOCH.

After eight long months, a couple decided to adopt Oscar. Although Danny wanted Oscar to find his forever home, he was sad when Oscar had to leave. Danny encouraged the adopters to bring Oscar back for regular grooming and anny additional training he might need. POOCH offers lifetime training for our dogs, which provides an opportunity for the youth to know that their dog is in a loving home, much like the one they wish for themselves.

Danny was thrilled when the adopters sent an email: "Oscar's been doing great. We've found he'll do almost anything for a taste of peanut butter. He expects to be treated like the king he is. He goes on frequent walks and gets pushed around in a cart at the building supply store. He's the happiest dog in the world and gets many compliments on how well behaved and handsome he is. I'm so gald he knows he's not "just a dog" and that he is family. I cannot begin to describe how thankful we are to have him as part of our family."

*Youth name has been changed for confidentiality purposes.

This year marked the 20th anniversary of Project POOCH! We celebrated this landmark event last month with our annual fundraiser, POOCH in the Pub 2013. Two former youth from the program spoke at the event about how Project POOCH changed their lives and what they are doing now. One is currently pursuing his master's degree and raising a family. The other has just returned from military duty in the middle east and is now beginning film school. Attendees enjoyed an evening of food and fun while supporting youth and dogs in need. One guest wrote, "The testimonial from the two graduates of the program was by far the highlight; very moving." Thank you to everyone who donated and attended! 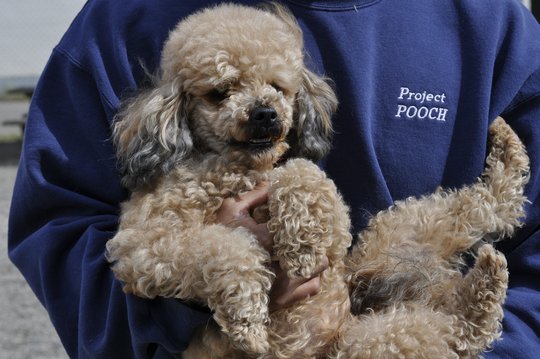 Seventeen years ago, Gabriel was barely a teenager when he became incarcerated. He took to working with dogs that had issues because he also had issues. Like many teenagers who get locked up in a correctional facility, they find the consistency and learning that every behavior has a consequence is a good thing. How to trust humans after being abused takes longer.

After joining Project POOCH (positive opportunities--obvious change with hounds), Gabriel learned that dogs are non-judgmental and they made him smile when they greeted him upon arrival at the kennel. One of Gabriel's favorite dogs was Bandit. Bandit taught Gabriel to trust because Bandit was trusting Gabriel. Gabriel learned that caring for a dog is much like caring for a child--they require that their physical and emotional needs be met if they are to thrive and become healthy in body and mind.

With children of his own now, Gabriel practices many of the lessons he learned by working with dogs. He is employed and plans to continue his education.

Help us help more youth and dogs by donating to Project POOCH.

‹ 1 ... 8 9 10 11 12 13 14 15 ... 18 ›
WARNING: Javascript is currently disabled or is not available in your browser. GlobalGiving makes extensive use of Javascript and will not function properly with Javascript disabled. Please enable Javascript and refresh this page.